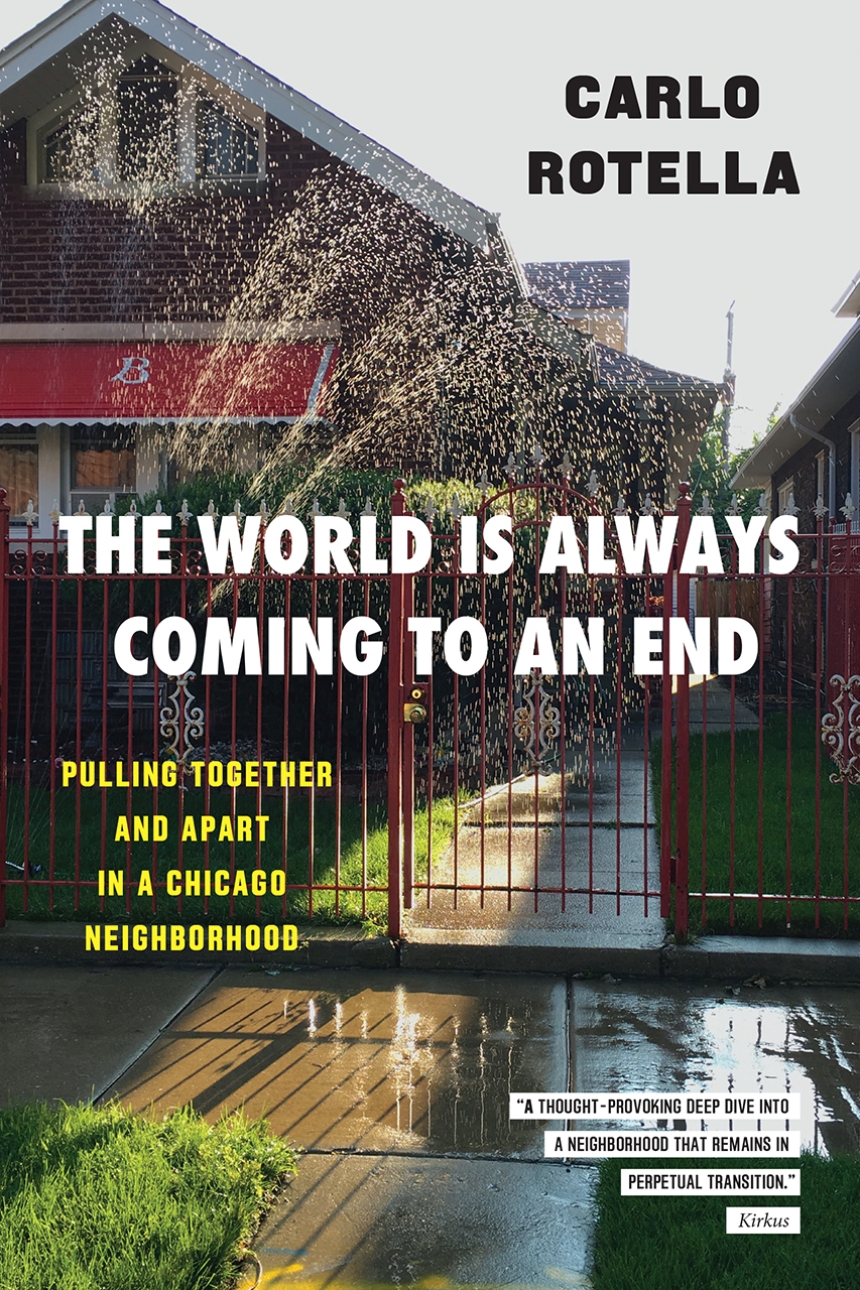 The World Is Always Coming to an End

Pulling Together and Apart in a Chicago Neighborhood

The World Is Always Coming to an End

Pulling Together and Apart in a Chicago Neighborhood

An urban neighborhood remakes itself every day—and unmakes itself, too. Houses and stores and streets define it in one way. But it’s also people—the people who make it their home, some eagerly, others grudgingly. A neighborhood can thrive or it can decline, and neighbors move in and move out. Sometimes they stay but withdraw behind fences and burglar alarms. If a neighborhood becomes no longer a place of sociability and street life, but of privacy indoors and fearful distrust outdoors, is it still a neighborhood?

In the late 1960s and 1970s Carlo Rotella grew up in Chicago’s South Shore neighborhood—a place of neat bungalow blocks and desolate commercial strips, and sharp, sometimes painful social contrasts. In the decades since, the hollowing out of the middle class has left residents confronting—or avoiding—each other across an expanding gap that makes it ever harder for them to recognize each other as neighbors. Rotella tells the stories that reveal how that happened—stories of deindustrialization and street life; stories of gorgeous apartments with vistas onto Lake Michigan and of Section 8 housing vouchers held by the poor. At every turn, South Shore is a study in contrasts, shaped and reshaped over the past half-century by individual stories and larger waves of change that make it an exemplar of many American urban neighborhoods. Talking with current and former residents and looking carefully at the interactions of race and class, persistence and change, Rotella explores the tension between residents’ deep investment of feeling and resources in the physical landscape of South Shore and their hesitation to make a similar commitment to the community of neighbors living there.

Blending journalism, memoir, and archival research, The World Is Always Coming to an End uses the story of one American neighborhood to challenge our assumptions about what neighborhoods are, and to think anew about what they might be if we can bridge gaps and commit anew to the people who share them with us. Tomorrow is another ending.

"The World Is Always Coming to an End is unlike any work of contemporary urban studies that I know. It combines elements of journalism, archival research, ethnography, and memoir in a study of South Shore—the South Side, Chicago, neighborhood in which Carlo grew up, in the 1970s. It’s at times lyrical, at times analytic, and always engaging."

"An evocative and engaging mix of the minutely personal, the more broadly ethnographic, and the sociological in its description and analysis of a complex and interesting slice of Chicago. Rotella, who also works in long-form journalism, brings his gifts as a writer to bear on his experience of place and the terms of place itself."

"An ambitious analysis of a singular neighborhood that in some ways serves as a microcosm for all urban neighborhoods. . . . The author offers a nuanced narrative, partly personal and partly sociological, that keeps circling back to the same important truths about race, class, community, poverty, and crime. A thought-provoking deep dive into a neighborhood that remains in perpetual transition."

"The neighborhoods of our childhood still live within us, shaping our perceptions of the world today. Carlo Rotella brings alive the past and present of his own neighborhood effect in the historic South Shore of Chicago. A unique mix of personal memoir, journalism, and scholarly research, this book unites the obsessions, fears, and pleasures that the places we inhabit inspire. The South Shore community, variously challenged by deindustrialization, racial and class tension, gangs, the hollowing out of the middle class, and dysfunctional leaders, is coming to an end according to its residents. But South Shore remains a place of physical beauty and pride of place to many, and the narrative of decline has always existed and always will--there as elsewhere. Rotella brilliantly dissects this paradox, in the process giving us what he calls equipment for living. His experiences conjure the reader’s own lost cities, making the book reach far beyond Chicago."

"Carlo Rotella has given us a rich, incisive portrait of social change in Chicago's iconic South Shore neighborhood. Remarkably, this portrait also delivers sensitive personal meditations on community, safety and peril, race and class relations, the meaning of home, and more. The World Is Always Coming to an End is valuable urban history with the soul of a memoir."

"The World is Always Coming to an End is an investigation of a city in continual flux, the roiling tensions of race and class and respectability in wherever one calls home. It's a powerful account that uses South Shore to capture both the story of Chicago (and through it, industrial and post-industrial cities nationwide) and what it means to be a neighborhood. Rotella--as a journalist but also as a memoirist--delves into the significance of the bungalow, academic studies of South Shore, recollections of the first Mayor Daley and childhood dangers, a current resident's cache of guns, another's talk of riffraff and the efforts to stop integration a half-century earlier. All of this comes together to create a neighborhood in all its spectacular complexity and contradictions."

"This book is an unusually personal urban ethnography. As a sociologist myself, I find The World is Always Coming to an End] wonderfully insightful and thought provoking. Rotella interweaves multiple histories: national, city, South Shore, and personal. He effectively uses long-time residents' life stories and their often-pungent words to paint a portrait of the neighborhood’s past and present. He makes the amusing but accurate observation that residents’ (including himself) sense of being on the alert for trouble, and their enthusiasm for concealed carry and guns in general, seem to come as much from pulp fiction as from the actual threat of crime."

"It's fair to call Rotella a poet of urban life, alive to the freedom that cities offer us to pursue lives of our own devising, and of masculinity and the ways men lose and find themselves in their passions."

National, on Playing in Time

"Some books take a while to draw you in. But when I’d finished the first paragraph of Carlo Rotella’s The World Is Always Coming to an End: Pulling Together and Pulling Apart in a Chicago Neighborhood, I knew that I was going to love it."

"Carlo Rotella was a toddler in the late 1960s and left South Shore forty years ago, but the neighborhood remains part of him. In The World Is Always Coming to an End he explores the notion of community in a place he envisions most other American cities will look like 'when we’re done reversing the postwar expansion of the middle class.'"