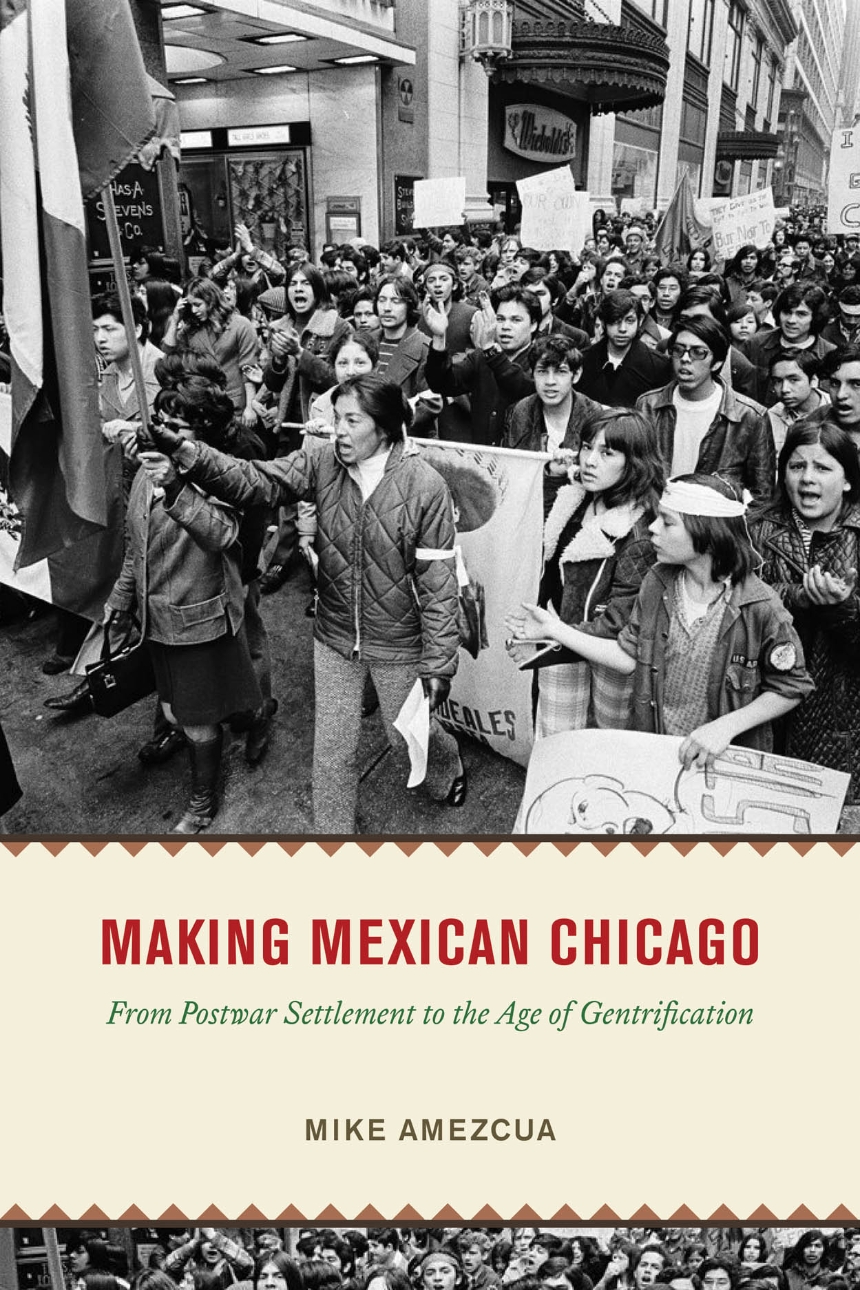 From Postwar Settlement to the Age of Gentrification

From Postwar Settlement to the Age of Gentrification

An exploration of how the Windy City became a postwar Latinx metropolis in the face of white resistance.

Though Chicago is often popularly defined by its Polish, Black, and Irish populations, Cook County is home to the third-largest Mexican-American population in the United States. The story of Mexican immigration and integration into the city is one of complex political struggles, deeply entwined with issues of housing and neighborhood control. In Making Mexican Chicago, Mike Amezcua explores how the Windy City became a Latinx metropolis in the second half of the twentieth century.

In the decades after World War II, working-class Chicago neighborhoods like Pilsen and Little Village became sites of upheaval and renewal as Mexican Americans attempted to build new communities in the face of white resistance that cast them as perpetual aliens. Amezcua charts the diverse strategies used by Mexican Chicagoans to fight the forces of segregation, economic predation, and gentrification, focusing on how unlikely combinations of social conservatism and real estate market savvy paved new paths for Latinx assimilation. Making Mexican Chicago offers a powerful multiracial history of Chicago that sheds new light on the origins and endurance of urban inequality.

“Making Mexican Chicago is a superb analysis of race, property, and political power, with careful attention to the ways communities galvanize power across the twentieth century. Amezcua artfully exposes the ways that Mexicans and Mexican-Americans articulated their needs in a hostile and racist city through a variety of strategies—from coalition building to embracing capitalism to radical refusal. Amezcua makes visible how Chicago stood at the center of the transnational histories of Mexican migration and labor, the US immigration enforcement apparatuses, and the identification of Mexican-Americans as both the problem and solution during periods of change in urban centers. An outstanding contribution to urban history.”

“The story of the American city and its urban transformation is often told from the top down and within a black-white binary. With sophistication and care, Amezcua upends this narrative, surfacing the previously untold story of how Latinos shaped Chicago’s urban landscape and offering keen insights on culture, from beauty pageants to punk. After reading this book, we will wonder how we ever could have overlooked the role of Latinos in white flight, the rise of conservatism, and gentrification.”

Natalia Molina, author of How Race Is Made in America: Immigration, Citizenship, and the Historical Power of Racial Scripts

“How did Chicago become one of the largest Mexican cities in the United States? In this fresh account of immigration, real estate, community organization, and politics, Amezcua moves beyond a simple narrative of repression and resistance and shows how Mexicans—as victims of discrimination but also as property owners, landlords, and grassroots activists—remade the city.”

“A superb addition to the growing body of work on the history of Latinx Chicago. Amezcua offers a nuanced story of the politics of place and space, using the history of housing, displacement, and urban renewal to explore broader patterns of urban change and the evolving strategies of a marginalized group in gaining access to power.”