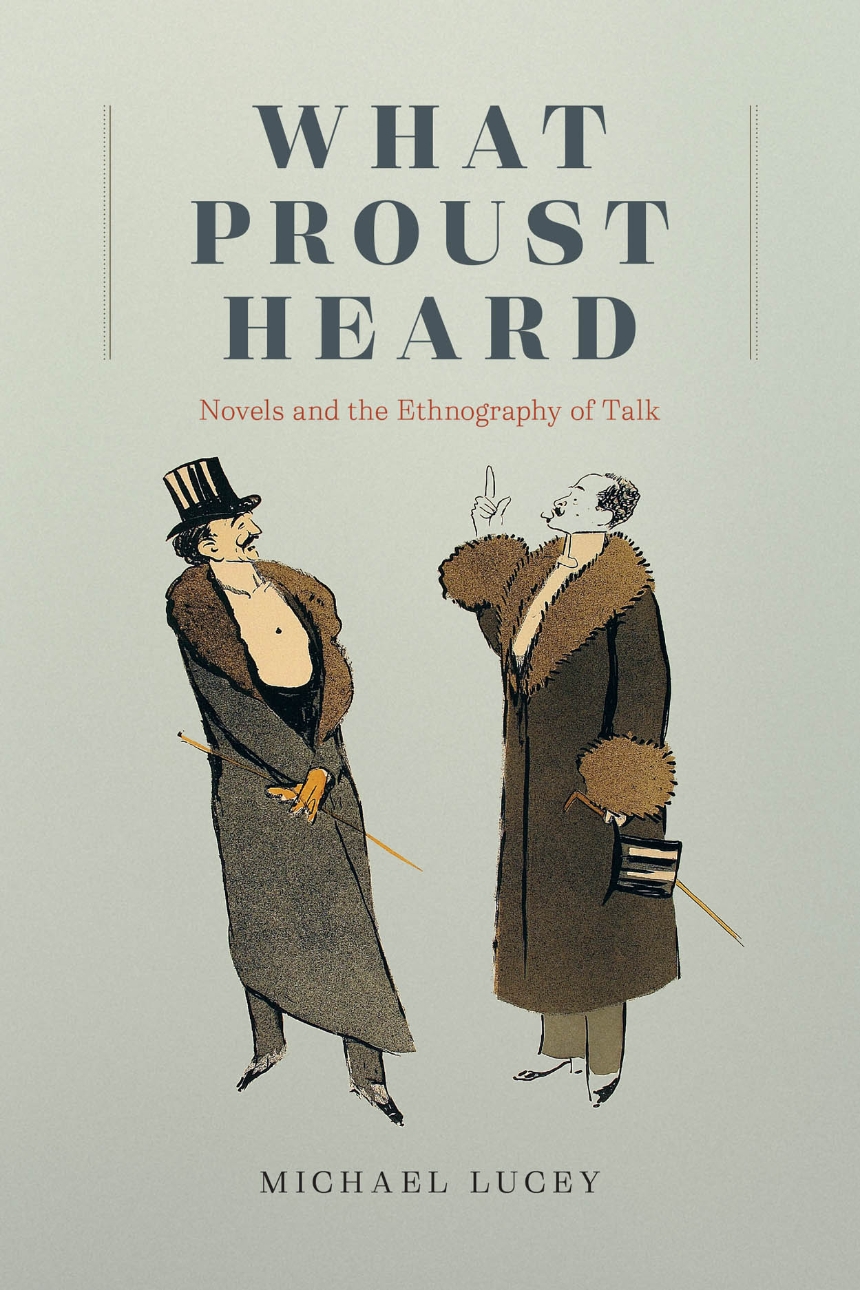 Novels and the Ethnography of Talk

Novels and the Ethnography of Talk

What happens when we talk? This deceptively simple question is central to Marcel Proust’s monumental novel In Search of Lost Time. Both Proust’s narrator and the novel that houses him devote considerable energy to investigating not just what people are saying or doing when they talk, but also what happens socioculturally through their use of language. Proust, in other words, is interested in what linguistic anthropologists call language-in-use.

Michael Lucey elucidates Proust’s approach to language-in-use in a number of ways: principally in relation to linguistic anthropology, but also in relation to speech act theory, and to Pierre Bourdieu’s sociology. The book also includes an interlude after each of its chapters that contextualizes Proust’s social-scientific practice of novel writing in relation to that of a number of other novelists, earlier and later, and from several different traditions, including Honoré de Balzac, George Eliot, Virginia Woolf, Nathalie Sarraute, and Rachel Cusk. Lucey is thus able to show how, in the hands of quite different novelists, various aspects of the novel form become instruments of linguistic anthropological analysis. The result introduces a different way of understanding language to literary and cultural critics and explores the consequences of this new understanding for the practice of literary criticism more generally.

“What Proust Heard is the work of a scholar at the peak of his powers. Lucey offers an entirely new reading of Proust. This book helps us understand what novels—particularly Proust’s extraordinary novel of novels—can do to register and create social worlds. The result is a new genre of literary criticism that helps us understand how and why we experience reading (of all things) as a conversation outside our own heads.”

“Michael Lucey, an essayist esteemed for ground-breaking work on Balzac, Gide, Proust, and Colette, has opened up the world of literary criticism once again, this time through a rigorous investigation of the field of linguistic anthropology. That in itself is news.  But the real achievement here is the way his synthesis of the two fields enables him to analyze the use of conversation in fiction, in authors with very different styles and intentions: Proust, Sarraute, and brilliantly, Rachel Cusk.  I’ll never read or hear any of them the same way again.”

“From the formal patterns of Vinteuil’s musical compositions to the cries of the Paris street traders, what Proust heard and what with him the reader of A la recherche du temps perdu encounters, is one of the richest sound worlds of fiction since Rabelais. Above all there are the multiple registers of human speech, to the analysis of which Michel Lucey brings the conceptual tools of sociology and anthropology in the elaboration of what he calls an ‘ethnography of talk’. His account is a veritable tour de force in its mix of theoretical sophistication and close-up auditory attentiveness. It is a major contribution to our understanding of Proust’s great novel and more generally of the functioning of the novel as a literary genre. It is, in short, indispensable listening matter.”

"It is this Proust—the listener more than the dreamer—who interests Michael Lucey. The Proust Lucey evokes in What Proust Heard is a certain type of listener, someone who attends not only to words but also to how words function in particular interactions — what Lucey calls 'language-in-use.'"