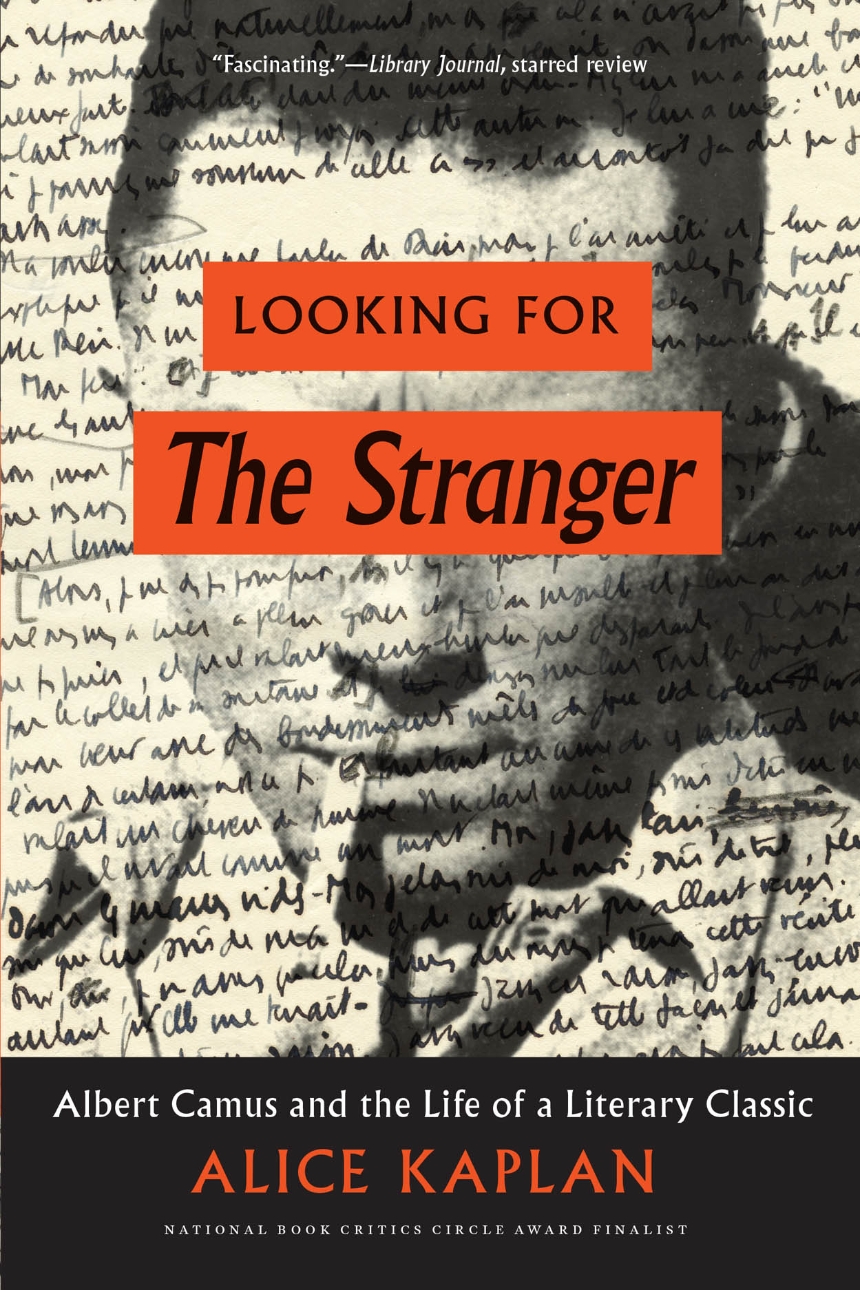 Looking for The Stranger

Albert Camus and the Life of a Literary Classic

Looking for The Stranger

Albert Camus and the Life of a Literary Classic

The Stranger is a rite of passage for readers around the world. Since its publication in France in 1942, Camus’s novel has been translated into sixty languages and sold more than six million copies. It’s the rare novel that’s as at likely to be found in a teen’s backpack as in a graduate philosophy seminar. If the twentieth century produced a novel that could be called ubiquitous, The Stranger is it.

How did a young man in his twenties who had never written a novel turn out a masterpiece that still grips readers more than seventy years later? With Looking for “The Stranger”, Alice Kaplan tells that story. In the process, she reveals Camus’s achievement to have been even more impressive—and more unlikely—than even his most devoted readers knew.

Born in poverty in colonial Algeria, Camus started out as a journalist covering the criminal courts. The murder trials he attended, Kaplan shows, would be a major influence on the development and themes of The Stranger. She follows Camus to France, and, making deft use of his diaries and letters, re-creates his lonely struggle with the novel in Montmartre, where he finally hit upon the unforgettable first-person voice that enabled him to break through and complete The Stranger.

Even then, the book’s publication was far from certain. France was straining under German occupation, Camus’s closest mentor was unsure of the book’s merit, and Camus himself was suffering from near-fatal tuberculosis. Yet the book did appear, thanks in part to a resourceful publisher, Gaston Gallimard, who was undeterred by paper shortages and Nazi censorship.

The initial critical reception of The Stranger was mixed, and it wasn’t until after liberation that The Stranger began its meteoric rise. As France and the rest of the world began to move out of the shadow of war, Kaplan shows, Camus’s book— with the help of an aggressive marketing campaign by Knopf for their 1946 publication of the first English translation—became a critical and commercial success, and Camus found himself one of the most famous writers in the world. Suddenly, his seemingly modest tale of alienation was being seen for what it really was: a powerful parable of the absurd, an existentialist masterpiece.

Few books inspire devotion and excitement the way The Stranger does. And it couldn’t have a better biographer than Alice Kaplan, whose books about twentieth-century French culture and history have won her legions of fans. No reader of Camus will want to miss this brilliant exploration.

"To this new project, Kaplan brings equally honed skills as a historian, literary critic, and biographer. . . . In an epilogue, Ms. Kaplan goes a step further and looks for the identity of the Arab involved in the real-life altercation that inspired the novel's pivotal scene. What she learns about him is fascinating, and how she writes about parallels between him and Camus is a lovely example of her own imaginative powers and stylish prose. . . . Reading The Stranger is a bracing but somewhat bloodless experience. Ms. Kaplan has hung warm flesh on its steely bones."

"An absorbing account of the making of The Stranger. For American readers, few French novels are better known, and few scholars are better qualified than Kaplan to reintroduce us to it. The author of several fine biographies of French and American writers, as well as the ravishing memoir French Lessons, Kaplan here sets herself the task of writing a biography of a book. . . . Kaplan tells this story with great verve and insight, all the while preserving the mystery of its creation and elusiveness of its meaning. . . . While some might question Kaplan’s claim that the novel 'changed the course of modern literature' few will ever question either the work's perennial appeal or the brilliance with which Kaplan has told its story."

"Kaplan's research is exhaustive (she includes an extensive bibliography), her tone is conversational, and her analyses convincing and often surprising. . . . Kaplan is a superb storyteller. One of the best chapters of the book, 'Gallimard's War', reads like a philosophical thriller with its Nazi censors, misunderstandings, and moral conundrums. Yet, through all this she never loses focus on the novel to which her book is dedicated. . . .  Equally engaging are her chapters documenting the initial reception of the book in both the French- and English-speaking world. . . . Surely destined to become the quintessential companion to Camus's most enduring novel."

"The fascinating story behind Albert Camus' coldblooded masterpiece. . . . A swiftly told, deeply researched literary investigation. . . . While she doesn't offer any final interpretation, her detective work deepens the understanding of a work whose power resides as much in what it doesn't say as what it does. A compelling companion to a novel that has stayed strange."

“Kaplan’s history charts the success of Camus’s debut novel, which is an astonishing tale. It was published in the most unpropitious circumstances, during the Nazi Occupation. Kaplan is particularly brilliant at showing the ways in which the novel was refracted in reading. L’Étranger has been called a ‘colonial allegory, an existential prayer book, an indictment of conventional morality, a study in alienation, or a Hemingway rewrite of Kafka’"

"Stellar. . . . A fascinating mix of straight fact--she names the bells that inspired the one that rings in the novel's verdict scene--and astute psychological inference. . . .  Though it's left unsaid, Looking for The Stranger is also a wistful reminder of the vital role novels and criticism played in our culture not so very long ago (The Stranger went on to sell millions after Sartre endorsed it in a review)--a role that's sadly almost unimaginable today."

"Thoroughly enjoyable, and filled with fascinating thoughts and insights. A wonderfully elegant investigative journey, leading us from the first spark to the afterlife of Camus's novel."

Sarah Bakewell, author of At the Existentialist Cafe

"It might seem that there's nothing left to say about Albert Camus's The Stranger: its bones have been scavenged by foes and fans alike, Camus’s story of Meursault recently the subject of a successful novel and movie. But scholar Alice Kaplan's Looking for The Stranger reveals a seductively manipulated story, every scintilla of its plot derived from real life or from prior literature: James Cain’s The Postman Always Rings Twice, Camus claimed, was the strongest influence on his novel, which is based on the absurd, not on existentialism after all. Like most fiction, The Stranger was built upon narrative truths, and, for the first time, the identity of the manshot by Meursault is revealed, no longer condemned to be the nameless Arab. Graceful yet demanding, Looking for "The Stranger" shows how thoroughly Camus made art out of his life.”

Laura Claridge, author of The Lady with the Borzoi

"With the same seriousness and wit that we find in all her books, Alice Kaplan has written the most unexpected biography possible: the one of a novel in the making. Looking for "The Stranger" is an engaging investigation as well as an enthralling essay about a cornerstone of modern literature, one of the most influential novels of the twentieth century, and the best selling mass market paperback in French publishing history. The role of journalism, the influence of American literature, the philosophical debate about the absurd, the colonial context: Alice Kaplan is giving all the elements that make up Albert Camus's masterpiece and that are essential to the reader's deep understanding of an era. It is an immense pleasure to follow her as she unravels masterfully all the threads of the tapestry, until the final revelation.:

Laure Murat, author of The Man Who Thought He Was Napoleon

"Alice Kaplan has written a gripping biography--not of a modern French writer, as she did in The Collaborator and The Interpreter, but of a modern French novel.  With her trademark combination of archival research, personal investigation, and interpretive skill, she tells the story of Camus’s The Stranger from its first stirrings in the mind of its young, unknown author through its publication in wartime France and its role in transforming Camus into an international literary star, to its postwar fame and enduring life and afterlife. Looking for "The Stranger", which itself often reads like a novel, will thrill anyone who has read Camus’s masterpiece and entice others to do so."

"Alice Kaplan has written the life story of one of the essential and enduring books of the twentieth century, and with it she gives us a page-turner of scholarship, a work of narrative power and historical resonance, right up to the present moment. The Stranger has found its greatest friend."

Patricia Hampl, author of I Could Tell You Stories