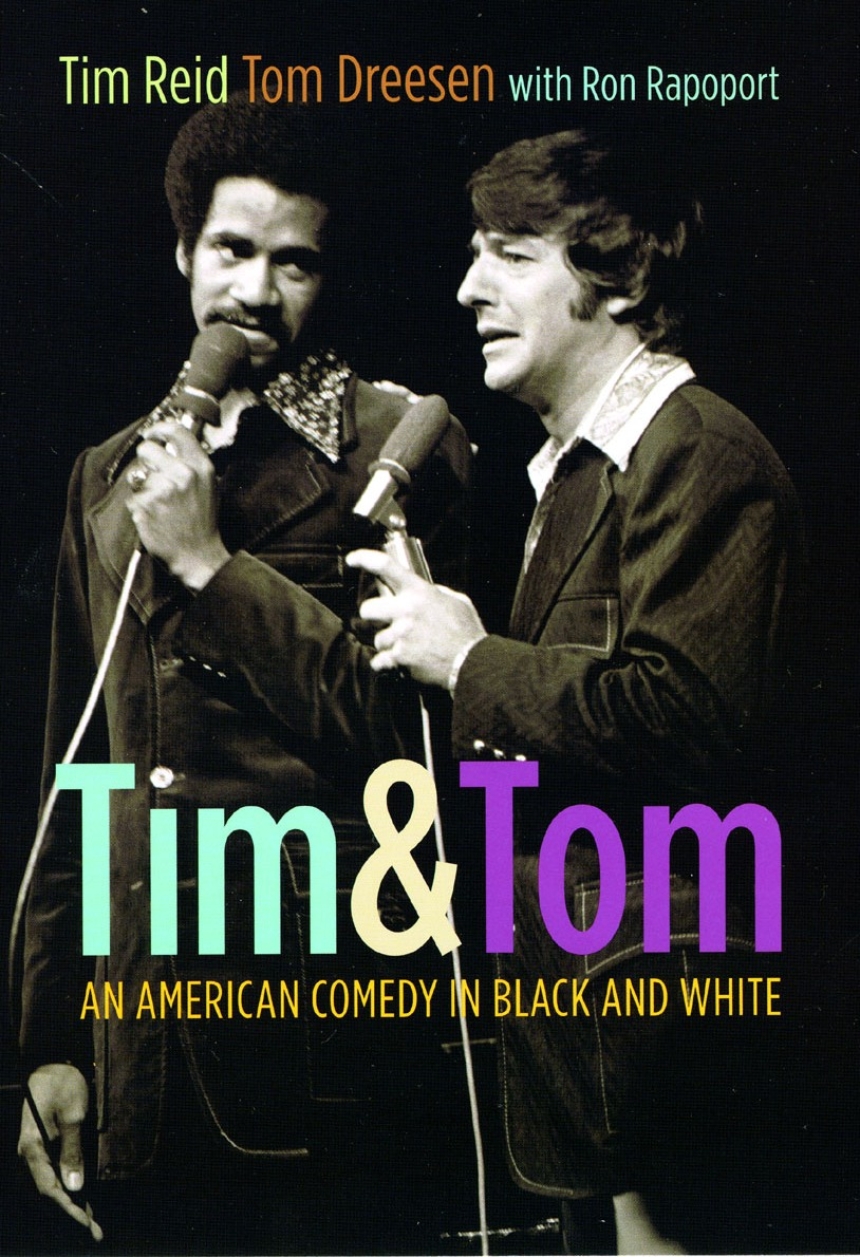 An American Comedy in Black and White

An American Comedy in Black and White

As the heady promise of the 1960s sagged under the weight of widespread violence, rioting, and racial unrest, two young men--one black and one white--took to stages across the nation to help Americans confront their racial divide: by laughing at it.
Tim and Tom tells the story of that pioneering duo, the first interracial comedy team in the history of show business--and the last. Tim Reid and Tom Dreesen polished their act in the nightclubs of Chicago, then took it on the road, not only in the North, but in the still-simmering South as well, developing routines that even today remain surprisingly frank--and remarkably funny--about race. Most nights, the shock of seeing an integrated comedy team quickly dissipated in uproarious laughter, but on some occasions the audience’s confusion and discomfort led to racist heckling, threats, and even violence. Though Tim and Tom perpetually seemed on the verge of making it big throughout their five years together, they grudgingly came to realize that they were ahead of their time: America was not yet ready to laugh at its own failed promise.
Eventually, the grind of the road took its toll, as bitter arguments led to an acrimonious breakup. But the underlying bond of friendship Reid and Dreesen had forged with each groundbreaking joke has endured for decades, while their solo careers delivered the success that had eluded them as a team. By turns revealing, shocking, and riotously funny, Tim and Tom unearths a largely forgotten chapter in the history of comedy.

“I have known Tim Reid and Tom Dreesen as comedians and friends since 1975, but I never knew Tim and Tom, the comedy team. This book is four compelling stories in one compilation: One story about Tim Reid, sad, fascinating and uplifting. One story about Tom Dreesen, a man consumed by a goal and a great witness to a bygone era of show business that one can’t help but long for. A third story about seeking recognition in the world of entertainment. And finally, a story about race and culture in a country that should have been farther down the road to understanding, tolerance and human kindness than it was in the 1970s. Tim and Tom is a great story, the best kind of story, well told, about two men struggling to prove themselves. This entertaining book offers many meaningful lessons and vivid reflection.”

“Part showbiz survival 101, part civil rights testimony, the story of Tim and Tom is a moving chronicle of the courage, conviction and commitment it took to wade through floods of bigotry and bias with bell-bottoms. Although racism is no laughing matter, Tim and Tom proved that a little humanity and humor can go a long way to reminding us that people are more alike than we are different.”

"In this eye-opening dual biography of the first and only interracial American comedy team, Reid and Dreesen share their own unique upbringings—overcoming the stigmas of poverty and prejudice and through sheer determination making a difference in many people’s lives through a shared talent to entertain and educate.  . . . A heartfelt memoir and a nice capsule history of growing up different, fighting the odds, and becoming successful on one’s own terms, this is recommended for all libraries."

“Tim Reid and Tom Dreesen are my close friends for whom I’ve always had the greatest respect, and after reading the book I realize why. A white boy who was one of eight children raised on the south side of Chicago and a ‘Brotha’ who is an only child raised in Norfolk, Virginia, somehow get together and become America’s first black and white comedy team? The year 2008? No, sir—1969. Adversity, Disagreements, Pain, Love, Friendship, Brotherhood. It’s all there. I couldn’t put the book down.”

“The story of these remarkable entertainers’ Hollywood beginnings is a fabulous and funny read. Tim and Tom is not to be missed. Someone once said, ‘Laughter is jogging for the insides.’ So this book will not only make you happy—you’ll be healthier, too.”

"A beautiful and beautifully told story of two men of character in a tough and unforgiving business who broke barriers with laughter."

"Tim and Tom’s story is a tale of their times—the late ’60s and early ’70s, when racial issues were at the forefront of the national dialogue—and our times, when the country still struggles with many of the same questions."

"[In Tim & Tom] Rapaport weaves together often-funny and just-as-often-painful stories in a terrific look at friendship, perseverance and a country that should have been more ready for them than it was."

"A rollicking, funny read, populated with colorful characters. . . . But it is tempered by heartache and frustration."

"This book is not only entertaining, honest and enlightening, but a must-read for young people who do not know what these men endured just 35 years ago on stage across America."