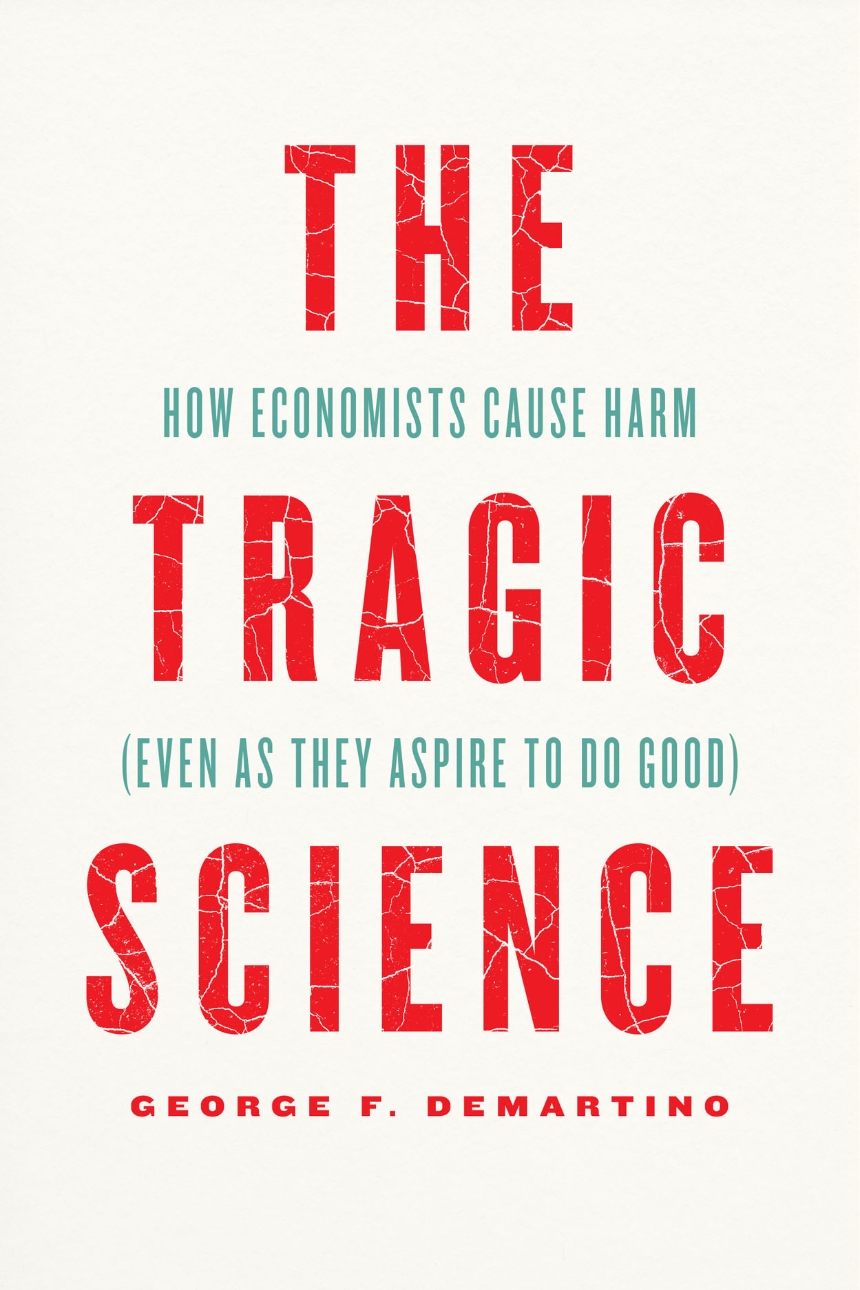 How Economists Cause Harm (Even as They Aspire to Do Good)

How Economists Cause Harm (Even as They Aspire to Do Good)

A forceful critique of the social science that has ruled—and damaged—the modern world.

The practice of economics, as economists will tell you, is a powerful force for good. Economists are the guardians of the world’s economies and financial systems. The applications of economic theory can alleviate poverty, reduce disease, and promote sustainability.

While this narrative has been successfully propagated by economists, it belies a more challenging truth: economic interventions, including those economists deem successful, also cause harm. Sometimes the harm is manageable and short-lived. But just as often the harm is deep, enduring, and even irreparable. And too often the harm falls on those least able to survive it.

In The Tragic Science, George F. DeMartino says what economists have too long repressed: that economists do great harm even as they aspire to do good. Economist-induced harm, DeMartino shows, results in part from economists’ “irreparable ignorance”—from the fact that they know far less than they tend to believe they know—and from disciplinary training that treats the human tolls of economic policies and interventions as simply the costs of promoting social betterment. DeMartino details the complicated nature of economic harm, explores economists’ frequent failure to recognize it, and makes a sobering case for professional humility and for genuine respect for those who stand to be harmed by economists’ practice.

At a moment in history when the economics profession holds enormous power, DeMartino’s work demonstrates the downside of its influence and the responsibility facing those who practice the tragic science.

"Economics may be the science of trade-offs, yet economists are too ready to sweep under the rug the ethical trade-offs their practice entails. As DeMartino argues, these trade-offs arise both because economists claim more knowledge than they actually possess and because their preferred policies often cause irreparable harm for some people. DeMartino lays out a profoundly challenging agenda for economists—one for which there are no simple remedies yet must be confronted nevertheless."

"DeMartino sounds the alarm on how much damage economists can do out of paternalism and hubris. He issues a clarion call for economists to embrace ethical principles that oblige them to consider the harm they may do."

William Easterly, author of The Tyranny of Experts: Economists, Dictators, and the Forgotten Rights of the Poor

"This thoughtful dissection of the moral hubris of economics reveals simplistic and self-serving assumptions. Rather than offering some magical cure, it points to the need for greater ethical engagement with the often perilous practices of economic policy."

Nancy Folbre, author of The Rise and Decline of Patriarchal Systems: An Intersectional Political Economy

Virtuous economists aspire to do God’s work—to promote social betterment. Economists ranging from Karl Marx to John Maynard Keynes to the high priests of the Chicago School placed their science in the service of human salvation. Robert Nelson is right to identify economics as a secular religion led by those hoping to achieve heaven on earth. But economists’ practice also contributes to harm. The harm can be severe, even devastating. Sometimes it destroys lives. Regrettably, the risk of harming is ineliminable from economic practice. This is the tragedy of economics. It is a statement of fact. It is not an indictment of the profession.

Economists seeking to do good but who are aware of the harms their practice induces have looked for ways to manage the resulting cognitive dissonance. That’s understandable. It’s disturbing to realize you’re contributing to harm to so many you hope to help. Unfortunately, the predominant approach to resolving the moral dilemma is irresponsible. I’ll refer to that approach as economic “moral geometry.” Moral geometry represses the complexity of harm and insulates the profession morally from the harms people suffer because of the policies it advocates. Moral geometry entails seductive, unambiguous decision rules that dictate policy choice when all the available options threaten harm. Methods like cost-benefit analysis attempt to resolve deep moral questions—such as what kinds of harm are appropriate to impose on some members of society for the wellbeing of others—by way of simple math problems. Having done the math, the economist can assess policy without giving much thought to those the policy will harm. Moral geometry allows economists to sleep well while others suffer the consequences of their practice. Approaching harm in that way is reckless. That claim is an indictment.

Competent, well-meaning economists cause harm for two principal reasons. The first is that the economic policy interventions they advocate induce uneven impacts across society, and sometimes across national borders. This problem is widely recognized in the profession, and is explored in the fields of welfare economics and social choice theory. Like technological innovations that emerge from the initiatives of private individuals in the economy, consciously designed public policy that is intended to improve the human condition can disturb social arrangements upon which many depend. Schumpeter argued famously that capitalist development induces a “perennial gale of creative destruction.” So, too, can policy innovation. Typically, even the most promising economic policies have disparate effects on distinct groups of people. That insight led the “new welfare economists'' of the 1930s to see harm in every policy intervention. Uneven impact is the rule in complex economies where individuals inhabit dense webs of economic, social, and political relations. The problem of uneven impact would arise even if all economic actors wanted and valued the same things. The problem is substantially exacerbated in societies where there is heterogeneity across individuals in their desires and values. In the context of COVID-19, for instance, we have been reminded that some individuals prioritize personal autonomy over public health while others do not. Even were COVID-19 containment policy to have the same objective impact on all people, the impact would be experienced as beneficial by some but deeply harmful by others.

A second set of drivers of economist-induced harm has received far less attention than it deserves. It comprises the epistemic conditions under which economists operate. By “epistemic conditions'' I refer to what economists do and don’t know, and can and can’t know.
Economists confront the problem of what I call “irreparable ignorance.” They do not and cannot possibly know all they need to know to design interventions that avoid unanticipated consequences. The unforeseen consequences of economic interventions can be benign, and even beneficial. But they are often damaging. One important example involved Federal Reserve Chair Alan Greenspan in the years preceding the crisis of 2008. During his twenty-year tenure as chair, Greenspan used his immense influence to prevent tighter government regulation of financial markets at a time of substantial financial innovation involving new financial assets and trading strategies. He believed, right up until the financial implosion, that financial institutions could be counted on to regulate their own behavior. He was wrong. He acknowledged his error in testimony before the Government Oversight Committee of the US House of Representatives:

Looking back now, it is easy to infer that Greenspan overlooked obvious risks from freewheeling financial activities prior to 2008. But his error reveals a more fundamental problem in economics. Economic practice entails wrestling with the unknown and the unknowable. Greenspan’s error, widely shared by economists, was to believe he knew far more than he did. Greenspan failed to recognize that the larger the scale of an economic intervention—and keep in mind that decisions concerning financial regulation have global implications—the more severe is irreparable ignorance and the greater the chances for deep and extensive unintended harms. Economists often advocate very big interventions. “No other science,” Charles Plott correctly argues, “aspires to such difficult goals as influencing an entire economy or even controlling a single market.”

Epistemic insufficiency connects with economist-induced harm in various ways. Economists can’t know in advance how individuals and institutions will respond to economic policy interventions. Greenspan could not have known how financial institutions would exploit the freedom provided by light-touch government oversight, for instance. But the ultimate impact of policy interventions depends on those responses. Moreover, economists cannot know in advance how their work will be taken up by decision makers who formulate policy or applied by those empowered to administer policy. This gives economists an out that they regularly exploit when things go badly. “The science cannot be held accountable for how it is used or mistakes made when it is used.”

Is that the right inference to draw from the fact that noneconomists misuse economic theory? In fact, it isn’t. The correct inference is that economists, just like other experts, at best enjoy influence without control. Unfortunately, influence without control can be very dangerous. Think of a ten-year-old child behind the wheel of a Humvee, careening down Main Street. Does the child influence what happens next? Of course. But does that child control the ensuing events? Don’t bet your life on it, or especially the lives of others. I submit that this is exactly the right way to think about the situation facing an economist in the policy world who is trying to promote good economic outcomes. The greater the degree of influence without control, the greater the risk of inducing unintended harm. Let’s call it the Alan Greenspan problem. It follows that as economists substantially extended their influence over the course of the twentieth century, they also increased their capacity to exert unintended and unforeseen harm. And with that capacity comes greater responsibility on the part of the economics profession to wrestle with its moral duties to those who may be harmed by its practice.