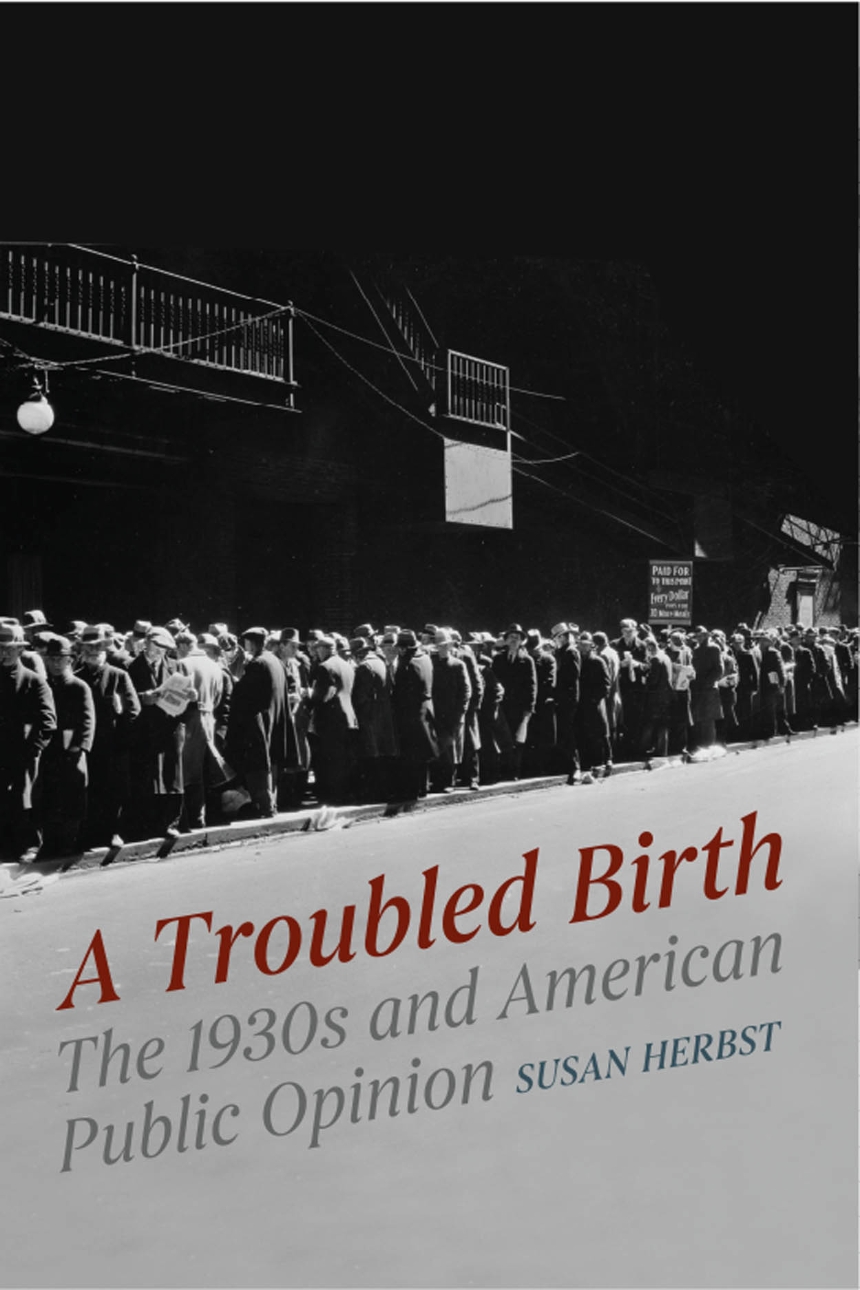 The 1930s and American Public Opinion

The 1930s and American Public Opinion

Pollsters and pundits armed with the best public opinion polls failed to predict the election of Donald Trump in 2016. Is this because we no longer understand what the American public is? In A Troubled Birth, Susan Herbst argues that we need to return to earlier meanings of "public opinion" to understand our current climate.

Herbst contends that the idea that there was a public—whose opinions mattered—emerged during the Great Depression, with the diffusion of radio, the devastating impact of the economic collapse on so many people, the appearance of professional pollsters, and Franklin Roosevelt’s powerful rhetoric. She argues that public opinion about issues can only be seen as a messy mixture of culture, politics, and economics—in short, all the things that influence how people live. Herbst deftly pins down contours of public opinion in new ways and explores what endures and what doesn’t in the extraordinarily troubled, polarized, and hyper-mediated present. Before we can ask the most important questions about public opinion in American democracy today, we must reckon yet again with the politics and culture of the 1930s.

"Herbst makes her case not in a single narrative but in a series of essays that circle around the subject...A Troubled Birth presents engaging portraits of America in the 1930s..."

"Herbst explores the forces that shape the amorphous thing known as “public opinion,” concerning herself with its quality more than its specific content."

"In A Troubled Birth, Susan Herbst, an eminent thought leader on public opinion in American democracy, helps us grapple with these tensions by taking us back to the formidable shaping of public opinion in the 1930s and the trappings that have followed us since...A Troubled Birth is a must‐read for anyone grappling with ideas of the American 'public' and how to assess public opinion in the face of so many social, technological, and political changes. Herbst masterfully weaves history with contemporary reality, encouraging her array of readers to reevaluate their own biases by looking at where they originated."

"Susan Herbst’s A Troubled Birth is an engaging and original analysis of American public opinion in the 1930s. This is not a book about the content of public opinion. Rather, it examines how a particular vision of the American public came into being during this turbulent and pivotal decade."

“Anyone looking to understand how US democracy ended up in its current troubled state of affairs will benefit from reading A Troubled Birth. Herbst has long been teaching us to reconsider what we mean by public opinion better than anyone, and she’s done it again masterfully here.”

“In this engaging and wide-ranging book, Herbst emphasizes the importance of broader cultural history in showing that the advent of scientific polling and pollsters in the 1930s did not merely offer a way to measure public opinion for the pursuit of American democracy.  For better or ill, they along with the mass media (radio and newspapers), economic crisis (and how individuals cope with it), President Franklin Roosevelt’s leadership and communication style, political divisions (including on race and immigration), debates in the academic world, entertainment and early “infotainment,” and other visible developments in the United States (and worldwide), that have their counterparts today, turned public opinion which had been relatively amorphous concept into a tangible, multifaceted, and contentious one. This is an illuminating and impressive work.”