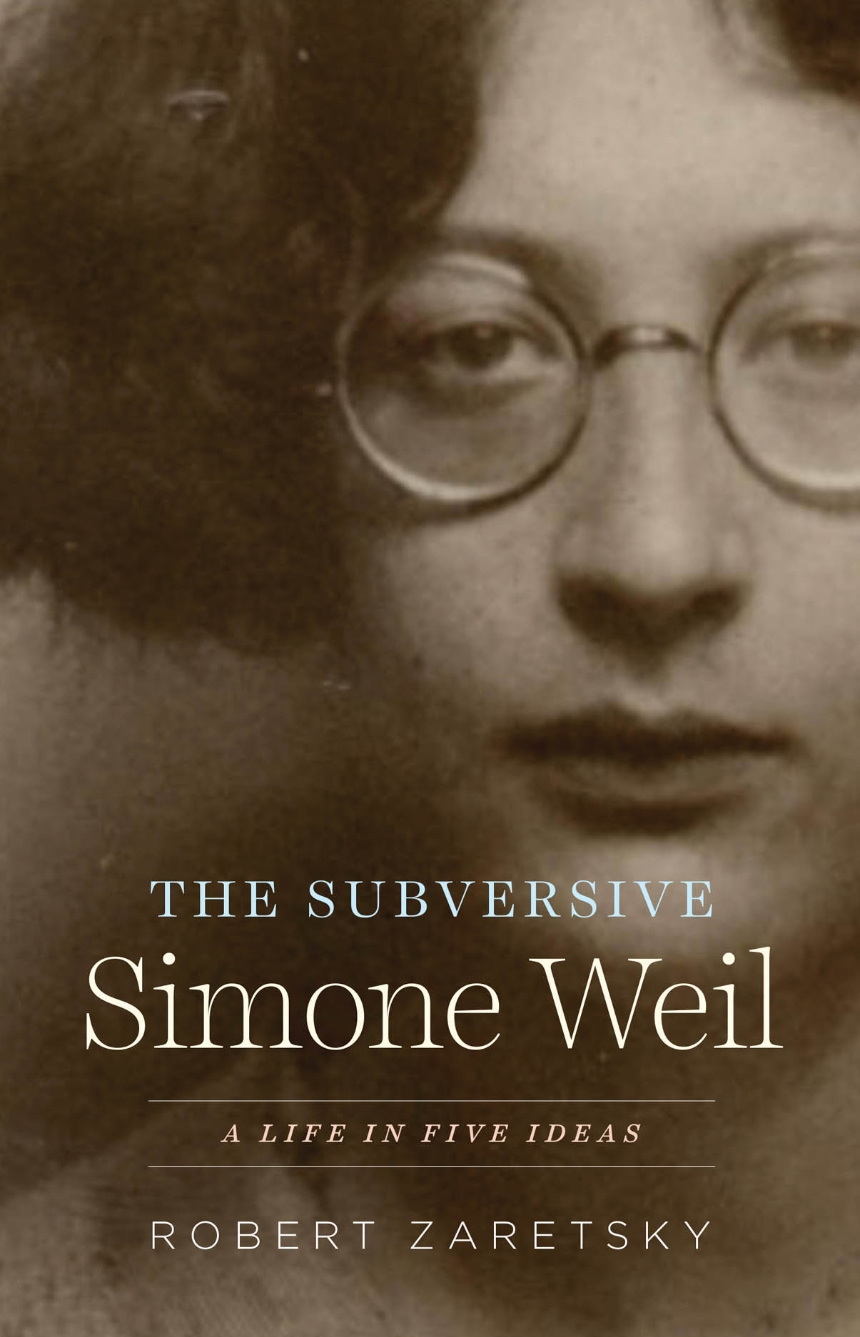 A Life in Five Ideas

A Life in Five Ideas

Known as the “patron saint of all outsiders,” Simone Weil (1909–43) was one of the twentieth century’s most remarkable thinkers, a philosopher who truly lived by her political and ethical ideals. In a short life framed by the two world wars, Weil taught philosophy to lycée students and organized union workers, fought alongside anarchists during the Spanish Civil War and labored alongside workers on assembly lines, joined the Free French movement in London and died in despair because she was not sent to France to help the Resistance.

Though Weil published little during her life, after her death, thanks largely to the efforts of Albert Camus, hundreds of pages of her manuscripts were published to critical and popular acclaim. While many seekers have been attracted to Weil’s religious thought, Robert Zaretsky gives us a different Weil, exploring her insights into politics and ethics, and showing us a new side of Weil that balances her contradictions—the rigorous rationalist who also had her own brand of Catholic mysticism; the revolutionary with a soft spot for anarchism yet who believed in the hierarchy of labor; and the humanitarian who emphasized human needs and obligations over human rights. Reflecting on the relationship between thought and action in Weil’s life, The Subversive Simone Weil honors the complexity of Weil’s thought and speaks to why it matters and continues to fascinate readers today.

“Robert Zaretsky’s The Subversive Simone Weil: A Life in Five Ideas elegantly captures its subject’s brief life and expansive thought in a schema that pays eloquent tribute to the continuing relevance of both.”

“[Zaretsky] is an admirably fluent and humble guide, who elucidates her writings; yet he doesn’t shy away from confessing that, at times, he’s baffled by her. Often she will make a claim that “compels as powerfully as it repels”, he notes. He grapples with Weil as she demands to be grappled with, not as a purely abstract thinker but as a singular voice demanding that we think and act with integrity.”

"This biography of an exceptional 20th-century thinker traces her inspirational experiences and philosophy. Zaretzky unveils Weil’s depth and seeming contradictions (rationalism and mysticism, revolution and belief) to explain her lasting appeal to readers."

“Zaretsky guides us through Weil’s complexities with impressive lucidity, keeping it lively and accessible, which is no small feat.”

“In clear, accessible prose, Zaretsky gives some coherence to Weil’s largely fragmentary oeuvre. What emerges is a portrait of a politically unclassifiable thinker who in her life and writings committed herself to be open to the unbearable reality around her.”

"This memorable survey delivers a rich portrait of the intellectual currents that shaped a one-of-a-kind thinker. Those curious about Weil’s work will find this to be a welcome place to start."

“It is hard to see how a figure so marvelously intemperate could ever be bridled to the satisfaction of the Anglo-American mainstream. Still, the intellectual historian Robert Zaretsky has made an impressive attempt to win over skeptics in his new book, The Subversive Simone Weil: A Life in Five Ideas. Somewhere between biography and philosophical overview, Zaretsky’s study sorts Weil’s views into five central categories. Each of the corresponding chapters integrates discussion of her personal eccentricities with analyses, rehabilitations, and critiques of her thought. . . . Weil may be subversive, but The Subversive Simone Weil is balanced and accessible.”

“Simone Weil was merciless (not least on herself), sometimes alarming, always compelling, and unavoidably significant.  This is a beautifully sharp and thoughtful account of her life and work—a fascinating read.”

"Zaretsky's work is unfailingly eloquent, fascinating, and relevant. In treating both her life and her writings, The Subversive Simone Weil displays a subject who, by going too far toward goodness, reminds so many of us that we have not gone far enough. In Zaretsky's hands, her courage stands as a complicated but necessary lesson for us all."

Todd May, author of A Decent Life: Morality for the Rest of Us

“Reading Zaretsky’s absorbing and tender intellectual portrait of Simone Weil, I was reminded on every page of her astonishing relevance to our own times. With her demanding vision of the life well lived, in her extreme judgments and through her punishing empathy, Weil emerges here as a figurehead for the intellectual and ethical challenges of the current moment. As he has done so beautifully in his books on Camus, Zaretsky has opened Weil’s life and work to our understanding. For readers familiar with Weil’s, The Subversive Simone Weil is a valuable synthesis; for those coming to her for the first time, an inspiring primer.”

Alice Kaplan, author of Looking for “The Stranger”: Albert Camus and the Life of a Literary Classic

"An unconventional introduction to the thought of Simone Weil: it is not a biography nor is it a straightforward exposition of her writings. Zaretsky is clearly enchanted by Weil’s philosophy and presents her ideas with clarity. But he also sees her faults, her impracticalities, and her contradictions. . . .Readers will come away with a basic understanding of Weil’s world view but not without wrestling with her ideas and their complications. Recommended."

Though this slim volume is commendable, it may not be what readers expect. It is an unconventional introduction to the thought of Simone Weil: it is not a biography nor is it a straightforward exposition of her writings. Zaretsky is clearly enchanted by Weil’s philosophy and presents her ideas with clarity. But he also sees her faults, her impracticalities, and her contradictions. Zaretsky focuses on five key elements of Weil’s philosophy: affliction, attention, resistance, roots, and God and the good. He explains and elaborates on Weil, but he also challenges her. Weil demanded that one live life by acting according to strict moral principles, principles that even she had difficulty fulfilling, sometimes because of her physical frailty. In the end, one understands why Zaretsky says he finds himself “in the untenable position of sharing [Weil's] ideas and yet being aware that they [often] cannot be, and perhaps should not be, acted upon” (p. 159). Zaretsky details the influences on her philosophy (particularly Plato and Kant), discusses parallels with other thinkers, and notes her influence on modern writers (notably Camus). Readers will come away with a basic understanding of Weil’s world view but not without wrestling with her ideas and their complications.

Chapter One    The Force of Affliction

Chapter Three    The Varieties of Resistance

Chapter Five    The Good, the Bad, and the Godly