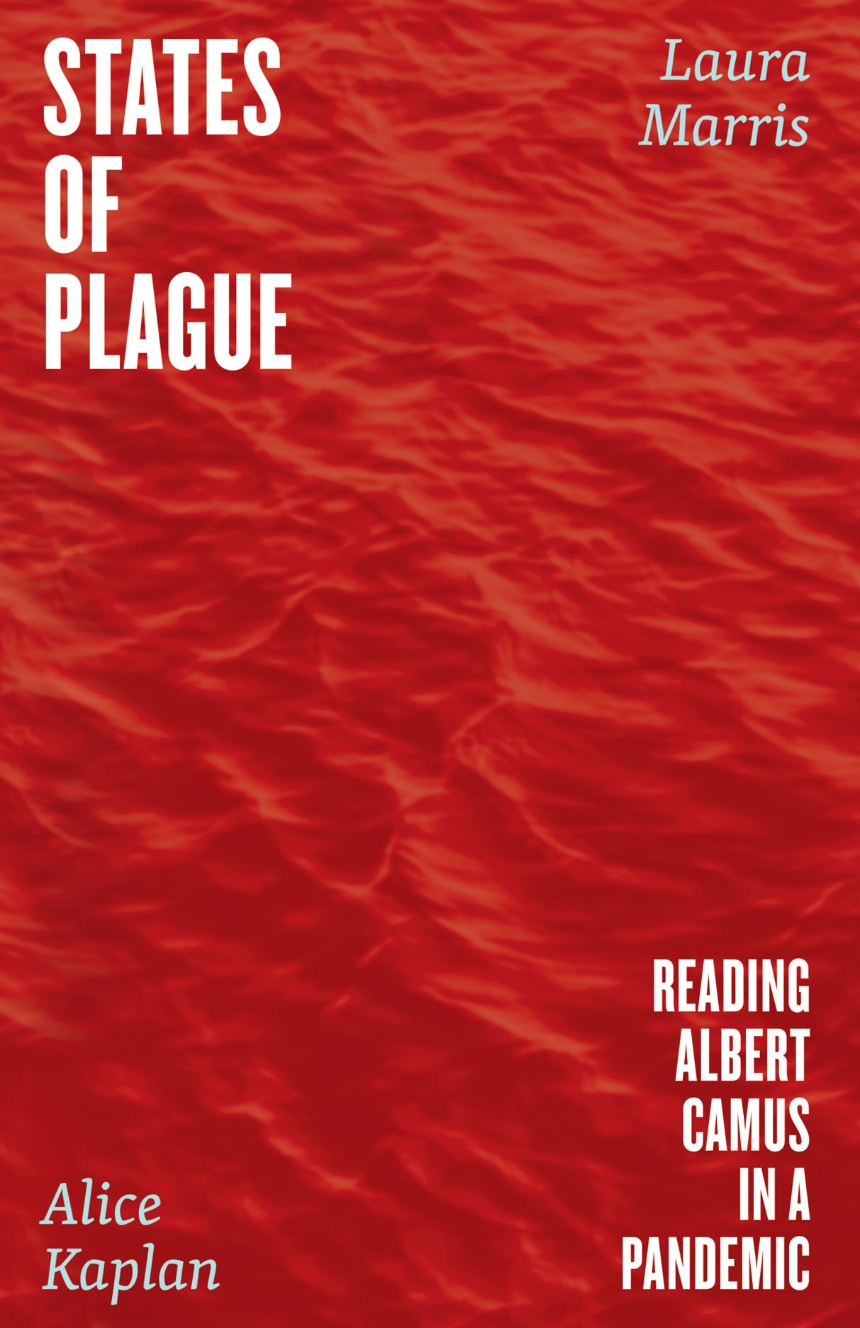 Reading Albert Camus in a Pandemic

Reading Albert Camus in a Pandemic

States of Plague examines Albert Camus’s novel as a palimpsest of  pandemic life, an uncannily relevant account of the psychology and politics of a public health crisis.

As one of the most discussed books of the COVID-19 crisis, Albert Camus’s classic novel The Plague has become a new kind of literary touchstone. Surrounded by terror and uncertainty, often separated from loved ones or unable to travel, readers sought answers within the pages of Camus’s 1947 tale about an Algerian city gripped by an epidemic. Many found in it a story about their own lives—a book to shed light on a global health crisis.

In thirteen linked chapters told in alternating voices, Alice Kaplan and Laura Marris hold the past and present of The Plague in conversation, discovering how the novel has reached people in their current moment.  Kaplan’s chapters explore the book’s tangled and vivid history, while Marris’s are drawn to the ecology of landscape and language. Through these pages, they find that their sense of Camus evolves under the force of a new reality, alongside the pressures of illness, recovery, concern, and care in their own lives. Along the way, Kaplan and Marris examine how the novel’s original allegory might resonate for a new generation of readers who have experienced a global pandemic.  They describe how they learned to contemplate the skies of a plague spring, to examine the body politic and the politics of immunity.

Both personal and eloquently written, States of Plague uncovers for us the mysterious way a novel can imagine the world during a crisis and draw back the veil on other possible futures.

"In this mélange of history, literary analysis, and memoir, the authors explore the intersection between a celebrated novel, current realities, scholarship, language, and the tricks that time and circumstance play on all of them. Seasoned literary historian Kaplan and poet and translator Marris, whose new translation of The Plague was published in 2021, team up to cultivate a deeper understanding of Camus’ classic novel. In alternating short essays, they braid together their distinct sensibilities to offer fresh insight and added significance to a canonical mid-20th-century book. . . . This is a notable addition to the literature about an indispensable French author."

“I thought I knew both The Plague and what it brings to the story of our own plague experience. After reading Kaplan and Marris’s States of Plague, I realize I could not have been more mistaken. This is a brilliant book that is always eloquent, often insightful, and, at times, simply heartbreaking.”

Robert Zaretsky, author of "Victories Never Last: Reading and Caregiving in a Time of Plague"

“Turning the intensity of a lockdown gaze on The Plague, Kaplan and Marris restore to Camus's constrained and unsettling allegory a world of associations, from occupied Paris in World War II to crumbling colonial cemeteries in Algiers. These erudite but highly personal reflections spiral outward from careful readings of the novel, relieving the mind like the ventilation of a long-closed room.”

Emily Ogden, author of "On Not Knowing: How to Love and Other Essays"

“In States of Plague, Kaplan and Marris combine their thought-provoking personal impressions with brilliant critical analyses based on the novel’s wealth of cultural, historical, and political contexts. Their complementary readings function both as a helpful introduction to The Plague and eye-opening observations about the novel’s contemporary relevance.”

I imagine a chronicle that would begin: “day 20 of Covid,” in which I claim my disease in medias res. I joke with Laura that after being sick, I’ll never write about Camus’s novel the same way. In fact, I’m worried that the effort of getting through this illness is making me indifferent to writing about it. But I end up typing in a daze, drawn to the words in spite of myself. The doctor said to watch out for day seven: that’s when some people dive deeper into violent illness. If my oxygen rate falls below 94, I should call “15” for an ambulance. He’s the neighborhood doctor I last saw for a special authorization to swim because of “skeletal problems,” who gave me a fifty-euro prix d’ami— a discount for his swimming prescription. Now he’s on the phone saying don’t call me, there’s nothing I’ll be able to do. If I call “15,” he says, an ambulance will take me to whatever hospital has beds left. Sure enough on day seven I get much worse. After a month, I’m still coughing— a disagreeable hack that doesn’t respond to any lozenge or syrup.

Camus’s novel, too, is a chronicle, but it isn’t a personal account. That’s the first thing I notice when I return to The Plague. Instead, it’s a chronicle of events—a report of what happens from day to day as people deal with the plague. It’s too polished to be a diary. This anonymous narrator doesn’t want to name himself— he says “we” instead of “I.” We do feel the narrator’s fatigue, but it’s the fatigue of an entire city.
It’s worth looking at the passage where Camus sets up his narrator’s secret:

"As for the narrator, whom you’ll meet in due course, he would never have tried to put himself forward for this kind of undertaking if chance had not given him the opportunity to collect a certain number of accounts and if the force of things hadn’t gotten him mixed up in all he presumes to relate. That’s what authorized him to take on the historian’s task. Of course, even if he’s an amateur, a historian always has sources. The narrator of this story therefore has his own: first of all what he witnessed, then what others witnessed, since, through his role, he ended up collecting the secrets of everyone involved in this chronicle, and last, the texts which finally fell into his hands."

It’s pretty unusual in a novel to have a narrator who tells you he is not going to give away his identity. So what could be the advantage? Why did Camus decide to use a narrator who refuses to say his name?

For one thing, withholding the identity of the narrator is a sure way to give the book momentum, a clever tactic to create mystery and to make sure the reader turns the pages, hoping he’ll be revealed. Modesty is key. The narrator explains that his identity will be known “in due course,” that he won’t give himself away. He’s been authorized to tell the story by accident, by the force of things, and he’s uncomfortable with the pressure of that responsibility. On American television, we hear about the heroes on the front lines, the people risking their lives. But in the novel, the refusal of heroism is key to Camus’s values.

In December 1946, Camus wrote a letter to his friend Louis Guilloux, who had just read The Plague in manuscript. Camus reports that he’s made all the revisions Guilloux suggested but that he’s changed nothing about the narrator. Yet he realizes this business about the narrator is confusing. He reports that he’s added a new sentence to the last chapter: “it’s time to admit the narrator is none other than Bernard Rieux.” Camus explains to Guilloux that Rieux’s suffering is shared with the suffering of other people—which is why he can remain objective— not focused on his particular story. “This is important to me,” Camus writes to his friend. “It’s the secret of the book, its power.” He adds that if the device succeeds, readers will be compelled to reread the novel as soon as they’ve finished.

The secret of the novel. We know that the narrator has to be someone who writes—but the novel is full of writers! It could be Grand, an obsessional scribbler (although he has writer’s block and keeps writing the same sentence over and over) It could be Rambert, a journalist (who would be used to writing chronicles), and of course it could be Tarrou, who is keeping his own private surreal journal of the plague, concentrating on insignificance.
The narrator reveals that he is “better placed” to speak about lovers, but there are several people in the novel who are separated from their loved ones. Grand’s wife left him fifteen years earlier. Rieux’s wife is at a sanatorium. Rambert’s wife is in Paris. A newspaper, the Courier of the Epidemic, is launched— to “inform our fellow citizens, with a care for scrupulous objectivity, of the rise and fall of the disease,” but in fact the Courier of the Epidemic attempts to lure people with advertisements for products that promise to prevent plague. The paper is the unreliable narrator of the epidemic— the opposite of the unassuming but stalwart chronicler of the novel.

As the story progresses, Camus plants real clues and red herrings, and as characters die, you are forced to eliminate candidates for the role of narrator.

Fact about this narrator: he is able to recount the plague from many points of view, many neighborhoods. He bears witness to personal tragedies, like a private detective in a noir novel who has access to the scenes of a crime, or like the demon Asmodeus, who lifts the roofs off houses. Or, as we’ll finally figure out, like a doctor who makes house calls, who can move from the business district to the hospital to the poorest neighborhoods of the city in an afternoon. Sometimes, through his movements, he almost gives himself away.

So there’s the literary advantage— making the pages turn around a mystery— and the ethical advantage: Camus’s commitment to an anonymous narrator is about making The Plague a story of more than one person’s experience. Camus’s first novel, The Stranger, is narrated in the first person by Meursault, although we know very little about what’s going on in his mind. Camus plays with the conventions of first-person narrative: a character who says “I” but who is impenetrable, unlike in a standard autobiography where the “I” makes us feel close to the narrator. Meursault’s flatness lends a strangeness to everything that transpires.

With The Plague, as Camus reflects on the experience of resistance, he plays with narrative convention once again, but this time his focus is the “we.” What matters to him ethically is to create a collective story, the story of a community under oppression. He’s anticipating a genre that Latin American writers will perfect, the testimonio, in the tradition of I, Rigoberta Menchu, the autobiography of an indigenous Guatemalan woman and a collective reckoning. “I’d like to stress that it’s not only my life,” she begins, “it’s also the testimony of my people.” At the end of The Plague, Rieux explains: “Being called to testify, upon the occasion of a sort of crime, he has kept a certain reserve, as is appropriate for an honest witness.”

So the narrator’s desire to remain anonymous is central to Camus’s ethics... he wants his narrator to remain selfless for as long as possible; a kind of eye, with more than his own interests or particular story at heart. But in fact, everyone seems to want to write about the plague in a different way—Tarrou with his eccentric diary entries, Rieux through his letters to his wife, Grand by not writing about the plague at all but imagining a beautiful horse and rider in the Bois de Boulogne. As these possible narrators parade before our eyes, Camus gives us time to think about who best tells the story of the disaster, who is authorized.

Here in France, the panic everywhere reminds me of how important the basic questions of Camus’s novel remain. Who is going to speak for the nation during a pandemic? Is there a universal narrator of a national situation? Should there be?