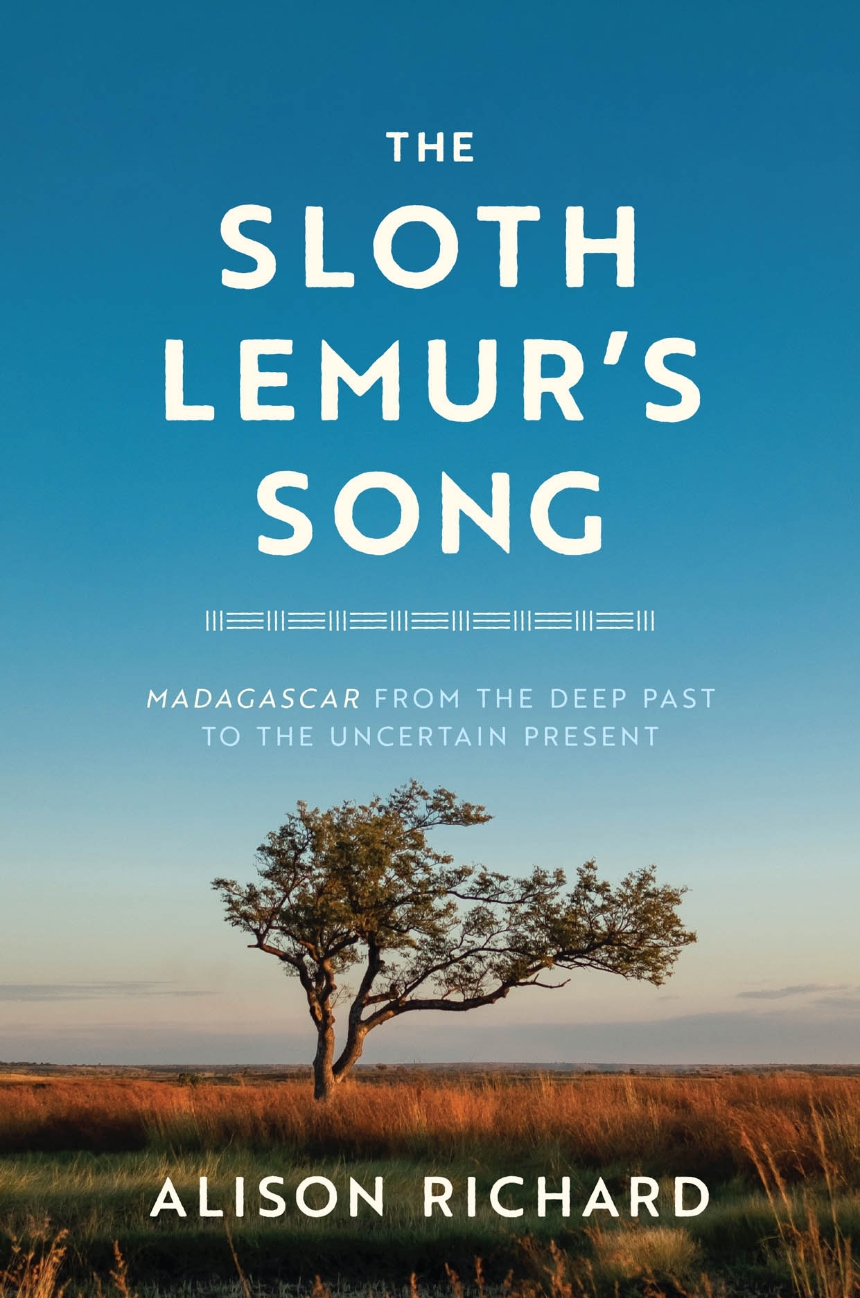 Madagascar from the Deep Past to the Uncertain Present

Madagascar from the Deep Past to the Uncertain Present

A moving account of Madagascar told by a researcher who has spent over fifty years investigating the mysteries of this remarkable island.

Madagascar is a place of change. A biodiversity hotspot and the fourth largest island on the planet, it has been home to a spectacular parade of animals, from giant flightless birds and giant tortoises on the ground to agile lemurs leaping through the treetops. Some species live on; many have vanished in the distant or recent past. Over vast stretches of time, Madagascar’s forests have expanded and contracted in response to shifting climates, and the hand of people is clear in changes during the last thousand years or so. Today, Madagascar is a microcosm of global trends. What happens there in the decades ahead can, perhaps, suggest ways to help turn the tide on the environmental crisis now sweeping the world.

The Sloth Lemur’s Song is a far-reaching account of Madagascar’s past and present, led by an expert guide who has immersed herself in research and conservation activities with village communities on the island for nearly fifty years. Alison Richard accompanies the reader on a journey through space and time—from Madagascar’s ancient origins as a landlocked region of Gondwana and its emergence as an island to the modern-day developments that make the survival of its array of plants and animals increasingly uncertain. Weaving together scientific evidence with Richard’s own experiences and exploring the power of stories to shape our understanding of events, this book captures the magic as well as the tensions that swirl around this island nation.

“Full of wonder and forensic intelligence, The Sloth Lemur’s Song is a love song to the astonishing evolution of Madagascar. It is a fascinating journey from the island’s origins to the complex tensions of the present day, with Alison Richard the most considerate and engaging of guides.”

Isabella Tree, author of 'Wilding: Returning Nature to Our Farm'

“This book is an encyclopedia of wonders, but it’s also a riveting story of evolution through time in a land utterly unique. Madagascar is arguably the most amazing place on Earth. Richard knows it as few outsiders ever will, and its praises have never been better sung.”

“With deep reflections about a culture immersed in bountiful nature, Richard guides the reader through Madagascar’s transformations over millions of years. Through her research and experience on the island, Richard reminds us what was lost, what remains, and what is under threat—unless we act.”

“This remarkable new book is a captivating and absorbing account. Richard shows the importance of partnerships between all stakeholders, from the local to the international level, for sustainable biodiversity conservation.”

“Richard shares her long experience, deep knowledge, and sincere and uncompromising passion for Madagascar, its people, and the history of its biodiversity. The Sloth Lemur’s Song is essential reading for anyone who is passionate about Madagascar's people and nature, curious about its past and interested in its future.”

“Richard's book can best be summarized as a love story; an ode to Madagascar. Throughout, the author interweaves first-person accounts of her extensive experience as a field biologist, detailed and accurate accounts of the natural history of the island, up-to-the-minute summaries of the latest scientific studies spanning everything from botany to geology to climatology, with the binding ‘through line’ of the Malagasy people and their relationship to the landscape.”

It was the autumn of 1968. I was an undergraduate and aspiring anthropologist at Cambridge University, and I was at a lecture about the lemurs of Madagascar. They were interesting animals, to be sure, but the slides of the southern forests were what transfixed me. Silvery, spine-studded trees snaked toward the sky, and graceful, slender-trunked trees lofted flowers at the tips of silvery branches. I had never seen a silver forest before, and was instantly hooked. I have been ‘living Madagascar’ ever since.

This book is about what I have learned. It begins with a nondescript patch of ground in the middle of a huge supercontinent 250 million years ago. The patch drifts south with the supercontinent, eventually breaks loose, and becomes the island we call Madagascar. The land is home to a parade of animals during these epochs. Its most ancient occupants give way to lumbering dinosaurs and furry little mammals, and then they too disappear after an asteroid hits Earth 66 million years ago. The deep, wide sea now surrounding Madagascar makes it difficult to reach, but a handful of animals beat the odds and settle there. Their descendants survive changing climate conditions, retreats and advances of forest and open country, the uplifting of mountains and flooding of lowlands. Somehow, they not only persist but diversify into an array of wildlife unlike any found elsewhere in the world. People start arriving about 10,000 years ago, bringing new plants and animals with them. Within the last thousand years, Madagascar’s largest native animals disappear and its forests recede. Today, forest cover continues to decline and the survival of many remaining animal species is in doubt.

I have organised chapters about these events and their causes chronologically, starting deep in the past and ending in the present. The resulting account will doubtless continue to evolve with further research, but it is already far better supported by evidence than the prevailing wisdom about Madagascar. This comes to us from early twentieth-century French colonists, who wrote simply of a timeless, forested paradise invaded and destroyed by people. Although grounded in up-to-date scientific evidence, I came to realise that this book is also a story. Did the sloth lemur really sing? That, we’ll never know . . . My enchantment with Madagascar is lifelong and personal as well as professional, and field experiences and times spent with other researchers are woven into its pages; the interpretation of evidence is my own and others may interpret it differently; and, most important, knowledge itself comes in many forms and mine is only one of them. I delve into these reflections in the first chapter, and in the last I explore what lessons they may hold for the future.

A black-and-white lemur sings high in the trees of a rainforest in the east while a tiny brown chameleon falls on its side and freezes on the ground far below, perfectly camouflaged as a dead leaf; a bird in glorious plumage glides between the tips of branches reaching for the bluest of skies above a spiny forest in the south; a baobab tree stands sentinel in a western deciduous forest, its massive trunk a personal water reservoir. This is Madagascar, crucible for the evolution of a grand diversity of life, for plants and animals found nowhere else on Earth.

When I began working there fifty years ago, few people outside the country even knew where it was. Responding to an anxious phone call about me made by my mother in 1970, a Foreign Office official in London inquired whether Madagascar was located in Europe. Things are very different today. The island is now recognised as one of the hottest of biodiversity hotspots in the world, along with regions like Amazonia and the rainforests of Central Africa. Through films, television clear.

The delight of almost everyone I encounter who has actually been to Madagascar is palpable. Their pleasure and excitement always puzzle me a little. They are mostly a self-selected group of people with an interest in natural history and the island harbours many unique plants and animals, to be sure. But it is far from being a fully-fledged tourist destination. Accommodations are often quite basic, and travel is slow, exhausting and fraught. Scattered through this book are sights and reveries during hours scrunched up in an assortment of four-wheel drive vehicles and, indeed, it sometimes feels as if I have spent more time getting between places than in them. Madagascar lacks great herds of zebra and wildebeest, prowling lions and leopards, or giraffes and elephants to marvel at. Its animals come mostly in small packages, and the sense of sheer good fortune and privilege at catching a glimpse of them doubtless contributes to their magic. But the enchantment goes far beyond that. A closer look at the lemur, chameleon, bird and baobab with which I began helps explain.

The singing black-and-white lemur (Indri indri) is called babakoto, literally ‘father of Koto’ in the Malagasy language. Some animals are actually black all over, although those in my mind as I write look like ‘a primate version of a giant panda’1. They are the largest living lemurs, with exceptionally long hind-limbs that power leaps between tree trunks up to 10 metres
apart. A babakoto has no tail, just a stubby stump. Lemur tails come in many forms – whip-like, foxy, striped – and it is hard not to feel sorry for babakoto, the only species without one. There is no good explanation for the absence.

Babakoto live in family groups – a female, male and their young – in northerly areas of the eastern rainforest. The female lords it over the male, as in many other lemur species. A couple will often stay together for many years while successive offspring grow up and eventually move away in search of mates of their own. Babakoto spend much of the day munching leaves and fruit, moving from one food tree to another, or resting. And they sing. A communal roar announces the song, most often in the morning. When the real song begins, the adult couple are the lead singers. The first bars are long notes. After them come wailing stanzas, beginning high and tumbling through several notes to lower wails. The couple sing in duet, although everyone except the youngest animals joins in, and a song may last for several minutes. The sound carries for kilometres across the treetops, and neighbouring groups break into songs of their own in response. Echoes fill the forest with a ghostly lament.

Why do babakoto sing? The song is almost certainly a territorial proclamation: ‘we are here, stay away’. But it seems to be more than that. The adult female’s repertoire includes more notes than the male’s, and she moves from one note to the next more quickly. To listeners in other groups, the song in its entirety may communicate who is present – how many individuals, how many males and females. Perhaps it is a way for neighbours to become better acquainted, because direct encounters are rare. Whatever the song’s function for babakoto, it is surely spellbinding for people who hear it.

Far down below on the forest floor, the brown leaf chameleon (Brookesia superciliaris) draws no attention whatsoever to its presence. Ramilaheloka, as they are called in some places, are found in many forests in the east, although actually seeing one takes a modicum of luck and a keen eye for small reptiles or, if you are me, being in the company of a good spotter. They have less trouble seeing us, one suspects: like all chameleons, ramilaheloka have the uncanny ability to swivel their eyes back-wards and forwards in opposite directions at the same time. Ramilaheloka are tiny. With bodies no more than 5 centimetres long, they would fit on your thumb. A newly discovered relative, B. nana, is even smaller – it would fit on your thumb print! With a vertically flattened body, a ramilaheloka looks as if someone had stepped on it sideways. Lying curled up on one side with legs tucked in, it bears a remarkable resemblance to a dead, brown leaf. That is just as well. The forest floor where it spends much of the day catching insects with a long, sticky tongue is a dangerous place for a very small chameleon. A horn sticking up above each eye and spines thrust out from its body may intimidate potential predators close to its own size, but they are no impediment for a hungry bird or snake. 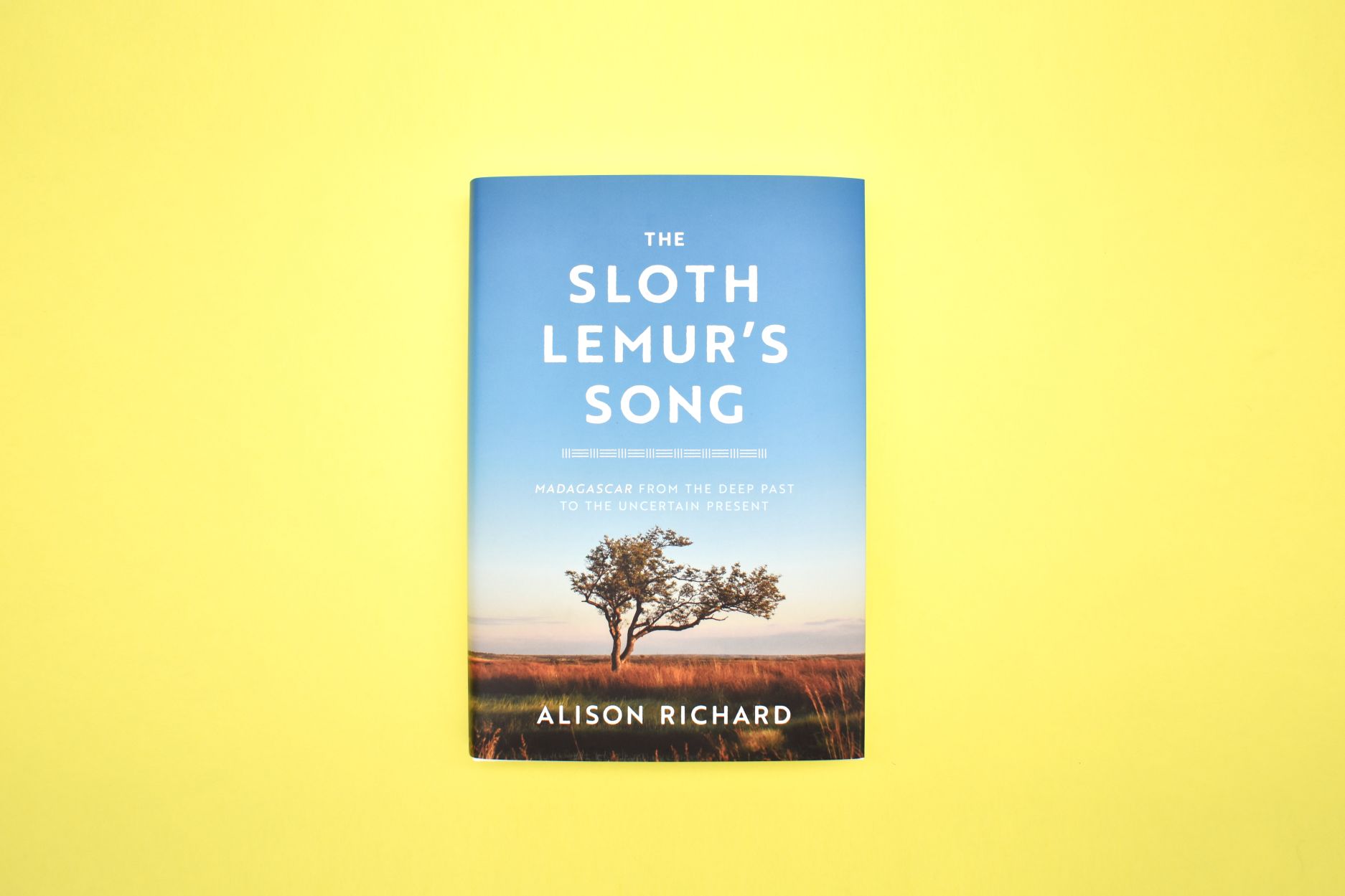 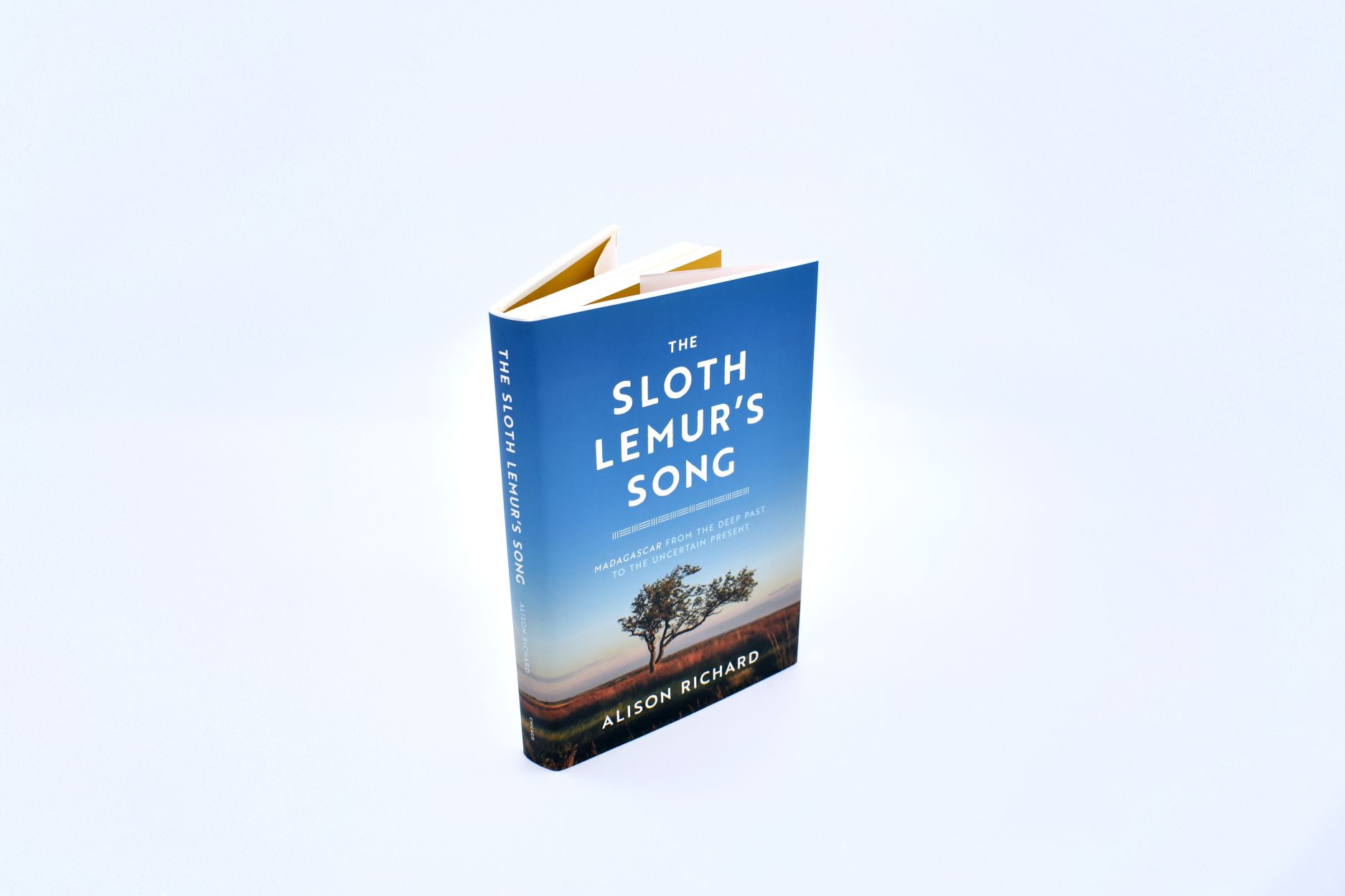 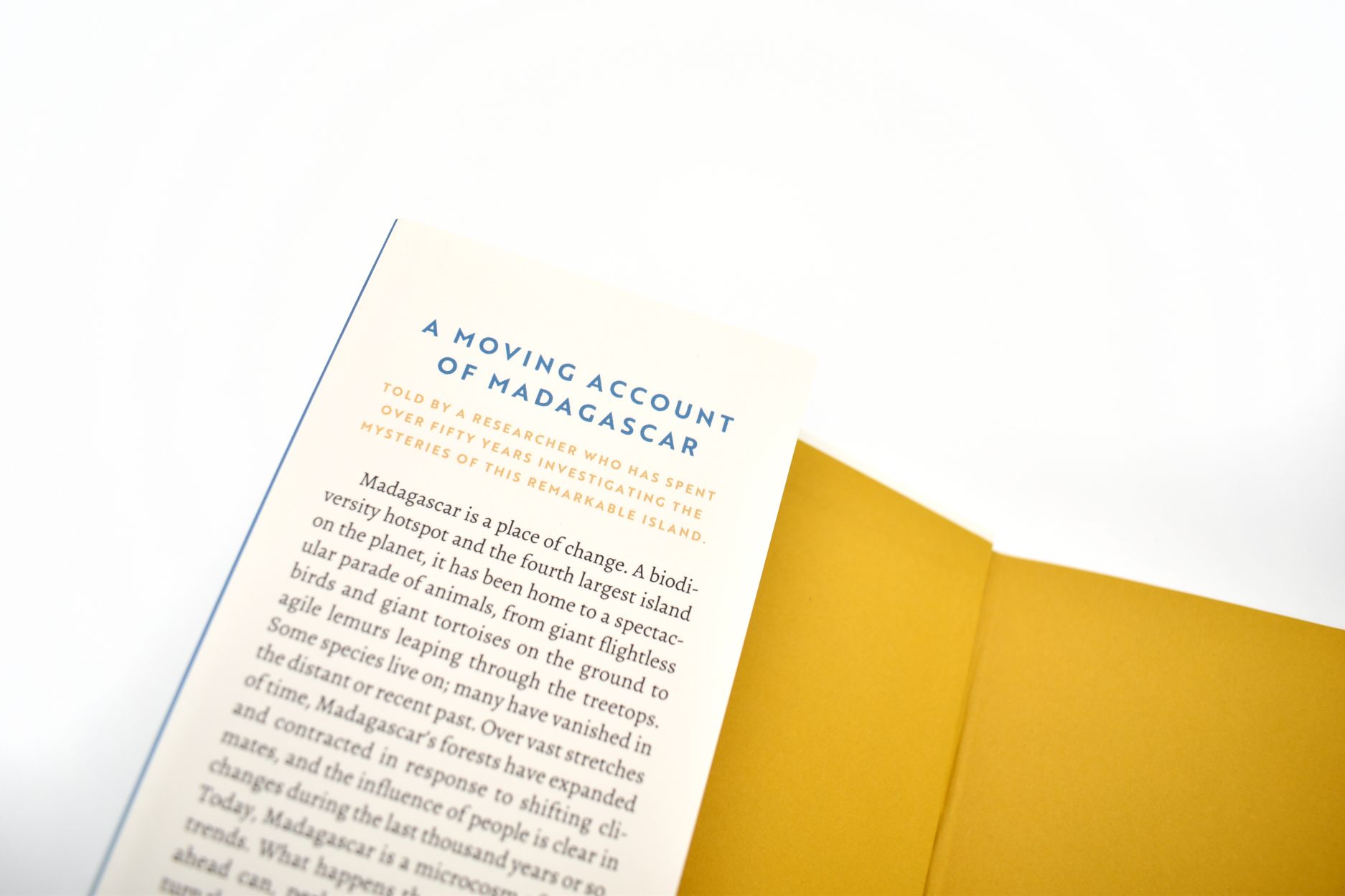 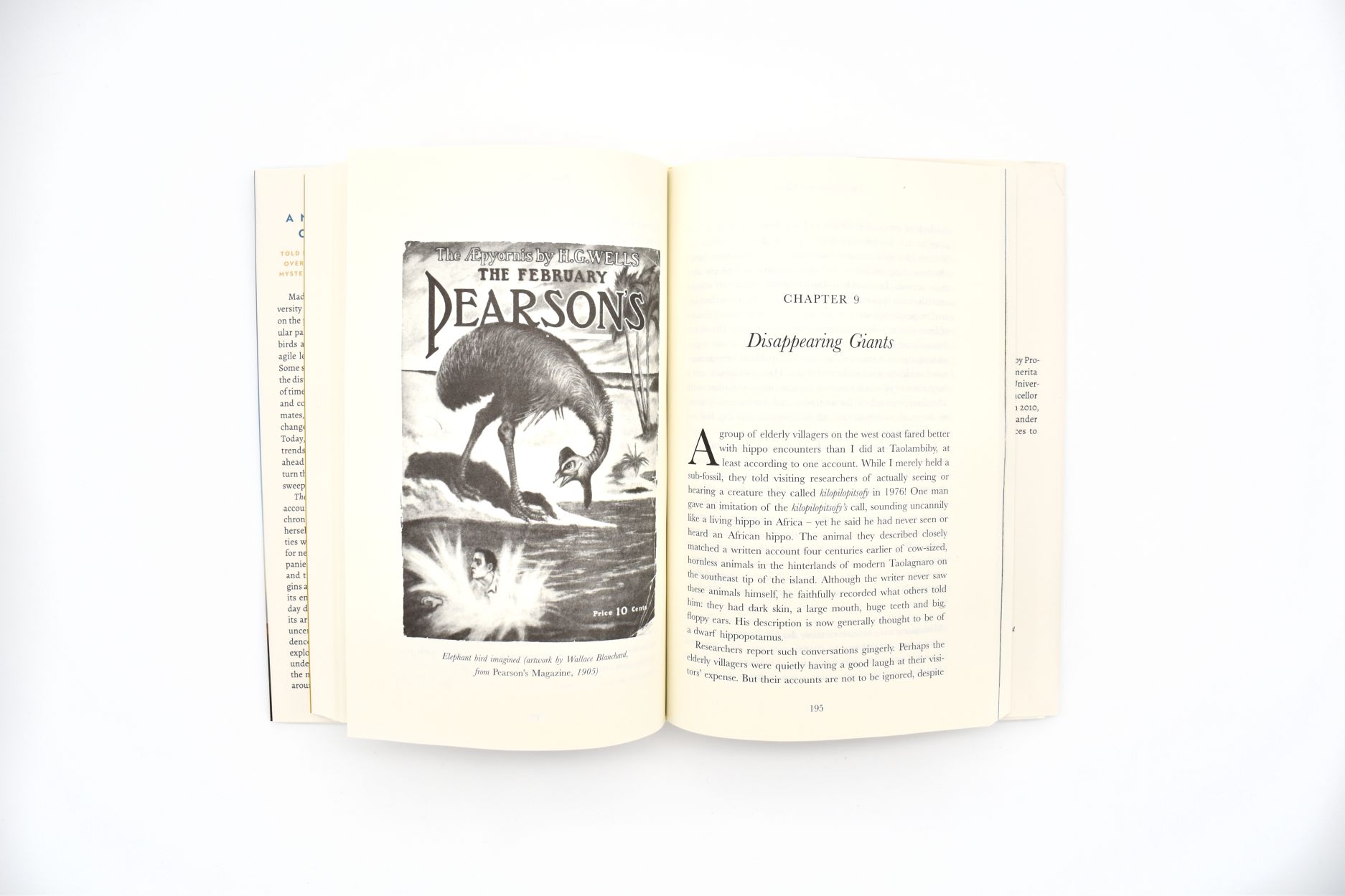 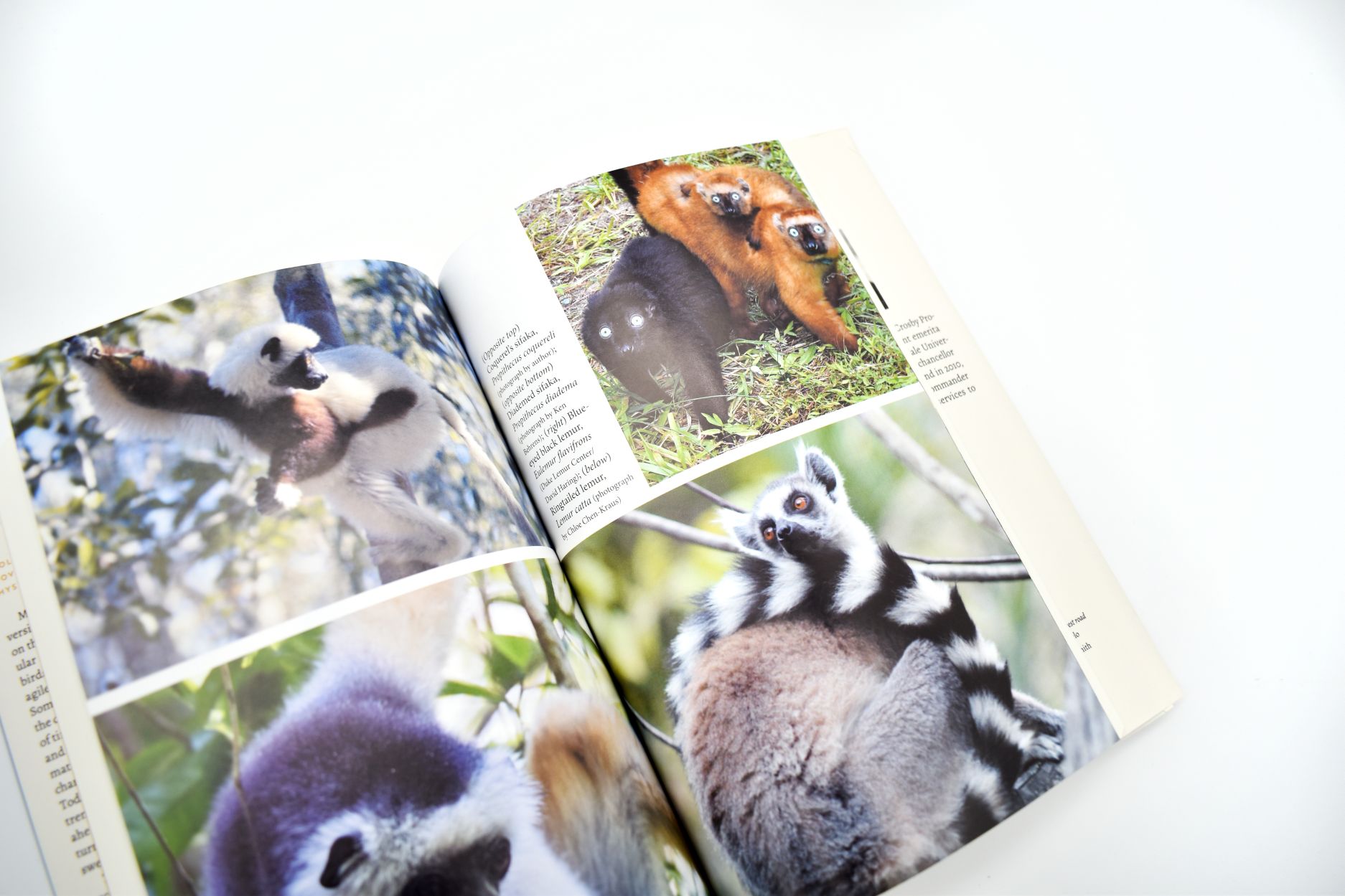