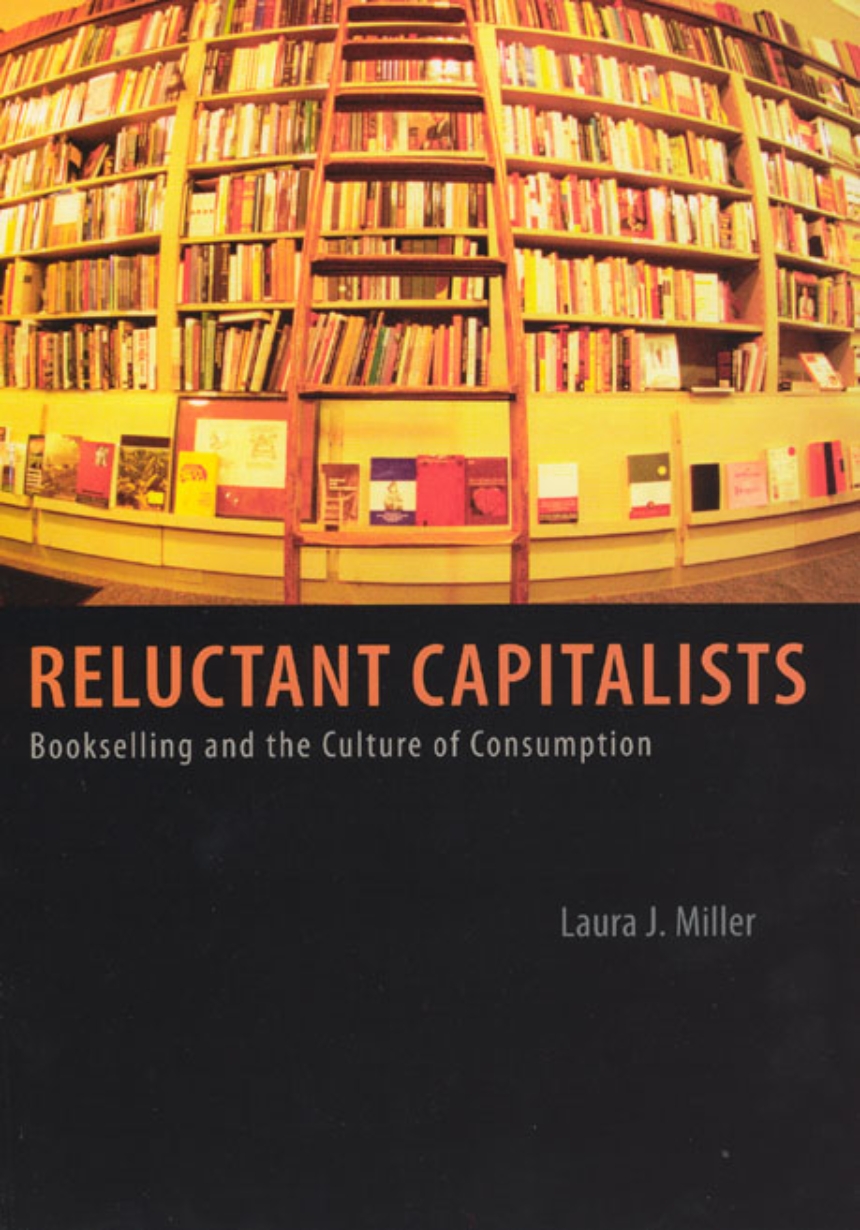 Bookselling and the Culture of Consumption

Bookselling and the Culture of Consumption

Over the past half-century, bookselling, like many retail industries, has evolved from an arena dominated by independent bookstores to one in which chain stores have significant market share. And as in other areas of retail, this transformation has often been a less-than-smooth process. This has been especially pronounced in bookselling, argues Laura J. Miller, because more than most other consumer goods, books are the focus of passionate debate. What drives that debate? And why do so many people believe that bookselling should be immune to questions of profit?

In Reluctant Capitalists, Miller looks at a century of book retailing, demonstrating that the independent/chain dynamic is not entirely new. It began one hundred years ago when department stores began selling books, continued through the 1960s with the emergence of national chain stores, and exploded with the formation of “superstores” in the 1990s. The advent of the Internet has further spurred tremendous changes in how booksellers approach their business. All of these changes have met resistance from book professionals and readers who believe that the book business should somehow be “above” market forces and instead embrace more noble priorities.

Miller uses interviews with bookstore customers and members of the book industry to explain why books evoke such distinct and heated reactions. She reveals why customers have such fierce loyalty to certain bookstores and why they identify so strongly with different types of books. In the process, she also teases out the meanings of retailing and consumption in American culture at large, underscoring her point that any type of consumer behavior is inevitably political, with consequences for communities as well as commercial institutions.

“From beginning to end, this book is a pleasure to read. Reluctant Capitalists is the first good history of American bookselling to appear in a very long time. Here, Laura Miller provides a fascinating analysis of conflicts within the book industry between the understanding of bookselling as a capitalist venture, and an almost diametrically opposed view of the same venture as something higher and worthier by virtue of books’ content and place within our culture.”--Elizabeth Long, author of Book Clubs: Women and the Uses of Reading in Everyday Life

“Laura Miller’s Reluctant Capitalists is a compelling account of the complex world of bookselling, focusing on the persistent dynamic between the book as a commodity and as a form of expression antithetical to market principles. Miller discovers that today’s conflicts between independents, chains and Big Box stores have historical precedents, and how despite repeated episodes of consolidation and price-cutting, readers and sellers remain passionate about the book’s extra-commercial status. In addition to producing a top-rate study of  bookselling, Miller has provided a fascinating framework for thinking about consumer culture more generally, by highlighting the ever-present tensions between commodification and singularity, sentiment and consumer rationality, emotion and economics.”--Juliet B. Schor, author of Born to Buy: The Commercialized Child and the New Consumer Culture

“This detailed account of the bookselling industry makes clear how difficult it is to maintain a moral boundary between local commerce and the rampant commercialism of retail websites and chains. Laura Miller shows that with books, as with every other commodity, the culture of consumption is shaped more by marketing strategies than by Americans’ desire to read.”--Sharon Zukin, author of Point of Purchase: How Shopping Changed American Culture

"Books are different. Commodities, to be sure. Bought and sold, no doubt. Yet in the world of commerce, books retain a certain mystique.

That regard has held true, traditionally, for booksellers as well, notes Laura J. Miller, a Brandeis University sociologist. In Reluctant Capitalists: Bookselling and the Culture of Consumption, she uses the bookstore wars between independents and big chains to explore the ambivalence toward business values in the world of books and wider concerns about consumption and highly ’rationalized’ systems of retailing.

Traditional booksellers felt stressed long before the first of the ’superstores.’ From the end of the 19th century to the 1960s, Ms. Miller writes, department stores took a heavy chunk of bookstore sales. Five-and-dimes and similar outlets also joined in, putting pressure on bookshops and making one commentator in 1954 fume that booksellers ’must now compete with everything from delicatessens to whore houses.’

A major jolt would come with the expansion of chain stores in the 1970s and 80s. Early on, writes Ms. Miller, chain bookstores tended to be small sites in mall locations with a focus on popular titles. Their discounts, previously rare in bookshops, threatened independents, but they had little in the way of selection. With superstores, things changed. The first superstores, opened by Crown Books in 1990, seem modest by later standards: 6,000 to 8,000 square feet, with 30,000 to 40,000 titles. By 2002 Borders stores carried 62,000 to 209,000 titles. Tracing the chains’ growth, Ms. Miller shows how they centralized and standardized selection, ordering, and other procedures while attracting a new public previously intimidated by bookstores.

Among her topics are the standardized design of superstores, with their mix of gentility and flash and their tactics of display. Just as in supermarkets, prime positions are for sale. Publishers with big marketing budgets, she says, can purchase good real estate for their titles, such as on the end of a row of shelves facing the aisle. While some books are promoted, others, especially those more esoteric or from smaller presses, may end up as ’wallpaper,’ there to create ambience but not pushed to sell.

Ms. Miller describes how independent booksellers, still feeling a mission along with the pinch, have fought back by transforming the American Booksellers Association into a champion for independents, pursuing lawsuits against trade practices they claim favor the big chains, and seeking support from an often fickle reading public."

"Though independent booksellers may believe they already understand all that there is to know about maintaining the delicate balance between economic success and cultural integrity, those who dip into Miller’s impressive examination will find their curiosity well rewarded. Miller’s historical analysis reveals, for example, how independent booksellers’ opposition to mass market competitors has shifted dramatically. Nearly a century ago, when department stores and five-and-dimes began selling books, the owners of established bookstores insisted that large commercial enterprises couldn’t guide customers to suitably uplifting reading material. As the cultural elitism behind this argument became unpalatable, the indies changed their tune, claiming that superstores were laying down homogenized inventories that stifled intellectual diversity. Miller also discusses the internal pressures that led the American Booksellers Association to adopt a more activist stance toward the chains in recent years. This . . . [is a] carefully articulated investigation."

"Chain superstores, notes Laura J. Miller’s fascinating new study Reluctant Capitalists: Bookselling and the Culture of Consumption, are the latest manifestation of a centuries-old struggle between bookselling Davids and Goliaths—a battle over where Americans actually shop versus stores with, Miller tartly notes, ’a style of retailing that Americans at least profess to miss.’"

“[Miller] wishes to make the bookstore into a political arena. By patronizing the indies, consumers can protest excess commercialization and the proliferation of chains. It is one small way of striking back.”

“Laura Miller sees what has happened since the 1960s as a long ’book war,’ with implications that extend far beyond the book trade. Books are a particularly illustrative commodity. . . . They cut through to the central issues of modern capitalism. How ’reluctant’ should retailers be in their surrender to the profit motive? What kind of retailing should consumers, by their purchasing practices, encourage?”

"A diligent and fascinating account of important new developments in the distribution and retailing of trade books in the United States. Anyone with an interest in the study of books, business and book historians both, will find much of interest in here."

"What emerges from Miller’s nuanced and exceptionally well-documentd survey of the book wars is an exemplary piece of scholarship and a model for how to undertake a sociology of the contemporary book world. . . . A fascinating and complex meditation on the broader politics of cultural consumption and the collective ethical implications of individual acts of consumer choice."