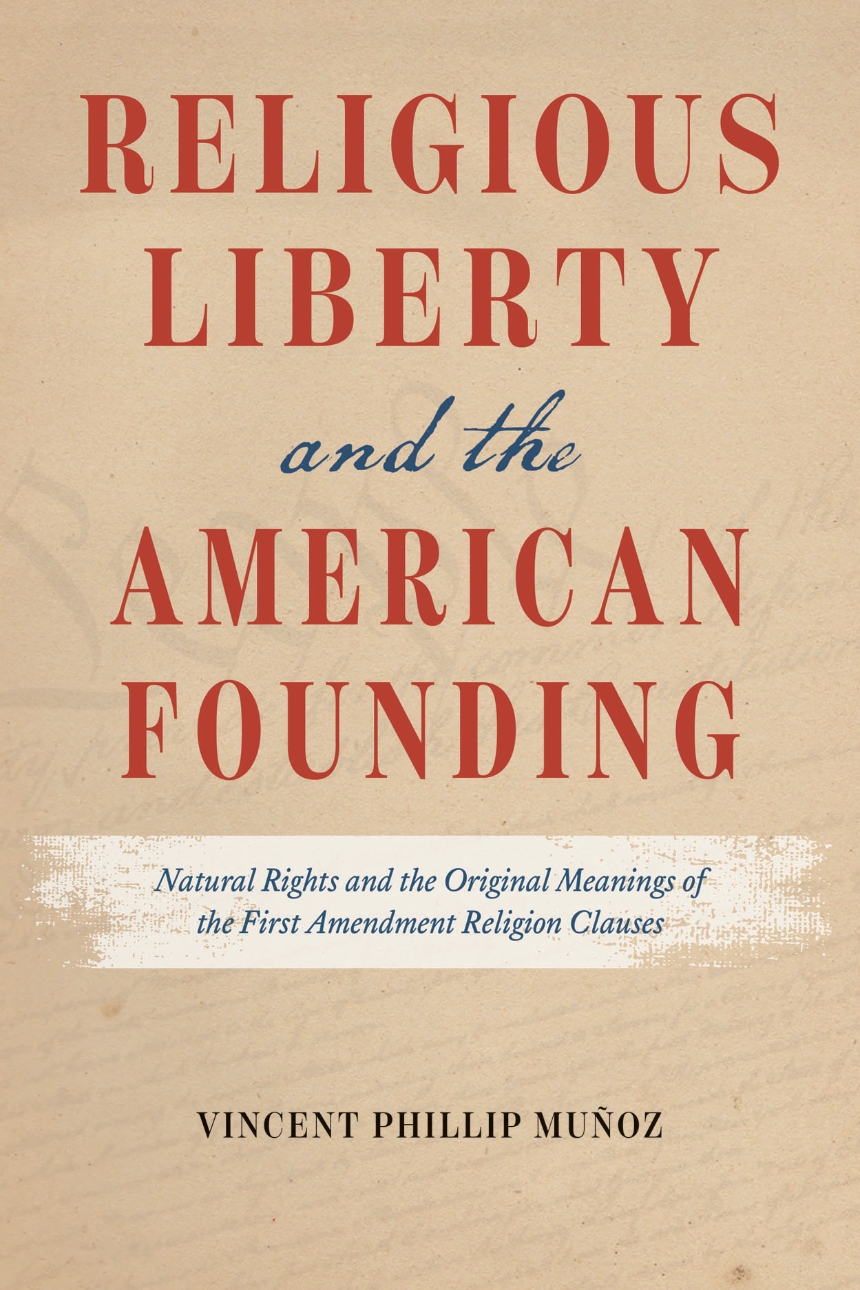 Religious Liberty and the American Founding

Religious Liberty and the American Founding

An insightful rethinking of the meaning of the First Amendment’s protection of religious freedom.

The Founders understood religious liberty to be an inalienable natural right. Vincent Phillip Muñoz explains what this means for church-state constitutional law, uncovering what we can and cannot determine about the original meanings of the First Amendment’s Religion Clauses and constructing a natural rights jurisprudence of religious liberty.

Drawing on early state constitutions, declarations of religious freedom, Founding-era debates, and the First Amendment’s drafting record, Muñoz demonstrates that adherence to the Founders’ political philosophy would lead neither to consistently conservative nor consistently liberal results. Rather, adopting the Founders’ understanding would lead to a minimalist church-state jurisprudence that, in most cases, would return authority from the judiciary to the American people. Thorough and convincing, Religious Liberty and the American Founding is key reading for those seeking to understand the Founders’ political philosophy of religious freedom and the First Amendment Religion Clauses.

"This book is the culmination of a decade of Muñoz’s scholarship on the religion clauses of the First Amendment. Those who imagine there is nothing new and valuable to say on this much-analyzed topic should think again. Muñoz has written the best account in one place of the way in which the political theory of the founders regarding religious liberty connects with the delphic legal text of those clauses."

"Vincent Phillip Muñoz’s superb new book is an indispensable guide to the issue that will soon replace abortion as the most important point of contention in our constitutional law. . . . The relationship between church and state will become the defining concern of a new era in the courts. . . . The framers wrote the religion clauses of our Constitution to set the parameters, as best they could, for a healthy and noble balance between freedom and order. Recovering the original meanings of those clauses is essential if we are to restore that balance, and Vincent Phillip Muñoz’s book gives invaluable aid in that necessary task."

"Vincent Phillip Muñoz’s lucid Religious Liberty and the American Founding provides one of the best treatments we have on the meaning of the religion clauses, despite the sometimes unclear records of their development. He delivers a compelling analysis of the state constitutional debates and their various comments about religious liberty....[His] review of what the Founders did—and did not—say about religious liberty, church-state relations, and natural rights is one of the best analyses I’ve ever seen on this sometimes perplexing historical topic."

"Religious Liberty and the American Founding provides a superb analysis of the natural-rights thinking that undergirded the founders’ understanding of the relation between religion and government. Muñoz examines the moral premises, political ideas, and public debates that informed the Constitution’s best-known limitations on government’s power to regulate religion. His natural-rights constitutionalism yields results that at different junctures will discomfit the right and the left. But his analysis makes better sense of the Constitution’s promise of religious liberty than the major alternatives."

"Phillip Muñoz, whose religion clauses scholarship is incredibly learned and thoughtful, now provides significant evidence of a natural rights basis for religious liberty in the American founding with a complete study in his new book, Religious Liberty and the American Founding. Muñoz contends, with deep support, that this natural rights foundation is the most historically accurate formulation of religious liberty."

"Muñoz’s account exhibits impressive scholarship; it provides a lucid explanation of the Founders’ natural rights thinking; and the examination of constitutional texts is methodical and informative. The analysis of the legislative history of the Establishment Clause is as meticulous as any I have seen."

“Muñoz’s exploration of the natural law foundations of religious liberty is highly illuminating. It is a model of how natural law analysis can be used to understand constitutional rights.”

“Muñoz offers a careful reconstruction of the original meaning of the religion clauses, scrupulously mapping the motives and concerns that animated the framers.  He vividly recreates their world and draws surprising contemporary implications from the constitutional text they wrote—implications that pose a serious challenge to the self-styled originalists on today’s Supreme Court.”

"This book is the culmination of a decade of Muñoz’s scholarship on the religion clauses of the First Amendment. Those who imagine there is nothing new and valuable to say on this much-analyzed topic should think again. Muñoz has written the best account in one place of the way in which the political theory of the founders regarding religious liberty connects with the delphic legal text of those clauses, which together state that 'Congress shall make no law respecting an establishment of religion, or prohibiting the free exercise thereof.'"