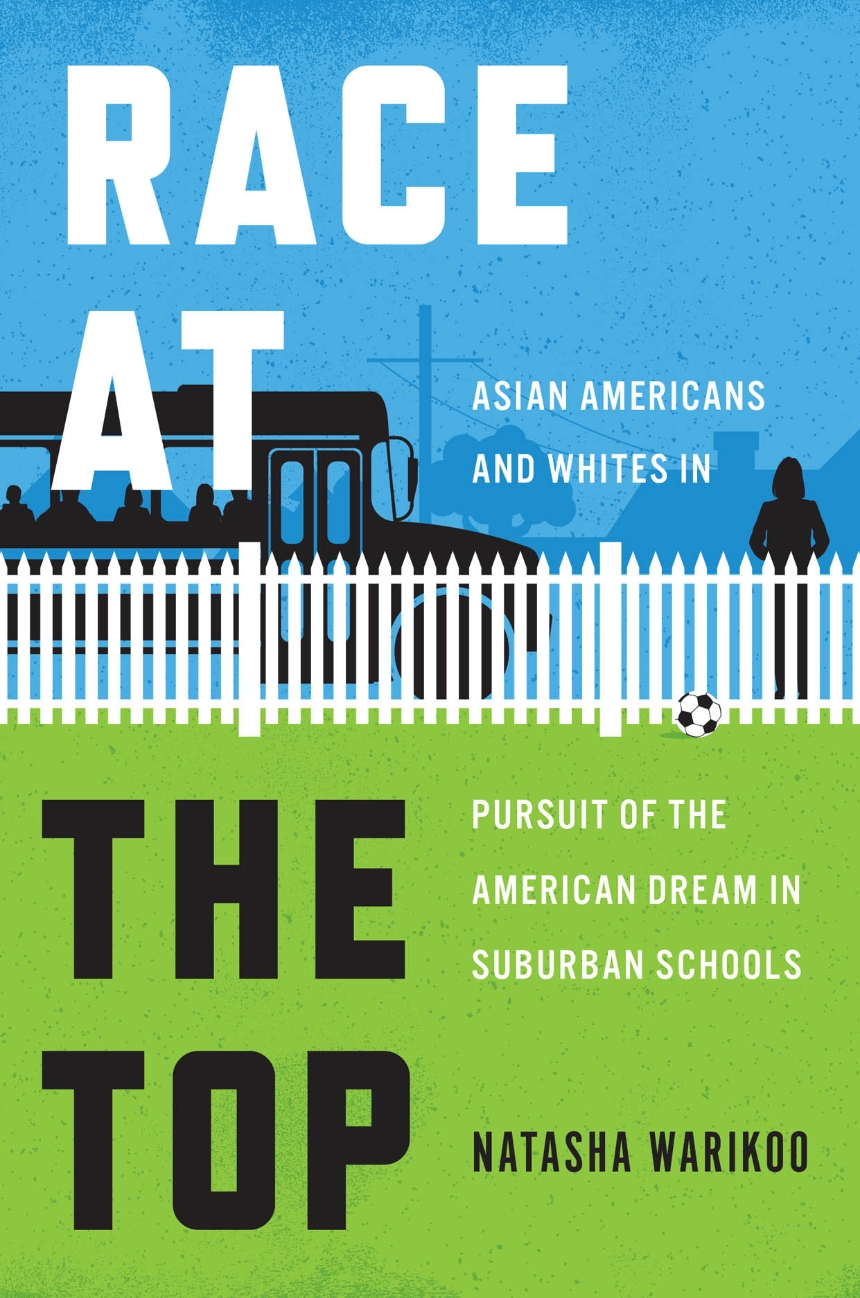 Race at the Top

Race at the Top

An illuminating, in-depth look at competition in suburban high schools with growing numbers of Asian Americans, where white parents are determined to ensure that their children remain at the head of the class.

The American suburb conjures an image of picturesque privilege: manicured lawns, quiet streets, and—most important to parents—high-quality schools. These elite enclaves are also historically white, allowing many white Americans to safeguard their privileges by using public schools to help their children enter top colleges. That’s changing, however, as Asian American professionals increasingly move into wealthy suburban areas to give their kids that same leg up for their college applications and future careers.

As Natasha Warikoo shows in Race at the Top, white and Asian parents alike will do anything to help their children get to the top of the achievement pile. She takes us into the affluent suburban East Coast school she calls “Woodcrest High,” with a student body about one-half white and one-third Asian American. As increasing numbers of Woodcrest’s Asian American students earn star-pupil status, many whites feel displaced from the top of the academic hierarchy, and their frustrations grow. To maintain their children’s edge, some white parents complain to the school that schoolwork has become too rigorous. They also emphasize excellence in extracurriculars like sports and theater, which maintains their children’s advantage.

Warikoo reveals how, even when they are bested, white families in Woodcrest work to change the rules in their favor so they can remain the winners of the meritocracy game. Along the way, Warikoo explores urgent issues of racial and economic inequality that play out in affluent suburban American high schools. Caught in a race for power and privilege at the very top of society, what families in towns like Woodcrest fail to see is that everyone in their race is getting a medal—the children who actually lose are those living beyond their town’s boundaries.

“An absorbing work of ethnography. . . that looks at the complex power and social dynamics at work in a system where success seems both scarce and an absolute imperative. Strikes a nice balance between academic and popular audiences."

"As uncomfortable as the question might be, we must ask whether changing demographics in America’s most competitive high schools and colleges will affect our educational values. In a truly postracial society, the answer would be no. But as Tufts University sociologist Natasha Warikoo argues in her new book, Race at the Top, an ethnography of how Asian and white parents approach childrearing, high-school education, and each other in the tony suburban community of Woodcrest', Asian immigrant parents differ strikingly from their native-born neighbors."

"[Race at the Top] is particularly good at demonstrating the tensions that stem from striving for achievement, including the resentments and complaints of white families who feel that Asians are displacing them from top positions. This portrait of an educational race to the top is a deep investigation into how parents and communities compete in the zero-sum game of social mobility through education."

“This is an indispensable study for anyone — including scholars, policy makers, and educators — who yearns to better understand how race, culture, and educational choices play out in a rarefied suburban milieu.”

"[Warikoo] makes an important contribution to the critical study of class-specific processes of racialization in general and the ambivalent role of racism in upper-middle-class liberal milieus in particular."

“In communities across the country, white and Asian parents argue over whose style of parenting is naturally better. Rather than consider such either/or questions, Warikoo effectively demonstrates that each group is making strategic choices that best advance their own children. As she passionately writes, the real argument should be how to support the children being left behind.”

“This powerful book is a significant addition to our understanding of envisioned pathways to success among Asian American immigrant parents and youth in the US, as well as the continued and contested power of whiteness in the current historic moment. Warikoo underscores key ways in which Asian parents benefit from the historically ‘locked in’ system of race exclusion that makes privileged spaces like Woodcrest possible in the first place.”

“Warikoo’s powerful new book is a must-read for all social scientists of immigration, education, and inequality in the US, as well as for parents who want to do ‘the best for their kids’ while creating an inclusive society. This first-rate analysis will be on course syllabi for years to come.”

“A vivid portrait of a key class segment of American society; one that has the imprint of an immigrant influence, and that grapples with change as a result of that influence. Race at the Top is a game-changing study that deserves a wide audience.”

“In this eye-opening book, Warikoo deftly guides us through the difficult waters of race, class, and achievement pressure—and how they intersect—in an East Coast suburb. She brings to this exploration many talents, including the ability to vibrantly convey people's stories and a keen understanding of both parenting and research. This is a very insightful, engaging, and important book.”

Richard Weissbourd, author of "The Parents We Mean to Be"

Sabrina is forty-five and white, a mother of three.

Her house looks like picture-perfect suburban wealth—a broad, shimmering lawn, tall trees, big windows—close, but not too close, to the quant main street of her town. Street parking is not allowed.

Sabrina brewed coffee for us while I sat on a barstool at the island in her kitchen. She wore stylish boots, fitted pants, a dress shirt. It was quiet: her kids were at school, her husband at work. She told me that she and her family moved to the town when her oldest was about to start kindergarten so that the children could attend the town’s highly regarded schools. From the moment Sabrina started speaking, it was clear that her days were filled with supporting her kids and their schools. Achievement and happiness were a full- time job; the skills required were numerous.

When Sabrina’s son Michael was not placed in the math level she felt he deserved in eighth grade, she and her husband met with Michael’s teacher. “Can you help us understand why this is the recommendation?”2 She recounted their conversation with the teacher. “My son is devastated that this is his level.” The school relented, and moved him up. I found myself stiffening as she told me this story— I knew that this was the kind of behavior that perpetuates educational inequality, even if Sabrina didn’t realize it and was simply thinking of the best for her son, like all parents do.

Beyond academics, Sabrina supported Michael’s aspirations in sports, too, especially soccer and lacrosse. Sabrina’s cultivation of Mi-chael’s athletic skills when he was young seemed to be paying off. He had previously played with an elite town soccer team—more elite than the usual town and travel teams—but quit that team to join an even more elite private “club” lacrosse team “in anticipation of going to high school and trying to make the team.” Club teams in her area typically cost thousands of dollars every year, and provide, among other things, a paid professional coach and game locations well- beyond the usual maximum hour- long drive for travel teams. Weekend tournaments and costly hotel stays are common. Again, I found myself feeling uneasy, partly for the implications for inequality and partly, I have to admit, because the conversation was beginning to make me worry about my own parenting, which was feeling more lax by the minute. The phrase “intensive parenting” kept coming to mind as she shared her kids’ ac-complishments and problem-solved their difficulties.

Sabrina also was adamant about the importance of racial diversity. She particularly appreciated her town’s busing program that brought a small number of students—mostly Black and Latinx—from the urban school district near her children’s schools. In fact, Sabrina’s family volunteered to be the local contact for a child in the program for a number of years, frequently having that child over to their house. Beyond the busing program, the number of Asian immigrants was growing in her town—in fact, Michael was one of only three white students in his class. She gave me her take on those changes:

When I look at his kindergarten picture, it looks like the UN, which we love. Diversity is  important to us, something we embrace. And it was about 15 percent [students of color]        when we moved in. And now I think we have, at least within the school age population,    close to 40 percent. So that is a huge change in ten years. . . . I’m delighted we’re        preparing our kids for a flat world.

But as she gushed about diversity, a sense of dismay crept into our con-versation. She hesitated, uneasy, before describing the growing diversity as also having “some very meaningful implications on life in this town.” Sabrina was frustrated at how other families’ decisions some-times negatively affected her own children. She got most visibly upset when she described how her children sometimes lose out to kids whose parents do things differently.

Sabrina particularly resented Michael’s Asian American peers who improved their math skills by taking supplementary classes outside of school. In fact, she blamed Michael’s initial eighth- grade math placement on those classes. Michael told his mom that eighteen of the twenty- one students in his class had a supplementary math class out-side of school— he was one of the three who did not. Given the match-ing numbers, I guessed that the other two white kids in class were the other two who did not do supplementary math. Sabrina’s liberal identity may have prevented her from naming their ethnicities explicitly, but the association was implicit. I felt myself getting defensive at Sabrina’s disapproval.

Those other parents could have been my own Indian immigrant parents a genera-tion ago. If there had been supplementary math classes in my western Pennsylvania town, I am certain my parents would have signed me up. Instead, they assigned me pages of a math workbook every day during summer vacation before they went off to work— and I did them. While I hated those assignments—mostly, I think, because my red- headed best friend across the street never had any summer work, and so it added another reason for me to feel different in my predominantly white town— as an adult I have more empathy for my parents’ choices. Still, after talking with parents like Sabrina I was happy that I did not live in a town like hers. I even felt a newfound appreciation for the gentle pace of my own children’s schools— fewer demanding parents, less pressure. I wondered if I too would come to resent the parents Sabrina described if I lived in her town and felt my kids would need to sign up for a supplemental course if I wanted them to take honors math.

Sabrina lamented the impact of this intensive parenting on Michael’s self- esteem and self- confidence: “So my son is being compared to kids who are doing the supplemental math and he’s suffering in his estimation of himself because of it.” Sabrina labeled the impact of supple-mental math on kids who do not participate “comparative distress,” claiming that it had led her child to think he wasn’t good at math. These kids, she shook her head, “think they’re stupid.” She made her view clear: “I think it’s a problem. And I think it’s creating some of the stress and the tension and the anxiety.” The message— like so many things in her town—was implicit but clear. Asian parenting choices make white children like her own feel less competent and miss out on advantages to which they feel they are entitled. She loved racial diversity and the prospect of a “flat world,” but when these things threatened her son’s academic position, that love seemed to sour.