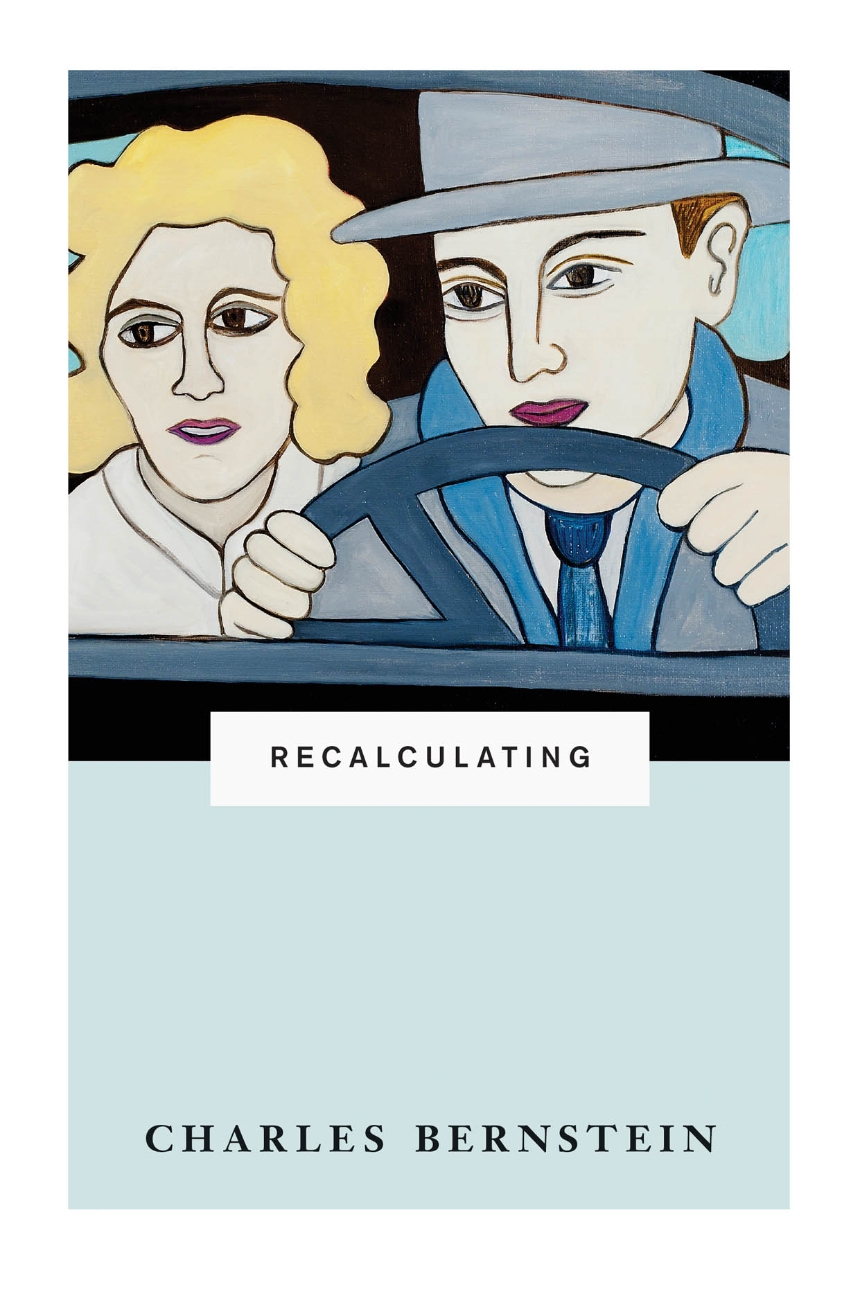 Long anticipated, Recalculating is Charles Bernstein’s first full-length collection of new poems in seven years. As a result of this lengthy time under construction, the scope, scale, and stylistic variation of the poems far surpasses Bernstein’s previous work. Together, the poems of Recalculating take readers on a journey through the history and poetics of the decades since the end of the Cold War as seen through the lens of social and personal turbulence and tragedy.
The collection’s title, the now–familiar GPS expression, suggests a change in direction due to a mistaken or unexpected turn. For Bernstein, formal invention is a necessary swerve in the midst of difficulty. As in all his work since the 1970s, he makes palpable the idea that radically new structures, appropriated forms, an aversion to received ideas and conventions, political engagement, and syntactic novelty will open the doors of perception to exuberance and resonance, from giddiness to pleasure to grief. But at the same time he cautions, with typical deflationary ardor, “The pen is tinier than the sword.” In these poems, Bernstein makes good on his claim that “the poetry is not in speaking to the dead but listening to the dead.” In doing so, Recalculating incorporates translations and adaptations of Baudelaire, Cole Porter, Mandelstam, and Paul Celan, as well as several tributes to writers crucial to Bernstein’s work and a set of epigrammatic verse essays that combine poetics with wry observation, caustic satire, and aesthetic slapstick.
Formally stunning and emotionally charged, Recalculating makes the familiar strange—and in a startling way, makes the strange familiar. Into these poems, brimming with sonic and rhythmic intensity, philosophical wit, and multiple personae, life events intrude, breaking down any easy distinction between artifice and the real. With works that range from elegy to comedy, conceptual to metrical, expressionist to ambient, uproarious to procedural, aphoristic to lyric, Bernstein has created a journey through the dark striated by bolts of imaginative invention and pure delight.

“The English word ‘calculate’ has a double life: in standard English it means to ‘reckon’ or ‘intend’ and in dialect it means ‘to guess.’ These contrary, wayward, definitions—the first so full of certainty, the second so full of ironic doubt—shimmer and clash on every page of Charles Bernstein’s obsessive, brilliant new book of poems, Recalculating. Through responses, translations, adaptations, and occasional pieces, through little hymns and tragic litanies, Bernstein measures and dreams a circle: a community of readers and writers who spin within a world built from the living history of words.”

“Recalculating gathers a substantial selection of (mostly) new poems—a few go as far back as the 80s and 90s—in a remarkably coherent and enlightening collection—though I’m certain Bernstein would abjure both of those adjectives. He has always rejected the idea of the poem as honed and polished object, and the poems in this book are as open as life itself. One thing that Recalculating makes clear is that, though Bernstein can deliver some ‘killer’ aphorisms, he is primarily a poet of abjection. He has always been drawn, as he puts it here, to the ‘painfully clumsy, clumpsy.’ Slapstick is bunkmates with failure and even heartbreak. This is especially evident in recent poems such as “Recalculating” and “Before You Go” which directly or indirectly reference the sudden death of the poet’s daughter. It is breathtaking—disturbing and admirable—that grief appears in these poems, as it does in life, alongside—well, alongside everything.”

“Charles Bernstein is writing in the simplest of forms—so simple they become radical. I love reading his work because he’s writing on the cusp of what poetry is.”

“The ethos and critique are of poetry, which becomes a rich dark with a phosphorescence of lyric as witness.”

“I was wrong, I apologize, I recant. Originality may be the only course when loss is the mother of invention. These are not my words but I mean them."

“For Charles Bernstein, historical works, interpretation, and adaptation all contribute to the cacophony of contemporary life. This collection contains a characteristically wide range of innovative verse, including formal stanzas with predictable end rhymes, columns of replicated phrases, essays in verse, axiomatic maxims, zen koans, and translations of Baudelaire, Apollinaire, and Catullus. Throughout, Bernstein usurps expectations and even anticipates, jokingly, how skeptical readers might receive his work: ‘I try to get them to see it as formal, structural historical, collaborative, and ideological. What a downer!’”

"All the defiance and revolution, all the polemics and pontifications, all the shouting and laughter, come from the same core source; Charles Bernstein’s profound love of poetry. All the wrong turns, all the deviations, all the explorations, all the escapes, they all return to one fundamental idea; poetry is beautiful and poetry is important. And so is Recalculating."

"The range of invention in Recalculating is impressive: translations and adaptations (Baudelaire, Cole Porter, Mandelstam, Celan, Wordsworth, Plath, and Nerval, just to name a few), aphoristic poem-essays (including the title poem), doggerel, list poems, joke-poems (“The Twelve Tribes of Doctor Lacan,” for example), elegies, hay(na)ku, and more. The collection has a richness which will not be exhausted by multiple readings. It demands to be read over and over again—not for reasons of exegesis, but for pure pleasure. "

“Recalculating is an immense book, hitting the extremes — of slapstick and tragedy, wisdom and buffoonery. The book’s accomplishment, ultimately, is its constant attempt to expand what it is in us that is affected by poetry."

“Charles Bernstein’s ars poetica is courageously resistant to the blandishments of what he calls ‘personification’ in its easy embrace of the unimaginable. This insistence makes all the more poignant and arresting, then, the abject misery of personal misfortune obliquely sheltered, honored, and given voice in Recalculating, a resounding collection by one of the true originals of the art.”

“Ignore those who “don’t read Charles Bernstein” because of tired and tedious attitudes about L=A=N=G=U=A=G=E poets. Bernstein’s Recalculating is one of the most fascinating books of the year. Recalculating shows a wider range of tones, modes, forms, and political engagement than the anti-L=A=N=G=U=A=G=E folks would have you believe. It uses slapstick, prose, fragment, aphorism, lyric invention, and artifice to do something fantastic.”

“For all his earnestness of purpose, there has often been a Groucho as well as a Karl Marx element to Bernstein’s poetics, a belief that humor is as likely to open the doors of perception as polemic.”

"A long tradition credits comedy as a force that distances us from the maladies of experience. . . Bernstein’s most recent volume of poems, Recalculating, brings us up against the 'black sun' of comedy, whose formal turbulence is shadowed on nearly all of its pages by the death (in 2008) of his daughter, Emma."

Autopsychographia
The Truth in Pudding
Poem Loading . . .
Talk to Me
From Stone
Sane as Tugged Vat, Your Love
Two Stones with One Bird
Sad Boy’s Sad Boy
Design
Blue Tile
The Honor of Virtue
Blown Wind
The Duck Hunters
Loneliness in Linden
Umbra
Dea%r Fr~ien%d,
Fold
Ku(na)hay
5 for MP
Brush Up Your Chaucer
The Importance of Being Bob
Every True Religion Is Bound to Fail
The Twelve Tribes of Dr. Lacan
Do Not Desensitize
Sea Drift
On Election Day
Last Words
Pompeii
I will not write imitative poetry
All Set
The Sixties, with Apologies
Prose
Not on My Watch
In Res Robin, Nibor Resalb Inscripsit Mentastrum (XXC)
Stupid Men, Smart Choices
Lenny Paschen Redux
Trouble Near Me
Later
Irreconcilable Disrepair
sorrow where there is no pain
A Theory’s Evolution
Todtnauberg
How Empty Is My Bread Pudding
[“There once was a Young Woman of Whitechapel”]
Transegmental Drift
Incantation by Laughter
Great Moments in Taches Blanches
You Say Insipid, I say Inscripsit
[“To empty earth falling unwilled”]
A Long Time ’til Yesterday
Joint Dark Energy Mission
To a Begging Redhead
The Moment Is You
This Poem Is in Finnish
Breathtails
The Jew
Manifest Aversions, Conceptual Conundrums, & Implausibly Deniable Links
And Aenigma Was His Name, O!
Armed Stasis
Unready, Unwilling, Unable
Recipe for Disaster
After Leminski
Catullus 85
Psychology of Composition (VII)
Venereal Muse
Poems for Rehab
Won’t You Give Up This Poem to Someone Who Needs It?
The Most Frequent Words in Girly Man
Death on a Pale Horse
Up High Down Low Too Slow (2)
Charon’s Boat
If You Say Something, See Something
[“Tomorrow, dawn . . .”]
Today Is the Last Day of Your Life ’til Now
Time Served
Synchronicity All Over Again
Le pont Mirabeau
Morality
The Introvert
Strike!
Sapphics
Recalculating
Misfortune
Be Drunken
Long Before the Rain, I Wept
Chimera
Before You Go
Notes and Acknowledgments