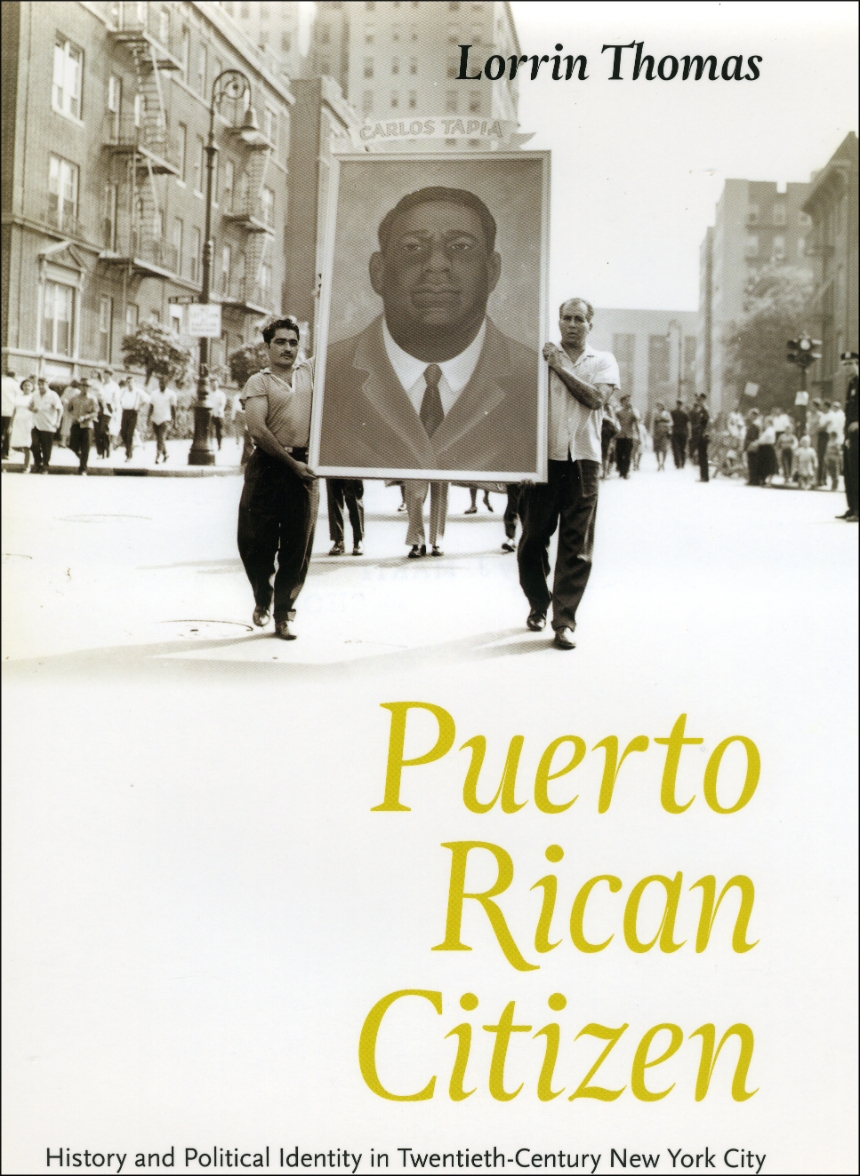 By the end of the 1920s, just ten years after the Jones Act first made them full-fledged Americans, more than 45,000 native Puerto Ricans had left their homes and entered the United States, citizenship papers in hand, forming one of New York City’s most complex and distinctive migrant communities. In Puerto Rican Citizen, Lorrin Thomas for the first time unravels the many tensions—historical, racial, political, and economic—that defined the experience of this group of American citizens before and after World War II.

Building its incisive narrative from a wide range of archival sources, interviews, and first-person accounts of Puerto Rican life in New York, this book illuminates the rich history of a group that is still largely invisible to many scholars. At the center of Puerto Rican Citizen are Puerto Ricans’ own formulations about political identity, the responses of activists and ordinary migrants to the failed promises of American citizenship, and their expectations of how the American state should address those failures. Complicating our understanding of the discontents of modern liberalism, of race relations beyond black and white, and of the diverse conceptions of rights and identity in American life, Thomas’s book transforms the way we understand this community’s integral role in shaping our sense of citizenship in twentieth-century America.

"Written with simple elegance and brilliantly engaged with the politics of dignity and recognition, Puerto Rican Citizen represents an important achievement—one that I am convinced will assume its rightful place among the best examples of scholarship on Puerto Rican history, Latino studies, and the broader history of citizenship. Engaging the history of the Puerto Rican diaspora, as well as the literature of race, imperialism, and national citizenship, Thomas lays the groundwork for a much-needed reconsideration of the significance of Puerto Ricans in the social history of the United States. Puerto Rican Citizen is a powerful work of original scholarship that should attract a broad audience among academic and general audiences alike."

“Lorrin Thomas’s book is an extremely well-researched, clearly written, and impressive account of the struggle of Puerto Rican migrants and their offspring to take advantage of their status as U.S citizens to gain political, economic and social rights in the complex racial and ethnic landscape of New York City in the twentieth century. Thomas utilizes a vast array of archival materials, oral histories, community newspapers, and social science reports to chronicle this struggle, while vividly describing the radial logic and liberal ideology that avoided the implications of the U.S. colonialism in the Caribbean to increasingly and consistently place Puerto Rico on the ‘foreign’ side of the immigrant spectrum despite the 1917 law granting them U.S. citizenship. This is an original and sensitive volume that will be important addition to the growing scholarship on Latino history, appealing to a wide audience of scholars and students alike. I believe this book will become the standard work in the field, likely to be used throughout the nation for years to come to understand the Puerto Rican experience in the most important city of migration.”

One New Citizens of New York

Community Organization and Political Culture in the Twenties

Two Confronting Race in the Metropole

Racial Ascription and Racial Discourse during the Depression

Three Pursuing the Promise of the New Deal

Relief and the Politics of Nationalism in the Thirties

Four How to Represent the Postwar Migration

Five How to Study the Postwar Migrant

Youth Activism in a New World

From Colonial Citizen to Nuyorican