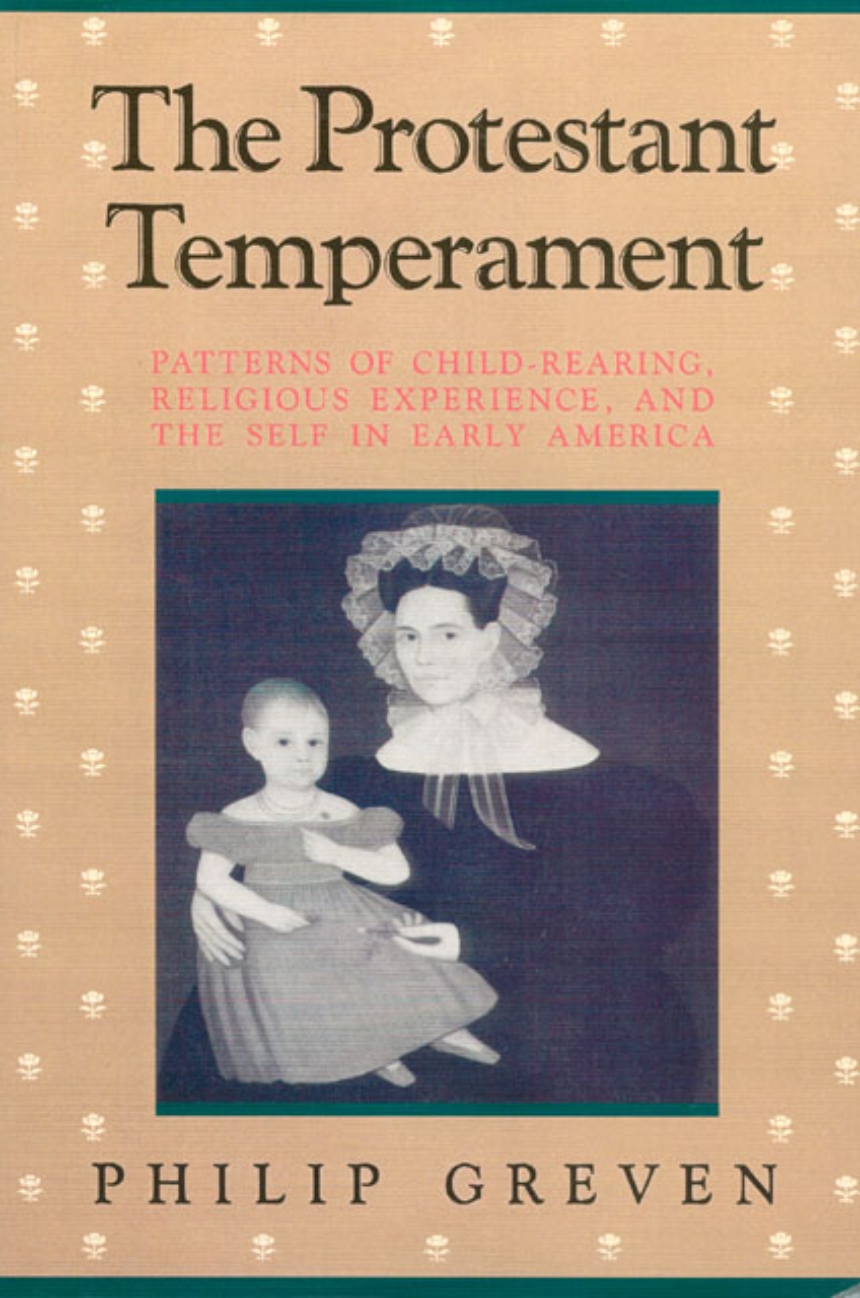 Patterns of Child-Rearing, Religious Experience, and the Self in Early America

Patterns of Child-Rearing, Religious Experience, and the Self in Early America

Bringing together an extraordinary richness of evidence—from letters, diaries, and other intimate family records of the seventeenth and eighteenth centuries—Philip Greven explores the strikingly distinctive ways in which Protestant children were reared in America. In tracing the hidden continuities of religious experience, of attitudes toward God, children, the self, sexuality, pleasure, virtue, and achievement, Greven identifies three distinct Protestant temperaments prevailing among Americans at the time: the Evangelical, the Moderate, and the General. The Protestant Temperament is a powerful reassessment of the role of child-rearing and religion in early American life.

Acknowledgments
Part One - Prologue
I. Patterns for the Past
A Historian’s Past: Patterns of Thought and Religious Belief in Early America
The Persistence of Piety
Temperament and the Self
Childhood, Temperament, and Religious Experience
Toward a New Paradigm
Part Two - The Evangelicals: The Self Suppressed
II. Authoritarian Families: Modes of Evangelical Child-Rearing
Pious Parents, Precious Mothers
The Household
Embryo-Angels or Infant Fiends?
Broken Wills: Discipline and Parental Control
Regular Methods of Living: External Discipline in Evangelical Households
Shaping the Evangelical Conscience: Shame, Guilt, and Inner Discipline
The Vanities, Pleasures, and Sins of Youth: The Emergence of Self and Self-Will
III. "A Habitation of Dragons": Themes of Evangelical Temperaments and Piety
The New Birth
"Our Loathsome Corruption and Pollution": Attitudes Toward the Body
"That Monster, Self"
Broken Wills and Tender Hearts
Authoritarian Temperaments: Evangelical Responses to Power
Soldiers for Christ: Anger, Aggression, and Enemies
Brides of Christ: Femininity, Masculinity, and Sexuality
The Quest for Purity
Part Three - The Moderates: The Self Controlled
IV. Authoritative Families: Moderate Modes of Child-Rearing
The Household Setting
Innocent Infants
Bending the Will: Moderate Discipline and Voluntary Obedience
"Planting the Seeds of Virtue" in Childhood and Youth
Love and Duty: The Obligations of Connection
V. Sober, Virtuous, and Pious People: Themes of Moderate Temperaments and Piety
A Sense of Connections: Organicism and the Chain of Being
"This Contrariety in Man": The Frailties of Human Nature
Self-Approbation and Self-Love
"The Due Government of the Passions": Self-Control and the Temperate Self-Denial
"The Liberty of the Human Will"
"Habits of Piety and Virtue"
The Renovation of Nature and the Growth of Grace
"The Bewitching Charms of Despotic Sovereignty": The Boundaries of Power
"The Choice of Hercules": Manliness or Effeminacy?
Unbounded Passions: Ambition, Avarice, and Anger
Diversity and Order in Church and Community
Part Four - The Genteel: The Self Asserted
VI. Affectionate Families: Genteel Modes of Child-Rearing
"Our Family Circle"
"Children Much Indulged"
Surrogate Parents: Nurses and Servants in the Genteel Household
"To Curb Their Children Is to Spoil Their Genius"
From Feminine to Masculine: The Emergence of a Young Gentleman
"The Great School of the World": Educating Young Gentlemen
To Become "a Notable Housewife" and "Mother": Educating Young Ladies
"One Continued Scene of Idleness and Dissipation": The Pleasures of Genteel Youth
VII. "A Polite and Hospitable People": Themes of Genteel Temperaments and Piety
Unexamined Selves: The Outward Turning of Consciousness
The Self Indulged
Part Five - Epilogue
VIII. The Clash of Temperaments: Some Reflections on the First American Civil War
"An American Monarchy or Republic?"
Mother Country, Father-King: Perceptions of Power and Authority
The Nature of Liberty
Effeminate or Manly?: Seduction, Temptation, and Political Paranoia
A Revolution of Saints
The Republic of Virtue Rejected
Abbreviations
Notes
Permissions
Sources
Index