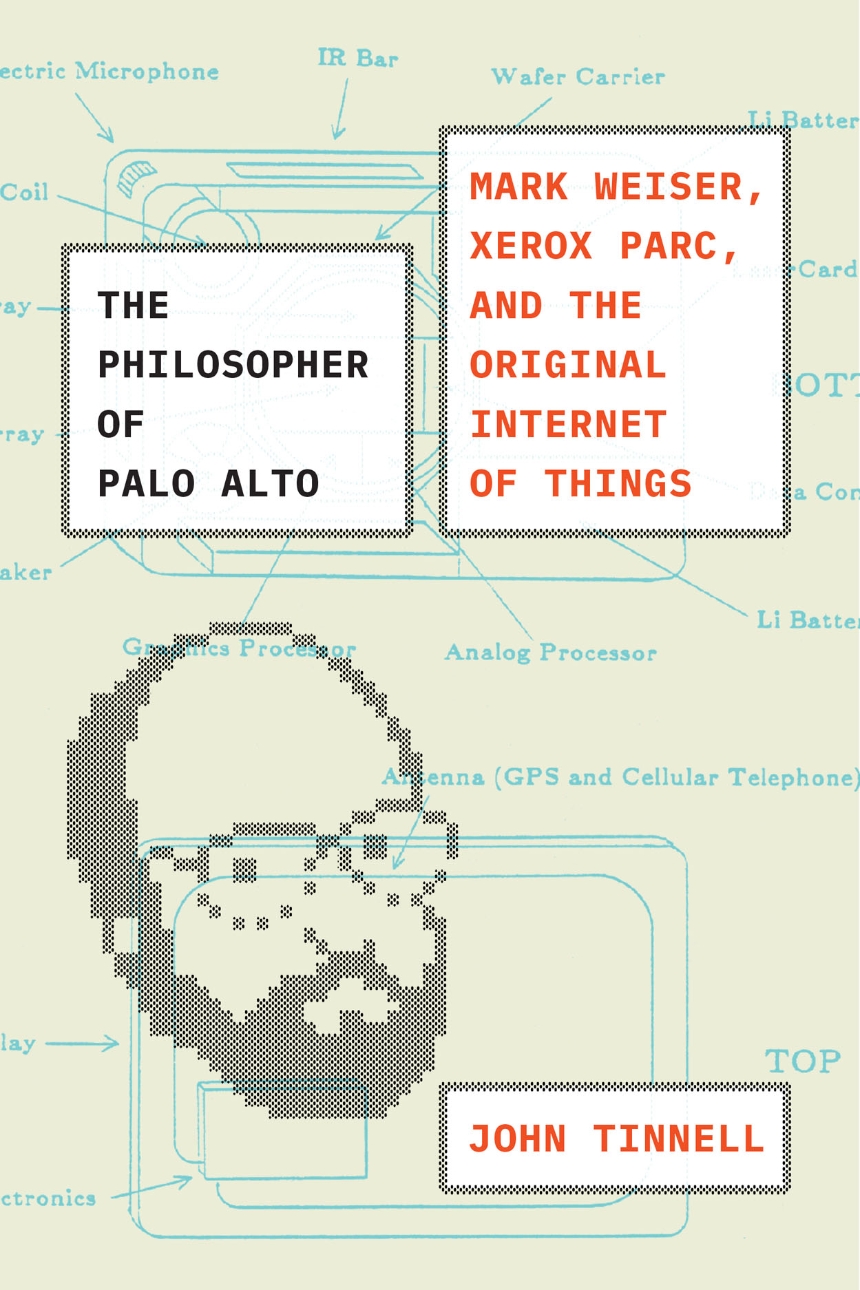 The Philosopher of Palo Alto

Mark Weiser, Xerox PARC, and the Original Internet of Things

The Philosopher of Palo Alto

Mark Weiser, Xerox PARC, and the Original Internet of Things

A compelling biography of Mark Weiser, a pioneering innovator whose legacy looms over the tech industry’s quest to connect everything—and who hoped for something better.

When developers and critics trace the roots of today’s Internet of Things—our smart gadgets and smart cities—they may single out the same creative source: Mark Weiser (1952–99), the first chief technology officer at Xerox PARC and the so-called “father of ubiquitous computing.” But Weiser, who died young at age 46 in 1999, would be heartbroken if he had lived to see the ways we use technology today. As John Tinnell shows in this thought-provoking narrative, Weiser was an outlier in Silicon Valley. A computer scientist whose first love was philosophy, he relished debates about the machine’s ultimate purpose. Good technology, Weiser argued, should not mine our experiences for saleable data or demand our attention; rather, it should quietly boost our intuition as we move through the world.

Informed by deep archival research and interviews with Weiser’s family and colleagues, The Philosopher of Palo Alto chronicles Weiser’s struggle to initiate a new era of computing. Working in the shadows of the dot-com boom, Weiser and his collaborators made Xerox PARC headquarters the site of a grand experiment. Throughout the building, they embedded software into all sorts of objects—coffeepots, pens, energy systems, ID badges—imbuing them with interactive features. Their push to integrate the digital and the physical soon caught on. Microsoft’s Bill Gates flagged Weiser’s Scientific American article “The Computer for the 21st Century” as a must-read. Yet, as more tech leaders warmed to his vision, Weiser grew alarmed about where they wished to take it.

In this fascinating story of an innovator and a big idea, Tinnell crafts a poignant and critical history of today’s Internet of Things. At the heart of the narrative is Weiser’s desire for deeper connection, which animated his life and inspired his notion of what technology at its best could be.

"In the life of Mark Weiser, John Tinnell has found a morality tale for our times. For anyone looking to understand how technology is shaping society today, The Philosopher of Palo Alto is a compelling and necessary read."

Nicholas Carr, author of The Shallows and The Glass Cage

"This riveting, up-close account reveals how one man’s dream of benevolent computing helped set us on the road to the hyper-connected, surveillance-driven nightmare we inhabit today. A deeply unsettling and cautionary tale."

Fred Turner, author of From Counterculture to Cyberculture: Stewart Brand, the Whole Earth Network, and the Rise of Digital Utopianism

"Along with Doug Engelbart’s intelligence augmentation and Alan Kay’s Dynabook, Mark Weiser’s ubiquitous computing is one of the three big concepts that Silicon Valley has fed off of for decades. Tinnell has done a wonderful job of capturing the arc of Weiser’s ideas."

John Markoff author of Whole Earth: The Many Lives of Stewart Brand

MORE THAN ONE HUNDRED BILLION THINGS are expected to be connected to the internet by 2030.1 Among them are thermostats that learn and remember, cars that navigate and intervene, doorbells that observe and alert, and mattresses that calculate and self-adjust. Ever since cell phones became smartphones, technologists and consumers in high-tech societies have come to embrace all manner of smart objects with astonishing speed. Connectivity has spread rapidly from personal computers into parking lots, toilets, eyeglasses, and kitchens. Roughly ten thousand websites were online in 1994; soon, appliance manufactures expect to sell two million Wi-Fi-enabled refrigerators per year.

Over the past fifty years, this once-eccentric longing to animate the inanimate has become a global enterprise. Computer scientists have progressed quickly from the first bona fide “connected device” in 1970 to twenty-first-century designs for wholly connected “smart cities.”
Technologists often trace the Internet of Things’ humblest beginnings to a Carnegie Mellon University soda machine, which had been rewired by professors who wished to monitor its exact contents from their offices. Carnegie Mellon’s Computer Science Department reportedly drank “120 bottles of Coca-Cola products each day” in 1970; too often, the faculty found themselves ascending the stairs to their building’s third floor only to find the soda machine empty. It is hardly a stretch to see a reflection of that empty soda machine in the problems that more recent Internet of Things devices aim to solve. Many so-called smart products hitting the market remain devoted to tackling life’s trivial irritations. In his 2015 Atlantic essay “The Internet of Things You Don’t Really Need,” Ian Bogost lampooned his pet case in point: a mobile app-sensor system called “Smart GasWatch” that leveraged Bluetooth technology to allow its customers to check the level of their grill’s propane tank using their smartphones, rather than a mechanical gauge or several other cheaper means. “Today,” Bogost wryly observed, “the relevance of any consumer product requires the addition of superfluous computing.” Household gadgets have traded largely on our eagerness to be always within a glance of digital metrics that help us feel more in command, even when eyeing this data makes little difference.

But the race to render everything smart—sensor laden, data rich, instantly adjustable—has moved far beyond the stuff of backyards and bedrooms. The most ambitious North American plan to date surfaced in October 2017, in Toronto, where city officials launched a partnership with Google’s Sidewalk Labs to create a city-within-the-city “built from the Internet up,” on a languishing industrial stretch of waterfront called Quayside. Sidewalk Labs’ proposal laid out a thoroughgoing merger between urban infrastructure and new tech. Enhanced sidewalks would instantly heat away snow while also gathering information about everybody who traversed them. An AI-driven electrical grid and autonomous transit system would give off 89 percent fewer green house gas emissions than Toronto’s existing neighborhoods. Nothing would go unmeasured or unmonitored. Inefficiency, waste, and discomfort would be minimized with religious zeal. Google cofounder Larry Page and Canadian Prime Minister Justin Trudeau both insisted that an omniscient city could radically boost its residents’ quality of life. Trudeau was especially bullish, stating at the project’s onset: “I have no doubt Quayside will become a model for cities around the world.” Improvements across all municipal services that might otherwise take months or years to discuss and implement would roll out swiftly and continuously thanks to the new wellsprings of citizen data that Sidewalk Labs pledged to unearth and analyze.

Unsurprisingly, the project’s announcement raised concerns from a slew of critics worried about the fate of human agency in such an environment. As urbanists, academics, and journalists combed through the proposal, they developed a bleak perspective on the big picture. At the same time, Google began to make greater demands. The twelve-acre Quayside parcel that it initially agreed on suddenly appeared too small. Sidewalk Labs, with Google’s backing, pushed to expand the footprint to 165 acres, giving them room to build a new Canadian Google head-quarters and reason enough to allocate $1.3 billion Canadian. Much of Toronto interpreted the move as an act of aggression, and the critics aired their objections to receptive ears. (...)

Some of the plan’s more disconcerting aspects were not entirely futuristic. For several years already, advances in “insurtech” had brokered a data-driven relationship with insurance policyholders that predated Googleville’s envisioned social contract. In 2014, the New York Times ran a story about “subprime” borrowers who consented to have a “starter interrupt device” installed on their vehicles in order to retain their auto insurance.8 This gadget enabled insurers to keep tabs on the borrower’s vehicle at all times, even granting them power to remotely shutdown the vehicle’s engine in response to observed policy breaches. The story caught the attention of Jathan Sadowski, a technology scholar who proceeded to examine all the subtle ways corporations were beginning to experiment with smart devices. Akin to the auto-starter interrupter, there was a smart toothbrush sold by Beam Technologies that captured data about its users’ every brushing (duration, performance rating, time of day) and transmitted it to Beam’s dental insurance staff. After taking inventory of many such practices cropping up in a wide range of sectors, including advertising and policing, Sadowski had heaps of evidence lending dramatic weight to his general conclusion: “With detailed data monitoring comes the power of behavioral modification.”