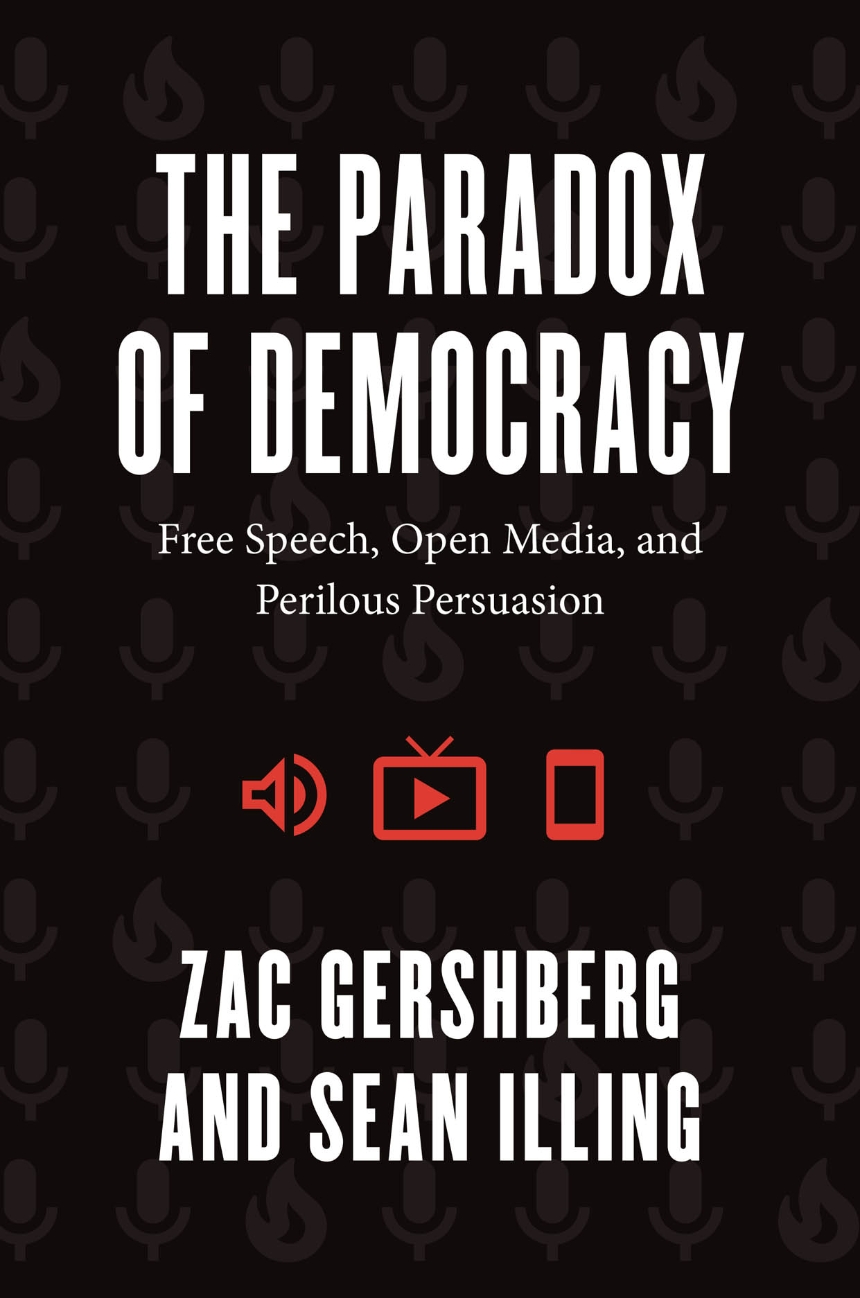 The Paradox of Democracy

The Paradox of Democracy

A thought-provoking history of communications that challenges ideas about freedom of speech and democracy.

At the heart of democracy lies a contradiction that cannot be resolved, one that has affected free societies since their advent: Though freedom of speech and media has always been a necessary condition of democracy, that very freedom is also its greatest threat. When new forms of communications arrive, they often bolster the practices of democratic politics. But the more accessible the media of a society, the more susceptible that society is to demagoguery, distraction, and spectacle. Tracing the history of media disruption and the various responses to it over time, Zac Gershberg and Sean Illing reveal how these changes have challenged democracy—often with unsettling effects.

The Paradox of Democracy captures the deep connection between communication and political culture, from the ancient art of rhetoric and the revolutionary role of newspapers to liberal broadcast media and the toxic misinformation of the digital public sphere. With clear-eyed analysis, Gershberg and Illing show that our contemporary debates over media, populism, and cancel culture are not too different from democratic cultural experiences of the past. As we grapple with a fast-changing, hyper-digital world, they prove democracy is always perched precipitously on a razor’s edge, now as ever before.

"A book that provides valuable context for the latest assaults on democracy. . . . A clear and informative history."

"A compelling and sober-minded assessment of our situation, and I commend it to you for your consideration."

"In The Paradox of Democracy: Free Speech, Open Media, and Perilous Persuasion, Gershberg and Illing suggest that democracy isn’t really about the rules and institutions that usually leap to mind... Fundamentally, they say, democracy is a culture of free and open communication. And that openness makes it vulnerable to subversion from within."

"We are living through an information revolution, but we have not adequately understood how this tsunami reshapes democratic politics. Sean Illing and Zac Gershberg do just that in this very interesting and intriguing book."

"The Paradox of Democracy is as provocative as it is unpredictable. It carefully and engagingly expands our understanding of how democracy works—and struggles—in a society where free expression is foundational and where media is undergoing revolutionary and rapid change. It will change how you think."

"As free speech advocates strain to reconcile the unparalleled access to information and the expression of ideas made possible by the internet with their undeniable potential for political, psychological, and even physical harm, Gershberg and Illing have come to say that these advocates are pushing a Sisyphean boulder up a mountainside... Though the authors insist that democracy is the best system there is, they clearly doubt, in Benjamin Franklin's words, 'we can keep it.' ... Recommended."

Introduction
Chapter 1: The Bias and the Disruption
Chapter 2: Mere Rhetoric: From Free Speech to Bread and Circuses
Chapter 3: The News-Print Revolution
Chapter 4: The Rise of the Public(s): From a Fuller World to Morse’s Macrocosm
Chapter 5: This Is Fascism
Chapter 6: Playing Checkers: An Uneasy Triumph for Liberal Democracy
Chapter 7: The Death of Liberal Democracy: Have We Got Fake(d) News for You
Chapter 8: Democracy, If We Can Keep It
Epilogue
Notes
Index
Excerpt

This book makes an unconventional claim about democracy. In almost every major work on the subject, democracy is reduced to a body of institutions and practices. We are told, time and again, that the touch-stone of any democratic society is the universal right to vote and a government that enshrines the law. This description isn’t wrong so much as narrow; it identifies the core features of democracy, but it doesn’t capture the constitutive condition of this type of society. Moreover, it’s better to think of democracy less as a government type and more as an open communicative culture. Democracies can be liberal or illiberal, populist or consensus based, but those are potential outcomes that emerge from this open culture. And the direction any democracy takes largely depends on its tools of communication and the passions they promote. This is more than an academic distinction. To see democracy as a culture of free expression is to foreground its susceptibility to end-less evolution, even danger.

We call this the paradox of democracy: a free and open communication environment that, because of its openness, invites exploitation and subversion from within. This tension sits at the core of every democracy, and it can’t be resolved or circumnavigated. To put it another way, the essential democratic freedom—the freedom of expression—is both ingrained in and potentially harmful to democracy. We state this at the outset because it helps frame everything that follows. More than a regime or a governing philosophy, democracy is both a burden and a challenge. Like the Greek mythological hero Sisyphus, who was condemned by the gods to roll a rock up a hill for all eternity, democracy is an unwieldy boulder continually throwing us back into an absurd situation. No matter what we do or how hard we push, the boulder persists. Democracy is dangerous for precisely this reason, which presents not just a collective- action problem but a genuine existential dilemma: it demands that we take responsibility for the situation in which we find ourselves. Democracy has no defined purpose, and it is shaped in real time by the communicative choices of individual citizens and politicians. But it offers no guarantees of good governance or just outcomes.

The belief that democracy is a fixed system with inherent features has led to a lot of confusion. Most people still hold what’s often called the folk theory of democracy: ordinary citizens have preferences about what the government ought to do; they elect leaders who will carry out those preferences and vote against those who will not. In the end, we’re left with a government that more or less serves the majority. And all this is supposed to take place in a culture of rules and norms that privileges minority rights, respects the rule of law, and welcomes peaceful transitions of power. But that culture is precisely what we call liberalism—it’s not democracy as such. Confusion on this point has obscured the nature and demands of democratic life.

So this book is largely our attempt to see democracy with clear and unforgiving eyes. It is descriptive. We linger on democracy’s weak-nesses and contradictions while insisting it remains the best form of politics because it affords freedom of expression and the possibility of confronting power in all its forms—that’s democracy’s claim to supe-riority over all other political cultures. Citizens no less than politicians have a voice through what they say and publish, how they assemble and mobilize, and how they vote. But democratic freedom can be self- negating because persuasion is the operative variable. Governments, even democratic governments, can elect to constrain the voice of the people and limit who gets to count as a citizen. New media open up new rhetorical styles in political discourse, and bad politics ensue.

The ancient Greeks understood this long before us, and they even developed two frameworks for free speech that highlighted the problem. Isegoria described the right of citizens to equal participation in public discourse; parrhesia described the right of individuals to say anything they wanted, whenever they wanted, and to whomever they wanted. As chapter 2 explains, isegoria created the political environment of democracy, while parrhesia actualized it. But the right to say anything opened the door to all manners of subversion, which has been a challenge to every democracy ever since. The emergence of isegoria in Athens, for instance, was accompanied by the joint rituals of ostracism and tribalism. In today’s language, you might say that Socrates was the first democratic citizen to be “canceled” by the same democratic forces that made his speech free in the first place. This is the defining tension of any democratic society, and citizens and politicians alike are forced to navigate it. Just as Sisyphus makes that rock meaningful by owning it, so we propel democracy by freely communicating with others. But the paradox we’re going to outline makes this task enormously difficult. Our communicative environment, which lays the foundation for shared meaning, is unruly and continually upended by media innovation and treacherous politics that send the boulder of democracy rolling back down the hill.

Citizens, philosophers, and politicians have always fretted about democracy for exactly this reason. Although it facilitates a culture in which deliberative discourse and collective judgment are possible, it can also be gamed, prompting crises from within. The panic today over democracy is no different. Since 2016, a whole genre of literature has emerged in books and essays seeking to explain how democracies fall or why Western liberalism is in retreat. The consensus is that if democracy isn’t quite dead, it’s certainly under attack. We are surely living through a period of intense democratic disruption. All over the world, from India to Hungary to Turkey to Brazil to the United States, democratic cultures have been disordered. What we’re witnessing is a convergence of various forces unleashed by novel media and populist rhetorical styles that implode democracy from within.

Our goal is not to diminish the reality of the crisis before us. Liberal democracy, as a culturally dominant time, has died. So have many of the norms and institutions that undergirded it. But the discourse around this problem is far too circumscribed. To read many of the current books about democracy is to walk away with the impression that we’re in the midst of something new, something unique to our moment. It’s as though the default state of democracy is stability, and periods of disruption are the exception. But the reverse is much nearer the truth. At the very heart of democracy is a contradiction that cannot be re-solved, one that has affected free societies from ancient Greece to con-temporary America. To function, democracies require more than just voting. Citizens are afforded access to information and an open system of debate. But throughout history, when new forms of communications arrive—from the disingenuous use of sophistic techniques developed in Athens to the social media–enabled spread of propaganda we see today—they often undermine the practices of democratic politics. The more widely accessible the media of a society, the more susceptible that society is to demagoguery, distraction, and spectacle. We see this time and again: media continually evolve faster than politics, resulting in recurring patterns of democratic instability.

Classical rhetoric was a necessity for the early democratic cultures of Athens and Rome—but sophistry, a form of deceptive, crowd-pleasing speech, overwhelmed both societies and hastened their collapse. The printing press allowed for the mass production of books and the creation of newspapers, which ushered in the Enlightenment and the democratic revolutions of the eighteenth century—yet these public networks also sowed chaos in the aftermath of the American and French Revolutions. The former was able to negotiate a deeply partisan press that threatened the viability of the United States in its infancy, but France exploded into the violent Reign of Terror. In the nineteenth century, the penny press and the telegraph’s speedy dissemination of news collapsed geographic distances and helped spread the norms of liberal society across Europe—but it also fomented nationalist discourses. Political leaders and news outlets generated narratives full of nativist fears and petty resentments to gain traction in place of deliberative debate, and the appeals of this mediated rhetoric would eventually lead Europe toward World War I. While cinema and radio further opened media and created a more accessible mass culture, they also provided essential platforms for European fascists to overwhelm democracy into totalitarianism. Television transformed politics so citizens could directly see and listen to their representatives, with many positive results, but the imperatives of the medium also shaped politics as much as covered it. To succeed, politicians in the televisual era needed to adapt to a new incentive structure, in which superficial branding, sound bites, and optics predominated.