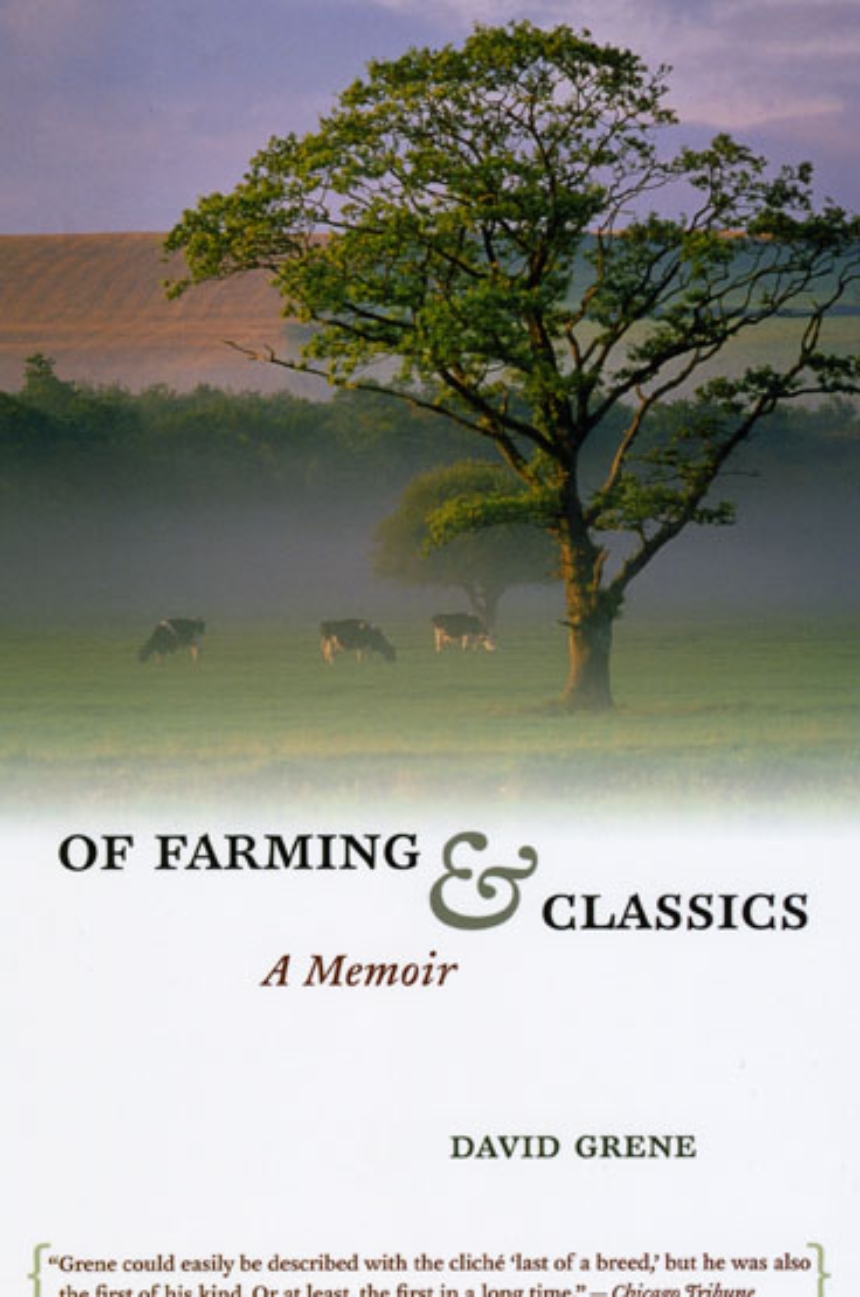 Of Farming and Classics

Of Farming and Classics

A fiercely independent thinker, colorful storyteller, and spirited teacher, David Grene devoted his life to two things: farming, which he began as a boy in Ireland and continued into old age; and classics, which he taught for several decades that culminated in his translating and editing, with Richmond Lattimore, of The Complete Greek Tragedies.

In this charming memoir, which he wrote during the years leading up to his death in 2002 at the age of eighty-nine, Grene weaves together these interests to tell a quirky and absorbing story of the sometimes turbulent and always interesting life he split between the University of Chicago—where he helped found the Committee on Social Thought—and the farm he kept back in Ireland.

Charting the path that took him from Europe to Chicago in 1937, and encompassing his sixty-five-year career at the university, Grene’s book draws readers into the heady and invigorating climate of his time there. And it is elegantly balanced with reflections stemming from his work on the farm where he hunted, plowed and regularly traveled on horseback to bring his cows home for milking. Grene’s form and humor are quite his own, and his brilliant storytelling will enthrall anyone interested in the classics, rural Ireland, or twentieth-century intellectual history, especially as it pertains to the University of Chicago.

“The quirky and brilliant David Grene, one of the founding members of the Committee on Social Thought, has written a quirky and brilliant memoir. Setting out the path that took him to the University of Chicago in 1937 and encompassing his subsequent sixty-five-year association with that institution, Grene gives us one of the preeminent general accounts of intellectual life in the twentieth century.”

“Distinguished and imaginative. This memoir’s idiosyncrasy and its engagement with ideas make it an absorbing read, partly because David Grene’s personality was evidently unusual and compelling, and partly because he has such a vivid way of making the reader imagine his experiences and attend to his reflections.”

“David Grene’s writing is powerful, simple, and elegant. The personalities he presents are vivid, fascinating, and important. Above all shines through his own personality, his joy of living and intense appreciation of friends.”

"The late David Grene’s small memoir tries to explain how, at least in the case of one exemplary life, farming and classics enhanced each other. . . . Grene reminds us of two crucial aspects of modern life exemplified by this rare individual. First is the symbiosis between the life of contemplation and action — and just how it is that hard physical and dirty work offers real value in rediscovering nature, bringing with it a certain pragmatism that permeates reading and thinking. . . .Second, Grene reminds us of what constitutes success in life."

"David Grene’s legacy . . . is the effect of his teaching and enthusiasm on his students, who have passed it on to their students. I am certain that his published recollections will cause him to be rememberd by readers not fortunate enough to have known the man."

“David Grene could easily be described with the cliché ‘last of a breed,’ but he was also the first of his kind. Or at least, the first in a long time. . . . His personal style reincarnated that of the Roman artistocrats, with their love of the soil and taste for good books. . . . Of Farming & Classics delightfully recounts an era before corporate agriculture did in the family farm and pettifogging professionalism insulated the ivory tower from the larger world.”

“An illuminating read for every classical scholar engaged with the current quest for the subject’s roots, and the excavation of the way that it has evolved over the past century and a half.”

"A minor classic by a major classicist."

"This little gem . . . calls more for notice than formal review. It is beautifully written and (I found) compulsively readable."

"Grene comes across in these pages as an extraordinary man whose great intellect was coupled with humility and wide-ranging curiosity. His writing is dense, but precise and thoughtful, as if each sentence was polished until it carried its burden of meaning as perfectly as possible. It is an old-fashioned sort of writing, perhaps, but then Mr. Grene lived an old-fashioned sort of life."