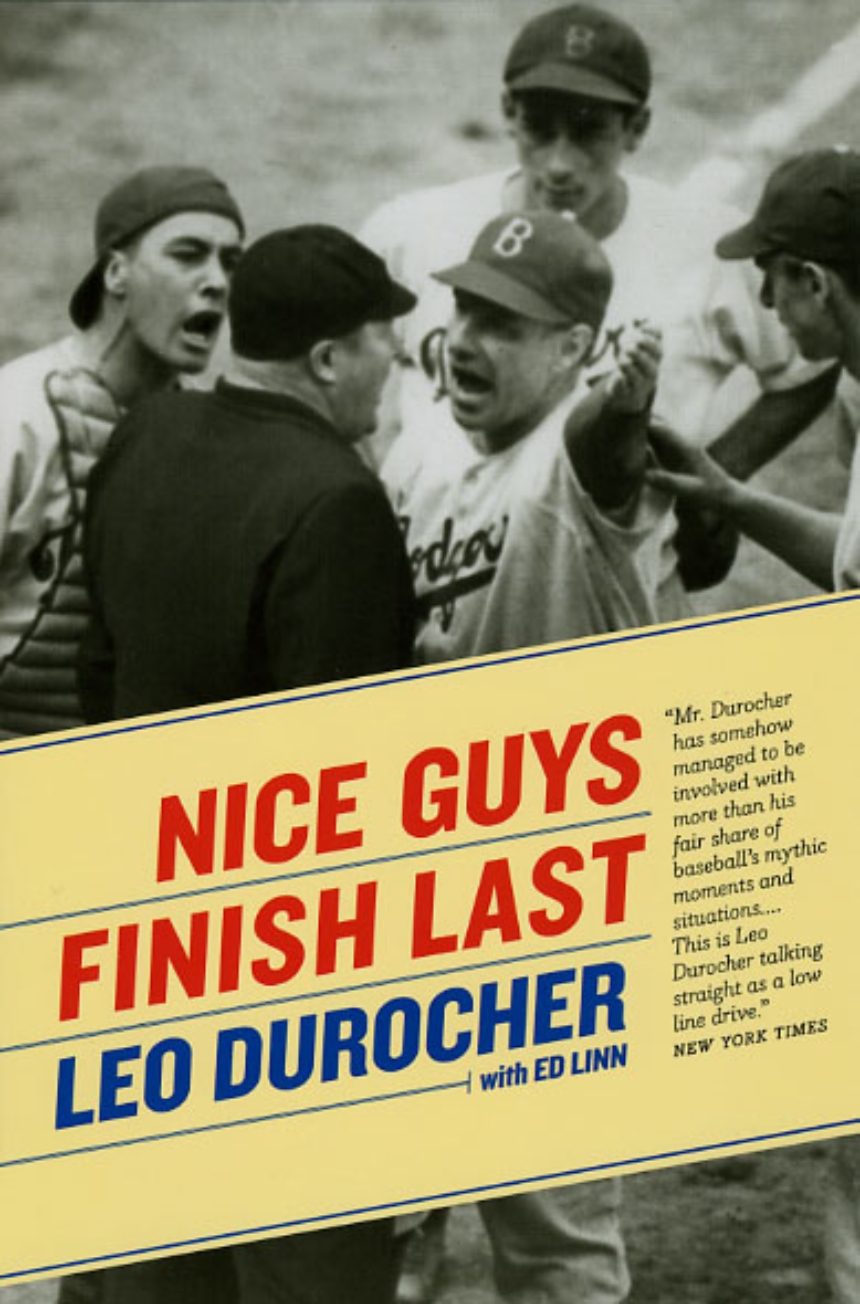 “I believe in rules. Sure I do. If there weren't any rules, how could you break them?”

The history of baseball is rife with colorful characters. But for sheer cantankerousness, fighting moxie, and will to win, very few have come close to Leo “the Lip” Durocher. Following a five-decade career as a player and manager for baseball’s most storied franchises, Durocher teamed up with veteran sportswriter Ed Linn to tell the story of his life in the game. The resulting book, Nice Guys Finish Last, is baseball at its best, brimming with personality and full of all the fights and feuds, triumphs and tricks that made Durocher such a success—and an outsized celebrity.

Durocher began his career inauspiciously, riding the bench for the powerhouse 1928 Yankees and hitting so poorly that Babe Ruth nicknamed him “the All-American Out.” But soon Durocher hit his stride: traded to St. Louis, he found his headlong play and never-say-die attitude a perfect fit with the rambunctious “Gashouse Gang” Cardinals. In 1939, he was named player-manager of the Brooklyn Dodgers—and almost instantly transformed the underachieving Bums into perennial contenders. He went on to manage the New York Giants, sharing the glory of one of the most famous moments in baseball history, Bobby Thomson’s “shot heard ’round the world,” which won the Giants the 1951 pennant. Durocher would later learn how it felt to be on the other side of such an unforgettable moment, as his 1969 Cubs, after holding first place for 105 days, blew a seemingly insurmountable 8-1/2-game lead to the Miracle Mets.

All the while, Durocher made as much noise off the field as on it. His perpetual feuds with players, owners, and league officials—not to mention his public associations with gamblers, riffraff, and Hollywood stars like George Raft and Larraine Day—kept his name in the headlines and spread his fame far beyond the confines of the diamond.

A no-holds-barred account of a singular figure, Nice Guys Finish Last brings the personalities and play-by-play of baseball’s greatest era to vivid life, earning a place on every baseball fan’s bookshelf.

“The delight of the book is its exuberance, its sense of a life lived at full tilt. . . . Durocher is a first-class raconteur.”

“Hypnotic. . . . Durocher fought and scratched and made enough enemies so that one season he was expelled from baseball ‘for conduct detrimental to the game.’”--Esquire

“Mr. Durocher has somehow managed to be involved with more than his fair share of baseball’s mythic moments and situations. . . . This is Leo Durocher talking straight as a low line drive, not Leo Durocher ghosted up for Little Leaguers to hero-worship and copy. . . . If certain reputations lose out, the color and magic of baseball’s past comes out a winner.”--New York Times

"If you love the old baseball stories . . . if you like the romance and swagger and tough talk of bnaseball in the pre-corporate skybox era, this is fun. Especially if you skip the stuff about the Cubs."

Book I: The Good Old Days
I Come to Kill You
The Drummer Boy
Strong Minds and Weak Backs
"What If It Doesn’t Rain?"
The Gas House Gang
The Manager of the Brooklyn Dodgers
The First Pennant in 21 Years
The Second Guess—the Great National Pastime
The Ballad of Van Lingle Mungo
I Once Won an Argument with an Umpire

Book II: The Days of Trial and Glory
Jackie
Mr. Rickey
A Night Flight to Columbus
A Hamfat Politician Named Happy
Hello Horace, Goodbye Ebbets Field
My Kind of Team
How to Become a Miracle Manager
The Eye-talian Street Singer and a Couple of Other Heavy Hitters

Book III: The New Breed
How I Didn’t Become Manager of the St. Louis Cardinals, Etcetera
Something Good Is Going to Happen Tomorrow
Mister Cub
The Santo Explosion
It Can’t Be Happening to Me Again
The Diminishing Manager
Whatever Happened to Sit Down, Shut Up and Listen?