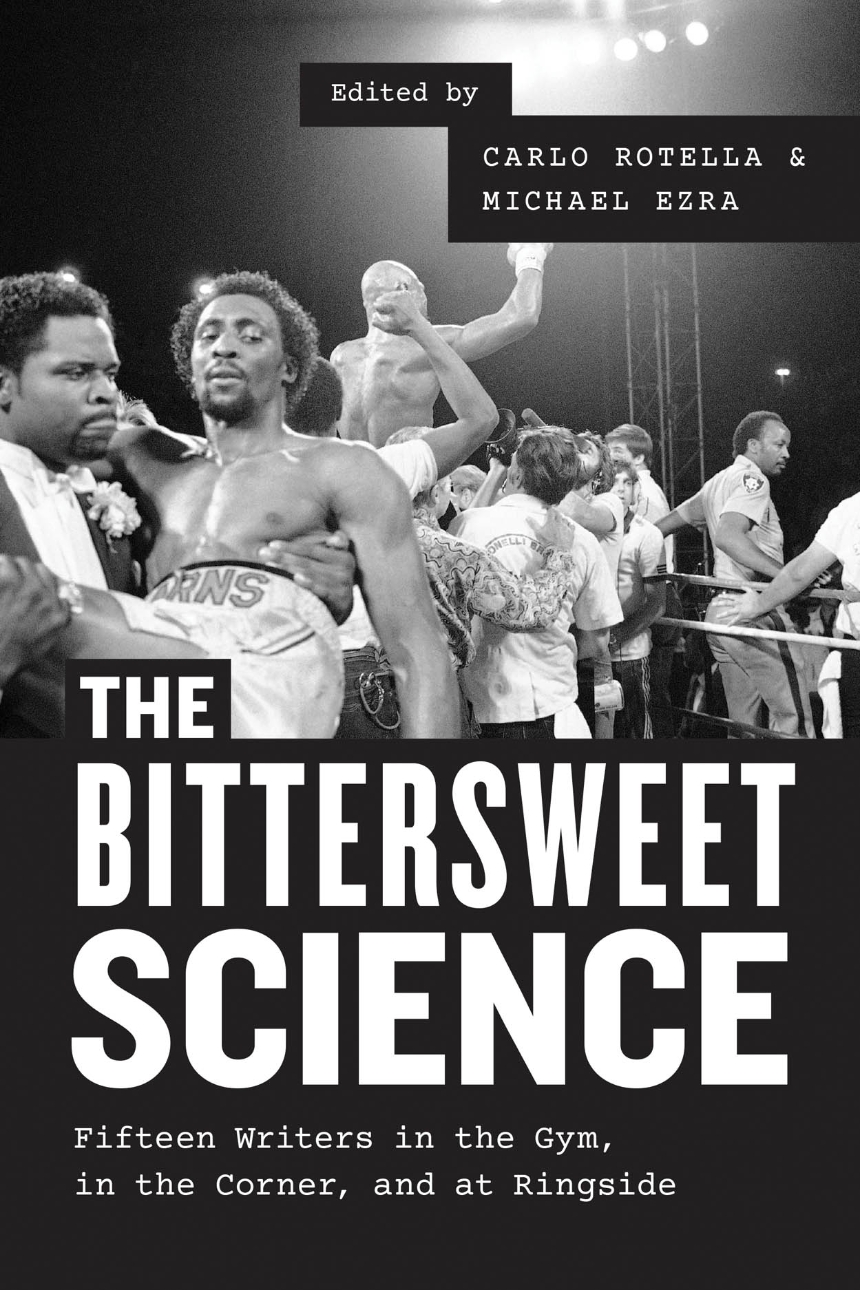 Fifteen Writers in the Gym, in the Corner, and at Ringside

Fifteen Writers in the Gym, in the Corner, and at Ringside

Weighing in with a balance of the visceral and the cerebral, boxing has attracted writers for millennia. Yet few of the writers drawn to it have truly known the sport—and most have never been in the ring. Moving beyond the typical sentimentality, romanticism, or cynicism common to writing on boxing, The Bittersweet Science is a collection of essays about boxing by contributors who are not only skilled writers but also have extensive firsthand experience at ringside and in the gym, the corner, and the ring itself.

Editors Carlo Rotella and Michael Ezra have assembled a roster of fresh voices, ones that expand our understanding of the sport’s primal appeal. The contributors to The Bittersweet Science—journalists, fiction writers, fight people, and more—explore the fight world's many aspects, considering boxing as both craft and business, art form and subculture. From manager Charles Farrell’s unsentimental defense of fixing fights to former Golden Glover Sarah Deming’s complex profile of young Olympian Claressa Shields, this collection takes us right into the ring and makes us feel the stories of the people who are drawn to—or sometimes stuck in—the boxing world. We get close-up profiles of marquee attractions like Bernard Hopkins and Roy Jones Jr., as well as portraits of rising stars and compelling cornermen, along with first-person, hands-on accounts from fighters’ points of view. We are schooled in not only how to hit and be hit, but why and when to throw in the towel. We experience the intimate immediacy of ringside as well as the dim back rooms where the essentials come together. And we learn that for every champion there’s a regiment of journeymen, dabblers, and anglers for advantage, for every aspiring fighter, a veteran in painful decline.

Collectively, the perspectives in The Bittersweet Science offer a powerful in-depth picture of boxing, bobbing and weaving through the desires, delusions, and dreams of boxers, fans, and the cast of managers, trainers, promoters, and hangers-on who make up life in and around the ring.

“The volume overall does a nice job of covering different contexts of boxing, from the gym to the business side. There aren’t a lot of the old glorious ‘bang bang pow’ types of accounts here. The champions fall and eventually die. The underdogs grind and suffer. It’s not a Rocky account, Marciano or Balboa.”

Ear to the Ground Books

"Imagine the difference between watching a boxing match and being in one. The same could be said of the difference between reading about it in the new book The Bittersweet Science and in any previous publications on pugilism. . . . There's an amazing range in their subjects. . . . The book will likely be as fascinating to hardcore fans of boxing as it will to those with just a minor curiosity."

“Gritty and smart, this championship card replaces Liebling’s The Sweet Science for me because it comes from the inside and the sweat tastes real.”

Robert Lipsyte, author of The Contender

“A perfect rejoinder to those who might question the continued justification for boxing, both as human activity and as belletristic fodder. By approaching its subject at inventive, even unprecedented angles, this superb collection manages something novel regarding this inexhaustible topic, ‘the sport all others aspire to.'  But just as boxing isn’t really a sport, no one plays it, these essays can’t help but exceed their topic to skillfully and intelligently treat violence and courage and human will and craft and the ultimate inevitable decay we all face. The result simultaneously instructs, disturbs, and maybe even emboldens.”

“The insightful and innovative true tales of The Bittersweet Science leave one wanting more. It’s a terrific read for all who think they already know boxing, as well as for those fascinated to learn more about it.”