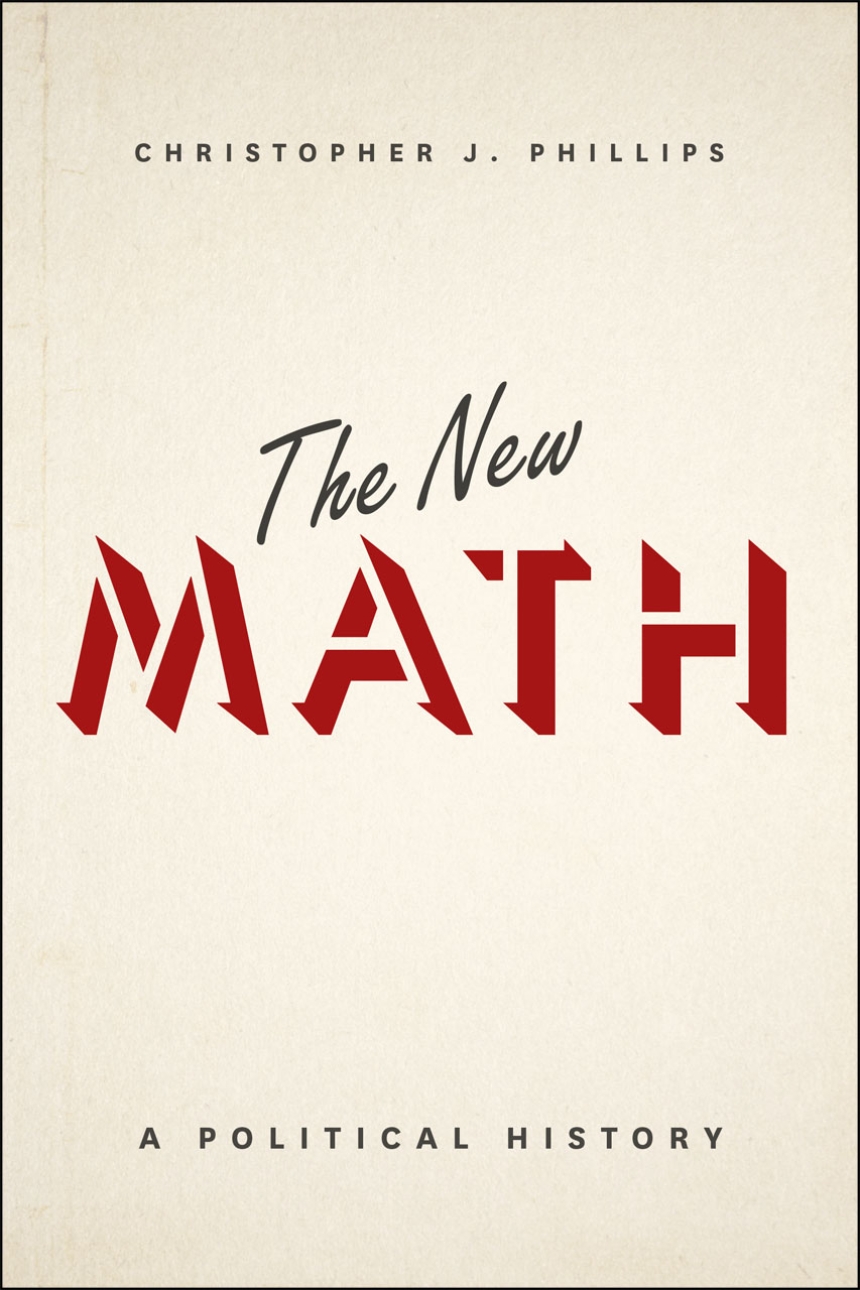 An era of sweeping cultural change in America, the postwar years saw the rise of beatniks and hippies, the birth of feminism, and the release of the first video game. It was also the era of new math. Introduced to US schools in the late 1950s and 1960s, the new math was a curricular answer to Cold War fears of American intellectual inadequacy. In the age of Sputnik and increasingly sophisticated technological systems and machines, math class came to be viewed as a crucial component of the education of intelligent, virtuous citizens who would be able to compete on a global scale.

In this history, Christopher J. Phillips examines the rise and fall of the new math as a marker of the period’s political and social ferment. Neither the new math curriculum designers nor its diverse legions of supporters concentrated on whether the new math would improve students’ calculation ability. Rather, they felt the new math would train children to think in the right way, instilling in students a set of mental habits that might better prepare them to be citizens of modern society—a world of complex challenges, rapid technological change, and unforeseeable futures. While Phillips grounds his argument in shifting perceptions of intellectual discipline and the underlying nature of mathematical knowledge, he also touches on long-standing debates over the place and relevance of mathematics in liberal education. And in so doing, he explores the essence of what it means to be an intelligent American—by the numbers.

“The New Math sheds light on a time when changing political commitments were affecting what it meant to be prepared—mathematically—for citizenship in a modern, technology-laden society. . . .  The book is based on extensive research and is incredibly well documented. . . . Likely to stand for a long time as the most thorough, authoritative account of this mid-twentieth-century phenomenon.”

“Phillips reminds us in his fascinating book that even though mathematics is supposed to be apolitical, the teaching of it is anything but.”

“Phillips unravels and unfolds complex interactions between political issues, school practices, power structures, struggles about learning, curriculum, and the nature of mathematics and their significance for the rise and fall of the new math. He conceives of the new math as a site where—and a lens through which—the changing politics of midcentury America are instantiated and made visible. . . . Phillips’s book is very well documented, well argued, and well written. It is a scholarly piece of research, drawing extensively on archival sources, and it will remain a standard reference for future research into the phenomenon of the new math.”

“Noted. . . . Phillips examines how new forms of teaching and mathematics in the 1950s and ’60s [were] a reaction to Cold War tensions.”

“If you’re an American between the ages of 45 and 70, your teachers likely subjected you to the ‘new math,’ a classroom fad that deemphasized memorization and calculation (e.g., times tables) in favor of abstract logic (number systems, proving theorems). Phillips’s history traces the new math craze from its roots as a post-Sputnik push to shore up American kids’ science and math skills—and, by training them to reason ‘rigorously,’ to inoculate them against Communism. . . . Phillips’s book argues that children’s math education will continue to be the fulcrum of great political shifts. These debates will of course be exploited energetically by parents and politicians—who in most cases have forgotten whatever math they once knew.”

“Importantly, The New Math explores not just the production of these textbooks but also what happened when they were actually brought into American classrooms and engaged by teachers, students, and parents. As a result, in addition to being a fascinating political history it’s also a model of how we can treat the archaeology of the classroom as a way to approach the history of science.”

“Reacting to the Soviet launch of Sputnik in 1957 as a wake-up call, the United States provided extensive funding for the development of the ‘new math.’ Unfortunately, the impetus to better prepare the nation’s students for a more technical future gave way to a twenty-year path littered with educators’ resistance, parental confusion, public ridicule, and declining test scores. Phillips carefully presents this journey, starting with the politically driven funding to develop secondary mathematics programs that would emphasize conceptual understanding over computation. The well-documented book provides insight regarding the initial overhaul of the curriculum, primarily focusing on the School Mathematics Study Group (SMSG). Changes to the elementary-level programs were not originally part of the National Science Foundation funding, and Phillips describes how this evolved as well.  He further explains how this national curriculum effort created challenges—adequate teacher training, costly textbook adoption, and consistency of delivery despite the best of intentions with which the movement was founded.  The epilogue comments briefly on the post-new-math years, including the introduction of the National Council of Teachers of Mathematics (NCTM) standards. Overall, the presentation is well reasoned, compelling, and informative. . . . Highly recommended.”

“When conservatives and liberals fight about school curriculum, the disagreements aren’t just about science and history. Even math has been a battleground in the culture wars.”

Us & Them, a podcast hosted by Trey Kay

“Thoroughly researched. . . . A much better guide than the folklore that exists about new math.”

“The New Math is well written, well documented, and well contextualized. . . . This gem of a book uses its ephemeral topic to shed light on the broader entanglement of knowledge, politics, ideology, and citizenship at the height of the Cold War.”

“By unifying his examination of the politics affecting the rise and fall of the new math with the specifics of the actual curricular changes, Phillips provides a valuable historical perspective on a curricular issue that continues to bedevil mathematicians and math teachers alike. Years after the back-to-basics movement steamrolled the new math, elements of the reform, especially its commitment to teaching abstract reasoning, remained a component of public school math curricula in schools throughout the United States. Returning in the form of the ‘math wars’ of the 1990s, as well as current debates over Common Core math standards, the SMSG’s work may have come and gone, but its legacy remains with us today.”

“In light of the country’s frantic push for school accountability and higher student performance on standardized examinations in recent years, one wonders how contemporary conflicts over academic rigor and citizenship fit into this larger historical narrative. Phillips has given us an exceptionally engaging and insightful foundation for exploring those connections.”

“The New Math is not strictly for history buffs. There are several parallels between the New Math era as described in the book and today’s reform efforts, chief of which is the assertion that increased attention to mathematics and science (i.e., the STEM of today) will guarantee the United States’ international standing. . . . The lessons of the New Math era are instructive for us today, and that is why this is an important book.”

“Phillips cogently makes the case that the rise and fall of the New Math movement traces our cultural mores and larger political beliefs about who should be making decisions in our society. . . . I highly recommend Christopher Phillips’ book. His writing is clean and compelling, and the story is engaging and compact.”

“One of the more intriguing aspects of the book is how resistant much of the political discussion surrounding it is to being mapped onto contemporary American political divides. The rhetoric of the New Math advocates, to modern ears, gives off a progressive or even new-age sensibility, with its aversion to rote memorization and its emphasis on deep-rooted understanding. The reality, however, as The New Math makes clear, is that the New Math movement was decidedly conservative and nationalistic in nature. . . . And here is where The New Math gets really interesting; it turns out that the nationalistic, reactionary, anti-Soviet impetus behind the creation of the New Math was not, in fact, the creation of better engineers, but rather the creation of better citizens. . . . The contradictions here, in light of today’s political climate, are fun to poke at. One could certainly hope that those in politics proudly branding themselves as anti-intellectual will discover that their idols once averred that the way to further their nationalistic ends was through a system of universal education that emphasized careful, rational thought and conceptual understanding (it’s pretty to think so, anyway).”

“Mathematics educators . . . —knowledgeable veterans and newcomers to the field—will find Phillips’s retelling of the new math story a fascinating read that is filled with timeless insights into the academic and political dynamics of school mathematics and, more broadly, American education.”

Journal for Research in Mathematics Education

“Phillips’s exposition of what the new math meant and how, in practice, it was taught are definite strengths of his book. He reveals unexpected dimensions of the controversy it generated. Its champions in the classroom put more stress on forming free, rational citizens than on raising the level of technical competence in America, while the opposition came not only from defenders of rote learning, but equally from mathematicians who focused on the instrumental value of mathematics for science and technology.”

“At the intersection of the history of science and history of education, The New Math offers a compelling argument for understanding curriculum reform efforts in mathematics within the context of postwar/Cold War America. Making sense of these reform efforts as a response to the American experience after the war—including the efforts to return to normalcy, the rise of mass/consumer culture, the explosion of an unsettling (for adults) new youth culture, the expansion of secondary education, and the ascendancy of academic (particularly scientific and technical) expertise—enables the story of the new math reforms to shed a broader light on the political and cultural changes taking place during this period. This story provides insights into public perceptions of expertise and the perceived role of the academic (or any kind of) expert in American culture. A quality piece of scholarship.”

John L. Rudolph, University of Wisconsin-Madison | author of "Scientists in the Classroom: The Cold War Reconstruction of American Science Education"

“‘New Math’ would make a new kind of free American citizen, would put calculation on a firm basis, would restore mathematics to its rightful (high) perch in the intellectual world; it would destroy education, it would make American education into a laughingstock. Full of hope and hyperbole, claims for the new Cold War textbooks could not have been more extreme. In this remarkable book, Phillips tracks this attempt at a national—even international—reform in how schoolchildren would learn math and so come to reason more generally. Rich in sources, precise in history, and ambitious in contextualizing the new math, this book adds powerfully to our understanding of twentieth-century science education, and to debates as to what it means to understand mathematics.”

“The New Math is ambitious, rich, and remarkably well-written. During the middle decades of the twentieth century, many groups struggled to articulate what ‘mathematics’ is, what ‘mathematicians’ actually do, and how a new approach to mathematics instruction could craft ideal citizens in America’s schools. Mathematics teaching became a symbolic arena to sort out competing notions of proper thinking in the nuclear age. Drawing upon an impressive range of sources, Phillips vividly charts the surprising plasticity of ‘mathematics’ among professional scholars and the voting public in Cold War America.”

David Kaiser, MIT | author of "How the Hippies Saved Physics: Science, Counterculture, and the Quantum Revival"

“In this history of the new math, Phillips reconstructs how techniques for teaching arithmetic, geometry, and algebra embedded at once professional views of the constitution of modern mathematics and social and political concerns of the Cold War era. Recovering debates that ranged from the grassroots to professional mathematicians and the National Science Foundation, this fascinating book demonstrates how both supporters and opponents of the new math believed that citizenship, democracy, and the social order depended not only on children learning mathematics, but how they learned it and how they thought about it.”