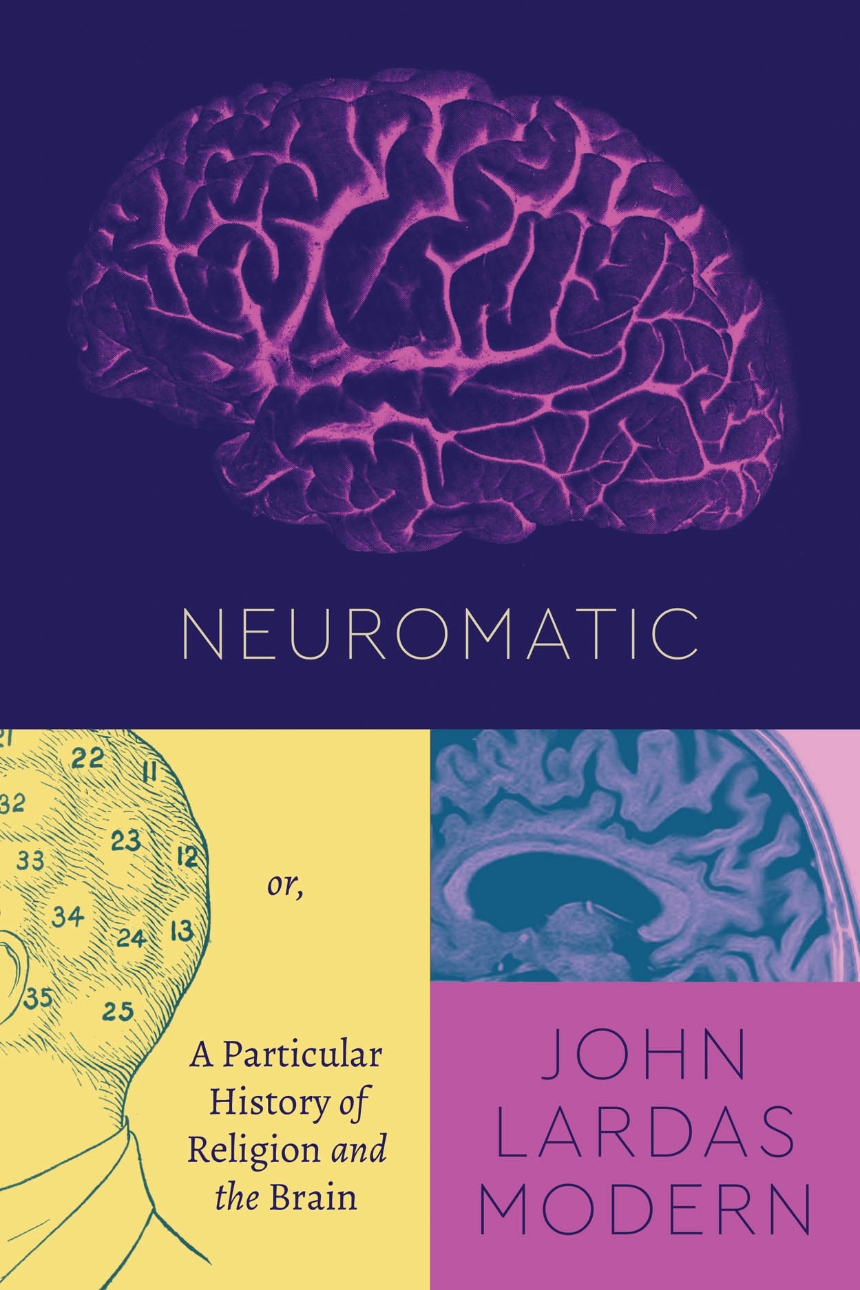 Or, A Particular History of Religion and the Brain

Or, A Particular History of Religion and the Brain

In Neuromatic, religious studies scholar John Lardas Modern offers a sprawling examination of the history of the cognitive revolution and current attempts to locate all that is human in the brain, including spirituality itself. Neuromatic is a wildly original take on the entangled histories of science and religion that lie behind our brain-laden present: from eighteenth-century revivals to the origins of neurology and mystic visions of mental piety in the nineteenth century; from cyberneticians, Scientologists, and parapsychologists in the twentieth century to contemporary claims to have discovered the neural correlates of religion.

What Modern reveals via this grand tour is that our ostensibly secular turn to the brain is bound up at every turn with the religion it discounts, ignores, or actively dismisses. In foregrounding the myths, ritual schemes, and cosmic concerns that have accompanied idealizations of neural networks and inquiries into their structure, Neuromatic takes the reader on a dazzling and disturbing ride through the history of our strange subservience to the brain.

"Neuromatic is a fascinating exploration of the intertwined histories of religion and the brain. More than anything, it raises the question of the nature of belief — whether we can know the unknowable through these shadows that we chase around the cave of the skull."

"A powerful intervention into how notions of the secular are proliferated and internalized. . . . An innovative and imaginative work that shows the inner workings of our commonsense understandings of ourselves and our world."

"This is a wild ride, engaging and rewarding."

"Modern balances the academic and the bizarre with a colorful cast of characters from history, from religious scholars to scientists to psychics. There’s something for anyone with a curious mind."

“This book is magisterial in scope—masterfully researched, carefully considered, subtly theorized, and energetically executed. Wrangling published, archival, and media sources into a deliberately nonlinear genealogy, Neuromatic will be essential for scholars of religion, history, philosophy, and science studies.”

“Neuromatic is equal parts brilliant critical analysis and affectionate polemic. I strongly recommend it to my colleagues in the cognitive sciences who should know about the metaphysical skeletons in our closets. I recommend it to everyone else because reading it is so much fun.”

“Neuromatic, though masquerading as both a poke at the smugness of supposedly secular science and a plea against reductionism, is up to something more interesting: anamnesis. It wants us to stop forgetting everything that went into making the brain the font of all order—pills, electro-shock therapy, EEGs, TV screens, cognitive anthropology and other findings from the twilight zone of cybernetics. With flashes of insight going off in an antic zigzag logic, Neuromatic fires on as many synapses as the “enchanted loom” of the brain itself. Modern, a library cormorant of the first order, provides a history of oddballs and kooks, including some heroes of postwar science, and I ended up not being able to tell them apart. I found my brain happily scrambled after reading this book. Neuromatic gleefully demonstrates how the effort to create binaries of pure-dirty, science-kookiness, truth-fabrication, sobriety-credulity, secular-religious fails again and again. An ultimately sane plea to linger in the midworld."

Prologue: Already Gone
Introduction
Saturation
Approaching the Neuromatic (with a Short Engineering Aside)
Blurred Lines
Cybernetics and the Question of Religion
Cybernetic Theses of Secularization
Poetics

Synaptic Gap: The Information of History

II. Neither Matter nor Spirit: Toward a Genealogy of Information
Hard Problems
Neuromatic Piety: An Overview
Ether and the Permeation of the Interspaces
Emanuel Swedenborg, Neuroscientist
Ghosts of Swedenborg
Mental Slavery and the Invention of Spirituality
The Diakka and Their Earthly Victims
The Mediomaniacal Origins of American Neurology
Prehistories of Electroencephalography
Brain Waves and Tremulating Information
Biofeedback and the Experience of Correspondence
The Ontology of Information
Concluding Thoughts on Perceptronium

Synaptic Gap: Too Much Too Soon

III. Imagining the Neuromatic
Crash and Burn
Opening Scene from a Cybernetic Demimonde
Elective Affinities
The Mechanics of Mediumship
Images of an Oracle
Thought Dictated in the Absence of All Control
Cut-Ups
From Voodoo Death to Virology
Engrams and Auditing
Past Lives of the Neuromatic Brain
Exteriorization
Break Through in Grey Room

IV. Histories of Electric Shock Therapy circa 1978
Of Systems, Sex, and Secular Conversion
Moral Treatment and Heads That Differ in Shape
Gendered Electricity in the Neuromatic Groove
The Operationalization of Napa State Insane Asylum
Patients’ Rights
The Shaving of Leonard Frank’s Beard
Electric Love Therapy
The Business of Marriage
The Union of All Contradictory Ideas
I Watch TV, I Watch TV
Live from Napa State