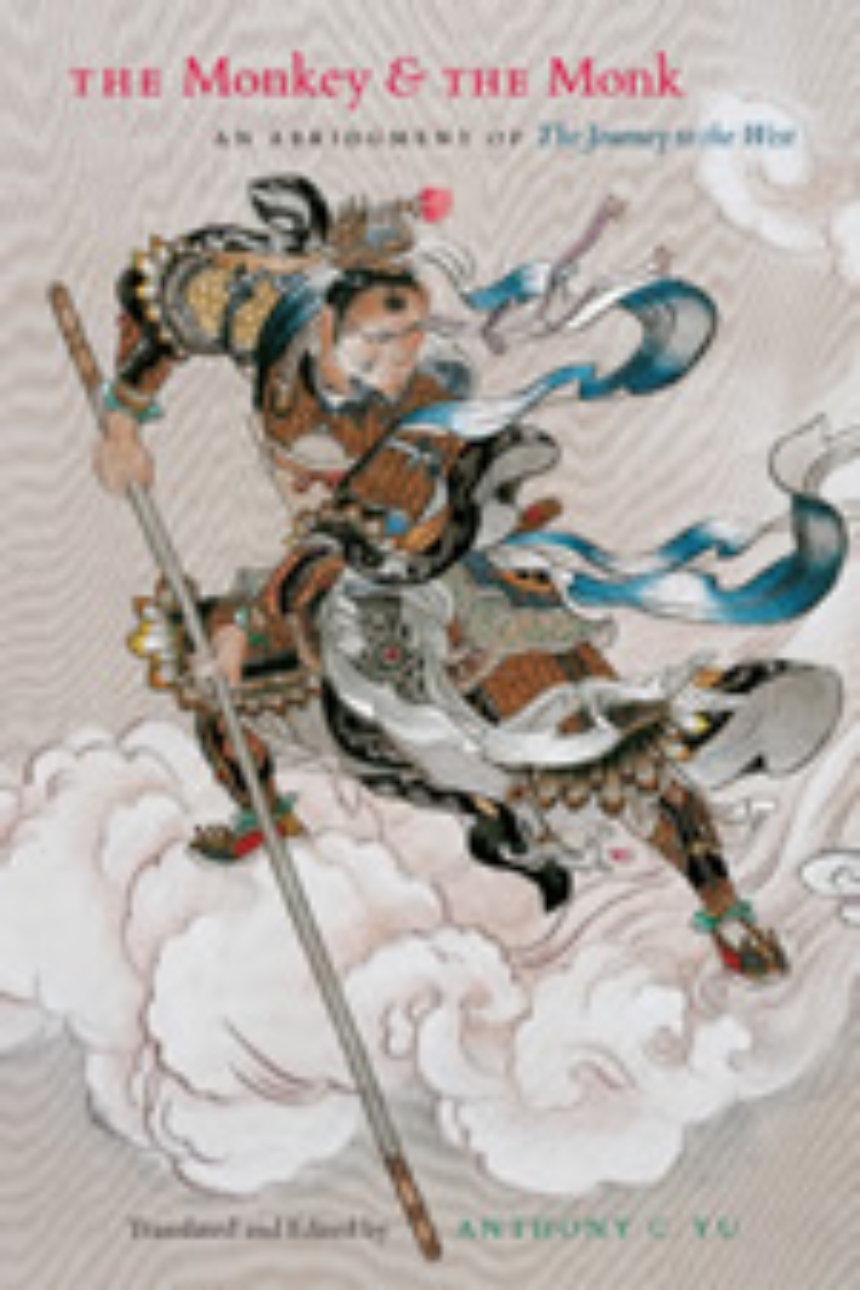 The Monkey and the Monk

An Abridgment of The Journey to the West

The Monkey and the Monk

An Abridgment of The Journey to the West

Anthony C. Yu’s celebrated translation of The Journey to the West reinvigorated one of Chinese literature’s most beloved classics for English-speaking audiences when it first appeared thirty years ago. Yu’s abridgment of his four-volume translation, The Monkey and the Monk, finally distills the epic novel’s most exciting and meaningful episodes without taking anything away from their true spirit.

These fantastic episodes recount the adventures of Xuanzang, a seventh-century monk who became one of China’s most illustrious religious heroes after traveling for sixteen years in search of Buddhist scriptures. Powerfully combining religious allegory with humor, fantasy, and satire, accounts of Xuanzang’s journey were passed down for a millennium before culminating in the sixteenth century with The Journey to the West. Now, readers of The Monkey and the Monk can experience the full force of his lengthy quest as he travels to India with four animal disciples, most significant among them a guardian-monkey known as “the Great Sage, Equal to Heaven.” Moreover, in its newly streamlined form, this acclaimed translation of a seminal work of world literature is sure to attract an entirely new following of students and fans.

“A new translation of a major literary text which totally supersedes the best existing version. . . . It establishes beyond contention the position of The Journey to the West in world literature, while at the same time throwing open wide the doors to interpretive study on the part of the English audience.”—Modern Language Notes, on the unabridged translation

“This is a deftly streamlined version of Anthony Yu’s complete translation of the famous Ming dynasty novel The Journey to the West. The Monkey and the Monk offers a generous selection of carefully chosen chapters, preserving the essential outlines of the story and including all of the main characters who are familiar to young and old alike in China: the monk, the monkey, the white horse, the pig, and the sand-spirit. Reading through this marvelous abridgment, one can experience the whole range of rapture and transformation occasioned by the pilgrimage to India in search of Buddhist scriptures undertaken by the Tang monk Xuanzang and his four faithful companions.”<Victor H. Mair, translator of Wandering on the Way and Tao Te Ching>

Victor H. Mair, translator of Wandering on the Way and Tao Te Ching

“A new translation of a major literary text which totally supersedes the best existing version. . . . It establishes beyond contention the position of The Journey to the West in world literature, while at the same time throwing open wide the doors to interpretive study on the part of the English audience.”<Modern Language Notes, on the unabridged translation>

“One of the greatest ventures of our time in humanistic translation and publication.” —New York Times Book Review, on the unabridged translation>

"The Journey to the West tells the story of monk Xuanzang’s 17-year journey from Tang China to India in the seventh century to secure Buddhist texts for translation. Anthony C. Yu, Professor Emeritus of Humanities at the University of Chicago, who produced a massive, wonderful four-volume translation of the work in the 1970s and 1980s, has now written a single-volume, concise version of the epic. Blending cosmology, scripture, adventure, rivers 800 miles wide, and travelogue, this elegant volume retains a mythic quality and is full of musical language and the pomp of classical Chinese literature." — R. K. Dickson, Bloomsbury Review

Preface
1. The divine root being conceived, the origin appears;
The moral nature cultivated, the Great Dao is born.
2. Having fully awakened to Bodhi’s wondrous truths,
Cut Mara, return to the root, and fuse the primal spirit.
3. The Four Seas and the Thousand Mountains all bow to submit;
From Ninefold Darkness ten species’ names are removed.
4. Appointed as a Bima, how could he be content?;
Named Equal to Heaven, he’s still unpacified.
5. Disrupting the Peach Festival, the Great Sage steals elixir;
With revolt in Heaven, many gods try to seize the fiend.
6. Guanyin, attending the banquet, inquires into the affair;
The Little Sage, exerting his power, subdues the Great Sage.
7. From the Eight Trigrams Brazier the Great Sage escapes;
Beneath the Five Phases Mountain, Mind Monkey is stilled.
8. Our Sovereign Buddha makes scriptures to impart ultimate bliss;
Guanyin receives the decree to go up to Chang’an.
9. Chen Guangrui, going to his post, meets disaster;
Monk River Float, avenging his parents, repays their kindness.
10. The Old Dragon King, in foolish schemes, transgresses Heaven’s decrees;
Prime Minister Wei sends a letter to an official of the dead.
11. Having toured the Underworld, Taizong returns to life;
Having presented melons and fruits, Liu Quan marries again.
12. The Tang emperor, firm in sincerity, convenes the Grand Mass;
Guanyin, revealing herself, converts Gold Cicada.
13. In the Den of Tigers, the Gold Star brings deliverance;
At Double-Fork Ridge, Boqin detains the monk.
14. Mind Monkey returns to the Right;
The Six Robbers vanish from sight.
15. At Serpent Coil Mountain, the gods give secret protection;
At Eagle Grief Stream, the Horse of the Will is reined.
16. At the Guanyin Hall the Tang monk escapes his ordeal;
At the Gao Village the Great Sage disposes of the monster.
17. At Cloudy Paths Cave, Wukong takes in Bajie;
At Pagoda Mountain, Tripitaka receives the Heart Sutra.
18. Bajie fights fiercely at the Flowing-Sand River;
Moksa by order receives Wujing’s submission.
19. Tripitaka does not forget his origin;
The Four Sages test the priestly mind.
20. The dharma-body in primary cycle meets the force of the cart;
The mind, righting monstrous deviates, crosses the spine-ridge pass.
21. At the Three Pure Ones Temple the Great Sage leaves his name;
At the Car Slow Kingdom the Monkey King reveals his power.
22. Heresy flaunts its strength to mock orthodoxy;
Mind Monkey shows his saintliness to slay the deviates.
23. The Chan Master, taking food, is demonically conceived;
Yellow Hag brings water to dissolve the perverse pregnancy.
24. Dharma-nature, going west, reaches the Women Nation;
Mind Monkey devises a plan to flee the fair sex.
25. Deviant form makes lustful play for Tripitaka Tang;
Upright nature safeguards the uncorrupted self.
26. The true Pilgrim lays bare his woes at Mount Potalaka;
The false Monkey King transcribes documents at Water-Curtain Cave.
27. Two Minds cause disturbance in the great cosmos;
It’s hard for one substance to reach Perfect Rest.
28. Priests are hard to destroy—that’s great awakening;
The Dharma-king perfects the right, his body’s naturalized.
29. Only when ape and horse are tamed will shells be cast;
With merit and work perfected, they see the Real.
30. Nine times nine ends the count and Mara’s all destroyed;
The work of three times three done, the Dao reverts to its root.
31. They return to the Land of the East;
The Five Sages attain immortality.