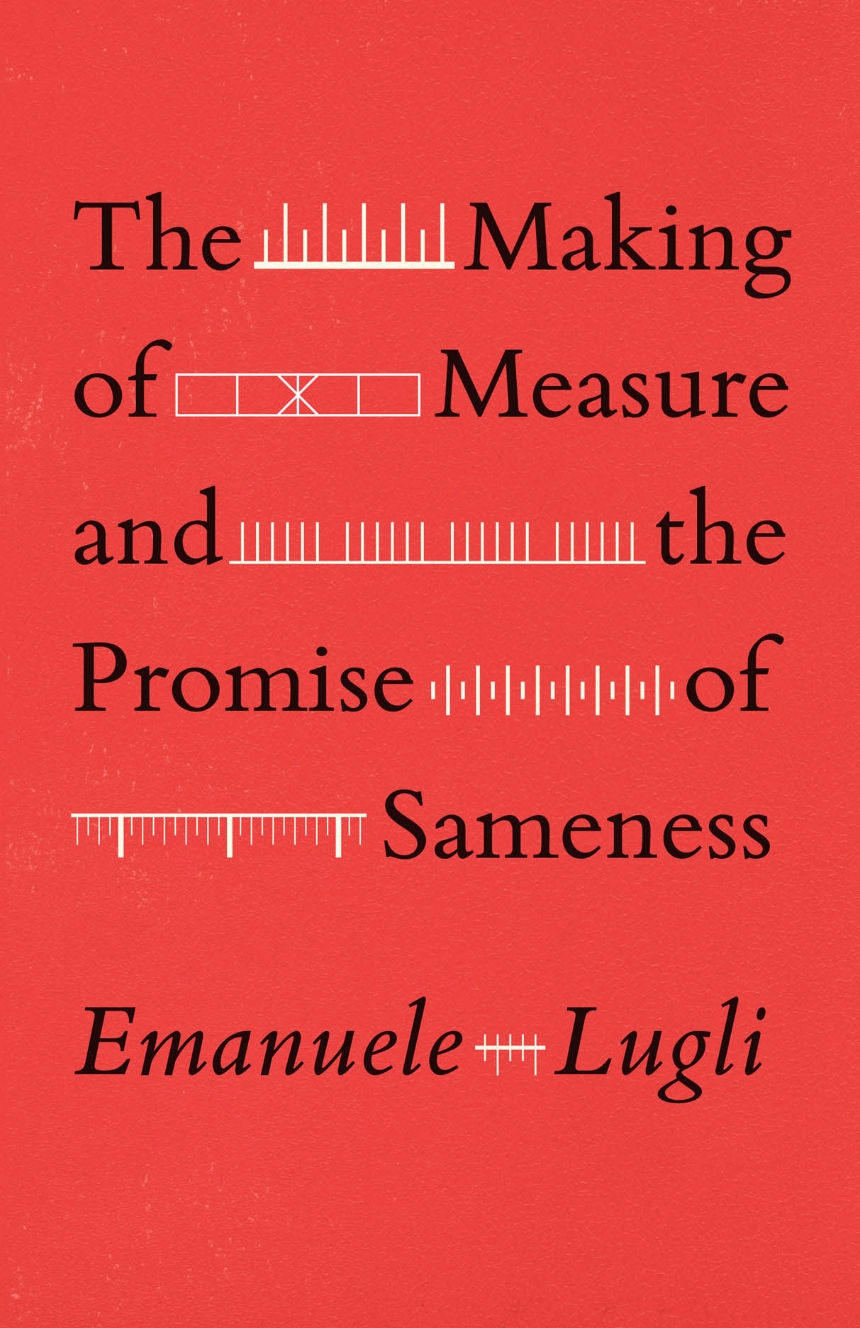 The Making of Measure and the Promise of Sameness

The Making of Measure and the Promise of Sameness

An interdisciplinary history of standardized measurements.

Measurement is all around us—from the circumference of a pizza to the square footage of an apartment, from the length of a newborn baby to the number of miles between neighboring towns. Whether inches or miles, centimeters or kilometers, measures of distance stand at the very foundation of everything we do, so much so that we take them for granted. Yet, this has not always been the case.

This book reaches back to medieval Italy to speak of a time when measurements were displayed in the open, showing how such a deceptively simple innovation triggered a chain of cultural transformations whose consequences are visible today on a global scale. Drawing from literary works and frescoes, architectural surveys, and legal compilations, Emanuele Lugli offers a history of material practices widely overlooked by historians. He argues that the public display of measurements in Italy’s newly formed city republics not only laid the foundation for now centuries-old practices of making, but also helped to legitimize local governments and shore up church power, buttressing fantasies of exactitude and certainty that linger to this day.

This ambitious, truly interdisciplinary book explains how measurements, rather than being mere descriptors of the real, themselves work as powerful molds of ideas, affecting our notions of what we consider similar, accurate, and truthful.

"Measurement no longer has the same invocatory power, but its reach is far greater. Market inspectors and public rituals of measurement have disappeared: in their place are international agencies that regulate everything from the purity of steel to the size of a pint. Lugli’s book doesn’t cover this world directly, but it describes some of the social and technical shifts that preceded it. Foremost among them is the creation of abstract units, all now defined by constants of nature."

"With its remarkable aggregation of captivating moments in the history of measurement, from the writings of the French philosopher Nicolas Malebranche to Johann Wolfgang von Goethe’s diary and pamphlet “Von Deutscher Baukunst” (“On German Architecture”), this book is bound to appeal to historians in a broad range of fields across the humanities. . . . [Lugli] delves into a rich array of understudied sources and introduces archival research as well as material evidence, such as the official standards of measure—medieval stone artifacts showing regional metrological systems that were displayed in nearly all Italian cities but have been overlooked by historians. . . . Lugli’s study will inspire future conversations about measurement, a topic that has been neglected by art historians for far too long."

“[The Making of Measure and the Promise of Sameness] is a remarkable achievement: written in short, pacey chapters, but underwritten by thorough scholarship (as the end-notes reveal), and full of surprising and entertaining insights into the stories and personalities – the particularities – of this complex history, this is a book that measurement has been waiting for. Lugli is an enthusiastic writer: one cannot help but to get caught up, as a reader, in his passion for the topic. At the same time, he is far from having been entranced by the moral and epistemic pretensions of measurement. Indeed, this is undoubtedly the history of an imaginative sceptic – someone deeply sensitive to the underlying, and inescapable, materialities and embodiment of a practice that often pretends to be independent of messy realities, as much of tools as social relations.”

"When institutions implement standards of measure, a discourse of stolidity and timeless-ness often buttresses their appeal to power. Emanuele Lugli interrogates these constructions, uncovering an array of supporting logics that shifted over time and emanated from different parts of European society over two millennia; despite their varied origins, each measured project built upon a common 'promise of sameness.' This book moves backward through time from the end of the early modern period to Roman antiquity, providing a heterogeneous history of measurement told through a vast range of materials, from buildings and fields, to frescoes and illuminated manuscripts, to relics and platinum bars. Lugli argues that measurement was not just an act of politics or economy but a useful field of thought with expressions in surprising places like religion and the formation of imagined communities...Lugli’s methodological diversity and bold style make the book engaging and inspirational in its parts. It is the kind of work that should have broad appeal among specialists and nonspecialists, and especially among contemporary communities grappling with how to measure truth."

"Emanuele Lugli shows readers the enforcement, negotiations, and politics that make the supposedly practical assessment of objects in space a centuries-long project of world building. . . . Lugli offers readers such immensely satisfying conceptual formulations as 'labelling various tools by the same word is the first gesture in creating an illusion of uniformity, which ultimately repeats errors.'"

"Lugli’s book proceeds as a series of short, punchy chapters beginning with the debates in Europe around 1800 over the establishment of the meter and then proceeding backward, plunging us into the various ways Europeans (mostly Italian communities in this account) grappled with the problem of how to go about measuring things and getting people to agree on and abide by methods of measuring, all the way back to the rise of medieval cities in the 12th century. I cannot remember the last time I read a book so unconfined by any known field, yet claiming the attention of so many. It contributes to the history of science and the history of ideas, to political and social history, and to the history of material culture, but it is not really any of these, while working at the foundations of all of them. Bristling with detailed history and punctuated by some startling discoveries in highly specialized areas, it is at the same time written with the express purpose of reaching a wide readership."

“This groundbreaking study shows that the public display of medieval standards of measure—artifacts and representations embodying historically local metrological units—‘triggered a series of revolutionary practices’ that ‘laid the foundations of today’s ideas about precision, reproducibility, and truth.’ Based on his deep and wide research, Emanuele Lugli leads us through the thickets of difference, diversity, and divergence—practices of measurement often widely varying from place to place—to the supposed purifications and abstractions that make modern measurement. Nonetheless, the possibility of slippage, uncertainty, and opacity always remains. His book transforms the way in which medieval and early modern topography, urbanism, depiction, architecture, and other practices can be seen; measure is not just a rationalized description of the world, but one of its primordial perceptual and material parameters.”

“Just as the International Prototype Kilogram in Paris is retiring, the long lacking history of measurements has finally been written. . . . Lugli uncovers this fascinating chapter of European and Mediterranean history, hidden under the ‘purported simplicity’ of meters and weights. He guides the reader backward in time from the standardizations of the eighteenth century to the world of medieval cities like Pisa or Milan—with their politics of measures, international trade, unexpected role of friars, and claims of control and authority—to the foot of the Lombard king Liutprand, the height of Christ, and the long-lasting impact of the Roman land surveyors. The book shows the connectivity between abstract and physical forms, the interrelations of things and ratios. It reads like a thrilling novel while at the same time following the highest academic standards.”

“In this incisive book, Lugli demonstrates how the field of social science about histories of measurements influenced and controlled European societies and dictated the shapes and forms of things. Lugli discloses new terrain, going beyond quantification to shed light on the interplay between the scientific method, social aspirations for equality and justice, and political power. Factually detailed, inspiring, and well informed by the latest theories on material culture and the sociology of science, this book is a brilliant study and makes for joyful reading.”

"The Making of Measure and the Promise of Sameness is a fascinating, persuasive, and beautiful book.  Using visual, architectural, and archival sources, Lugli lays out the millennial continuity of measuring practices and the political and material constructedness of the units of measurement that shaped the layout of medieval Italian towns and their environs.  Establishing the tight relations between systems of measurement and political authority, he undermines the fantasies of exactitude and certainty in systems of measurement, and he illustrates the phenomenon of metrical blur: nothing can be measured except in relationship to something else. Poised at the intersection of the histories of art, science, and medieval and Renaissance urbanism, Lugli’s book will engage readers across a wide range of fields."