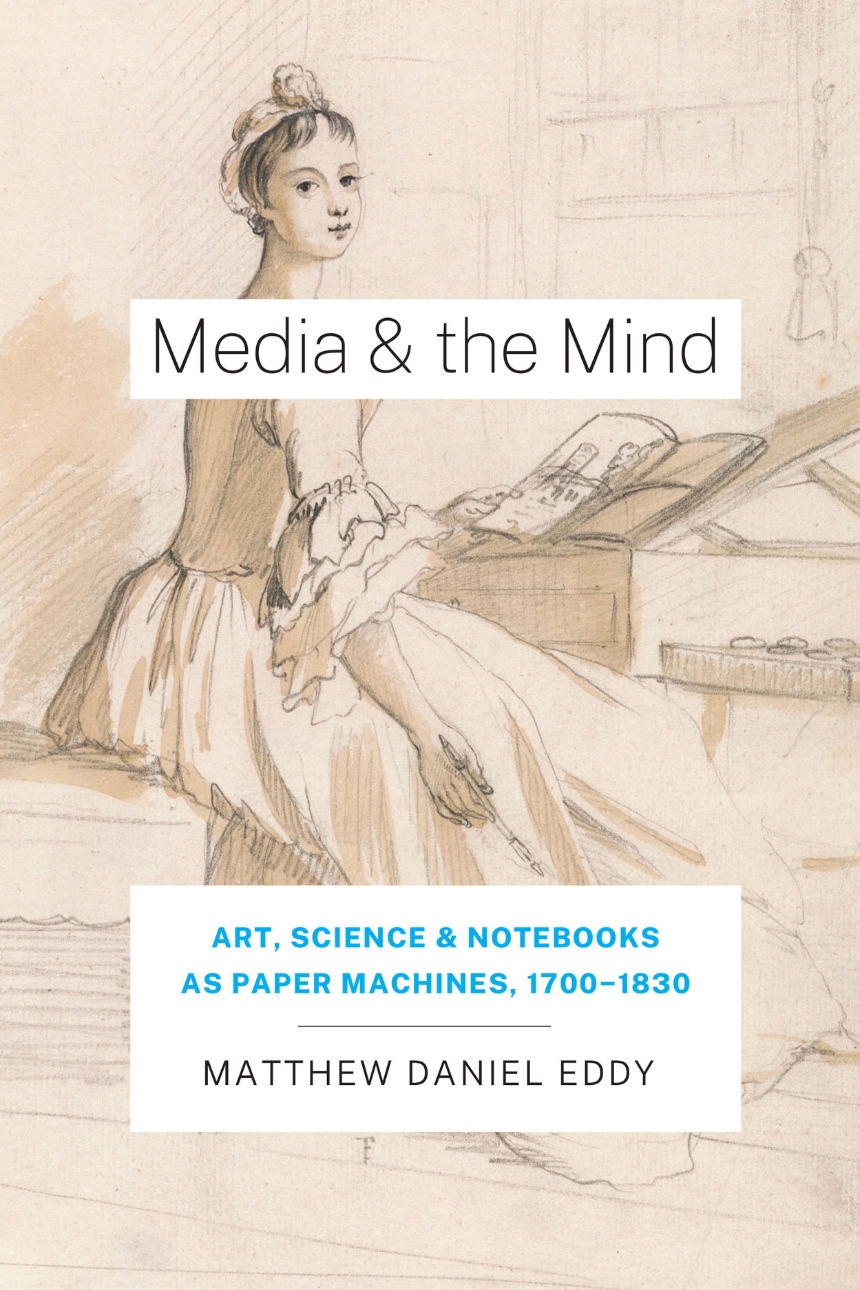 Media and the Mind

Media and the Mind

A beautifully illustrated argument that reveals notebooks as extraordinary paper machines that transformed knowledge on the page and in the mind.

Information is often characterized as facts that float effortlessly across time and space. But before the nineteenth century, information was seen as a process that included a set of skills enacted through media on a daily basis. How, why, and where were these mediated facts and skills learned? Concentrating on manuscripts created by students in Scotland between 1700 and 1830, Matthew Daniel Eddy argues that notebooks functioned as workshops where notekeepers learned to judge the accuracy, utility, and morality of the data they encountered. He shows that, in an age preoccupied with "enlightened" values, the skills and materials required to make and use notebooks were not simply aids to reason—they were part of reason itself.

Covering a rich selection of material and visual media ranging from hand-stitched bindings to watercolor paintings, the book problematizes John Locke's comparison of the mind to a blank piece of paper, the tabula rasa. Although one of the most recognizable metaphors of the British Enlightenment, scholars seldom consider why it was so successful for those who used it. Eddy makes a case for using the material culture of early modern manuscripts to expand the meaning of the metaphor in a way that offers a clearer understanding of the direct relationship that existed between thinking and notekeeping. Starting in the home, moving to schools, and then ending with universities, the book explores this argument by reconstructing the relationship between media and the mind from the bottom up.

“This is a major study of a neglected and important topic, and it will be of interest to an array of scholars in fields as diverse as book history, manuscript culture, history of education, history of childhood, Scottish Enlightenment philosophy, and the Enlightenment broadly understood. Its central argument, that the student notebook should be considered as an artifact in which a variety of knowledge management skills were learned and deployed by its maker, is convincing, novel, and insightful, and the depth and range of scholarship here is remarkable.”

“This intriguing, engaging, and wonderfully illustrated book examines the culture of notetaking in the schools and universities of Scotland in the long eighteenth century. This is a genuinely original and interdisciplinary project; with its focus on practice, it’s also a fresh and exciting one.”

“In an age in which artificial intelligence is all the rage, Eddy shows that human learning comes from a long tradition of reading and taking notes. Knowledge is not simply innate but the product of centuries of human practices of reading, notetaking, and interpreting everything from feelings to scientific data to shapes. This book makes one think that computers might need to learn how to doodle to creatively solve problems. Anyone wanting to understand the practices of complex learning and how humans manage data will need to read Eddy’s brilliant, meticulous, and authoritative history of notetaking.”

“This remarkable book turns the Enlightenment upside down. Based on pioneering research into hundreds of notebooks kept by eighteenth-century children and university students, Eddy brilliantly reveals how virtues of order, clarity, and accuracy were conveyed through practical processes of education. Thinking, he suggests, is a skill constructed over time, and the Age of Reason begins on the blank pages of paper notebooks.”

“This book will change fundamentally how we think about the Scottish Enlightenment. Drawing on a rich archive of notebooks, Eddy reveals a hidden world of experimentation and creativity in the learning process of eighteenth-century students. By refusing to take the fixed word on the page for granted, Eddy makes the familiar strange, showing us how embodied cognition operated with the help of paper machines and learning technologies. The famous image of the mind as a blank slate empowered students to experiment with the basic components of writing and thought. We will never think of Locke’s tabula rasa the same way again!”

Part I: Inside the Tabula Rasa
2. Writing
Writing as a Knowledge-Creating Tool
The Place of Writing within Literacy
Script and Observational Learning
Grids and Verbal Pictures
Copies and the Exercise of Memory
3. Codexing
Paper Machines as Material Artifacts
Paper as an Information Medium
Quires and Knowledge Management
Books and Customized Packaging
4. Annotating
Revisibilia Made through Annotation
Marginalia as Scribal Interface
Paratexts and Editorial Training
Ciphers and the Acquisition of Numeracy

Part II: Around the Tabula Rasa
5. Categorizing
Headings as Realtime Categories
Headings as Mnemonic Labels
Headings as Visual Cues
Headings as Coordinates for Scanpaths across Sightlines
6. Drawing
Description and Movement across a Page
Learning to Draw a Picture
Figures as Developmental Tools
Scenes as Observational Training
Observation and the Utility of Perception
7. Mapping
Mapkeepers and Knowledge Systems on Paper
Map-Mindedness and Embodied Experience
Desk Maps as Crafted Constructions
Draft Maps and Field-Mindedness
Field Maps and Visualized Data
Maps as Mnemonic Devices

Part III: Beyond the Tabula Rasa
8. Systemizing
The Syllabus as a System and a Machine
Lecture Notebooks and Knowledge Formation
The Syllabus and Its Organizational Technologies
Scroll Books and the Strategies of Realtime Thinking
Transcripts and the Extension of Memory
Lines and the Media of the Mind
9. Diagramming
Paths and Diagrammatic Knowledge
Schemata as Useful Mnemonic Aids
Shapes as Repurposed Perceptual Devices
Pictograms and Visual Judgment
Tables as Kinesthetic Diagrams
Traces and Realtime Observation
10. Circulating
Local and Global Networks
Personal and Institutional Libraries
Commodities within Knowledge Economies
Courts of Law and Public Opinion