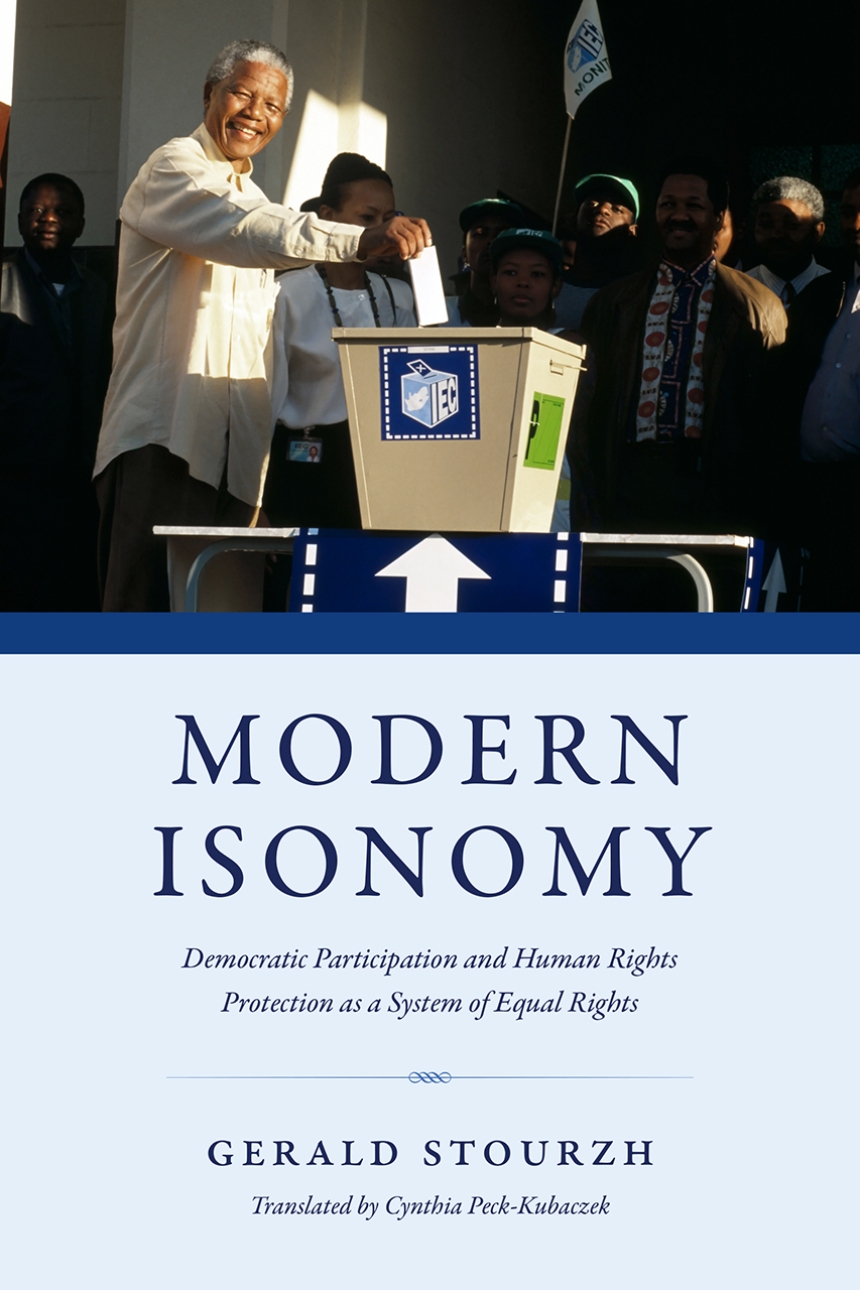 Translated by Cynthia Peck-Kubaczek
Until the eighteenth century, Western societies were hierarchical ones. Since then, they have transformed themselves into societies dominated by two features: participatory democracy and the protection of human rights. In Modern Isonomy, distinguished political theorist Gerald Stourzh unites these ideas as “isonomy.”

The ideal, Stourzh argues, is a state, and indeed a world, in which individual rights, including the right to participate in politics equally, are clearly defined and possessed by all. Stourzh begins with ancient Greek thought contrasting isonomy—which is associated with the rule of the many—with “gradated societies,” oligarchies, and monarchies. He then discusses the American experiment with the development of representative democracy as well as the French Revolution, which proclaimed that all people are born and remain free and with equal rights. But progress on the creation and protection of rights for all has been uneven. Stourzh discusses specifically the equalization of slaves, peasants, women, Jews, and indigenous people. He demonstrates how deeply intertwined the protection of equal rights is with the development of democracy and gives particular attention to the development of constitutional adjudication, notably the constitutional complaint of individuals. He also discusses the international protection human rights. Timely and thought-provoking, Modern Isonomy is an erudite exploration of political and human rights.

“Stourzh revives the half-forgotten word ‘isonomy’ as rival to ‘democracy’ from its start in Herodotus, its development through regimes with ‘gradations’ of hierarchy, and its modern flowering in ‘equalizations’ and ‘democracy with adjectives.’ In brief compass he supplies a wonderful variety of thoughtful descriptions from the many sources of his remarkable learning.”

“The eminent historian Gerald Stourzh has drawn on a lifetime of engagement in the development of law, constitutions, and citizens’ rights in Austria, the United States, and internationally to offer this learned essay on the concept of equality before the law, what the ancient Greeks were first to call isonomy. Writing with wisdom, directness, and strong conviction, Stourzh deftly traces the evolution of isonomy over the centuries and assesses its realization and vulnerabilities in the contemporary world.”

Preface
Introduction
1 Isonomy in Greek Antiquity
2 Gradations: Hierarchy in This World and the Other World
3 Equalizations: Ways toward Modern Isonomy in America and in France
4 Democracy with Adjectives
5 The Six Components of Modern Isonomy
General Legal Capacity: From Slavery to Freedom
Equality before the Law
The Liberation of Peasants
Tolerance and Equalization of Religious Groups
Jewish Emancipation and Renewed Deprivation of Rights
On the Equal Rights of Women
Indigenous Persons
Citizens and Foreigners
Positive Discrimination (Affirmative Action)
The Evolution of Fundamental Rights
The Protection of Fundamental Rights as Part of Constitutional Justice
The Internationalization of Fundamental Rights as Human Rights
Democracy
Conclusion: The Two Focal Points of Modern Isonomy
Bibliography
Index of Names