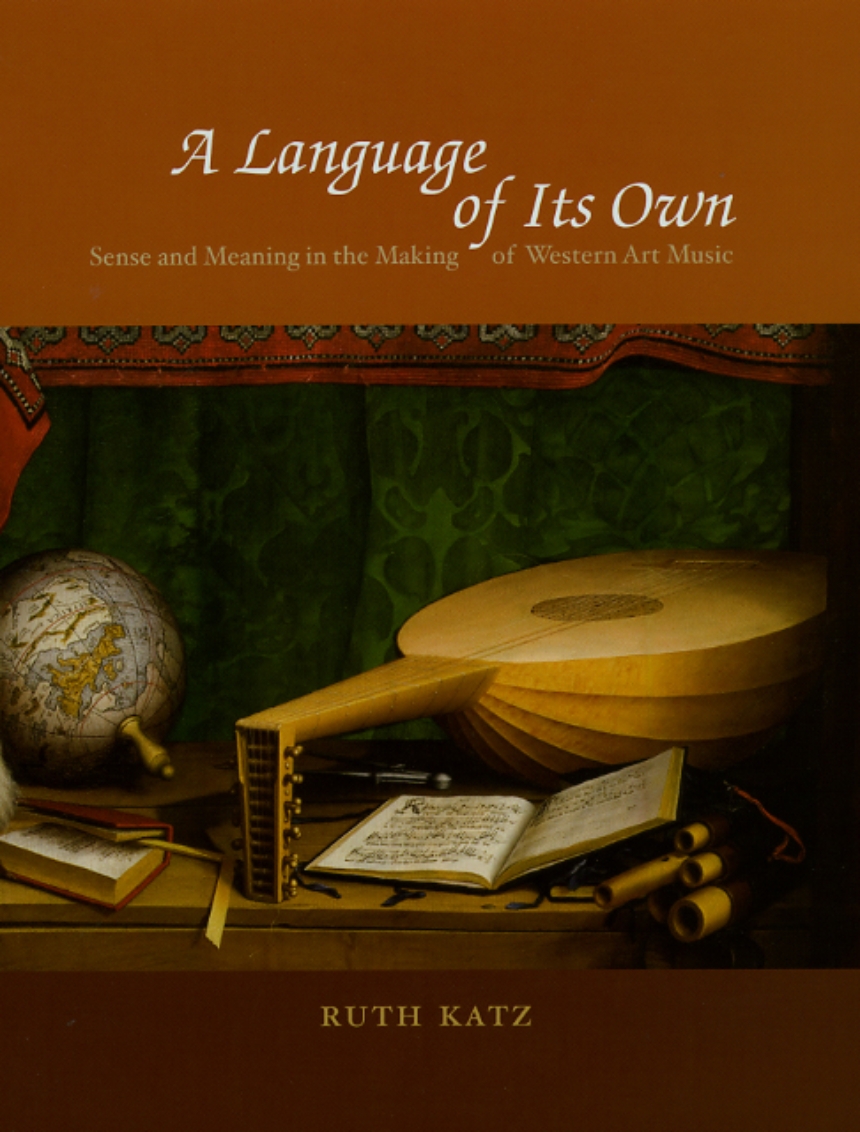 A Language of Its Own

Sense and Meaning in the Making of Western Art Music

A Language of Its Own

Sense and Meaning in the Making of Western Art Music

The Western musical tradition has produced not only music, but also countless writings about music that remain in continuous—and enormously influential—dialogue with their subject. With sweeping scope and philosophical depth, A Language of Its Own traces the past millennium of this ongoing exchange.

Ruth Katz argues that the indispensible relationship between intellectual production and musical creation gave rise to the Western conception of music. This evolving and sometimes conflicted process, in turn, shaped the art form itself. As ideas entered music from the contexts in which it existed, its internal language developed in tandem with shifts in intellectual and social history. Katz explores how this infrastructure allowed music to explain itself from within, creating a self-referential and rational foundation that has begun to erode in recent years.

A magisterial exploration of a frequently overlooked intersection of Western art and philosophy, A Language of Its Own restores music to its rightful place in the history of ideas.

“This book is the crowning achievement of a first-rate scholar, drawing on decades of intensive as well as extensive expertise. The perspective it offers on Western art music is not just exceptionally well informed but also thoroughly original. Scholars in generations to come will find it an invaluable document of how scholars working at the end of the Western canonic paradigm viewed that paradigm.”

“A Language of Its Own is not a long moan about the rise and fall of Western music. Ruth Katz is an elegant analyst, not a polemicist. And she is hopeful that our musical tradition can regain its footing, perhaps by recreating the ‘abstracting’ process that allowed Western music, despite its inability to describe what it does, to beguile and fascinate us for so long.”

“This is a history of Western art music ‘in its entirety,’ a process of historical development, in the old-fashioned Hegelian sense, that ‘culminated in what is generally known as “absolute music.”’ The result is a Fukuyamalike reading of the end of a musical history that was completed by the composition of the great nineteenth- and twentieth-century works.”

“Intertwining musicology with cultural and intellectual history, Ruth Katz produces an almost unnervingly brilliant philosophical history of sound. Following in the footsteps of Max Weber, Katz is able to draw upon semiotics—as Weber was not—to understand musical rationalization. Reconstructing Western music as a signifying system without concrete referent, A Language of Its Own inserts music analysis into contemporary debates about culture and social theory.”

PART I
The Structuring of a Self-Referential World

1 THE MAKING OF MUSICAL BUILDING BLOCKS
Preliminary Clarifications
The Development of Western Notation and Its Significance
Gregorian Chant Revisited
The Rise of Notation as an Autonomous System
Pitch
Duration
Concerning Notation: Concluding Remarks
Musical Frameworks as Referential Systems
The Greek Heritage: Music as an Organized Auditory Phenomenon
The Musical Heritage of the World That Gave Rise to Christianity
The Formal Organization of the Chant Repertoire
2 SYSTEMATIZING MUSICAL LAWS
The Self-Chosen Confi nes of Art
Horizontal and Vertical Elements: A Generating and Controlling Force, Respectively
Cementing the Relationships among Successively
Composed Voices
“The Function of Closure”
From Imperfect to Perfect Consonance—Relating Voices and Sonorities by Interval Progressions
Bestowing a Semblance of “Oneness” on Particles
External Designs
The Development of Inner Cohesion
The Rise of Harmonic Tonality
The Move from Desired Coincidences among Voices to a “System of Chords”
The Systematization of Harmonic Tonality
Shifting Concerns—From Musical “Rules” to Music’s Communicative “Powers”
PART II
The Crafting of a “Shared Understanding”

3 SEPARATING ‘SENSE’ FROM ‘MEANING’
Natural Languages: Some Relevant Points
The Power to Occasion an Atmosphere
Drama Aspiring toward the “Condition of Music”
The Legacy of the Humanists
Empirical Observation and Aesthetic Theory
Demystifying an Elusive Agenda
The Camerata: Custodian of a Paradigm
Leading Conceptual Turning Points
A Fundamental Change in the Conception of ArtSigns as Cognitive Tools
Moral Philosophy and Its “Affair” with ‘Beauty’
Modes of Communication and Cognitive Expansions
Social Interaction as a Regulating Force
The Sagacity of Sensate Discourse
Human Consciousness as a Creator of “Truths”
The Sign and the Signified in Western Music

4 PROBING THE LIMITS OF
MUSICAL COHERENCE
The Referential Function of Learned Schemata: External versus Internal References
Perception Replacing Conception
The Return of an Enigma
Music’s Spiritual Peculiarity as Distinct from Its Mundane Technical Aspects
The Changed Status of the Artist
The Merger of the Arts
Tantalizing the Ear and Luring the Mind
The Reformulation of Musical Structure
From General “Language” to Particularized “Speech”
A General Theory concerning the Function of
Symbol Systems in the Arts
The Flaunting of Identities: Individual and Collective
Intimacy Made Public
The Particularization of Publics
Music as a Cultural Subsystem
The Blend between Past and Future in Romantic Thought
Internal References Challenged
The Variable Functions of Theory
PART III
The Retreat from the “Shared Understanding”

5 A SHIFT IN THOUGHT AND THEORY
The Organic Nature of the Theoretical Presuppositions of Music in the West
The Romantic Era from a Bird’s-Eye View
The Relationship between the Composer and the Public Revisited
Aesthetic Autonomy—Art for Art’s Sake
‘Music’: From Closed System to Open Concept
Some Characteristics of the “Turn” of the Century
“Aristotelianism” in Musical Aesthetics
“Concerning the Musically Beautiful”
In Defense of Musicology as Envisioned
Diverging Trends in Fin-de-Siecle Music and Musical Analysis
Landmarks in a New “Tonal” Environment
Defying the “Soundness” of the Harmonic System
The Establishment of a Musical Canon
Atonal and Twelve-Tone Music
Developments That Affected Music’s External Semblance
Lending Saliency to the “Social Role of Art”
6 THE APPROPRIATION OF MUSICAL MEANING
The Rise of a Heteronomous Aesthetic
The General Distrust of Categorical Systems
Alternate Perspectives on the Relation between
‘Conception’ and ‘Perception’
The Relationship between Form and Formal Function
Reexamined
The Pliability of the Nonrepresentational
The Function of “Inclusive Symbols”
The Appropriation of Meaning
Evaluating Music: How and in What Way?
Concluding Remarks