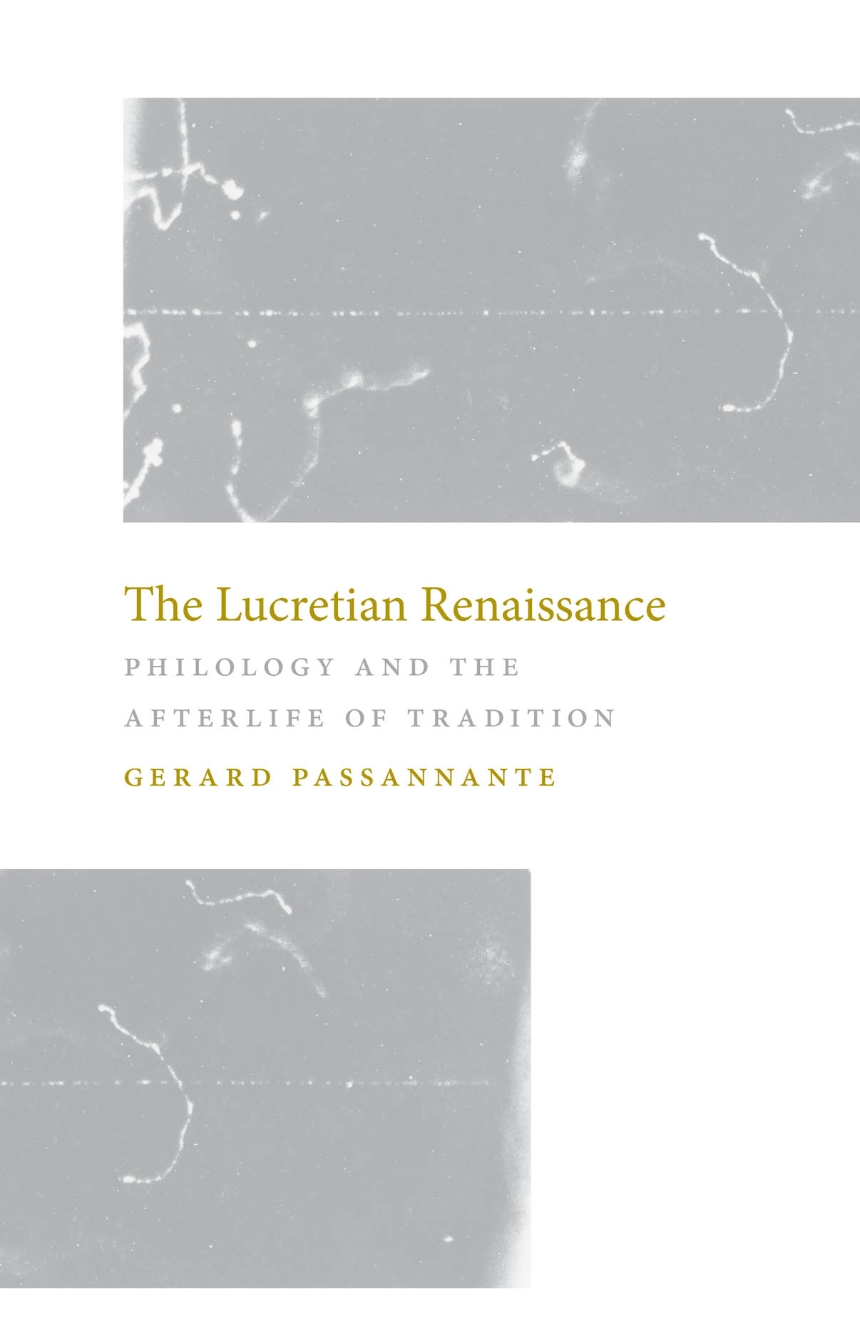 Philology and the Afterlife of Tradition

Philology and the Afterlife of Tradition

With The Lucretian Renaissance, Gerard Passannante offers a radical rethinking of a familiar narrative: the rise of materialism in early modern Europe. Passannante begins by taking up the ancient philosophical notion that the world is composed of two fundamental opposites: atoms, as the philosopher Epicurus theorized, intrinsically unchangeable and moving about the void; and the void itself, or nothingness. Passannante considers the fact that this strain of ancient Greek philosophy survived and was transmitted to the Renaissance primarily by means of a poem that had seemingly been lost—a poem insisting that the letters of the alphabet are like the atoms that make up the universe.
By tracing this elemental analogy through the fortunes of Lucretius’s On the Nature of Things, Passannante argues that, long before it took on its familiar shape during the Scientific Revolution, the philosophy of atoms and the void reemerged in the Renaissance as a story about reading and letters—a story that materialized in texts, in their physical recomposition, and in their scattering.
From the works of Virgil and Macrobius to those of Petrarch, Poliziano, Lambin, Montaigne, Bacon, Spenser, Gassendi, Henry More, and Newton, The Lucretian Renaissance recovers a forgotten history of materialism in humanist thought and scholarly practice and asks us to reconsider one of the most enduring questions of the period: what does it mean for a text, a poem, and philosophy to be “reborn”?

“Gerard Passannante’s erudite The Lucretian Renaissance: Philology and the Afterlife of Tradition charts a fascinating and deft path through the complex landscape of the transmission and appropriation of Lucretius’ De rerum natura in the Renaissance. Impressive in its scholarly learning and graceful in tracing the intellectual history of a text and a concept through thickets and forests of preexisting scholarship and commentary, Passannante’s The Lucretian Renaissance is a compelling reformulation of ‘influence’ and of philology. And it redefines and rewrites the literary history of materialism, richly fulfilling its effort to demonstrate that ‘a sustained literary engagement with materialism long preceded its late revival in the seventeenth century and was, in many ways, its very condition.’”

citation for the 2014 Harry Levin Prize

“[A] highly original study of the troubled reception and tremendous impact of a single classical poem on subsequent literary history and science in early modern and modern Europe.”

“With consummate élan, Passannante constructs an elegant exfoliative narrative characterized by comprehensive erudition and a complete command of the spectrum of scholarship relating to his purpose. Positing an analogy—derived directly from the poem itself—of Epicurean atomic particles to alphabetic letters, the author limns the formation and reformation of a text in flux, a text coextensive with the rise of Renaissance textual criticism, which exerted its pervasive influence on literary and intellectual history well into the 17th century. Highly recommended.”

“Passannante, ever alert to ironies and overturnings, brings things together that drive apart: his witty text offers a serio ludi that he calls the Lucretian Renaissance, but which might as easily be hailed as a renovated humanist philology.”

“Excellent, thoughtful, playful. . . . Passannante not only provides a complex and nuanced account of the effect of Lucretian reception on early modern writing and thought, but uses Lucretius’s atomism (including the clinamen) as a way of articulating the many early modern concerns and ambiguities surrounding classical inheritance.”

“A masterful and engaging look at the transmission of knowledge from author to author across time and space, orally and textually. Passannante’s examination of the frequency and management of such transmission is also relevant in an age of copyrighted material and intellectual property. This highly annotated work not only explores the transmission of Lucretius across the ages but also participates in the tradition, sinking its own ‘invisible hooks’ into the reader.”

“Lyric where [Greenblatt’s] The Swerve is narrative, The Lucretian Renaissance turns to seemingly isolated, exemplary scenes of reading: Petrarch reading Virgil and Macrobius, Montaigne reading Denis Lambin, Henry More reading Edmund Spenser. What links these figures (and many more) is that they were all ‘reading’ Lucretius, whether outwardly or in a subtle process that Passannante variously describes, drawing on a Lucretian vocabulary, as ‘contamination,’ ‘scattering,’ a ‘flitting’ and unseen influence. This expanded sense of reading and literary transmission is his key insight and what makes The Lucretian Renaissance not just a good book but an important one. . . . A work of scholarship that is excellent, even pathbreaking.”

“Superbly erudite. . . . Passannante’s method combines the history of the book with textual criticism, demonstrating that these techniques are by no means mutually exclusive, and definitively establishing his mastery of both. This is a significant and convincing work.”

“What did it mean for an ancient text to be ‘reborn’? In this elegant and learned study, Gerard Passannante reflects on the influence in the Renaissance of Lucretius’s great philosophical poem De rerum natura. That influence, Passannante demonstrates in a series of subtle readings that range from Petrarch to Henry More, was at once pervasive and fugitive. Lucretian thought, expressed in verse of exceptional power, was difficult to resist, but it challenged, subverted, and disturbed the age’s most cherished convictions. Passannante’s gift for threading his way through what he calls the ‘thick contexture of allusion’ makes him a wonderfully agile guide.”

“The Lucretian Renaissance is a learned, original, and moving exploration of the indirect ways in which poetry can change the world.”

“An excellent and beautifully written book, The Lucretian Renaissance narrates fiendishly tricky, obscure, and complex matter normally accessible only to the erudite—philologists, Renaissance scholars, and historians of the book—with the lightness of touch of a storyteller. Passannante does something of tremendous value and, moreover, something that is unavailable anywhere else: he demonstrates the hugely understated allure of Lucretius in Renaissance literature and well beyond.”

“Passannante’s book is a study of classical influence like no other, not only chronicling the unexpectedly broad and deep afterlife of De rerum natura in the early modern period but also revealing the complex influence of Lucretius on the very idea of influence. In the process, Passannante tells a compelling story about both the material and the immaterial nature of cultural tradition. In these pages, which demonstrate throughout philological skills that are both meticulous and imaginative, philology is itself historicized. It’s a book about an ancient author, about Renaissance reception, and about the history underlying our own acts of reading.”

“This splendid book is conceived upon a brilliant intuition, is constructed with formidable scholarship, and is written with lightness and panache. It draws its readers irresistibly into the millennial engagement of scholars, philosophers, and poets with Lucretius’s sublime and slippery text. Passannante’s keen eye for the revelatory anecdote and the astonishing detail brings to vivid life a host of unforgettable characters, from Petrarch to Montaigne, from Poliziano to Warburg, from Cicero to Freud—from Lucretius to us.”

“With The Lucretian Renaissance, Gerard Passannante offers a brilliant, original, and profoundly learned exploration of the ways—both explicit and subtle—in which the De rerum natura of Lucretius affected the scholarly, philological, and literary endeavors of the Renaissance. With forays backward into antiquity and forward into modernity, Passannante insists that Lucretius’s great work be read as poetry rather than versified philosophy; and he demonstrates how its key analogy between atoms and letters haunted —and continues to haunt—those readers most devoted to the transmission and preservation of history.”

“Passannante doesn’t limit himself to presenting a simple list of disparate authors influenced by Lucretius, but rather uses his central theme to offer us an extensive and well-documented consideration of the practices of reading, criticism, and philological research, providing a valuable overview complemented by copious footnotes. . . . In short, we find ourselves before an extremely novel approach that knows how to conjugate critical perspective and academic depth without sacrificing readability, something that, when paired with a subject that’s all the rage within the framework of renaissance literary studies, makes The Lucretian Renaissance an obligatory and immensely satisfying reference. Judging by the quality of his first book, this is an author to watch for anyone interested in the work of Lucretius and his influence, in the history of literature, or simply in the development of textual criticism and philology as living and constantly evolving disciplines.”

1. Extra Destinatum
2. The Philologist and the Epicurean
3. Homer Atomized
4. The Pervasive Influence
Epilogue
Acknowledgments
Bibliography
Index
Back to top