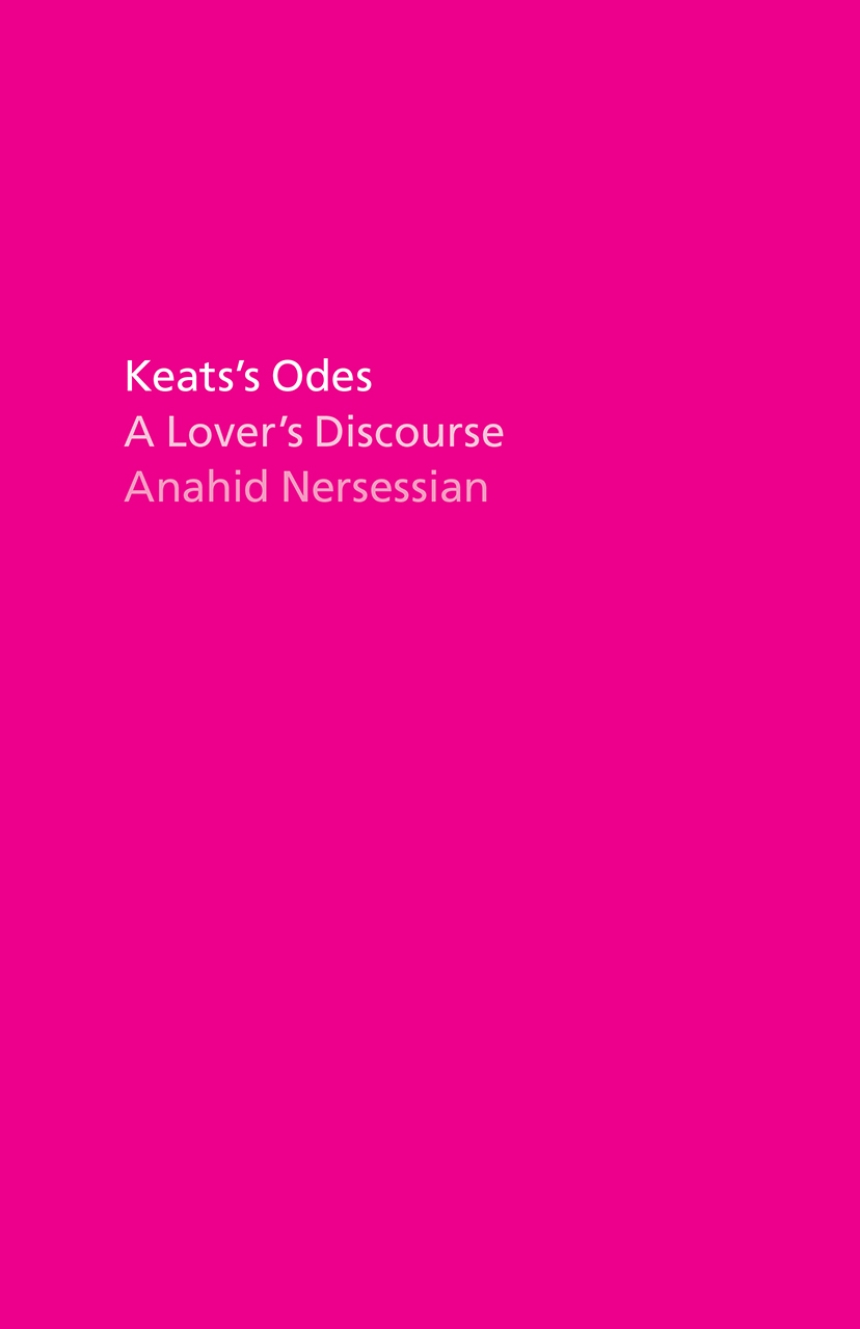 “When I say this book is a love story, I mean it is about things that cannot be gotten over—like this world, and some of the people in it.”

In 1819, the poet John Keats wrote six poems that would become known as the Great Odes. Some of them—“Ode to a Nightingale,” “To Autumn”—are among the most celebrated poems in the English language. Anahid Nersessian here collects and elucidates each of the odes and offers a meditative, personal essay in response to each, revealing why these poems still have so much to say to us, especially in a time of ongoing political crisis. Her Keats is an unflinching antagonist of modern life—of capitalism, of the British Empire, of the destruction of the planet—as well as a passionate idealist for whom every poem is a love poem.

The book emerges from Nersessian’s lifelong attachment to Keats’s poetry; but more, it “is a love story: between me and Keats, and not just Keats.”  Drawing on experiences from her own life, Nersessian celebrates Keats even as she grieves him and counts her own losses—and Nersessian, like Keats, has a passionate awareness of the reality of human suffering, but also a willingness to explore the possibility that the world, at least, could still be saved. Intimate and speculative, this brilliant mix of the poetic and the personal will find its home among the numerous fans of Keats’s enduring work.

“Keats’s Odes is brash, skeptical, and tender by turns, offering a fluctuating re-visioning of Keats which is firm in its convictions.  . . . Nersessian’s prose is bold, irreverent, declarative, and feral. Hyperbole and slackness are deceptive: every phrase feels carefully pitched.”

“Anahid Nersessian offers a radical and unforgettable reading of the British writer’s odes—one that upends our sense of his poetic project.”

"Intense emotion abounds in this literary blend of analysis and autobiography. . . . In six essays that examine each of Keats’s Great Odes, Nersessian tells a 'kind of love story' between herself and the poems."

"Nersessian’s knack for tapping into the emotional center of the odes comes from the third part of her book’s approach: including a personal narrative. She isn’t afraid of bringing her educated, loving, and damaged self (or at least the persona of one) into the discussion.”

"Two-hundred years after his death, Keats’ Great Odes are still among the most-praised poems in the English language. Nersessian taps her lifelong attachment to Keats to illuminate each of the pieces with a personal and meditative essay."

"This is a book written in the shadow of the lives, confrontations, and demands that Keats never got to make—a mid-Victorian Keats, say, Keats at a Chartist demonstration, or Keats at the barricades in Paris’s 1848 convulsions. But read it also as a model for what criticism looks like right now; it’s so state-of-the-art that its contemporaneity glows on every page. Urgent, brave, a little elusive at the same time that it is also confrontational, weaving autobiographical vulnerability with critical verve, like a series of letters addressed to an unknown reader who’ll be willing to follow every turn even as they resist, maybe, one or two. Nersessian has, among other things, a gift for lovely figuration. . . . I read it in one big excited gulp."

"The best book about John Keats published at the poet’s bicentenary."

“The book’s intimacy, vulnerability and determination to provoke is true to Keats, and Nersessian’s genuine feeling for his work is never in doubt. One can’t help but be pleased that two centuries on, Keats’s odes still inspire engagement and love.”

"Whoda thunk anyone had anything new to say about John Keats? Nersessian demolishes the kitschy gift-shop Keats, giving us in exchange a dangerous political poet whom you have to read Marx to fully grok. This never gets tendentious, because it is leavened with a personal narrative modeled on Barthes's Lover's Discourse."

"[Keats's Odes] appears freed by the sensuousness of Keats’s own verse, standing on the verge of becoming something more than literary criticism. While not an imitation of Keatsian style, Nersessian shares his willingness for vulnerability and for writing that enfleshes the experience of being subject to the world because you are a subject in it."

“Nersessian weaponizes her searing prose—and Keats’s verse—for a very personal and yet deeply political mission. This short book is highly conscious of the world’s evils, but makes a passionate case for humanity in the face of modern capitalism and the climate emergency. It is all the more powerful a reading of Keats because it rejects the simplistic contortionism that political readings often adopt.”

"Keats’s Odes: A Lover’s Discourse by Anahid Nersessian is a deep and accessible delve into the poetry of one of the great Romantic poets. It is the perfect antidote to the way most of us had his poetry foisted on us in school as it's a wonderful combination of reverence for Keats’ sublime writing and reality-based analysis."

"In previous books, Nersessian has shown herself an excellent scholar of Romanticism. With Keats’s Odes: A Lover’s Discourse, she proves that her criticism can have memoiristic range, too. . . . What most impresses about Keats’s Odes is how deftly Nersessian moves from Keats’s vulnerability to her own."

“This book claims to be ‘about’ Keats’s odes. And it is. But it is also about beauty and sadness and love and revolution and how the odes can help us to better understand these things. It is nothing short of a perfect book, one that understands how poetry can transform one’s life. Nersessian is on track to be the Harold Bloom of her generation, but a Bloom with politics.”

“In a tour-de-force series of revisionary readings, Nersessian makes Keats’s odes new in A Lover’s Discourse; and by the end of this exhilarating book, a new poet emerges into historical and psychological focus as well, neither aesthete nor insurgent, but someone who discovers the radicalism immanent in literary style. On yet another level, Keats’s Odes is a discourse on love as interpretive practice. Demanding, generous, precise, utopian, and unfailingly brilliant, Nersessian reinvents reading itself as a form of critical intimacy for our broken times. ‘If love is anything not laid waste by this world it is free,’ writes this reader. ‘Mine is.’”

1   Ode to a Nightingale

In the thick of a colossal heartbreak or else teetering on the lip of one, I went to see a witch. Someone had brandished forgiveness in front of me like baby Keats’s sword, and I wanted to know how to answer. The question, I could tell, bored her. Frankly it bored me, and we had bigger fish to fry. One of the first things she said was, “you spend a lot of time with dead
people.”
I had never thought of it that way, but she’s exactly right. I told her that, yes, I think about dead people all day. I read what they’ve written and try to understand what they’ve meant; then I stand in front of teenagers and offer up intimate details about their lives—their exercise routines and puerperal fevers, the children and ideals they tried to hold onto and those they cast aside. I explain how close they came to imagining communism, mostly as an excuse to drill into my students what communism is (“the land belongs to no one” and “the fruits belong
to all”—Sylvain Maréchal, 1796). If I’m being completely honest, I do feel sometimes that they are in the room with me, and I tell the witch that lately one of them has a presence that feels very angry, as if he has taken a side in the matter of the heartbreak, and it is not mine. The witch is skeptical. “I don’t know what to tell you about that,” she says, “but you need to be more careful with spirits.”
Keats, too, spent a lot of time with dead people, as a medical student dissecting cadavers and, like me, in his head. He had a feeling he was being watched—by
Shakespeare. To Haydon he copped to having “notions of a good Genius presiding over” him, then asked, with his usual blend of diffidence and bravado, “Is it too Daring to Fancy Shakespeare this Presider?” If I’ve had similar notions of Keats, I have no idea why he might preside over me. I’ve never had literary ambitions. In college the only people who called themselves poets were wealthy, freckled New Englanders who dressed as puns for Halloween. I threw in my lot with the art majors, soft-spoken lefties, and kids in bands, was stoned all day and spent weekend mornings in a friend’s attic room, where we tried to wrap our heads around Althusser and Fanon. There was a group of us who identified, though we’d never say so out loud, as critics: people who know what words mean. To this day I don’t like being called a writer, even in the indirect context of a compliment like “You’re a good writer.” I don’t like the compliment either; in grad school I learned that good writer was a synonym for con artist.
If Keats is presiding over me, I guess he has his reasons; he’s been doing it for a long time. One day, when I must have been around eleven, I pulled a book called Love’s Aspects down from my parents’ shelf. Edited by Jean Garrigue, it promised to be a collection of the world’s great love poems, but inside were also Keats’s letters to Brawne—not poems at all but, in their naked sense of direction, irreducibly epistolary documents. Once I learned what happened to these two young people, I felt personally cheated by the tragedy. I wanted more of them both, including or maybe especially Brawne, whose voice is almost absent from the historical record. I promptly read all the Keats I could, including the great mid-century biographies—by Aileen Ward, Robert Gittings, Bate—and from here it was an easy glide to Shelley, Byron, Coleridge, even Wordsworth, the awful man who had insulted Keats at a dinner party by calling Endymion “a very pretty piece of Paganism.”
It’s hard to overstate what a lifeline this literature, which I didn’t yet know to call the Western canon, was for me, or how unambivalent about it I was. My father was born and raised in Tehran, and my mother, whose family is Welsh, in a depressed former mining town that used to be called Lake City, Tennessee, site of the Coal Creek War and a stone’s throw from the Fraterville Mine Disaster. Eastern Armenian, with its chic cargo of loan words from Farsi and French, was the first language I spoke and the whole of my identity—with a name as conspicuous as mine, I didn’t have much choice—but in the 1980s and ’90s, spun on a loop of hostage crises, arms deals, burning flags and burning oil fields, commercial airplanes shot out of the sky, it was the Iranian bit that caused the most trouble.
Like many kids who don’t look like their classmates, who cart around odd names and are told, loudly and sternly, by the teacher that when they choose construction paper on which to draw a self-portrait they had better not choose white, since anyone can see their skin is much darker than that, I figured out early that WASPs couldn’t be trusted with their own culture. I aligned myself with the literary past not to be like them but as a higher order of civilization, a bulwark against the barbarian hordes of saddle-shoe blondes who didn’t know the difference between Iran and Iraq but took the Gulf War as their latest provocation to kick me literally in the teeth. Besides, being “good at it” was praised and rewarded. When I got in trouble, which was often, it was the English teachers who had my back.