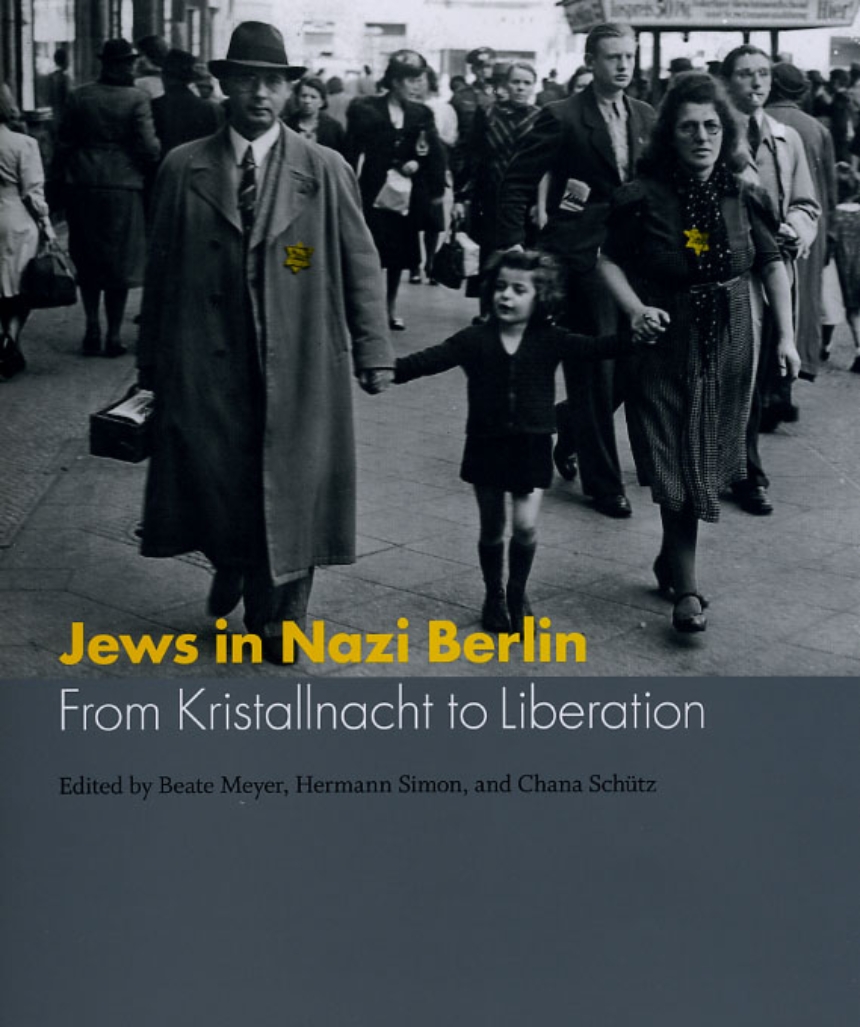 From Kristallnacht to Liberation

From Kristallnacht to Liberation

Though many of the details of Jewish life under Hitler are familiar, historical accounts rarely afford us a real sense of what it was like for Jews and their families to live in the shadow of Nazi Germany’s oppressive racial laws and growing violence. With Jews in Nazi Berlin, those individual lives—and the constant struggle they required—come fully into focus, and the result is an unprecedented and deeply moving portrait of a people.

Drawing on a remarkably rich archive that includes photographs, objects, official documents, and personal papers, the editors of Jews in Nazi Berlin have assembled a multifaceted picture of Jewish daily life in the Nazi capital during the height of the regime’s power. The book’s essays and images are divided into thematic sections, each representing a different aspect of the experience of Jews in Berlin, covering such topics as emigration, the yellow star, Zionism, deportation, betrayal, survival, and more. To supplement—and, importantly, to humanize—the comprehensive documentary evidence, the editors draw on an extensive series of interviews with survivors of the Nazi persecution, who present gripping first-person accounts of the innovation, subterfuge, resilience, and luck required to negotiate the increasing brutality of the regime.

A stunning reconstruction of a storied community as it faced destruction, Jews in Nazi Berlin renders that loss with a startling immediacy that will make it an essential part of our continuing attempts to understand World War II and the Holocaust.

“This unique and comprehensive collection of essays, available now in English, considers the Nazi destruction of Jewish life in Berlin between 1938 and 1945. Each facet in that process of destruction is described in meticulous detail, mainly by the victims themselves, and effectively conveyed by the volume’s contributing authors in concise essays. The authors rely on an extraordinarily rich historiography on the general subject of Jewish life in Nazi Germany, as well as on valuable archival sources of the Berlin Jewish community and its institutions, records that survived World War II and the turbulent postwar era in Germany. There is nothing comparable in English that so thoroughly dissects the tragic consequences of the Nazi destruction of a Jewish community that had originally constituted about one-third of the entire Jewish population in pre-Nazi Germany.”--Francis R. Nicosia, University of Vermont

“Beate Meyer, Hermann Simon, and Chana Schütz have envisioned and edited a remarkable book. Jews in Nazi Berlin, 1933–1945 explores Jewish life in that city during that era—while at the same time depicting patterns that held elsewhere. The editors’ deft touch reflects their keen historical imagination and utterly human approach. Focusing on individuals and families, the essays tell a multi-faceted story of both ruin and resourcefulness. Richly illustrated and ably translated, Jews in Nazi Berlin is a treasure: the book about Jewish life at the very heart of the Nazi kingdom to read and to assign to classes.”

“The authors succeed in bridging the gap between the broad issues, such as the process of illegal immigration or hiding, and the experience of individuals. The volume is, therefore, extremely useful for both teachers and students.”

“A lavishly illustrated book of essays. . . . [A] fine and comprehensive volume.”--Canadian Jewish News

"The book’s team of editors, historians, and researchers succeeded with a great number of photographs to restore some features of wartime Berlin and its Jewish community in a frank and direct manner, adding another important volume to our growing Holocaust library."

"An amazing volume of facts and personal accounts. . . . Accompanying these accounts of destruction is a stunning collection of photos and documents."