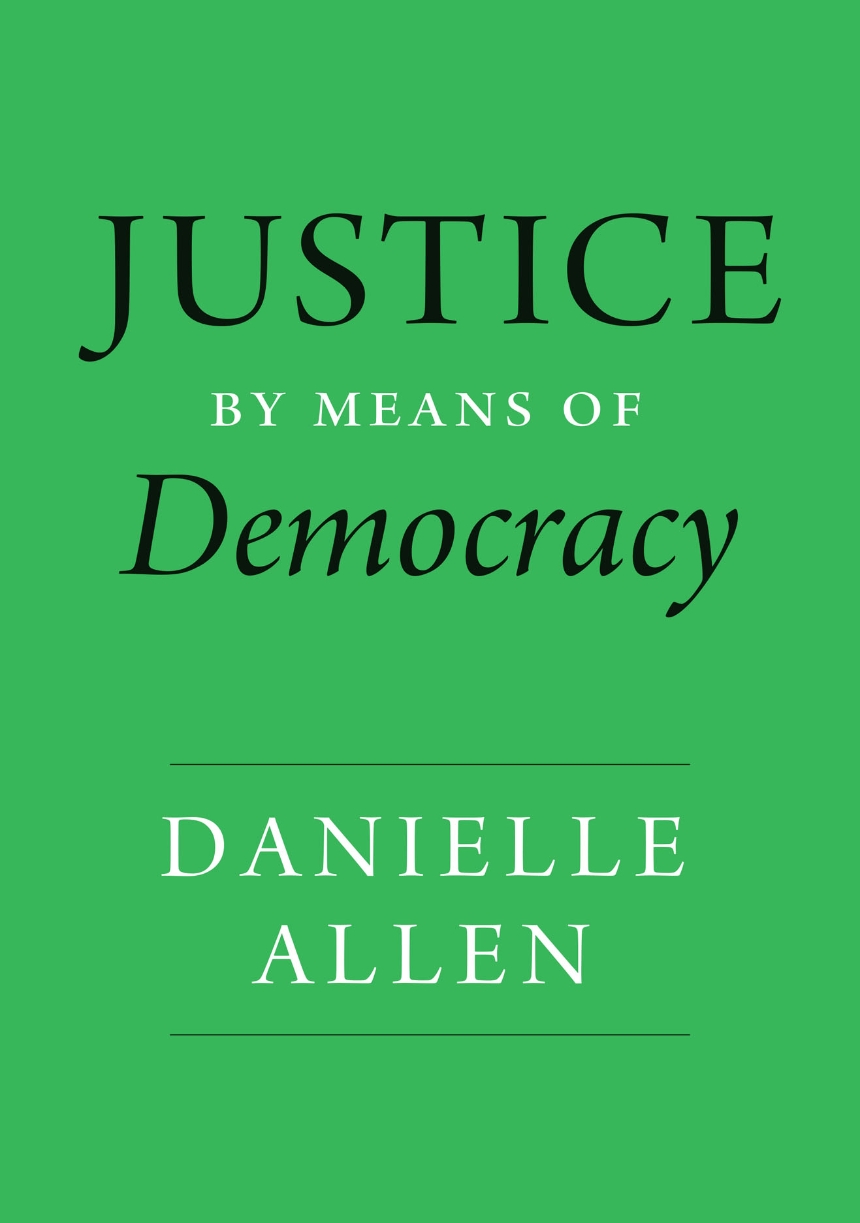 Justice by Means of Democracy

Justice by Means of Democracy

At a time of great social and political turmoil, when the line between what is right and what is expedient grows ever blurrier, and where power seems more and more to rest with the wealthy few, this book reconsiders the very foundations of democracy and justice. Scholar and writer Danielle Allen argues that the surest path to justice is the protection of political equality; that justice is best achieved by means of democracy; and that the social ideals and organizational design principles that flow from recognizing political equality and democracy as fundamental to human well-being provide an alternative framework not only for justice but also for political economy. Allen identifies this paradigm-changing new framework as “power-sharing liberalism.”

Liberalism more broadly is the philosophical commitment to a government grounded in rights that both protect people in their private lives and empower them to help govern public life. Power-sharing liberalism offers an innovative reconstruction of liberalism based on the principle of full inclusion and non-domination—in other words, non-monopoly—in politics, economy, and society. By showing how we all might fully share power and responsibility across all three sectors, Allen advances a culture of civic engagement and empowerment, revealing the universal benefits of an effective government in which all participate on equal terms.

Part I: A Theory of Justice Revised
Prologue. On Surprise and the Purpose of Political Philosophy
Chapter 1. Justice That Sacrifices Democracy: An Error
Chapter 2. Justice by Means of Democracy: An Ideal and Its Design Principles

The Great Recession of 2008; Thomas Piketty’s Capital in the Twenty First Century; earthshaking elections in the past eight years in the US and Britain, in South America, and across Europe; a global pandemic; and the Russian invasion of Ukraine have put questions of political economy, social stability, governance, and their entanglement on the map for everyone, not just economists. Prior to the arrival of the COVID-19 pandemic, many wondered whether the political surprises of recent years flowed from the dramatic increases in income and wealth inequality in developed countries, and from the suddenly diverging fates of those with and without university education. Many were the calls to revisit our approach to political economy. With the pandemic, in developed democracies like the US and the UK, we also witnessed profound failures of governance, coupled with economic ruin for many, even as the well-off sailed along relatively untouched. The need for a reinvented political economy has become only more pressing. Yet reinventing political economy actually requires stepping outside the domain of economics. Economists have, I think, been answering the questions set for them by political philosophers. If we wish for different answers, we have to devise different questions.

The purpose of this book is to propose some fresh questions—in particular, questions about political equality. The road to proposing fresh questions for economists lies through a reconsideration of the basic foundations of justice. I will propose in this book that the surest path to justice is the protection of political equality; that justice is therefore best, and perhaps only, achieved by means of egalitarian participatory constitutional democracy; and that the social ideals and organizational design principles that flow from a recognition of the fundamental importance to human well-being of political equality and democracy provide an alternative framework within which economists might do their work.
(...)
What is the relationship between political economy, political philosophy, and a theory of justice? As economic theorists from Adam Smith to Karl Marx to John Maynard Keynes to Friedrich Hayek have recognized, any given economic system is built out of a set of underlying rules for human interaction. For Smith and Hayek, the rules that undergird a healthy market economy were the products of long processes of social evolution generating a conventional morality anchored in practices like honesty, promise-keeping, property, and contract. For Marx, the relevant rules were designed by those with power in order to preserve their power and support their capacity to extract value from others. All recognized that the rules of the game structuring human interaction and those generating particular forms of economy embodied distinctive sets of social ideals and could be redesigned. Hayek expected improvement could be achieved at the margins through modest and restrained forms of experimentalism; he believed that innovations could be made to stick through processes of human imitation and adaptation. Marx thought the rules could be comprehensively reorganized and made to stick from the top down. Hayek recognized the power in self-organizing systems; Marx recognized operations of power in the institutions of human governance and believed they could be redirected in a wholesale fashion.

More modestly, the American founders—authors of the Declaration of Independence, the Constitution, and the Federalist Papers— also saw the power and value in intentionally designed institutions of human governance. Their goal was a set of institutions that recognized the natural dynamics of human interaction—both of competition and of cooperation—and worked to guide those dynamics in directions supportive of the “safety and happiness of the people” and its “general welfare.” Both self-organizing evolution and intentional governance can bring benefit to human society; both can also bring ill effects.

A theory of justice does not seek to describe the rules that have come to be in human society—whether as a result of the emergence of self-organizing systems of human cooperation or as a result of intentional efforts to organize human governance. Instead, a theory of justice seeks to identify the parameters for determining which among possible sets of rules for human interaction yields the best prospects for human flourishing, at both an individual and a species level. These parameters would then be relevant to political economy in setting directions for and bounds to our experimentalism, as we seek to identify which economic policies count as redesigns that improve, rather than worsen, human prospects.

Readers will initially be skeptical that an ideal of political equality can enrich our understanding of justice generally or help us renovate political economy. In our contemporary world, invocations of political equality most immediately call to mind topical challenges such as voting rights, campaign finance reform, and felon re-enfranchisement in the US; or the issues of party functioning and membership within nations and democratic deficits in the operations of the European Union in Europe. A few years ago, if you had asked someone what political equality was mainly about, I think those are the sorts of issues they would have offered in reply. The topics are precise and technical. Yet that was before we were all so seriously surprised by events—the election of Donald Trump and the Brexit vote, for example; the upending of German politics by the migration crisis; the governance crises emerging in the US with the pandemic and in Europe with the Russian attack on Ukraine. At stake in understanding political equality are deeper issues of the strength and health of human societies and their ability to advance the general welfare by building collaborative institutions and practices that deliver safety and happiness to all.