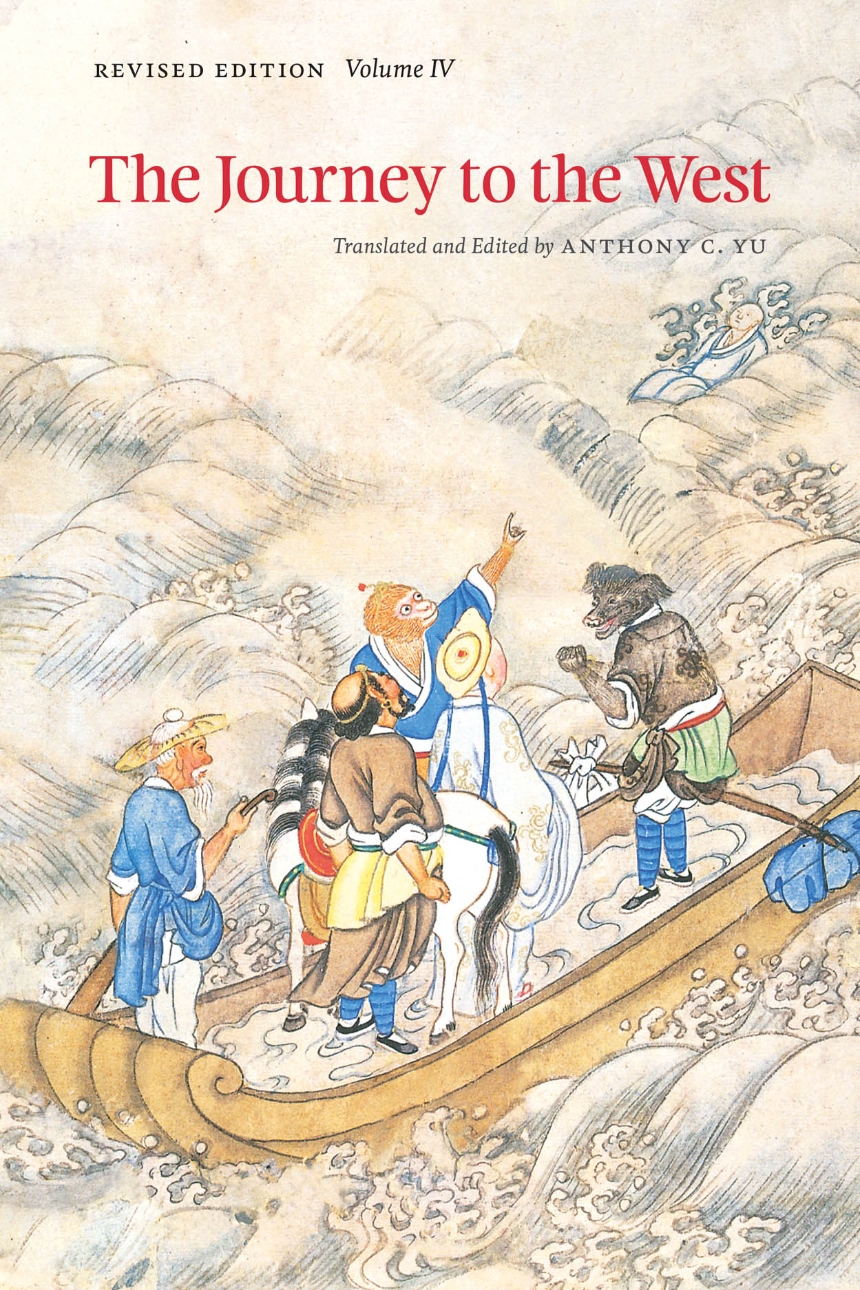 The Journey to the West, Revised Edition, Volume 4

The Journey to the West, Revised Edition, Volume 4

Anthony C. Yu’s translation of The Journey to the West,initially published in 1983, introduced English-speaking audiences to the classic Chinese novel in its entirety for the first time. Written in the sixteenth century, The Journey to the West tells the story of the fourteen-year pilgrimage of the monk Xuanzang, one of China’s most famous religious heroes, and his three supernatural disciples, in search of Buddhist scriptures. Throughout his journey, Xuanzang fights demons who wish to eat him, communes with spirits, and traverses a land riddled with a multitude of obstacles, both real and fantastical. An adventure rich with danger and excitement, this seminal work of the Chinese literary canonis by turns allegory, satire, and fantasy.

With over a hundred chapters written in both prose and poetry, The Journey to the West has always been a complicated and difficult text to render in English while preserving the lyricism of its language and the content of its plot. But Yu has successfully taken on the task, and in this new edition he has made his translations even more accurate and accessible. The explanatory notes are updated and augmented, and Yu has added new material to his introduction, based on his original research as well as on the newest literary criticism and scholarship on Chinese religious traditions. He has also modernized the transliterations included in each volume, using the now-standard Hanyu Pinyin romanization system. Perhaps most important, Yu has made changes to the translation itself in order to make it as precise as possible.

Abbreviations
76 Mind-Spirit dwells at home, and demons revert to nature;
Wood Mother together subdues the fiend’s true self.
77 A horde of demons affront native Nature;
The One Body bows to True Suchness.
78 At Bhikṣu he pities the infants and summons the night gods;
In the golden hall he knows the demon speaking on the way and virtue.
79 Searching the cave for the fiend he meets Long Life;
The proper lord of the court sees the babies.
80 The fair girl, nursing the yang, seeks a mate;
Mind Monkey, guarding his master, knows a monster.
81 At Sea-Pacifying Monastery Mind Monkey knows the fiend;
In the black pine forest three pupils search for their master.
82 The fair girl seeks the yang;
Primal spirit guards the Way.
83 Mind Monkey knows the elixir source;
Fair girl returns to her true nature.
84 “Priests are hard to destroy” completes great awakening;
The Dharma- king attains the right, his body’s naturalized.
85 Mind Monkey envies Wood Mother;
The demon lord plots to devour Chan.
86 Wood Mother, lending power, conquers the fiendish creature;
Metal Squire, using his magic, extirpates the deviates.
87 The Phoenix-Immortal Prefecture offends Heaven and suffers drought;
The Great Sage Sun advocates virtue and provides rain.
88 Reaching Jade-Flower, Chan convenes an assembly;
Mind Monkey, Wood, and Earth instruct disciples.
89 The yellow lion- spirit in vain gives the Muckrake Feast;
Gold, Wood, and Earth disturb with a scheme Mount Leopard’s-Head.
90 Masters and lions, teachers and pupils, all return to the One;
Thieves and the Dao, snares and Buddhism, quiet Ninefold-Numina.
91 At Gold-Level Prefecture they watch lanterns on the fifteenth night;
In Mysterious Flower Cave the Tang Monk makes a deposition.
92 Three priests fight fiercely at Green Dragon Mountain;
Four Stars help to capture rhinoceros fiends.
93 At Jetavana Park he asks the aged about the cause;
At the Kingdom of India he sees the king and meets his mate.
94 Four priests are feted at the royal garden;
One fiend vainly longs for sensual joys.
95 Falsely assuming true form, the jade hare’s caught;
True Yin returns to the right to join Numinous Source.
96 Squire Kou gladly receives a noble priest;
The elder Tang does not covet riches.
97 Gold-dispensing external aid meets demonic harm;
The sage reveals his soul to bring restoration.
98 Only when ape and horse are tamed will shells be cast;
With merit and work perfected, they see the Real.
99 Nine times nine ends the count and Māra’s all destroyed;
The work of three times three done, the Dao reverts to its root.
100 They return to the Land of the East;
Five sages become perfected.
Notes
Index