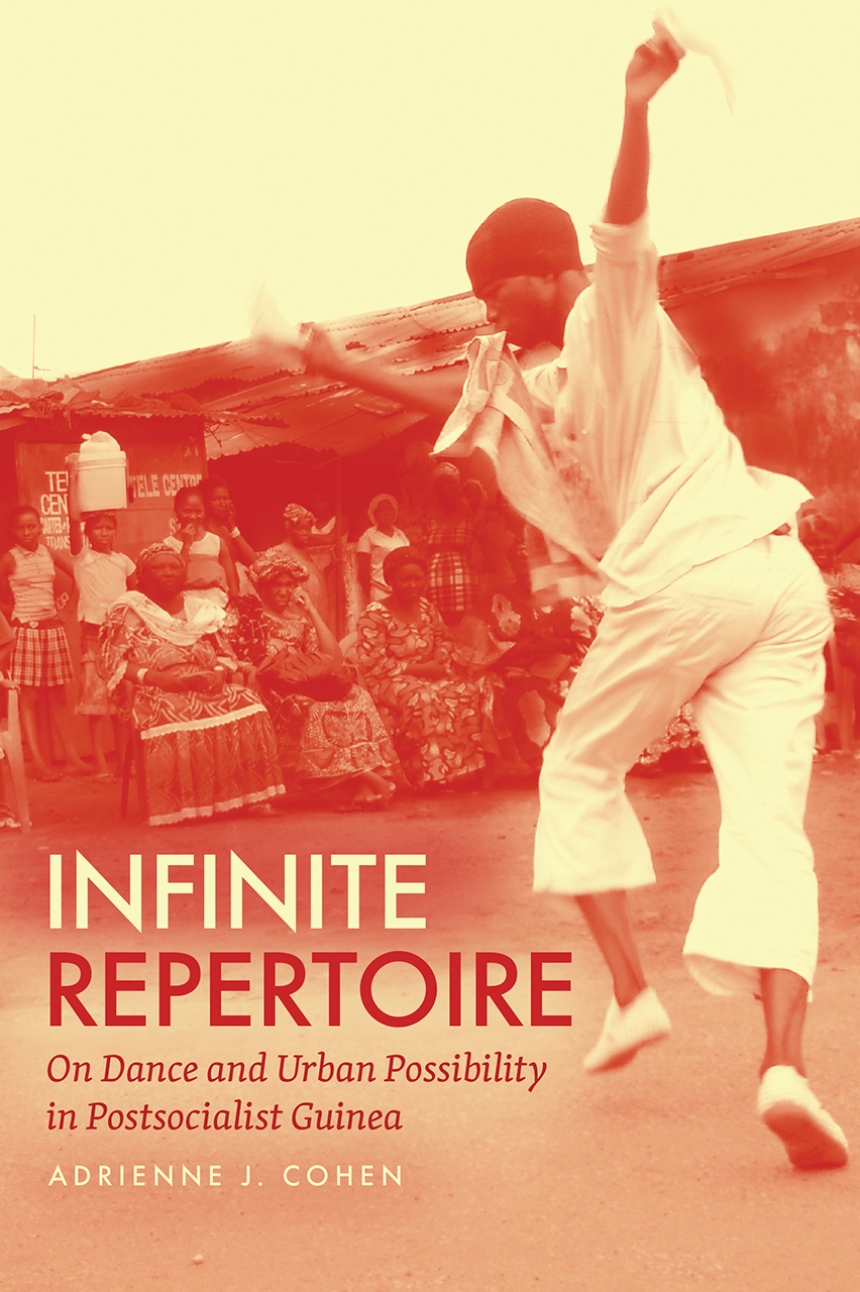 On Dance and Urban Possibility in Postsocialist Guinea

On Dance and Urban Possibility in Postsocialist Guinea

In Guinea’s capital city of Conakry, dance is everywhere. Most neighborhoods boast at least one dance troupe, and members of those troupes animate the city’s major rites of passage and social events. In Infinite Repertoire, Adrienne Cohen shows how dance became such a prominent—even infrastructural—feature of city life in Guinea, and tells a surprising story of the rise of creative practice under a political regime known for its authoritarianism and violent excesses. Guinea’s socialist state, which was in power from 1958 to 1984, used staged African dance or “ballet” strategically as a political tool, in part by tapping into indigenous conceptualizations of artisans as powerful figures capable of transforming the social fabric through their manipulation of vital energy. Far from dying with the socialist revolution, Guinean ballet continued to thrive in Conakry after economic liberalization in the 1980s, with its connection to transformative power retrofitted for a market economy and a rapidly expanding city. Infinite Repertoire follows young dancers and percussionists in Conakry as they invest in the present—using their bodies to build a creative urban environment and to perform and redefine social norms and political subjectivities passed down from the socialist generation before them. Cohen’s inventive ethnography weaves the political with the aesthetic, placing dance at the center of a story about dramatic political change and youthful resourcefulness in one of the least-studied cities on the African continent.

“Infinite Repertoire is a brilliant historical and ethnographic exploration of how aesthetics shape power and how politics are embodied. Ultimately a meditation on time, it argues that the contingencies of performances allow artists to recall the past while creating new narratives for potential futures. This book lyrically examines the interplay among creative improvisation, affective remembering, and material-semiotic order. Cohen shows how performers take account of their changing contexts to constantly remake meaningful and powerful signs.”

“Cohen examines the many informal dance troupes scattered across the urban landscape in Guinea today. In lively prose, Cohen shows how dance in Guinea is a mode of economic advancement as well as cultural performance, a political commentary on the state of things, and, finally, a way of making the world.”

“Guinea’s renown for spearheading ‘African ballet’ produced legions of dancers who today artfully combine semiotic resources from both the socialist past and neoliberal present. Infinite Repertoire offers a viscerally kinetic ethnography of the transformative power of dance to mobilize affect and imbue citizen-state relations with a vitality it would otherwise lack. Drawing on her extensive engagement with and participation in Conakry’s dance scene, Cohen crafts a brilliant analysis of postsocialist performativity that sets a new bar for parsing the relationship between aesthetics and politics.”

3.    The Discipline of Becoming: Ballet’s Pedagogy

4.    Female Strong Men and the Future of Resemblance

5.    Core Steps and Passport Moves: How to Inherit a Repertoire

6.    When Big Is Not Big Enough: On Excess in Guinean Sabar