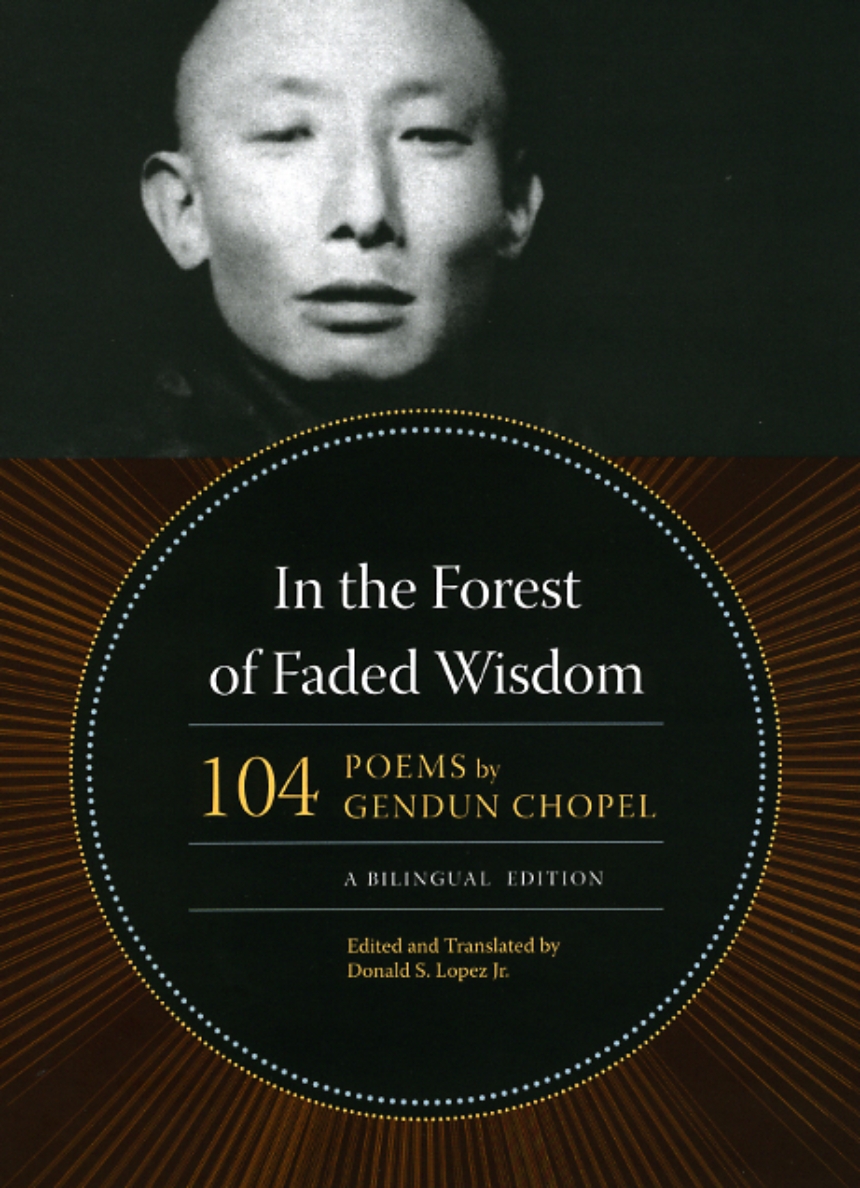 In the Forest of Faded Wisdom

In the Forest of Faded Wisdom

In a culture where poetry is considered the highest form of human language, Gendun Chopel is revered as Tibet’s greatest modern poet. Born in 1903 as British troops were preparing to invade his homeland, Gendun Chopel was identified at any early age as the incarnation of a famous lama and became a Buddhist monk, excelling in the debating courtyards of the great monasteries of Tibet. At the age of thirty-one, he gave up his monk’s vows and set off for India, where he would wander, often alone and impoverished, for over a decade. Returning to Tibet, he was arrested by the government of the young Dalai Lama on trumped-up charges of treason, emerging from prison three years later a broken man. He died in 1951 as troops of the People’s Liberation Army marched into Lhasa.

Throughout his life, from his childhood to his time in prison, Gendun Chopel wrote poetry that conveyed the events of his remarkable life. In the Forest of Faded Wisdom is the first comprehensive collection of his oeuvre in any language, assembling poems in both the original Tibetan and in English translation. A master of many forms of Tibetan verse, Gendun Chopel composed heartfelt hymns to the Buddha, pithy instructions for the practice of the dharma, stirring tributes to the Tibetan warrior-kings, cynical reflections on the ways of the world, and laments of a wanderer, forgotten in a foreign land. These poems exhibit the technical skill—wordplay, puns, the ability to evoke moods of pathos and irony—for which Gendun Chopel was known and reveal the poet to be a consummate craftsman, skilled in both Tibetan and Indian poetics. With a directness and force often at odds with the conventions of belles lettres, this is a poetry that is at once elegant and earthy. In the Forest of Faded Wisdom is a remarkable introduction to Tibet’s sophisticated poetic tradition and its most intriguing twentieth-century writer.

“If at the time of Gendun Chopel, the Tibetan people and the Tibetan government had lent even half an ear to him and acted accordingly, I have no doubt that Tibet and the Tibetan people would be in a different position than they are today. A better one. It is quite amazing that out of Tibet, which is usually considered a primitive, orthodox, forbidden land, someone like Gendun Chopel emerged. His remarkable poetry is a fitting legacy of this unique figure in modern Tibetan history.”

“What a treasury of poems! They are both historical and modern, both religious and deeply human, both Tibetan and universal. Gendun Chopel comes alive through these vivid, moving translations. This is a book that will be—should be—read for many years to come.”

“Donald S. Lopez’s translations of Gendun Chopel’s poetry, in the enticingly titled In the Forest of Faded Wisdom, invite us to set aside our outsider’s view of Tibet as a land of mystery and ponder complexities of the encounter there between tradition and modernism at the start of the twentieth century, while catching a glimpse of the shortcomings of our own ‘race of golden-haired monkeys.’ Gendun Chopel’s satire can be as truculent as Pound’s, his mysticism as resonant as Eliot’s, but there is nothing esoteric in his rule for scholars, one to be defended with one’s life: ‘The naked truth, terrifying to behold, is not to be covered with robes of self-deception.’”

"A pioneering translation. . . . In the Forest of Faded Wisdom makes Gendun Chopel accessible to both Western and Tibetan readers as no book before it has, and Donald Lopez is to be thanked for the many years of painstaking and fruitful labor that have led to its publication."

Teachings of a Master without Disciples

Laments of an Unknown Sage

The Ways of the World

Songs of the Tibetan Kings

Index of First Lines in English