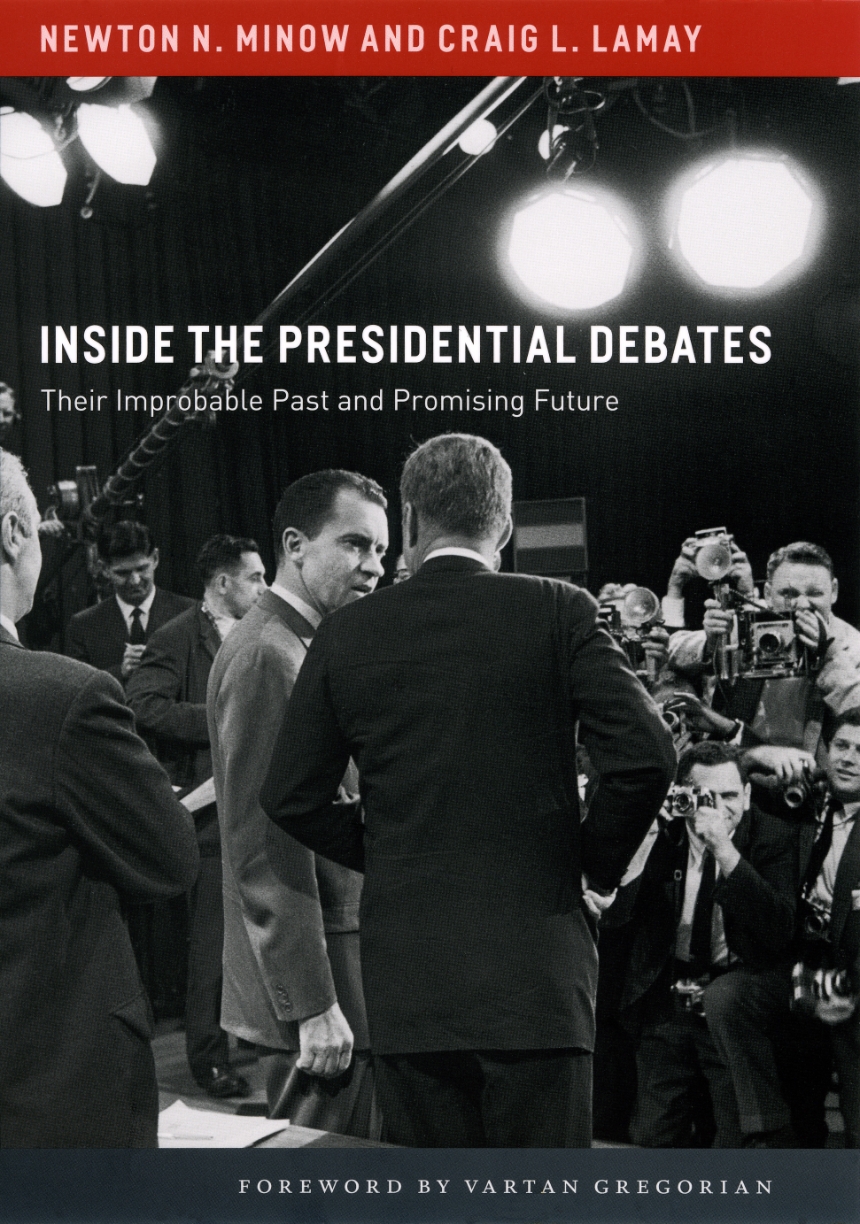 Inside the Presidential Debates

Their Improbable Past and Promising Future

Inside the Presidential Debates

Their Improbable Past and Promising Future

With a Foreword by Vartan Gregorian
Newton Minow’s long engagement with the world of television began nearly fifty years ago when President Kennedy appointed him chairman of the Federal Communications Commission. As its head, Minow would famously dub TV a “vast wasteland,” thus inaugurating a career dedicated to reforming television to better serve the public interest. Since then, he has been chairman of PBS and on the board of CBS and elsewhere, but his most lasting contribution remains his leadership on televised presidential debates. He was assistant counsel to Illinois governor Adlai Stevenson when Stevenson first proposed the idea of the debates in 1960; he served as cochair of the presidential debates in 1976 and 1980; and he helped create and is currently vice chairman of the Commission on Presidential Debates, which has organized the debates for the last two decades.
Written with longtime collaborator Craig LaMay, this fascinating history offers readers for the first time a genuinely inside look into the origins of the presidential debates and the many battles—both legal and personal—that have determined who has been allowed to debate and under what circumstances. The authors do not dismiss the criticism of the presidential debates in recent years but do come down solidly in favor of them, arguing that they are one of the great accomplishments of modern American electoral politics. As they remind us, the debates were once unique in the democratic world, are now emulated across the globe, and they offer the public the only real chance to see the candidates speak in direct response to one another in a discussion of major social, economic, and foreign policy issues.
Looking to the challenges posed by third-party candidates and the emergence of new media such as YouTube, Minow and LaMay ultimately make recommendations for the future, calling for the debates to become less formal, with candidates allowed to question each other and citizens allowed to question candidates directly. They also explore the many ways in which the Internet might serve to broaden the debates’ appeal and informative power. Whether it’s Clinton or Obama vs. McCain, Inside the Presidential Debates will be welcomed in 2008 by anyone interested in where this crucial part of our democracy is headed—and how it got there.

See memorable moments from presidential debates and read an excerpt from the book.

“Newton Minow is the father of televised presidential debates, the most important new political institution of the last half century. From his memo to Adlai Stevenson first suggesting the idea in 1955 to his sensible proposals for new formats in 2008, he has stood at the center of the ‘debate over debates,’ casting a cool eye on the medium and on the democratic process he has done so much to shape. This book tells that compelling story with wit, verve, and penetrating insight.”

“Newton Minow and Craig LaMay provide a fascinating look at the development of televised presidential debates and provide insightful suggestions on how to improve them. They’re the perfect persons to guide our thinking on this important topic, plus they’ve made the issues fun to read about.”

“There may be no one alive who cares more about America’s democracy than Newton Minow, who was there at the creation of the modern political debate. The riveting first-person stories he and Craig LaMay tell of debates in one election after another take us to the heart of American political life and argue for a continued central role for debates in our electoral process. Their book is must reading for anyone who wants to understand how to ensure that comes about.”

"No one is more qualified to write [this book] than Minow, who as chairman of the Federal Communications Commission under John F. Kennedy, called TV a ’vast wasteland’ and has been a key part of the presidential debates for decades. . . . He tells an important story well and briefly."

"Minow, an early organizer of the televised debates and the current vice chairman of the nonprofit, nonpartisan Commission on Presidential Debates, is [their] greatest champion and most clear-eyed critic. . . . [His] perspectives are peerless, and the timeliness and importance of the topic make for worthwhile reading."

“An utterly fascinating and timely glimpse into how the presidential debates were created, how they have evolved through the years, and the indispensable role they continue to play in our democracy. Minow and LaMay’s book is a gem.”

"An insightful look at America’s televised presidential debates. The authors present the story in a book destined to become a classic. . . . A delight to read; rarely does one encounter scholarly exploration expressed in prose lucid, enlightened, and laced with wit."

“Inside the Presidential Debates is a hybrid of genres—part history, part policy memoir, and part apologia—that quickly ebbs and flows among various topics, such as a personal anecdote from Minow to several pages of background on the Lincoln-Douglas debates of 1858 to a discussion of Saturday Night Live’s influence on how Americans understand modern debates. . . . Worthwhile reading.”

Appendixes
A          Memorandum of Understanding between the Bush and Kerry Campaigns, 2004
B          Negotiated Agreements between the League of Women Voters and the Ford and Carter Campaigns, 1976
C         Section 312 of the Communications Act: “Reasonable Access” for Candidates for Federal Office
D         Challenges to the CPD under Federal Election and Tax Law
E          Broadcast Debates and the First Amendment
F          The Televised Presidential Debates, 1960–2004