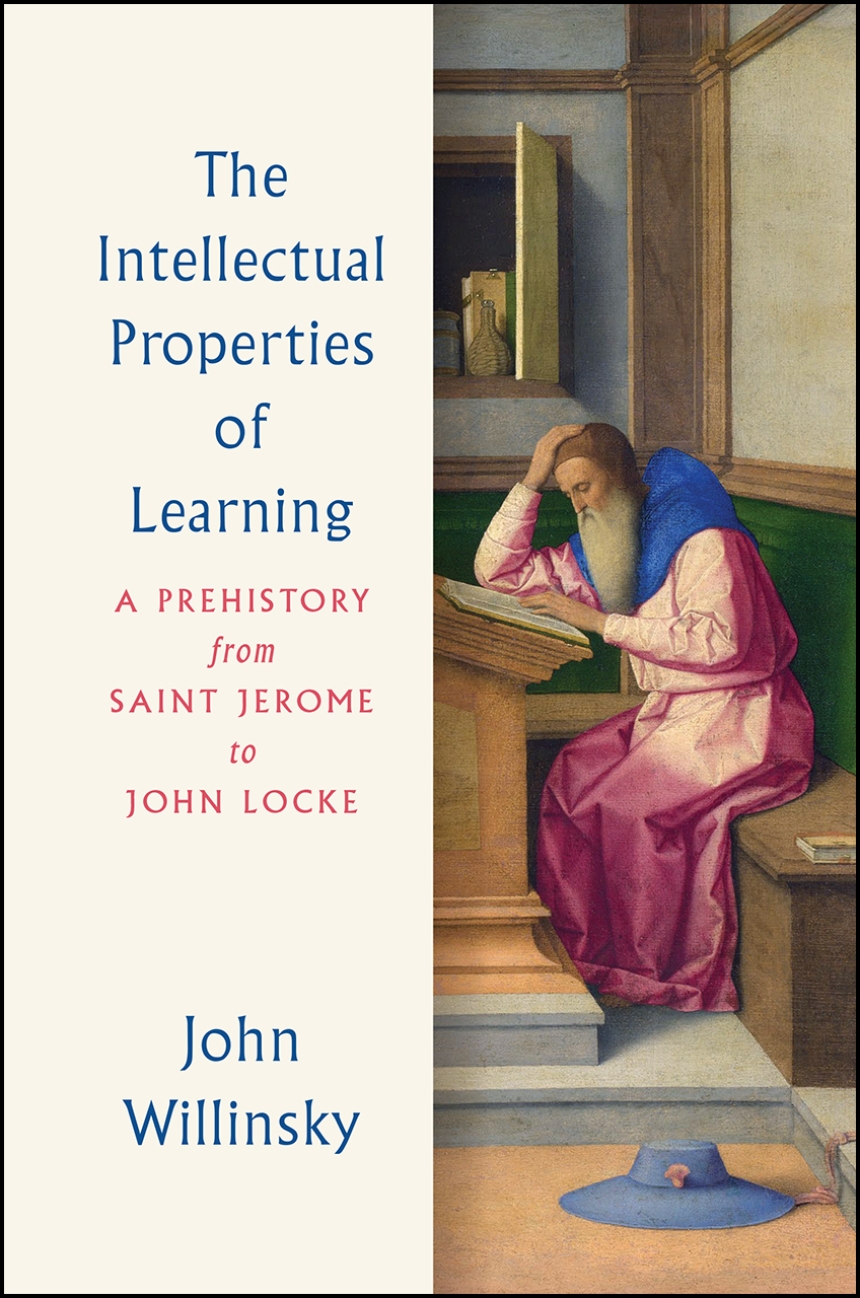 The Intellectual Properties of Learning

A Prehistory from Saint Jerome to John Locke

The Intellectual Properties of Learning

A Prehistory from Saint Jerome to John Locke

Providing a sweeping millennium-plus history of the learned book in the West, John Willinsky puts current debates over intellectual property into context, asking what it is about learning that helped to create the concept even as it gave the products of knowledge a different legal and economic standing than other sorts of property.

Willinsky begins with Saint Jerome in the fifth century, then traces the evolution of reading, writing, and editing practices in monasteries, schools, universities, and among independent scholars through the medieval period and into the Renaissance. He delves into the influx of Islamic learning and the rediscovery of classical texts, the dissolution of the monasteries, and the founding of the Bodleian Library before finally arriving at John Locke, whose influential lobbying helped bring about the first copyright law, the Statute of Anne of 1710. Willinsky’s bravura tour through this history shows that learning gave rise to our idea of intellectual property while remaining distinct from, if not wholly uncompromised by, the commercial economy that this concept inspired, making it clear that today’s push for marketable intellectual property threatens the very nature of the quest for learning on which it rests.

"Willinsky’s account takes us from the practices of monastic scriptoria to the early commercial copyists, organised by stationers, who pioneered forms of commercial publishing surrounding the Universities of Paris and Oxford in the 13th and 14th centuries. We learn about the parallel practices of Arabic scholars and scribes in European centres such as Spain as well as in north Africa and the Middle East—an important reminder that IP has always been a global phenomenon."

"Willinsky’s history is episodic, moving briskly between figures whose works illuminate shifts in these intellectual properties of learning. . . . A highlight of the book are the detours into contributions of those instrumental in shaping such practices yet who are often erased from the historical record. Willinsky emphasizes the overlooked labors of women that made possible the developments he details, and acknowledges their systematic exclusion from institutions of learning. He also devotes a chapter to the role of Islamic translation and its networks of patronage on which the evolution of European cathedral schools and, later, medieval universities, were deeply dependent. . . . In attending to past and present, across so expansive a timescale,
using primary and secondary literatures that span religion, law, science, and book history, The Intellectual Properties of Learning is an impressive work of synthesis. . . . offer[ing] a history that situates the present while offering cautions and possibilities for the futures of intellectual property that might yet be."

"To sum up: this book is the result of seriously impressive research by the author, and helps to explain his commitment to open access. It provides fascinating detail into the early history of scholarly discourse and publishing, and background to the development of the world’s first Copyright Act. It is warmly recommended to anyone interested in such subjects."

"Willinsky’s lucid, elegant, and thoughtful book rests on a play on words. It is concerned both with the ‘properties’ of learning in the sense of its changing characteristics, from the fifth century to the eighteenth, and also with ideas about what we now call ‘intellectual property’ in the same period, before the famous copyright laws of the eighteenth century and later . . . . It is a user-friendly summary of the conventional wisdom provided in many recent monographs, an ideal introduction for students."

"John Willinsky is a leader in the struggle for free and open online access to academic journals and other publications. In this outstanding study, he situates the contemporary struggle in the broader context of the long history of the Western 'commonwealth of learning' and the reciprocal responsibilities of all its members, from the fifth to the eighteenth century. This genealogy rediscloses our rights and responsibilities as fellow commoners today in a much deeper and inspiring light."

“Much is at stake in the copyright conflicts of the digital age, for they carry direct implications for the health of culture, education, research, and innovation. Hence, it's a joy to read John Willinsky’s exploration of the prehistory of these conflicts. He makes a strong case that this prehistory illuminates the principles that guide or ought to guide copyright law, that there are good reasons to recognize exceptions for teaching, learning, research, and study, and that if we knew what ‘properties’ made these intellectual practices worthy of special treatment, we could protect them more effectively. In the process, he establishes the urgency of this goal in the digital age, when these protections are under assault from corporate enclosure and legislative reforms that subordinate learning to commercial interests. Willinsky is very well-placed to make this case, both as a careful and engaging historian of learning and as leader in the movement to provide open access to research.”

“In making a conceptual and historical case for learning as a common good, The Intellectual Properties of Learning displays some of the best of learning’s virtues: attention to detail, patience with paradox, accessibility, and, above all, a desire to understand. An ambitious and hopeful book.”

John Willinsky’s fine book The Intellectual Properties of Learning is a masterful and comprehensive exposition of the prehistory of intellectual property rights and the conflicts that ensue when those rights are legally enforced. The

Chapter One
The Commonwealth of Learning

Part One: Monastery and School

Chapter Five
The Learned Turn of the High Middle Ages

Chapter Seven
The Medieval Universities of Oxford and Paris

Chapter Eleven
A Theory of Property

Chapter Twelve
An Act for the Encouragement of Learning