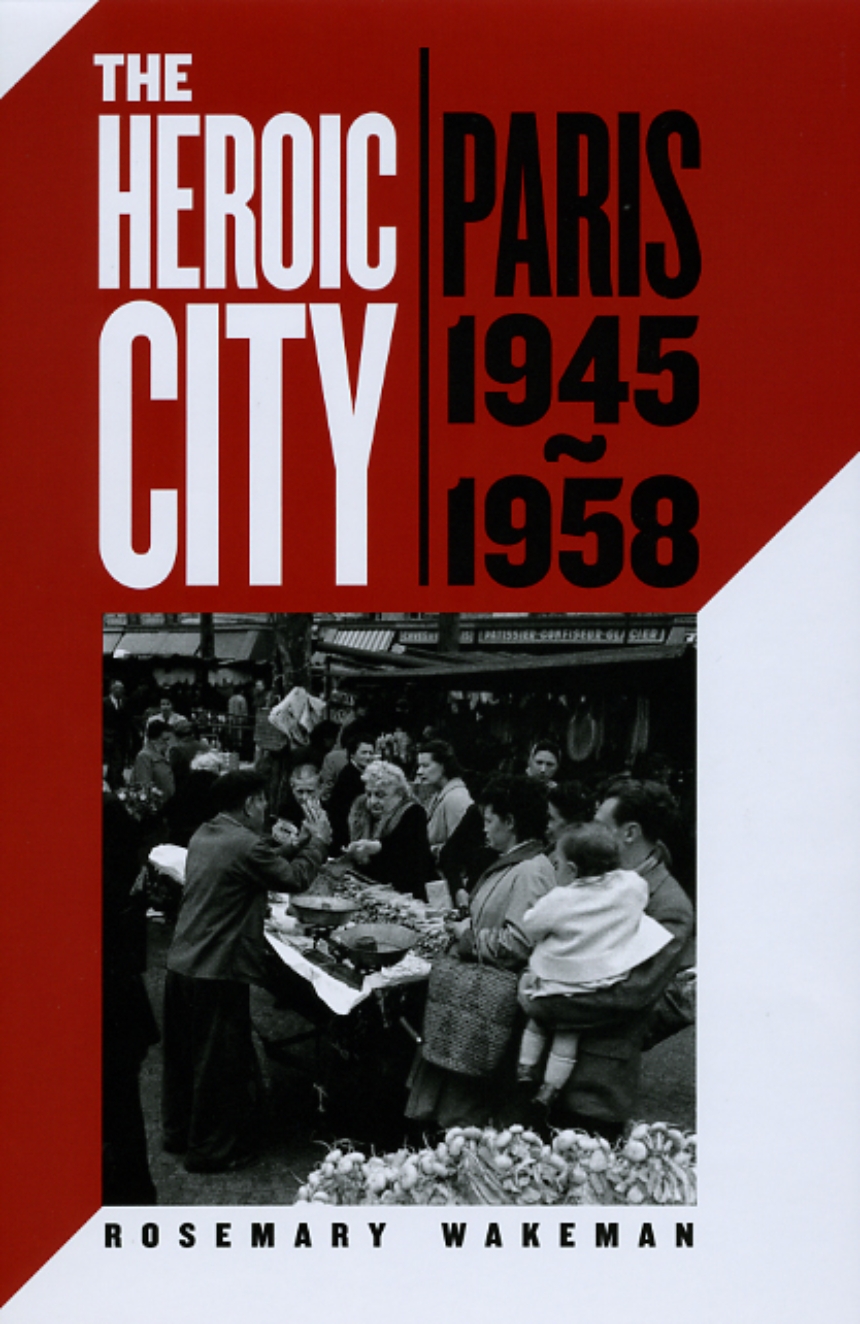 The Heroic City is a sparkling account of the fate of Paris’s public spaces in the years following Nazi occupation and joyful liberation. Countering the traditional narrative that Paris’s public landscape became sterile and dehumanized in the 1940s and ’50s, Rosemary Wakeman instead finds that the city’s streets overflowed with ritual, drama, and spectacle. With frequent strikes and protests, young people and students on parade, North Africans arriving in the capital of the French empire, and radio and television shows broadcast live from the streets, Paris continued to be vital terrain.

Wakeman analyzes the public life of the city from a variety of perspectives. A reemergence of traditional customs led to the return of festivals, street dances, and fun fairs, while violent protests and political marches, the housing crisis, and the struggle over decolonization signaled the political realities of postwar France. The work of urban planners and architects, the output of filmmakers and intellectuals, and the day-to-day experiences of residents from all walks of life come together in this vibrant portrait of a flamboyant and transformative moment in the life of the City of Light.

“The Heroic City is a warm and generous evocation for the Paris of the late 1940s and early 1950s. It is the story of the City of Light at the end of in its darkest decade, when it rose—fitfully—from four years of brutal and dispiriting German occupation. Poetic humanism is Wakeman’s leitmotiv, and it is brilliantly handled in these lucid and enticing pages. I learned a great deal from this very far ranging and charming book about imagined, poetic Paris, but also about everyday Paris, as the city moved from left to right, from penury to consumerism, from Stalinist Communism to Debord’s Situationism, and from historical Paris to Paris as it is today, the capital of world nostalgia.”

“A superb book filled with erudition. The brio of the writing conveys Wakeman’s passion for her topic, which is all to the good since Paris is so personal a subject. Wakeman has assembled an impressive amount of information about postwar Paris and has brought it to life with her energetic prose.”

“Wakeman dares a cultural and urban history of Paris during the dark years of the 1940s and 1950s from Vichy to the birth of the fifth republic. She gives life to a totally forgotten and hidden period of the capital’s life: the time of Liberation, cold war, and the struggle between Gaullists and Communists to control the city. Following the author through the public spaces and streets of Paris, the reader understands the major historical meaning of this urban transition between post-Haussmannism and the modernism of the Trente Glorieuses.”

"Wakeman shows how Parisians used urban public spaces after WWII as the venue in which they publicly negotiated their city’s cultural recovery during difficult years. Rather than seeing the postwar city as in decline or crisis, she shows the vibrant civic life that took place openly throughout Paris, including both entertainment and protest. . . . Recommended."

"Most histories of postwar Paris describe its transformation via Americanization, the emergence of mass consumer culture, and the urban planning decisions that destroyed nineteeth-century neighborhoods and replaced them with tower housing blocks. . . . Rosemary Wakeman breaks with this familiar narrative, arguing that urban planning and mass consumer culture did not start to alter Paris until the mid 1950s. . . . This is a true history of the city, firmly rooted in its physical, lived, represented, and imagined spaces. . . .The Heroic City is highly recommended."

2. The Landscape of Populism

4. Spatial Imagination and the Avant-Garde

Conclusion: Constructing the Paris of Tomorrow