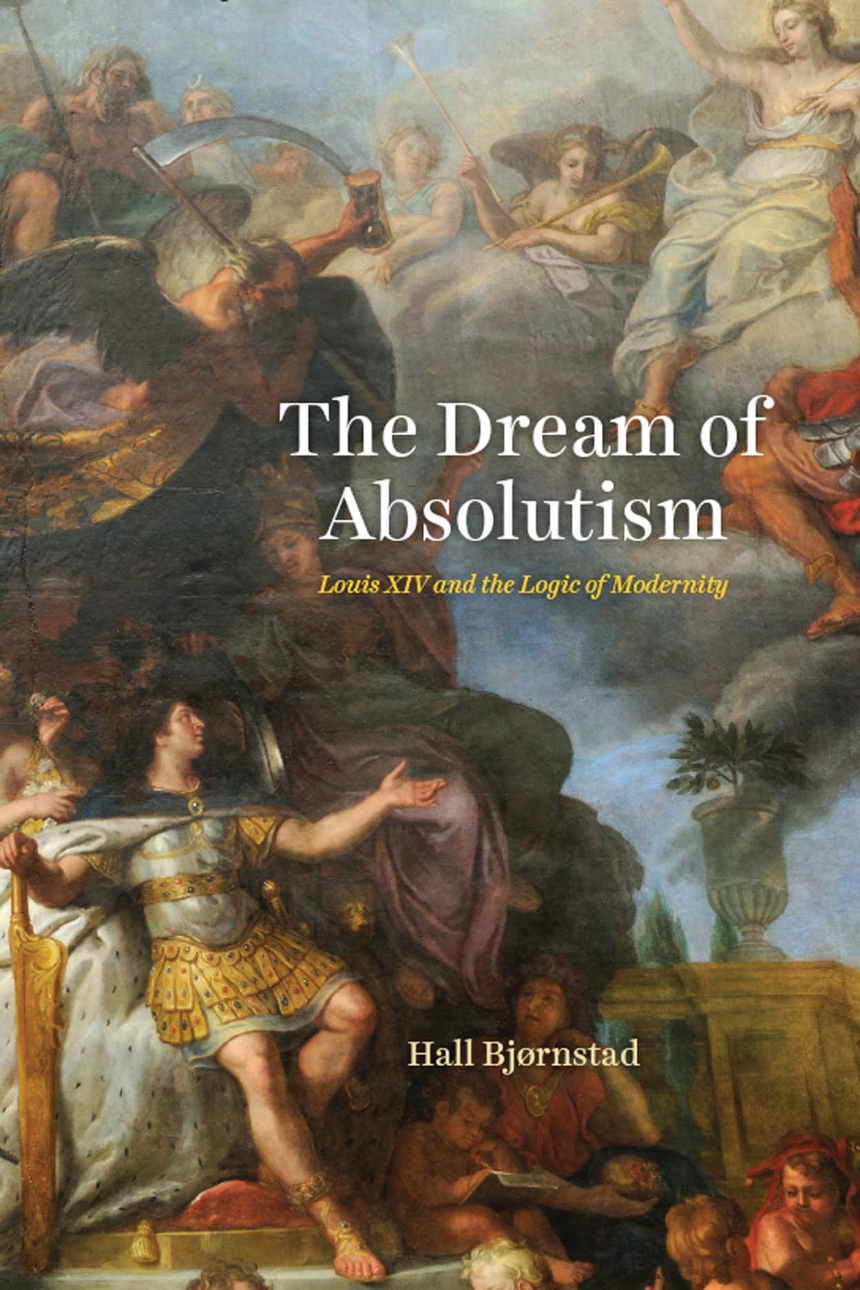 The Dream of Absolutism

Louis XIV and the Logic of Modernity

The Dream of Absolutism

Louis XIV and the Logic of Modernity

The Dream of Absolutism examines the political aesthetics of power under Louis XIV.

What was absolutism, and how did it work? What was the function of the ostentatious display surrounding Louis XIV at Versailles? What is gained—and what is lost—by approaching such expressions of absolutism as propaganda, as present-day scholars tend to do?

In this sweeping reconsideration of absolutist culture, Hall Bjørnstad argues that the exuberance of Louis XIV’s reign was not top-down propaganda in any modern sense, but rather a dream dreamt collectively, by king, court, image-makers, and nation alike. Bjørnstad explores this dream through a sustained close analysis of a corpus of absolutist artifacts, ranging from Charles Le Brun’s famous paintings in the Hall of Mirrors at Versailles via the king’s secret Mémoires to two little-known particularly extravagant verbal and textual celebrations of the king. The dream of absolutism, Bjørnstad concludes, lives at the intersection of politics and aesthetics. It is the carrier of a force that emerges as a glorious image; a participatory emotional reality that requires reality to conform to it. It is a dream, finally, that still shapes our collective political imaginary today.

“Eschewing the comfort of critical distance for the disarming rapture of intimacy, this book immerses us in the dream of absolutism. In this endlessly evocative tour of political theology at Versailles, Bjørnstad guides us through a virtual hall of mirrors composed of the texts, images, and environments that reflected and magnified the glory of Louis XIV. Practicing a form of reading backlit by the premodern virtues of dignity and decorum, Bjørnstad asks us to face the past in the originality of its most intense and disturbing commitments and he urges us to recognize our own captivation by a fantasy of power that remains with us today.”

Julia Reinhard Lupton, author of 'Shakespeare Dwelling: Designs for the Theater of Life'

“With grace and humor to match its inventiveness and deep learning, Bjørnstad’s new book turns scholarly consensus about the absolutist culture of the age of Louis XIV on its head. We have grown used to mining the art, literature, and philosophy of the period for critical awareness of absolutism’s inevitable defeat. Bjørnstad demonstrates that, on the contrary, absolutism was the self-defeating dream of elite culture as a whole, a fantasy of unequaled national as well as royal glory that planted the seeds for absolutism’s overthrow less by exposing its irrationality than by nourishing collective delusions of grandeur that could never be realized.”

“The Dream of Absolutism is a probing, innovative, scintillating, and daring anthropology of seventeenth-century French political aesthetics. It advocates for a specific way of reading texts, images, and archives in order to apprehend what monarchy, representation, and politics might have meant when understood on their own terms, stripped of all the ideological freight laid upon these concepts in the aftermath of the eighteenth century. By reading texts that are both at the center of seventeenth-century monarchical design and yet either neglected, forgotten, misread, or newly uncovered by scholars, Bjørnstad’s excavates a new seventeenth-century monarchism.”

"This book is not about Louis XIV nor even about one man’s unquenchable thirst for power centuries ago. It is, rather, an analysis of a dream culture driven by its own logic and frighteningly relevant today. . . . This is a remarkable study of an important subject."

"In showing us a dream that renders uninterpretable objects the objects of interpretation, in offering a language of absolutism at once private and participatory, Bjørnstad gives his reader the equipment to notice something new about mere propaganda, regardless of the century in which one observes it. For this illuminating book impels its reader not to take such a dismissal at face value; it permits us to think anew about what mere propaganda contains within it."

"In his erudite and exciting new book, Bjørnstad urges those of us who study premodern France and its afterlives to take another look at absolutism. . . . Although The Dream of Absolutism is most explicitly a book about the past, the present lurks behind every gilded corner. Incisive and capacious, Bjørnstad’s book should be read widely, by specialists of early modern France, of course, but also by intellectual historians, political theorists, and students of contemporary politics."

"Bjørnstad’s important study thus intersects in thought-provoking ways with eighteenth-century and modern accounts of civil society, sociability, and sovereignty, and opens potential new areas for inquiry. . . . It will become an important contribution to our understanding of French culture and politics at the intersection of the seventeenth and eighteenth centuries and beyond."

"A new, thoroughly refreshing look at the complex topic of absolutism."

List of Illustrations
A Note on Translations and Spelling
Preface
Introduction
1. The Problem with Absolutism
2. Beyond Mere Propaganda
3. Approaching Absolutism Differently: Royal Glory and Royal Exemplarity
4. The Dream of Absolutism
Chapter 1: The Grammar of Absolutism
1. Introduction: The Dream of a Book Like No Other
2. Taking Louis XIV’s Mémoires Seriously
3. Absolutism, Explained to a Child: “The first and most important part of our entire politics”
4. The Utility of “These Mémoires”
5. The Paradoxes of Absolutist Exemplarity
6. Conclusion: “So many ghastly examples”
Chapter 2: Mirrors of Absolutism
1. Introduction: Our Body in This Space
2. An Age of Mirrors
3. A Gallery Celebrating Greatness
4. Making the King See What He Felt
5. A Mirror for One
6. In Lieu of Conclusion: Mirrors for a Future without a Past
Chapter 3: Absolutist Absurdities
Exhibit A: The Royal Historiographer and the Unparalleled Greatness of Louis XIV
Exhibit B: Absolutism from the Cabinet of Fairies to the Cabinet of the King
Conclusion: Seven Theses on the Dream of Absolutism
Acknowledgments
Bibliography
Index