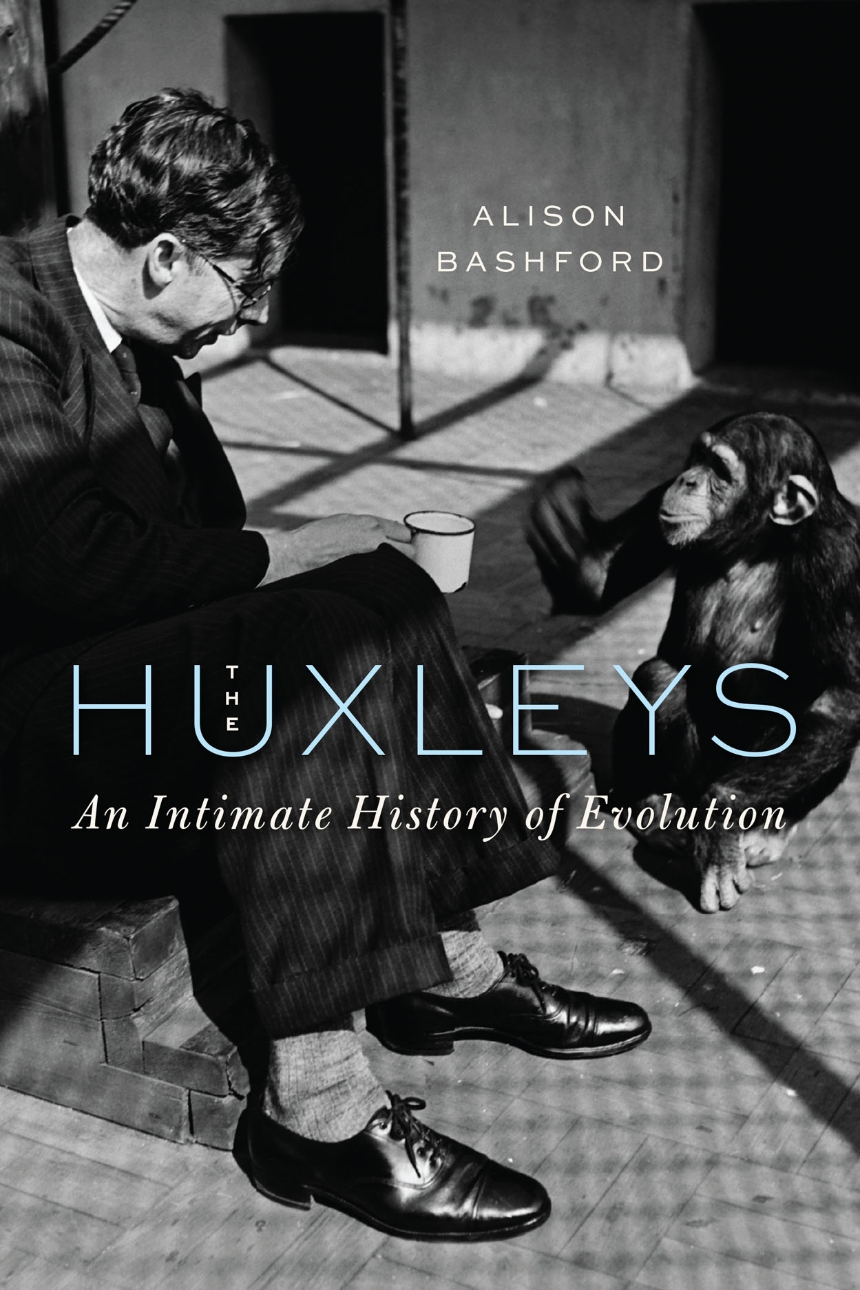 An Intimate History of Evolution

An Intimate History of Evolution

A New Yorker and Economist Best Book of the Year

Two hundred years of modern science and culture told through one family history.

This momentous biography tells the story of the Huxleys: the Victorian natural historian T. H. Huxley (“Darwin’s Bulldog”) and his grandson, the scientist, conservationist, and zoologist Julian Huxley. Between them, they communicated to the world the great modern story of the theory of evolution by natural selection. In The Huxleys, celebrated historian Alison Bashford writes seamlessly about these omnivorous intellects together, almost as if they were a single man whose long, vital life bookended the colossal shifts in world history from the age of sail to the Space Age, and from colonial wars to world wars to the cold war.

The Huxleys’ specialty was evolution in all its forms—at the grandest level of species, deep time, the Earth, and at the most personal and intimate. They illuminated the problems and wonders of the modern world and they fundamentally shaped how we see ourselves, as individuals and as a species.

But perhaps their greatest subject was themselves. Bashford’s engaging, brilliantly ambitious book interweaves the Huxleys’ momentous public achievements with their private triumphs and tragedies. The result is the history of a family, but also a history of humanity grappling with its place in nature. This book shows how much we owe—for better or worse—to the unceasing curiosity, self-absorption, and enthusiasms of a small, strange group of men and women.

"It was fitting for a man known as 'Darwin’s bulldog' that his descendants inherited many of his traits—not just his talents but also his affinity for certain sweeping questions: Who are we? What is our place in nature? How can we design morality and religion in a world informed by science? In The Huxleys: An Intimate History of Evolution, the historian Bashford moves across the Huxley generations, tracing how Thomas Henry and his gifted brood struggled to answer these questions, in the process shaping outlooks we hold today. . . . Evolution is a messy, nuanced, protean picture of our origins. It offers many stories, yet those which we choose to tell have their own momentum. It can serve as a banner of our common humanity or as a narrative of our staggering differences. It can be wielded to fight racism or weaponized to support oppression. It can inspire new forms of piety or be called on to destroy dogma. The social meanings of evolution, like so much else, are part of a grander inheritance."

"The Huxleys wrote about evolution as a romance, an epic of progress and transformation. In their own lives and observations they also saw the cruelty of science and the bleaker aspects of inheritance. . . . Both sides, and both men, are painstakingly illuminated by Bashford. Balancing scholarly rigor with an eye for the absurd, her book reveals the human drama behind scientific fact."

“A daring and joyously intelligent book on Huxley, his family, and their immense legacy. . . . The intellectual vigor, the capacity to formulate startling ideas, the books and lectures, the committees and public campaigns, the sheer weight of deskwork, to say nothing of the disturbed minds and households of the Huxleys could make a cluttered or shapeless narrative. It is an astounding achievement that Bashford has transformed such a super-abundance of material into a richly rewarding and comprehensible book. The Huxleys brings the reader into easy familiarity with great minds at work."

"Bashford’s book is an intriguing hybrid. A deeply researched biography of Thomas Henry, Julian, and the wider Huxley family, the result of close examination of their writings and correspondence, it also serves as an intellectual history of Britain through the radical shifts in science and society that gave birth to modernity. . . . The whole of British intellectual life seems accessible through some branch of this sprawling family tree."

"Generates some illuminating parallels. . . . Bashford includes some excellent stories about both men. . . . Both Huxleys would have appreciated the breadth of Bashford’s research and her skill at explaining heavyweight scientific ideas with a light touch"

"A masterpiece of biography. . . . A vivid account of a family at the heart of some of the great cultural shifts of the modern era."

"Ambitious. . . . Spans a century and a half, combining the stories of two English pioneers of rational scientific inquiry who helped transform public understanding of the origins of life. Together, they comprised ‘a modern-day scientific Janus, the Roman god who could look backwards and forwards, as well as inside and outside, simultaneously.’ A large claim, particularly in the case of two men who had little time for gods. . . . Marked out by the twin poles of the Huxleys’ curricula vitae, it is also a biography of ideas, using one family’s history to explore the development of theories about generations, genealogy and genes, chronicling shifting attitudes to religion, race, women, and animal experimentation—from morphology to ethology."

"A scholarly study of T. H. Huxley and his grandson. . . . [And a] guide to the history of evolutionary thinking. . . . It's impressive that Bashford can command both these types of writing with equal authority."

"The Victorian biologist and anthropologist T. H. Huxley and his UNESCO director grandson, Julian, are compelling twin poles in this wonderfully ambitious saga of a scientific dynasty."

"[A] patient, sympathetic portrait of a family riven with flaws."

“In Bashford’s account, biology and politics are but the warp and weft of what must be one of the most compelling and tragic multigenerational scientific legacies. For while Thomas Henry, Julian, and their many achievements are in the story’s foreground, it is the lives, loves, and losses that wracked this family that underlie Bashford’s tale. . . . Bashford tells the story of these intertwined lives with sympathy and candor but also with dexterity, as she weaves together themes not beholden to a linear chronology. Readers follow the Huxleys as they contemplate nonhuman animals, primates, man, and mind in their intergenerational quest to understand the implications of evolution on what it means, or might mean, to be human.”

"The quasibiographical approach, grounded in a wealth of personal correspondence, makes this history of evolution more accessible and relatable than a history of the idea itself would be. Bashford traces a cultural phenomenon that has profoundly shaped society and revolutionized our understanding of what it means to be human."

"A sweeping, intelligent look at a trailblazing family. . . . ’The layers of Huxley introspection were endless,’ writes historian Bashford in her deftly crafted biography of this illustrious British family. Throughout The Huxleys, Bashford shows the impact of Huxley introspection on science, literature, religion, society, and one another for almost two centuries. . . . With the book’s subtitle—An Intimate History of Evolution—Bashford makes clear that just as evolution can explain populations over the course of millennia, it can also shed light on a family like the Huxleys within the span of a few generations."

"Through the Huxleys, grandfather and grandson, Bashford traces the evolution of thinking about humankind's place in nature and our relationship to it. This path is not that of relentlessly growing rationalism as religion and superstition become eclipsed by modernity. The truth is far more interesting. . . . Bashford elegantly reminds us that science has never banished the sacred for the secular, the irrational for the logical. Rather, it creates opportunities for new syntheses, new configurations of life, mind, soul, body, nature, and society."

"Scrupulously researched and broad in scope, taking in three generations of the talented Huxley dynasty. A formidable undertaking, yes, but also lucid, lively and addictive—a book for that creature beloved of publishers, the avid general reader. Its weighty scholarly apparatus does not interfere with the narrative flow; the generous visual component of the book is not merely illustrative but rather an integrated and striking adjunct to which Bashford often has recourse."

"It would be difficult to overstate the debt of gratitude owed to the Huxley dynasty for our knowledge of evolution in all its forms. Bashford narrates the fascinating story of two-hundred years of modern science and culture through one family history, focusing primarily on the patriarch."

"What a family, what a story, and so cleverly told. Bashford constructs a narrative that intertwines the lives of four generations of Huxleys, boldly forgoing traditional chronology for illuminating synthesis. Absolutely fascinating."

“Packed with insights into the brilliance of three generations of the Huxley family, Bashford’s book tells a magnificent story about the huge personalities and shortcomings that propelled evolutionary science and much else besides. Male and female, from Victorian patriarch to zoo director, authors, lovers, and poets: the pages dance with accounts of contemporary literature, psychology, politics, anthropology, religion, and art.”

Janet Browne, author of "Charles Darwin: A Biography" and "The Quotable Darwin"

"Full of surprises on every page, this book makes you wonder why all history can’t have the engaging intimacy of a novel. Bashford brilliantly marries intellectual history with the story of four generations of a great family in a literary tour de force."

“Bashford has crafted a masterful biography of Thomas Henry Huxley, patriarch of an evolutionary dynasty, his inheritor and grandson Julian, and the families that sustained them. Interweaving their public contributions to science and private poems, she deftly charts a generational quest to understand and articulate the human condition.”

"This beautifully crafted double biography of Thomas Huxley and his grandson Julian is full of wonderful surprises and profound generational insights, revealing what it means to put a public face to scientific controversy at two very different points in history."

"Over three generations, the extraordinary Huxley family have changed and reshaped the way we see ourselves. Now Bashford has written a fascinating book that links T. H. Huxley, the great Victorian scientist with a Caribbean-born wife, to their remarkable grandchildren, Aldous and Julian, in a way that shows how the family struggled with depression and even lunacy while emphasizing the crucial role played by the wives, sisters and daughters of these strange and brilliant men. It's a wonderful and important story, one that held me enthralled from start to end."

"I was captivated from beginning to end by the richness of the detail, the flaws and all personal biographies, and most of all blown away by the intimate narrative of how the biggest science stories of the age had a Huxley as ringmaster or provocateur at their heart."

"Bashford's intimate story of the Huxley clan reveals the ambiguities that arise if we apply modern values to past heroes. Here science, society, and personalities interact to bring the past alive."

Part I     Genealogies
1 Generations: The Huxleys, 1825–1975
2 Trustees of Evolution: The Intellectual Inheritance
3 Malady of Thought: Huxley Minds and Souls

Part II     Animals
4 Creatures of the Sea and Sky
5 Animal Politics: From Cruelty to Conservation
6 Primates: Apes and the Huxleys

Part IV     Spirits
10 Other Worlds: The Re-enchantment of the Huxleys