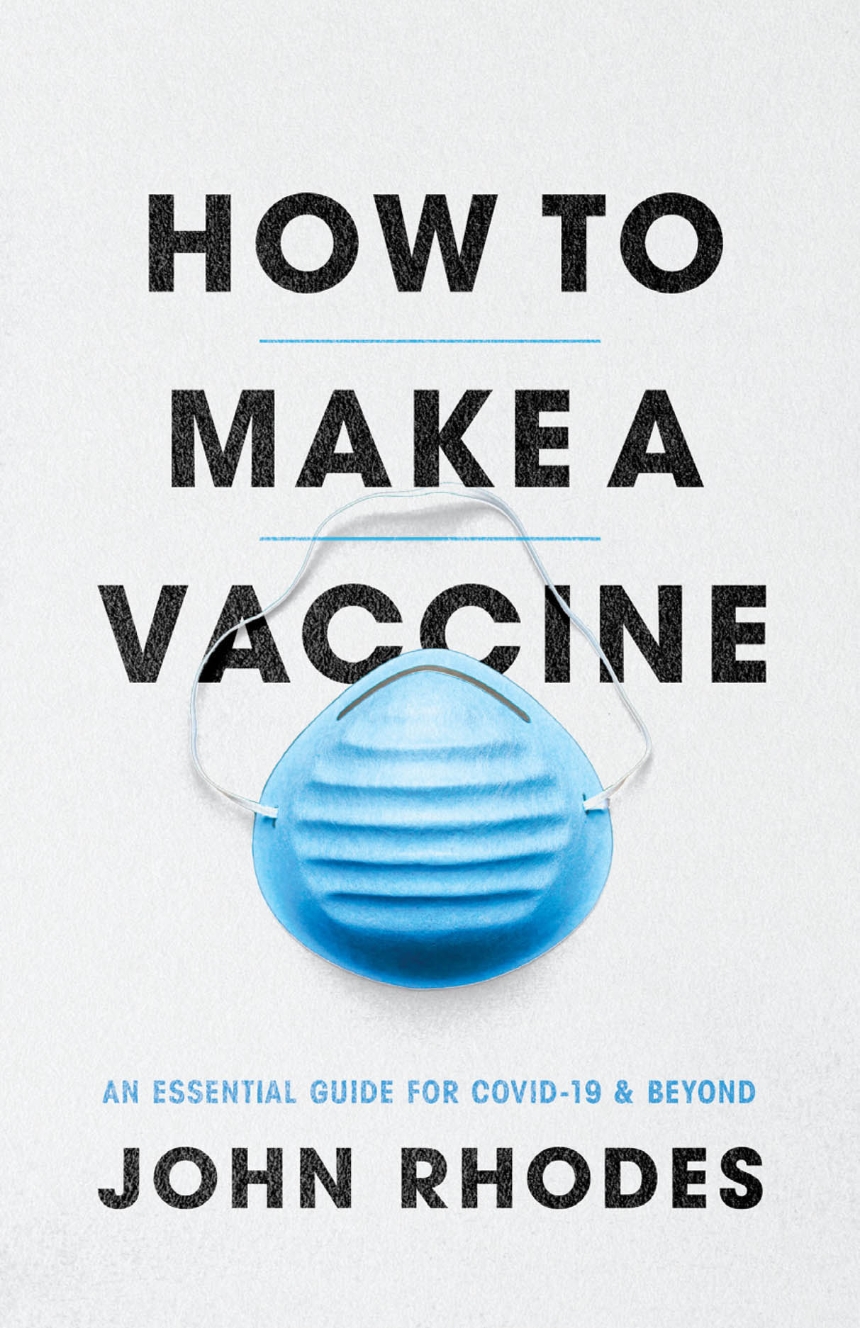 How to Make a Vaccine

An Essential Guide for COVID-19 and Beyond

How to Make a Vaccine

An Essential Guide for COVID-19 and Beyond

Distinguished expert in vaccine development John Rhodes tells the story of the first approved COVID-19 vaccines and offers an essential, up-to-the-minute primer on how scientists discover, test, and distribute vaccines.

As the COVID-19 pandemic has affected every corner of the world, changing our relationship to our communities, to our jobs, and to each other, the most pressing question has been—when will it end? Researchers around the globe are urgently trying to answer this question by racing to test and distribute a vaccine that could end the greatest public health threat of our time.  In How to Make a Vaccine, an expert who has firsthand experience developing vaccines tells an optimistic story of how three hundred years of vaccine discovery and a century and a half of immunology research have come together at this powerful moment—and will lead to multiple COVID-19 vaccines.

Dr. John Rhodes draws on his experience as an immunologist, including working alongside a young Anthony Fauci, to unravel the mystery of how vaccines are designed, tested, and produced at scale for global deployment. Concise and accessible, this book describes in everyday language how the immune system evolved to combat infection, how viruses responded by evolving ways to evade our defenses, and how vaccines do their work. That history, and the pace of current research developments, make Rhodes hopeful that multiple vaccines will protect us. Today the complex workings of the immune system are well understood. The tools needed by biomedical scientists stand ready to be used, and more than 160 vaccine candidates have already been produced. But defeating COVID-19 won’t be the end of the story: Rhodes describes how discoveries today are also empowering scientists to combat future threats to global health, including a recent breakthrough in the development of genetic vaccines, which have never before been used in humans.

As the world prepares for a vaccine, Rhodes offers a current and informative look at the science and strategies that deliver solutions to the crisis.

"A go-to guide for non-experts on vaccine development."

"At a time when online searches for books on vaccines are more likely to turn up misinformation than reliable literature, How to Make a Vaccine is a required primer that demystifies concepts and gives an informative overview of how vaccines are developed and how they work. An essential guide indeed."

“A great book for those wanting to know the background. Rhodes covers many fascinating details in immunology and the history of vaccine discoveries, as well as the basic science behind the development of COVID-19 vaccines, a topic which couldn’t be more important.”

“Rhodes is undoubtedly the right person to offer this timely and excellent explanation of a very topical story of great public interest. He is not only a well-respected immunologist, but also has personal experience in vaccine development.”

"This concise book is wide-ranging in the topics covered; from the history of immunology and vaccinology to the early development of multiple COVID-19 vaccines. It explains many of the areas of vaccine development that are rarely discussed, leaving the public wondering what takes so long, and reminds us that vaccines are a wise investment for both our own health and that of the economy."

Let’s rerun, for a moment, the alarming calendar of events at the start of the COVID-19 pandemic. On December 30, 2019, Chinese health officials report a cluster of pneumonia cases in the city of Wuhan in Central China to the National Health Commission. Chinese authorities set in motion an investigation to understand and contain the disease. By January 7, Chinese scientists have isolated a mystery virus and analyzed the genetic material, naming the deadly pathogen SARS-CoV-2.
On January 11, we learn of the first recorded death, and on January 23, the local government in Wuhan locks down the city. By January 24, China reports 835 cases, while in Korea and Japan, cases are on the rise. A little over six weeks later, on March 11, with 116,558 cases worldwide and more than 4,000 dead, the WHO declares the SARS-CoV-2 outbreak a global emergency. The pandemical disease caused by the virus is named COVID-19. By this date, the United States has confirmed more than 1,000 cases across 38 states, the United Kingdom has reported six deaths, and Italy, the worst hit country in Europe, reports 631 people have died of the disease.
Imagine yourself a vaccinologist facing the task of finding a solution. The threat to humanity is ancient, but you must urgently pursue the best possible strategy, exploiting the hard-won knowledge of the past 200 years. What kind of resources are available? And where could you possibly begin?
The answer is less bewildering than you might imagine. Assuming you want to avoid risks and be confident of success with proven technologies, you have six choices. This is because six classes of established vaccines already exist and are highly amenable for adaptation as novel vaccines to combat new threats, whatever the pathogen might be. On the other hand, if you are ambitious enough to consider something new—something potentially revolutionary in terms of production and versatility, you have two additional options, poised, after decades of laboratory development, to enter the clinical arena. Let’s review the options.

We have used this class of vaccines since the late 19th century and most famously in the mid-20th century, when the inactivated vaccine developed by Jonas Salk in 1954 initiated a long journey to the final eradication of a dread disease—polio—across the developed world. But this approach is not in any way outdated or obsolescent in combating even the most formidable infectious threat. China is championing this approach today.
A traditional Chinese story tells of the miracle-working doctor Wang Shi’er: “The difference between a miracle worker and a [merely] famous doctor is like the difference between heaven and earth. When you get sick, . . . when you are about to die at any moment and other people don’t know what to do, he does. What he comes up with isn’t a tried-and-trusted remedy either; it is a flash of inspiration.” Dr. Wang Shi’er goes on to remove a metal splinter from a blacksmith’s eye with a novelty magnet. But scientists based in China’s capital, Beijing, may well save lives miraculously with precisely the opposite approach: these are the vaccine experts who have opted for the most old-fashioned, tried- and-trusted vaccine you could possibly wish for.
There is no virtue per se in producing a high-tech vaccine for the sake of it. The value comes from additional efficacy, speed of manufacture, improved safety profile, or some other tangible benefit of advanced technology. If the vaccine is safe and effective, then traditional is as good as anything, and more likely to be safe in large human populations. The Beijing scientists, led by Gao Qiang, set about collecting viruses washed from the lungs of COVID-19 patients across a range of nationalities in order to produce a representative mix of viral variations. They then selected one common strain and reserved another 10 strains for subsequent viral challenge studies in animals. The group purified the chosen virus strain then grew it in a continuously proliferating cell line called Vero. This valuable cell line began its life on March 27, 1962, in the hands of scientists at Chiba University near Tokyo in Japan. Japanese investigators derived the line from cells taken from the kidneys of African green monkeys. The international language, Esperanto, was in vogue at the time, and the name they chose comes from an abbreviation of verda reno, which means “green kidney.” In Esperanto, vero also means “truth.” The Vero cell line is the one most widely accepted by regulatory authorities and has been used for over 30 years for the production of polio and other virus vaccines. This makes it an excellent choice for producing new vaccines against emerging pathogens.
The SARS-CoV-2 virus was then grown in Vero cells in large (50 liter) culture vessels and subjected to further investigations. These showed that the virus, including the gene for the spike protein (the part of the coronavirus that binds ACE2) was stable in this cellular environment, allowing researchers to proceed. The next step was to kill the virus. In the history of vaccines, the conventional way to kill vaccine viruses has been with formaldehyde, which “pickles” the virus, retaining its native shape, helping to ensure that the immune system can identify it. In this case the scientists used a chemical called β-propiolactone, which is more targeted than formaldehyde. It has been used to kill influenza viruses, and although scientists do not completely understand how it kills viruses, they believe it poisons the proteins whose function is to get the virus inside human cells. After killing the virus, the researchers checked to make sure its shape wasn’t damaged. Happily, using an electron microscope, the team of scientists saw discrete, intact, oval shapes “embellished with crown-like spikes,” confirming that the virus’s shape was unaltered.
As with almost all nonliving vaccines, an enhancing agent, or adjuvant, is necessary to provoke a strong immune response, and the Beijing researchers chose the tried-and-trusted adjuvant alum, widely used in childhood vaccines. Repeat injections are also needed with killed vaccines. Mice and rats were immunized twice at two dose levels and antibodies to SARS-Cov-2 spike protein and another protein, from the core of the virus, were measured. Antibodies to the spike protein dominated the response—just what is needed in a COVID-19 vaccine. The levels of these antibodies in vaccinated mice were 10 times higher than levels seen in patients recovered from COVID-19—an encouraging picture, though the comparison should be viewed with caution. The antibodies produced in response to the vaccine also neutralized the full range of viral subtypes—another promising indication.
Researchers then moved on to a protection model in macaques. Animals received three injections of the killed vaccine and then received the COVID-19 virus directly into the lungs. Seven days after being infected, all four animals in the high-dose group had no detectable virus in the respiratory tract. In great contrast, animals in the control group had pneumonia and high levels of virus in the lungs. The Beijing team published their findings in Science on May 6, 2020.
Meanwhile, their clinical collaborators had received regulatory permission to proceed with a combined phase I/II clinical trial (a randomized, double-blind, placebo-controlled study). By April 17, the first group of volunteers had received the first dose of vaccine. Volunteers were then given two doses, 14 days apart in one group and 28 days apart in a second group, and two dosage levels were employed. The study included 144 healthy adults, ages 18 to 59. Two-thirds of the volunteers were vaccinated with killed vaccine while one-third received placebo. The trial was conducted in Jiangsu Province near Shanghai. Eight other COVID-19 vaccine candidates in the inactivated whole-virus class began development in 2020.