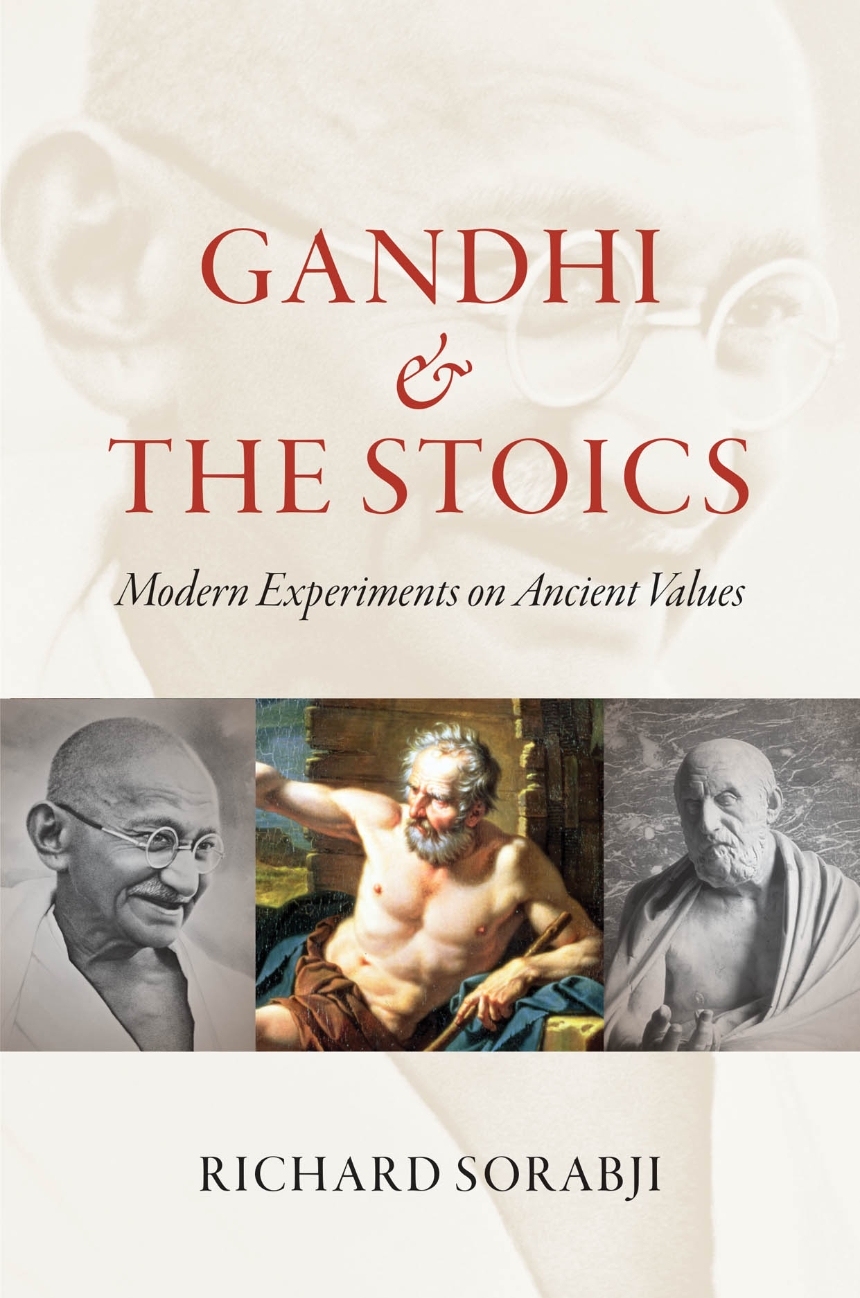 Gandhi and the Stoics

Gandhi and the Stoics

“Was Gandhi a philosopher? Yes.” So begins this remarkable investigation of the guiding principles that motivated the transformative public acts of one of the top historical figures of the twentieth century. Richard Sorabji, continuing his exploration of the many connections between South Asian thought and ancient Greek and Roman philosophy, brings together in this volume the unlikely pairing of Mahatma Gandhi and the Stoics, uncovering a host of parallels that suggests a deep affinity spanning the two millennia between them.
While scholars have long known Gandhi’s direct Western influences to be Platonic and Christian, Sorabji shows how a look at Gandhi’s convergence with the Stoics works mutually, throwing light on both of them. Both emphasized emotional detachment, which provided a necessary freedom, a suspicion of universal rules of conduct that led to a focus not on human rights but human duties—the personally determined paths each individual must make for his or her self. By being indifferent, paradoxically, both the Stoics and Gandhi could love manifoldly. In drawing these links to the fore, Sorabji demonstrates the comparative consistency of Gandhi’s philosophical ideas, isolating the specific ideological strengths that were required to support some of the most consequential political acts and experiments in how to live.

“Gandhi and the Stoics shows us how valuable a comparative approach can still be in providing us with new ways of reading some of the world’s most influential texts, as well as in reflecting on one of the twentieth century’s most influential human lives.”

“[I]mpressive in its restraint, objectivity, and balance of research with reasoning….[T]his nuanced, readable book offers a worthy alternative to our impassioned politics of power and pity—namely, Gandhi’s numinous politics. Although historical, Sorabji’s method is also philosophical and theological. Using his comparison to shed light on Gandhi, the Stoics, and the ideas themselves, he also uses each to improve the other. Academically unique, because ‘few have noticed the much more indirect relation [of Gandhi] to the Stoics’, such comparative works heal post-colonial fissures with their lofty cosmopolitanism—redeeming the trite globalisms that distract us from true universals.”

the International Journal of the Platonic Tradition

“Richard Sorabji offers us a way to think about Gandhi’s nonviolence in a philosophically complex way that also places the Mahatma in a much broader historical canvas, one that includes not only Stoicism and ancient philosophy in general, but also early Christianity and its ‘recovery’ by the Mahatma’s correspondent, Tolstoy. The dialogue that Gandhi and the Stoics creates between these great and otherwise disconnected movements provides an immense pleasure to the reader. Suddenly we are able to exit the narrow compass of Indian nationalism, within which Gandhi tends to be squeezed by academics, and consider his career from a number of fresh perspectives.”

“The book is an important and distinctive contribution to the history of ideas and to Gandhian studies.”

“By looking at Gandhi from an unusual comparative perspective, Sorabji skillfully highlights several unexplored aspects and perplexities of Gandhi’s moral thought. His book makes a truly original contribution to the growing philosophical literature on Gandhi.”

“By juxtaposing Gandhi’s thought with that of the Stoics, Richard Sorabji not only provides important insights into these thinkers but also sheds new light on the philosophical questions of emotional detachment, non-violence, universal love, and unique personal duties. Indeed, this book presents a compelling case for why these often neglected themes deserve the attention of contemporary moral philosophy. Sorabji discusses these questions in a manner that is philosophically provocative, personally compelling, historically interesting, and yet accessible to a broad audience. Gandhi and the Stoics is a book from which all who read it will learn a great deal. Its spirit of interdisciplinarity and comparative analysis is commendable, as is the grace with which it is written.”

1. Emotional detachment: how to square it with love of family and all humans in the Stoics and Gandhi
2. Emotional detachment: how to square it with politics in the Stoics and Gandhi
3. Gandhi’s individual freedom, and Isaiah Berlin on Zeno’s—sour grapes?
4. Nonviolence as universal love: origins and Gandhi’s supplements to Tolstoy—dilemmas, successes, and failures
5. From universal love to human rights?
6. Persona and svadharma: is duty universalizable or unique to the individual?
7. Hesitations about general rules in morality
8. Moral conscience
9. Restrictions on private property in Gandhi, Christianity, Plato, and the Stoics
10. Isaiah Berlin’s Stoic revolution: depoliticization
11. Gandhi’s philosophical credentials, his lapses, and his distance from other philosophers