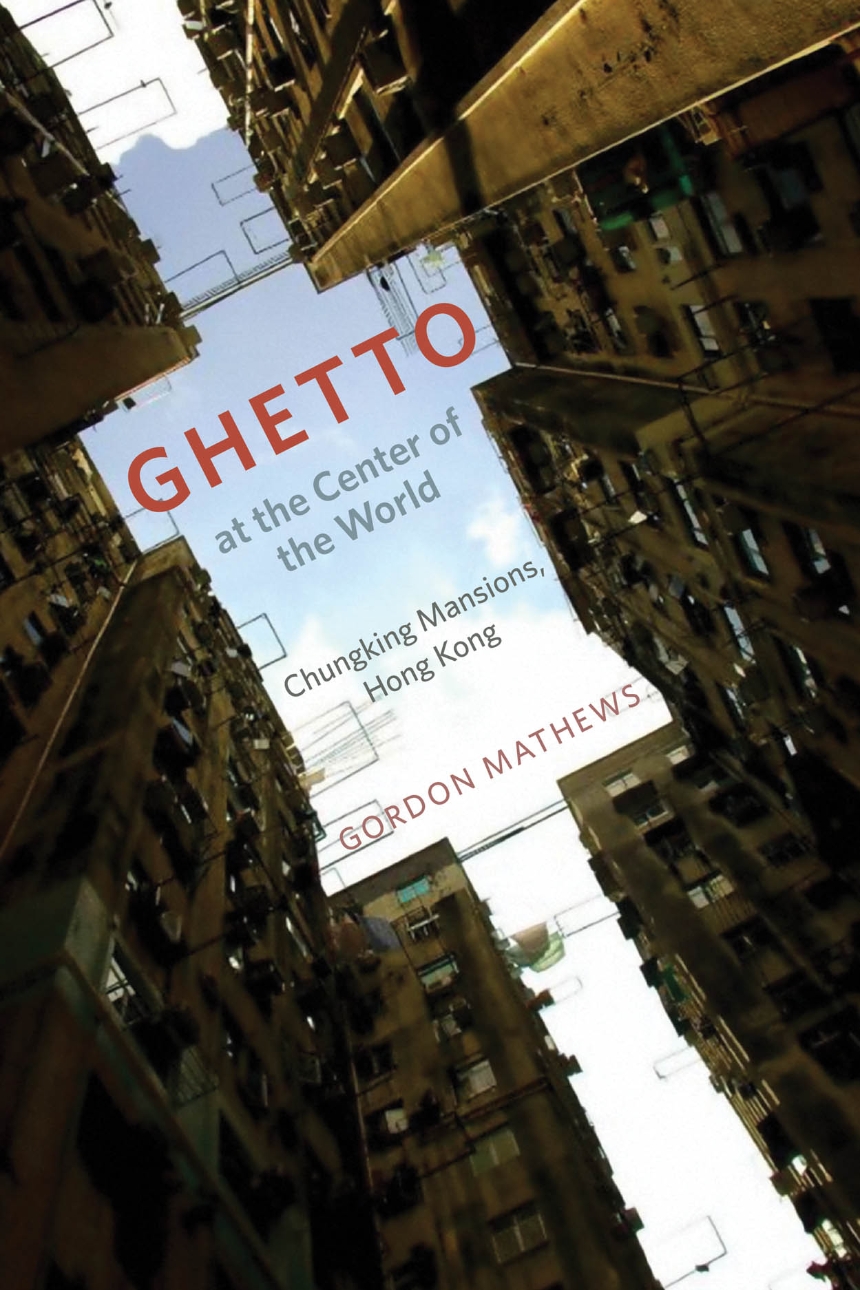 Ghetto at the Center of the World

Ghetto at the Center of the World

There is nowhere else in the world quite like Chungking Mansions, a dilapidated seventeen-story commercial and residential structure in the heart of Hong Kong’s tourist district. A remarkably motley group of people call the building home; Pakistani phone stall operators, Chinese guesthouse workers, Nepalese heroin addicts, Indonesian sex workers, and traders and asylum seekers from all over Asia and Africa live and work there—even backpacking tourists rent rooms. In short, it is possibly the most globalized spot on the planet.

But as Ghetto at the Center of the World shows us, a trip to Chungking Mansions reveals a far less glamorous side of globalization. A world away from the gleaming headquarters of multinational corporations, Chungking Mansions is emblematic of the way globalization actually works for most of the world’s people. Gordon Mathews’s intimate portrayal of the building’s polyethnic residents lays bare their intricate connections to the international circulation of goods, money, and ideas. We come to understand the day-to-day realities of globalization through the stories of entrepreneurs from Africa carting cell phones in their luggage to sell back home and temporary workers from South Asia struggling to earn money to bring to their families. And we see that this so-called ghetto—which inspires fear in many of Hong Kong’s other residents, despite its low crime rate—is not a place of darkness and desperation but a beacon of hope.

Gordon Mathews’s compendium of riveting stories enthralls and instructs in equal measure, making Ghetto at the Center of the World not just a fascinating tour of a singular place but also a peek into the future of life on our shrinking planet.

“Hong Kong’s Chungking Mansions is the most notorious flophouse in Asia. . . . The shabby tenement is today as much about global commerce as tourism. What the building should be renowned for, argues Gordon Mathews in his fluid and enjoyable field study Ghetto at the Center of the World, is the ingenious way ‘low-end globalists’ eke out profits from petit arbitrage. . . . It reads like a first-rate business book.”

“In this wonderful book Gordon Mathews takes on an intriguing project: daily life as it is lived, articulated, dreamed, denied, regretted, and defended in a rather rundown but very public building in Hong Kong. The residents of Chungking Mansions are economically blocked from the rest of the city and often racially discriminated against, so how do such marginalized people survive, much less prosper? This is the conundrum at the heart of Ghetto at the Center of the World. Mathews tackles it by providing a vivid description of the people who live their lives in the building’s dimly lit hallways, restaurants, and shops, and by analyzing the larger material and political forces at work. The resulting account is as informative and revealing as it is entertaining.”

William Jankowiak, author of Sex, Death, and Hierarchy in a Chinese City

“Ghetto at the Center of the World is an important book, for a number of reasons….the accounts Mathews provides are captivating, his argument is sophisticated and provocative but never unnecessarily complex, and, while the book is clearly in conversation with existing anthropological literature, this engagement is subtle.”

“This then is a book not just for the China specialist or the observer of Hong Kong’s minorities, but for all those interested in the human impact of the vagaries of the geo-economics of the 21st century.”

Gregory B. Lee | The China Quarterly

“In arguing that Chungking Mansions might be the most globalized building in the world, [Gordon Mathews] also exposes a critical typology, commonly overlooked, of transient real estate spaces and critical hubs of international activity. Ghetto at the Center of the World explains not only how such a building is part of complex processes of cultural hybridization, but also that the flexibility of such buildings is key to facilitating the transactions that sustain a large part of global economies.”