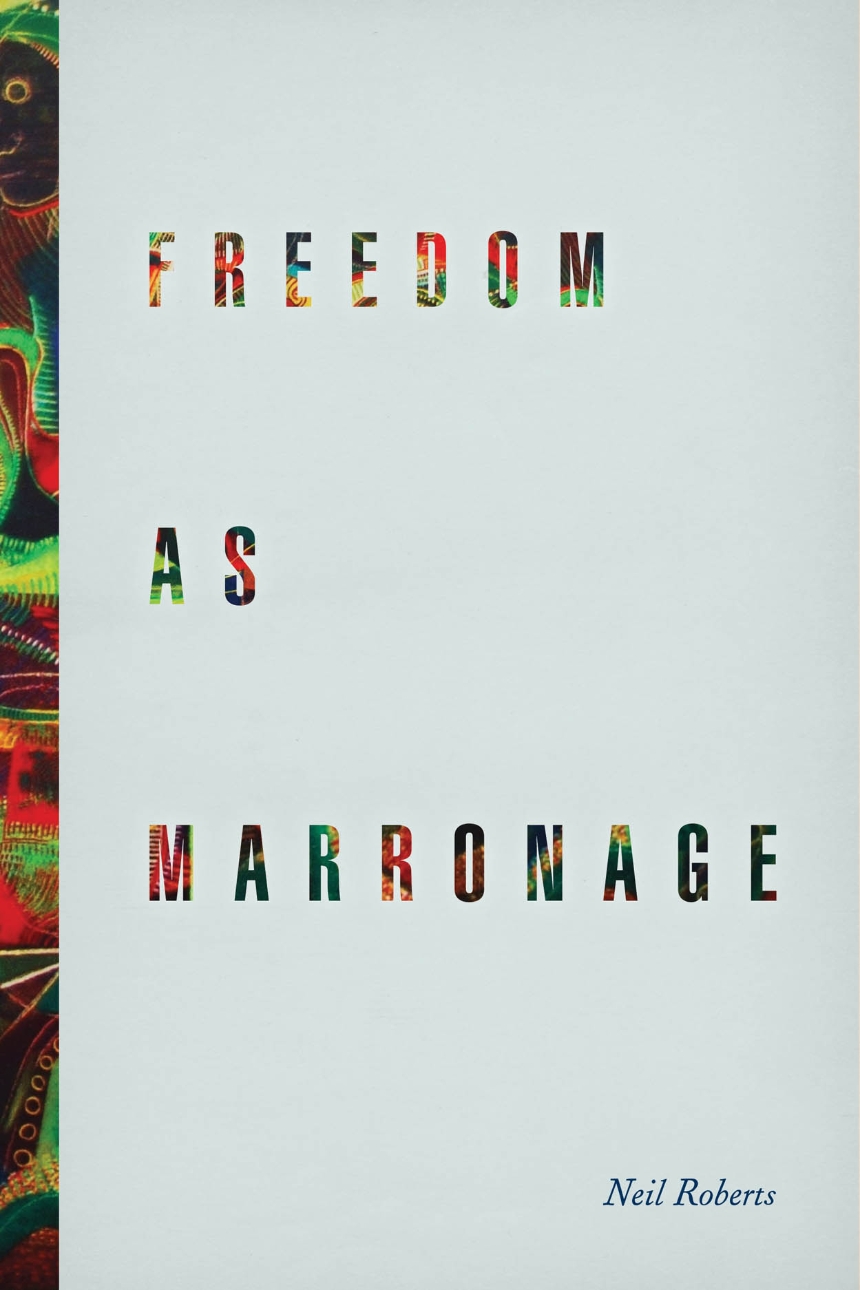 What is the opposite of freedom? In Freedom as Marronage, Neil Roberts answers this question with definitive force: slavery, and from there he unveils powerful new insights on the human condition as it has been understood between these poles. Crucial to his investigation is the concept of marronage—a form of slave escape that was an important aspect of Caribbean and Latin American slave systems. Examining this overlooked phenomenon—one of action from slavery and toward freedom—he deepens our understanding of freedom itself and the origin of our political ideals.

Roberts examines the liminal and transitional space of slave escape in order to develop a theory of freedom as marronage, which contends that freedom is fundamentally located within this space—that it is a form of perpetual flight. He engages a stunning variety of writers, including Hannah Arendt, W. E. B. Du Bois, Angela Davis, Frederick Douglass, Samuel Taylor Coleridge, and the Rastafari, among others, to develop a compelling lens through which to interpret the quandaries of slavery, freedom, and politics that still confront us today. The result is a sophisticated, interdisciplinary work that unsettles the ways we think about freedom by always casting it in the light of its critical opposite.

“Blazing a path through critical discussions of republican theory, the writings of Frederick Douglass and Edouard Glissant, the Haitian Revolution, and Rastafari, Freedom as Marronage confronts readers with a deceivingly simple question: how does a person become ‘free’? Freedom, Neil Roberts answers, cannot be understood without considering the dominant term that opposes freedom in political modernity: slavery. However, instead of treating these as opposite conditions and states of being—or rather, more strictly speaking, as Roberts posits following Frantz Fanon, as a state of being opposed to a zone of nonbeing—Freedom as Marronage shows that freedom emerges in enslaved persons’ escape from and active negation of slavery. . . . Consequently, despite the infamous and widely cited consignment of slaves to what Orlando Patterson called a condition of ‘social death,’ Roberts insists that enslaved persons do not in fact lack agency. In and by marronage, a formerly enslaved person, whether alone or together with others, asserts herself as an agent capable of altering the circumstances and political relations that condition her being. The emphasis on slave agency constitutes an important intervention in political theory at this moment, just after the sesquicentennial of the Emancipation Proclamation, which is still widely understood as having ‘freed’—juridically, from above—many (but not all) slaves in the United States. . . . Certainly, Freedom as Marronage proves that Roberts does not write in a tentative voice but always takes his stances boldly.”

“Freedom as Marronage is a welcome addition to a growing body of work that is challenging Western political theory and Western political philosophy from the perspective of a decolonial agenda. . . . One of the most valuable features of this book is its self-conscious and explicit drawing on the black slave and post-slave experience—New World African enslavement, marronage of different varieties, the Haitian slave revolution, post-emancipation racial oppression in conditions of nominal freedom—as a resource for political theory. By taking this subaltern history as his archive—‘dread history’ in the coinage of the Jamaican Rastafari—Roberts demonstrates what rich political raw materials lie waiting for the theorist with the courage to stray beyond the bounds of the Western estate.”

Journal of French and Francophone Philosophy

“Freedom as Marronage holds up the incisive modes of critique of the Black Radical Tradition: works like Cedric Robinson’s Black Marxism: The Making of the Black Radical Tradition or Walter Rodney’s How Europe Underdeveloped Africa, while also appealing to, even destabilizing, the conventions of more traditional political science theory. Whether or not the rigid functionalist tenants of American political science are able to hear the radical theories of freedom raised by black maroon history remains uncertain, but to be sure the foundations of such a stogy pragmatist discourse will have been shaken by the publication of Freedom as Marronage.”

"Neil Roberts’s ambitious and timely intervention argues that political freedom must be thought in relation to the existence and experience of slavery. His bold call to understand “freedom as marronage” is also motivated by the important project of “creolizing political theory” by grounding it in black historical experience and paying close attention to how black thinkers have reflected on that experience."

“Freedom is a keyword in modern political thought and culture. Yet, as Roberts convincingly shows, modern political thinkers tend to analyze the concept using the freedoms of the powerful and the privileged to inform their conceptual frames. His wager, which pays off spectacularly, is that readers can gain fresh insights by starting with the history of resistance to slavery. He calls this new conception of freedom  ‘freedom as marronage.’ Roberts’s book is not merely an ideology critique that shows how dominant conceptions of freedom exclude the experiences of subordinate others. Rather, it is a detailed and nuanced exploration of the kinds of flight from slavery, their nature, and their limits. The result is a unique contribution to contemporary political thought: the idea of freedom as an ever-shifting process occurring in the liminal space of the slave escape. . . . Freedom as Marronage is clearly written and expertly researched. It is essential reading for those interested in the history of slavery, the concept of freedom, and critical theory. . . . Essential.”

“Freedom as Marronage is an exciting, well-conceived, and passionately argued work of political theory and Africana thought. Roberts’s distinctive understanding of freedom is especially welcome in the context of political theory and philosophy, where slavery still appears largely (if at all) as either a metaphor or a signpost of moral and political progress. As he shows, thinking through the legacies of enslavement and the flight from it is essential to understanding freedom in a postcolonial, post-apartheid, post-civil rights moment.”

“In Freedom as Marronage, Roberts insists that a new theory of freedom emerges from the Haitian Revolution, but each instance of formulating this new thought seems to demonstrate, instead, a more rigorousapplication of the tenets of freedom and fraternity in the French Revolution. Where there is a difference is through dynamics of creolization, of African, European, and indigenous American conceptions of legitimating practices in the struggle for freedom. That the Black slaves chose, for example, the Native American name for the island as the one for their republic is a case in point. Roberts responds to and builds on these criticisms through theoretical reflection on the concept of marronage, whose etymology points to the sea, to what it means to be lost at sea from one perspective, stuck on an island in another. It refers to the consciousness of enslaved Africans in the Caribbean, whose hopes to return to Africa (home) were challenged by the sea in every direction. Roberts shows how, in such modern isolation on the one hand and the constant, brutal realities of slavery on the other, the enslaved’s conceptions of freedom were affected; would, for example, being marooned, being ‘stranded,’ lead to a form of stoic resignation as the formulation of freedom or more active forms of resistance, what the revolutionary psychiatrist, political theorist, and philosopher Frantz Fanon refers to as becoming ‘actional’? Roberts works through Hannah Arendt, Phillip Petit, Jean-Jacques Rousseau, and Frederick Douglass in a debate over such topics as the impact of racialized slavery on conceptions of freedom to problems with the dialectics of recognition as the basis of securing freedom and dignity for the self.  Particularly powerful is Roberts’s discussion of Coleridge’s impact on Douglass’s thought. Roberts reveals, in Coleridge, a profound existential commitment against bondage and an understanding of freedom that transcends mere liberty. This book, then, is an exemplar of the creolization of theory, of theory from the global south reaching beyond the institutional location of its author in northern provinces, to articulate freedom and the quest for human dignity beyond the confines of Euromodernity to the heart and soul of a human world in need of learning much from its always present dark side. It’s a splendid addition to the bourgeoning movement of creative political thought from Afro-modernity and beyond. A must read for those interested in knowing, proverbially, otherwise.”

“Could there be a topic in Western political theory as thoroughly analyzed—indeed as exhausted—as freedom? But it all depends on whose liberties have been framing your conceptual investigation. Taking up the perspective of the ‘dread history’ of Afro-modernity—a history of slavery, revolt, and marronage—Roberts opens up for us an exciting new conceptual terrain unexplored by the hegemonic Euro-narrative. In the process, he makes irrefutably clear the extent to which modern Western political theory has been constructed on the silencing of the voices of resistance of the West’s subordinated racial Others.”

“Freedom as Marronage is not only an illuminating exegesis on the self-activity of enslaved people to create free space for living but an utterly brilliant meditation on the fundamental meaning of freedom in the modern world. Political theorists, historians, philosophers, and cultural critics take heed: Roberts is a thinker to be reckoned with.”

"Roberts offers a new and exciting analysis of the relationship of slavery to freedom. He reviews the extant literature to reject the idea that slavery and freedom are inherently inert conditions enjoyed separate and apart from the other. Roberts finds that the well renowned historian John Hope Franklin, as well as the respected fathers of modern philosophy such as Hobbs, Berlin and Kant, all viewed slavery and freedom as inertia since they ignore flight in their theories on slavery and slave agency. . . . Roberts’ ideas on how the lived experience of marronage achieved political freedom are both new and refreshing. He does a superb job discussing how it was a non-sovereign imaginary of freedom that moved more than a half million African slaves to take flight from slavery and begin the business of building a new polity known as the nation of Haiti. In the words of Neil Roberts, the masses of Haiti dared to be free by themselves and for themselves."

Part I: On Slavery, Agency, and Freedom

One / The Disavowal of Slave Agency

Two / Comparative Freedom and the Flight from Slavery

Three / Sovereign Marronage and Its Others

Five / Marronage between Past and Future