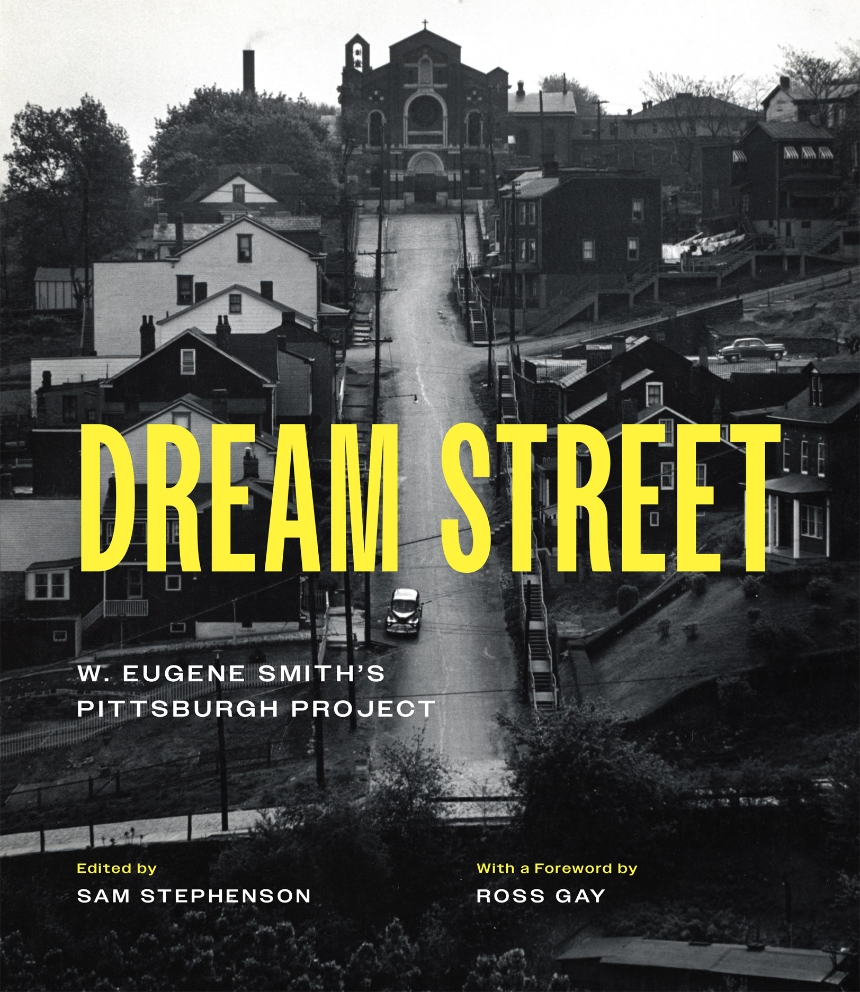 In 1955, having just resigned from his high-profile but stormy career with Life Magazine, W. Eugene Smith was commissioned to spend three weeks in Pittsburgh and produce one hundred photographs for noted journalist and author Stefan Lorant’s book commemorating the city’s bicentennial. Smith ended up staying a year, compiling twenty thousand images for what would be the most ambitious photographic essay of his life. But only a fragment of this work was ever seen, despite Smith's lifelong conviction that it was his greatest collection of photographs.

In 2001, Sam Stephenson published for the first time an assemblage of the core images from this project, selections that Smith asserted were the “synthesis of the whole,” presenting not only a portrayal of Pittsburgh but of postwar America. This new edition, updated with a foreword by the poet Ross Gay, offers a fresh vision of Smith's masterpiece.

“[Dream Street] is Smith’s attempt to record the paradoxes of city life in America—the clutch of industry, the dogged persistence of both community and loneliness, the forces of love, hate, growth and decay. Not even the venerated master of photojournalists could quite pull this off, but Smith’s obsessiveness was harnessed to an enormous talent, and he wasn’t far from the mark when he wrote that [this work] would ‘create history.’"

Vicki Goldberg | The New York Times, on the original edition

“Inspired by Joyce and Faulkner, Smith envisioned a symphonic, multilayered photo essay portraying the entire city; his failure to complete it haunted him for the rest of his life. Here are more than a hundred and fifty of his nourish and oddly poignant images: gleaming railyards at night; buildings wrapped in clouds of industrial smoke; the face of a steelworker, the Bessemer fires reflected in his safety goggles.”

New Yorker, on the original edition

“These images are about the life that never gets into headlines. When a young teenage girl waits alone by a gleaming black car, she embodies innocence . . . and loss. When men of all ages from sixteen to sixty stand in silhouette along the lit-up counter of a takeout stand, you see a story of age, and ambition denied, a side of the 1950’s that rarely shows up on nostalgia channels. . . . Smith’s Pittsburgh photographs show how much we still resemble those citizens in the summer of 1955. And in his majestic inability to admit defeat we can see how dangerous that confidence could be to a man who saw its limits, and refused to give in.”

“Smith imagined a visual collage to rival Finnegan’s Wake in scope and intensity. His astonishing ambition was . . . his Faustian pact with the city . . . . There are no touching displays of picturesque individuality, just a city aesthetically dissected; an effort to ‘get to the guts of the matter and show the bastards as they are.’”

TIME OUT London, on the original edition

“Smith’s presence haunts this book, even a quarter century after his death.”

“Every picture tells a story—but put them all together and you might get Finnegans Wake. In the grand canyons of Pittsburgh, monolithic steel mills overshadow humble spires; hillsides scored with 500-step staircases plunge down to inky pitmouths. By day, the steelworkers hover like ghosts, silhouetted in the furnace flames. By night, the moon shines down Stygian rivers, as the shining railroad snakes away into blackest suburbs. More Dante than Joyce, this is a magnificent vision of light and dark.”

Evening Standard, on the original edition

“Dream Street is a diffuse portrait of a community that still led the world in steel production while grappling with the challenge of making the air breathable. It’s also a time machine that takes those who weren’t alive or around during those years to the moment the soul of modern Pittsburgh was forged. Much like its creator, [Dream Street] is without sentiment. It is clear-eyed, despite the smoke of the coke works, and devoid of pretense. It is full of revelation and surprises. It inspires in a way that only great art—and great themes—are capable of inspiring.”

Pittsburgh Post-Gazette, on the original edition

“These dark-toned photographs are dense with meaning. And in [Dream Street] they are given the space to do it. Smith’s best pictures are complete, complicated worlds. The bigness, in every sense, of Smith’s pictures was also the bigness of Pittsburgh.”

Sarah Boxer | The New York Times, on the original edition

“The range of this project lies not only in its subjects and themes, but also its pictorial and compositional variety, and its strategies and ploys. In other words, Smith used every device and trick he knew, and he knew a lot. The Pittsburgh project found Smith at the height of his abilities, which he brought to bear with vast ambition. Aiming to capture such a cross-section of society, neighborhoods, cityscapes, moods, and feelings, it remains unrivaled in this breadth and depth of its scope. Fifty years later, it jumps out at us, and the nostalgia suffusing [the book] is not just for the past depicted and our assumptions about it . . . but also for a time when a photographer could be so engaged with the real world, and yet so introspective about Americanness, and so secure in the belief that images would elevate the viewer. What Smith accomplished here is shaped not only by his personal ambition, but also by photographers’ ambitions for photography, and Americans’ ambitions for America.”

Photo Review, on the original edition

“This epic portrait of Pittsburgh has become legendary in the history of photography. . . . Viewed together in this compelling, commanding publication, Smith’s photographs present energetic images of hope and despair, rebuilding and decay, poverty and affluence, and solitude and togetherness. . . . These images of mid-century, post-war Pittsburgh powerfully resonate with America today.”

B&W: Black & White Magazine for Collectors of Fine Photography, on the original edition

“Dream Street stands as a final reminder of the power of Smith’s poetic vision.”

The Cleveland Plain Dealer, on the original edition

“The Pittsburgh photographs were Smith’s after-LIFE magnum opus, and with them he produced a darkly urban vision, less out of a magazine than out of film noir . . . the paradoxes of a city churning toward progress and leaving vast segments of its population in squalor [are] metaphors for Smith’s state of mind. . . . What Smith was after was not a series of punchy vignettes but a sprawling epic in the manner of his favorite music: Beethoven’s late string quartets and the rhapsodic improvisations of John Coltrane.”

“Dream Street allows us to assess Smith’s greatest achievement; an extensive, complex, and utterly engaging photo-essay, each element of which has genuine bite. From the skyline to the assembly line, steel workers to city council members, and men on the picket line to children at play, Smith captures the ambitions and inequities of an American city at mid-century with extraordinary deftness and wit.”

Vincent Aletti | The Village Voice, on the original edition