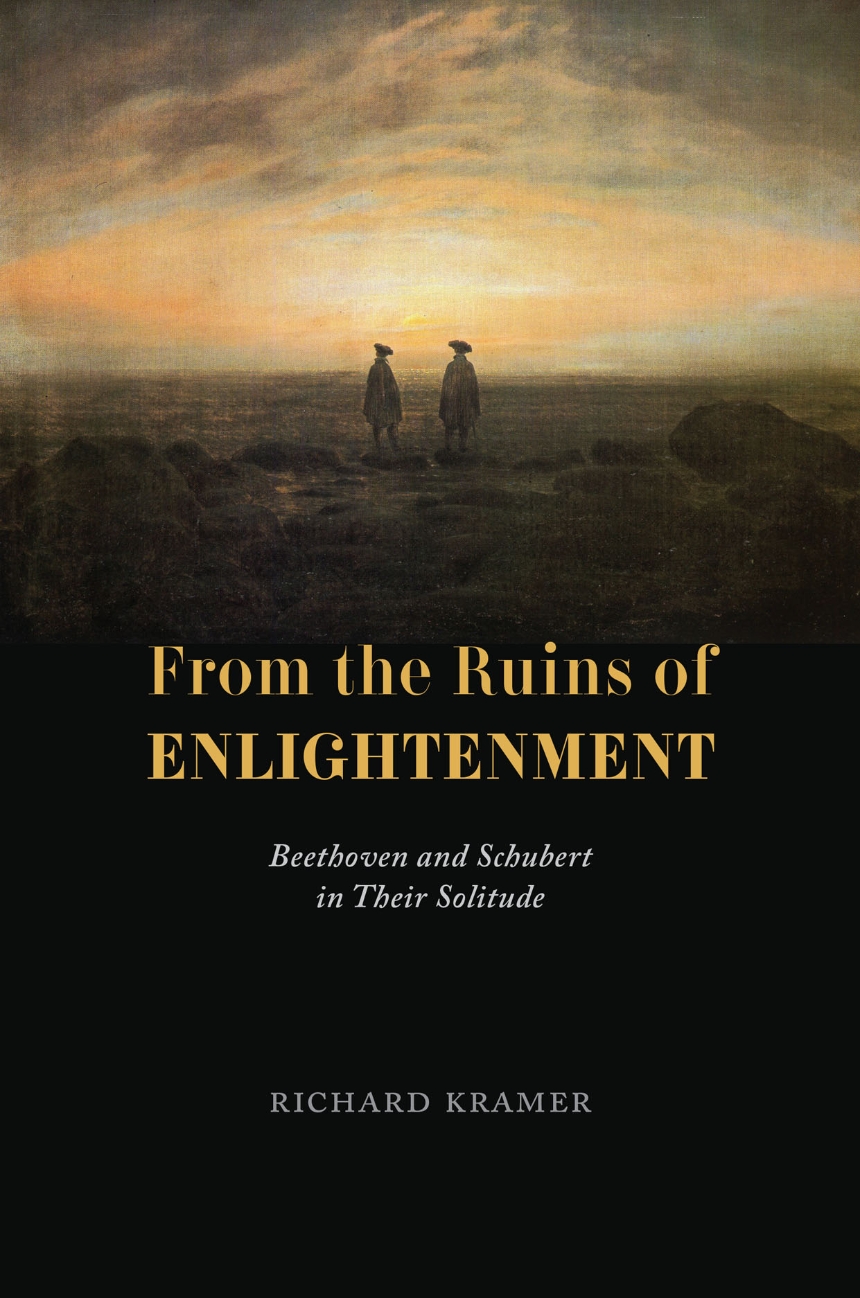 From the Ruins of Enlightenment

Beethoven and Schubert in Their Solitude

From the Ruins of Enlightenment

Beethoven and Schubert in Their Solitude

Richard Kramer follows the work of Beethoven and Schubert from 1815 through to the final months of their lives, when each were increasingly absorbed in iconic projects that would soon enough inspire notions of “late style.”

Here is Vienna, hosting a congress in 1815 that would redraw national boundaries and reconfigure the European community for a full century. A snapshot captures two of its citizens, each seemingly oblivious to this momentous political environment: Franz Schubert, not yet twenty years old and in the midst of his most prolific year—some 140 songs, four operas, and much else; and Ludwig van Beethoven, struggling through a midlife crisis that would yield the song cycle An die ferne Geliebte, two strikingly original cello sonatas, and the two formidable sonatas for the “Hammerklavier,” opp. 101 and 106. In Richard Kramer’s compelling reading, each seemed to be composing “against”—Beethoven, against the Enlightenment; Schubert, against the looming presence of the older composer even as his own musical imagination took full flight.

From the Ruins of Enlightenment begins in 1815, with the discovery of two unique projects: Schubert’s settings of the poems of Ludwig Hölty in a fragmentary cycle and Beethoven’s engagement with a half dozen poems by Johann Gottfried Herder. From there, Kramer unearths previously undetected resonances and associations, illuminating the two composers in their “lonely and singular journeys” through the “rich solitude of their music.”

“Kramer places the works he discusses within revelatory new cultural contexts; as ever, he writes analysis which speaks to the performer.”

Ian Bostridge, author of 'Song and Self: A Singer's Reflections on Music and Performance'

“From the Ruins of Enlightenment is a beautifully written, original analysis of many of the best known, most often discussed and performed works of two central composers, Beethoven and Schubert. As has been the case in Kramer’s work throughout his career, this is an exceedingly musical study, one which promises to change the way we hear the works he discusses. Kramer is a sensitive reader of poetry and an insightful analyst of how composers interpreted the texts they set.”

“Kramer is one of the world’s most important critics on music and aesthetics of the late eighteenth and early nineteenth centuries. He is a giant figure in Schubert studies. Unafraid to be controversial, he always writes with stringency, shrewd discrimination, and verve. What is distinctive about Kramer’s venture into a topic that has occasioned a wealth of contending interventions is its peerless mastery of Beethoven’s and Schubert’s compositional approaches. From the Ruins of Enlightenment is unique in its range, scholarly ambition, and intellectual vigor.”

“Drawing heavily on the composers’ sketches, drafts, manuscripts, notebooks, contemporary sources, and his own performance experience, Kramer demonstrates an acute ear, an analytical mind, and reasoned opinions. . . . Readers will feel as if they are looking over the shoulders of these musical titans as they create stunning work.”

In the Silence of the Poem
Chapter 1. Hölty’s Nightingales, and Schubert’s
Chapter 2. Herder’s Hexameters, and Beethoven’s
Chapter 3. Whose Meeres Stille?

Toward a Poetics of Fugue
Chapter 4. Gradus ad Parnassum: Beethoven, Schubert, and the Romance of Counterpoint
Chapter 5. Con alcune licenze: On the Largo before the Fugue in Op. 106

Sonata and the Claims of Narrative
Beethoven
Chapter 6. On a Challenging Moment in the Sonata for Pianoforte and Violoncello, Op. 102, No. 2
Schubert
Chapter 7. Against the Grain: The Sonata in G (D 894) and a Hermeneutics of Late Style