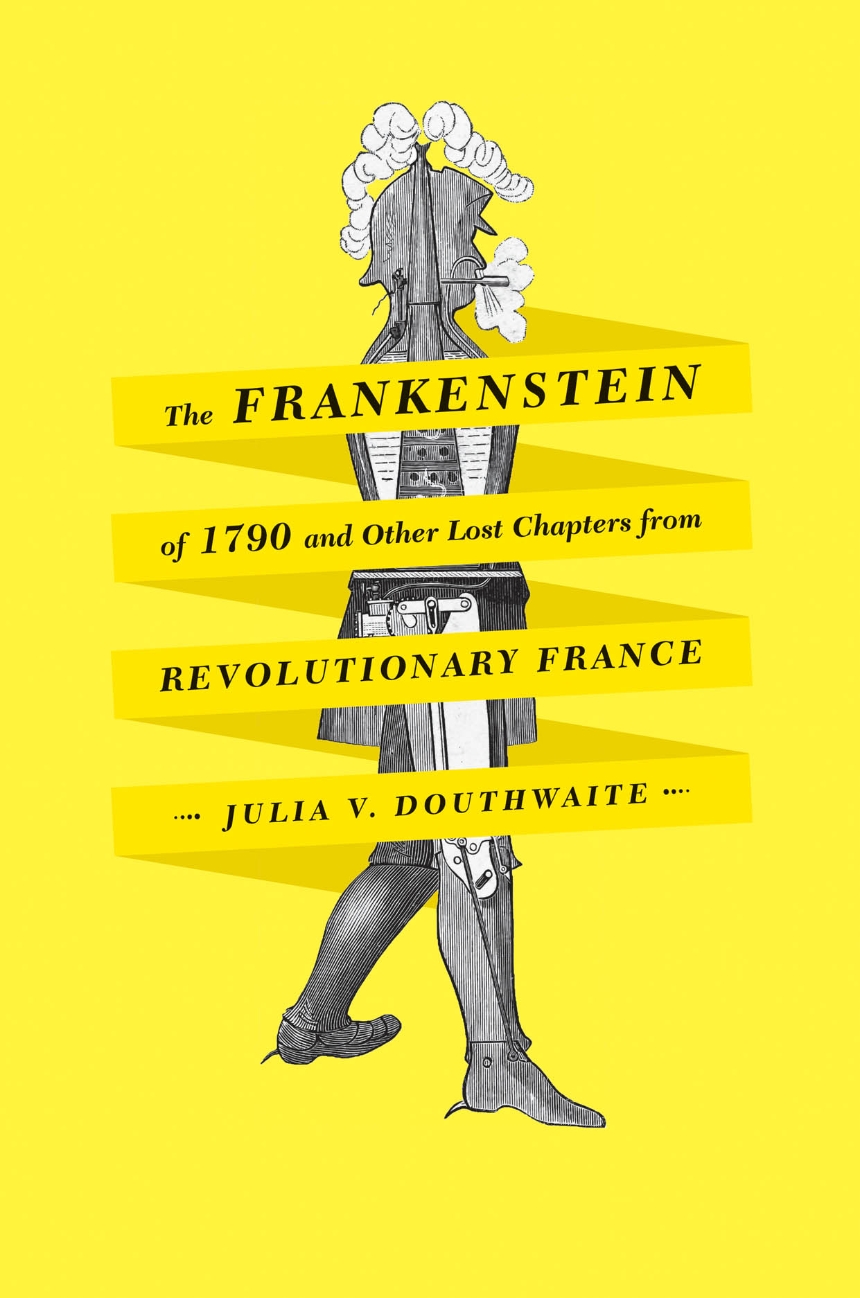 The Frankenstein of 1790 and Other Lost Chapters from Revolutionary France

The Frankenstein of 1790 and Other Lost Chapters from Revolutionary France

The French Revolution brings to mind violent mobs, the guillotine, and Madame Defarge, but it was also a publishing revolution: more than 1,200 novels were published between 1789 and 1804, when Napoleon declared the Revolution at an end. In this book, Julia V. Douthwaite explores how the works within this enormous corpus announced the new shapes of literature to come and reveals that vestiges of these stories can be found in novels by the likes of Mary Shelley, E. T. A. Hoffmann, Honoré de Balzac, Charles Dickens, Gustave Flaubert, and L. Frank Baum.
Deploying political history, archival research, and textual analysis with eye-opening results, Douthwaite focuses on five major events between 1789 and 1794—first in newspapers, then in fiction—and shows how the symbolic stories generated by Louis XVI, Robespierre, the market women who stormed Versailles, and others were transformed into new tales with ongoing appeal. She uncovers a 1790 story of an automaton-builder named Frankénsteïn, links Baum to the suffrage campaign going back to 1789, and discovers a royalist anthem’s power to undo Balzac’s Père Goriot. Bringing to light the missing links between the ancien régime and modernity, The Frankenstein of 1790 and Other Lost Chapters from Revolutionary France is an ambitious account of a remarkable politico-literary moment and its aftermath.

“Julia V. Douthwaite succeeds admirably in showing the interrelations between history and literature and introduces the reader to a long-neglected body of works. By showing the role of Revolutionary fiction and its reinterpretation by later writers, this important book fills a significant gap in the history of literature.”

“In this meticulously researched, carefully argued, and beautifully written book, Professor Douthwaite shows us why we should care about the neglected literature that came out of France from the fall of the Bastille to Napoleon’s coronation. Whereas most scholars of the French Revolution focus on its origins or course, Douthwaite concentrates on its consequences, locating its imprint on literature and culture from the early nineteenth century to our own day. Her skillful use of archival sources as well as printed texts and images, combined with her trenchant historiographical interventions and brilliant contextual readings, make The Frankenstein of 1790 a model of interdisciplinary scholarship.”

“This book offers eye-opening revelations about French fiction in the Revolutionary period, not least the rediscovery of a parable about an inventor named Frankenstein and his life-size artificial man, published more than a quarter century before Mary Shelley’s famous novel. Moreover, in a series of inspired chapter codas, Douthwaite shows the subsequent importance for literary history—both in France and in England—of the now-neglected 1790s novels on which she focuses. The Frankenstein of 1790 will be of enormous interest to any student of the French Revolution’s literary legacies.”

“This book addresses an important issue. If the facts of history are hijacked by contemporary partisan forces, then history is not only written with hindsight by the winners and survivors, but is also orchestrated by contemporary propaganda. Douthwaite’s conclusion is a thoughtful reflection on the long arm of the French Revolution.”

“Douthwaite’s thoughtful interdisciplinary approach emphasizes the political contexts and implications of literature while avoiding reductive readings and instead demonstrating the intriguing multiplicity and ambiguity of political meanings that can be attached to even a single image representing a single event. . . . This diversity of source material, from the archives to the internet, as well as Douthwaite’s engaging style, opens the book to a wide readership, from specialists of the French Revolution and of its literature to non-scholars interested in the interactions between history, literature and politics. . . . An enjoyable read.”

“What is novel about Douthwaite’s approach is the way she uncovers vivid, but little known fictional evocations of revolutionary characters and events and points to the way these fictions ‘prompted later writers to retell the same stories.’”

“If most evocative when examining the ebb and legacy of the French Revolution, Douthwaite’s exploration of the entire decade illuminates the scope of its literary efflorescence and how much its stories have yet to tell us.”

“[A] highly nuanced accounting of the four ‘lost chapters’ of Revolutionary France....Douthwaite categorizes her approach as belonging to the ‘new positivism’ of critics such as Stanley Fish, that is, as reflecting the view that one must posit a literal meaning for a text while simultaneously accepting that this ‘literal’ meaning is subject to change over time. It is in tracing the changes to a number of original narratives born out of the upheaval of the French Revolution that Douthwaite makes her mark with this meticulously researched book.”

New Perspectives on the Eighteenth Century

"Demonstrates—with deft humor as well as political seriousness—that the contradictions and potential inherent in the revolutionary spirit are with us still."

"A deft combination of the resources of historical and literary scholarship. . . . Douthwaite’s prose is engaging, and despite the astonishing volume of the material she investigates, her engagement with it resists generalization, offering close readings of intricate details. . . . One of the pleasures of the book is the way that it humanizes historical study."

“Douthwaite handles confidently a vast range of material from Revolutionary newspapers, pamphlets, novels, memoires, prints, and film. She is equally at ease analysing Nogaret, Guénard, and Regnault-Warin as she is with Hoffmann, L. Frank Baum, Dickens, or Balzac. . . . This refreshing and dazzling presentation of so many hidden gems from the Revolutionary decade will quickly become required reading for all those working at the interface of literature, politics, and culture in the 1790s.”

Chapter One. From Fish Seller to Suffragist: The Women’s March on Versailles

Chapter Two. The Frankenstein of the French Revolution

Chapter Three. The Once and Only Pitiful King

In Guise of a Conclusion

On the Republican Calendar and Dates