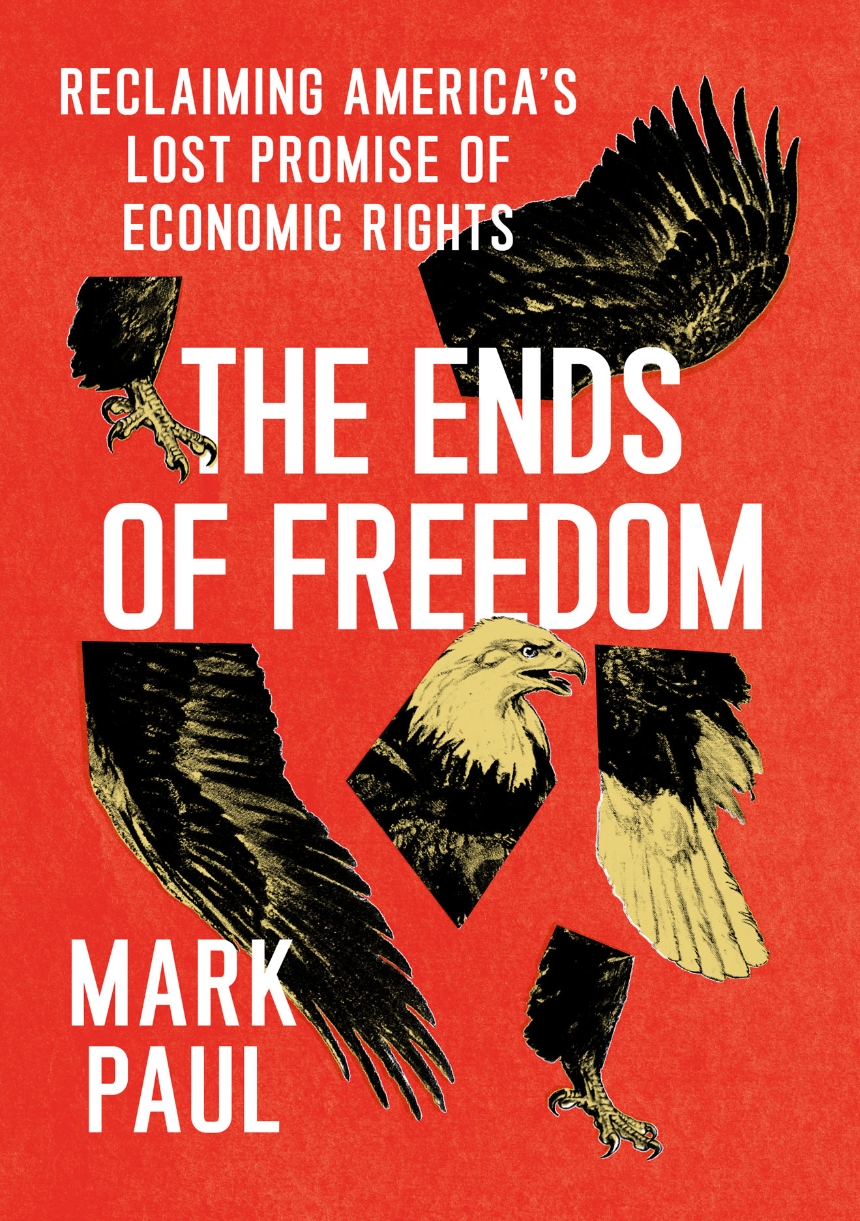 The Ends of Freedom

The Ends of Freedom

An urgent and galvanizing argument for an Economic Bill of Rights—and its potential to confer true freedom on all Americans.

Since the Founding, Americans have debated the true meaning of freedom. For some, freedom meant the provision of life’s necessities, those basic conditions for the “pursuit of happiness.” For others, freedom meant the civil and political rights enumerated in the Bill of Rights and unfettered access to the marketplace—nothing more.  As Mark Paul explains, the latter interpretation—thanks in large part to a particularly influential cadre of economists—has all but won out among policymakers, with dire repercussions for American society: rampant inequality, endemic poverty, and an economy built to benefit the few at the expense of the many.

In this book, Paul shows how economic rights—rights to necessities like housing, employment, and health care—have been a part of the American conversation since the Revolutionary War and were a cornerstone of both the New Deal and the Civil Rights Movement. Their recuperation, he argues, would at long last make good on the promise of America’s founding documents. By drawing on FDR’s proposed Economic Bill of Rights, Paul outlines a comprehensive policy program to achieve a more capacious and enduring version of American freedom. Among the rights he enumerates are the right to a good job, the right to an education, the right to banking and financial services, and the right to a healthy environment.

Replete with discussions of some of today’s most influential policy ideas—from Medicare for All to a federal job guarantee to the Green New Deal—The Ends of Freedom is a timely and urgent call to reclaim the idea of freedom from its captors on the political right—to ground America’s next era in the country’s progressive history and carve a path toward a more economically dynamic and equitable nation.

"Without a new foundation of economic rights for all, grounded in ecological safety and racial justice, democracy will not survive. Paul is one of the economists reimagining his field to meet this moment of compounding crises, and his new book brilliantly traces the history and irresistible logic behind the demand for an economic bill of rights. It’s a gift to the social movements who are fighting to put those rights back on the political agenda, and to anyone contemplating the deeper meaning of freedom."

This is a fascinating book about a forgotten US intellectual tradition. Paul forcefully shows that there can be no real freedom without substantial and well-guaranteed economic rights for all: the right to education, the right to a job, and the right to housing. A must-read!"

"Paul tells the full story of the nation’s yet-to-be-fulfilled promise of a guarantee of a minimum standard of economic possibility and security for all Americans. As he shows, the principles of an Economic Bill of Rights date, at least, to the founding of the Republic. Not only does Paul give us the most comprehensive treatment of the history of the idea of a social floor for opportunity, but he provides a detailed plan appropriate for the twenty-first century. This is the book that throws down a forceful gauntlet on how, at last, to create an equitable America."

"In highlighting how the notion of economic freedom was hijacked by the right, Paul has put his finger on the missing link in any progressive agenda that purports to work for all Americans. The book connects the various seemingly separate strands of political crisis into one coherent idea: we need to revive a robust vision for economic freedom that centers on racial justice. Building on the core impetus of Roosevelt's Economic Bill of Rights, Paul revives it for the twenty-first century with an expert's understanding of economic trends and gaps in recent policy. This important and thorough account of history and economics will be an excellent resource for policymakers, students, activists, and citizens interested in achieving the promise of democracy."

1. States of America
2. Capitalism and Freedom
3. America’s Other Freedom

Part III: A Budget for the People

In December 2017, Philip Alston, an Australian human rights lawyer and the Special Rapporteur on Extreme Poverty and Human Rights for the United Nations, was commissioned by the UN to take a fact-finding tour of the United States. The purpose of his trip was to determine whether “the persistence of extreme poverty in America undermines the enjoyment of human rights by its citizens.” After a two-week tour that took him through California, Alabama, Georgia, Puerto Rico, West Virginia, and Washington, DC, Alston described what he observed:

“I met with many people barely surviving on Skid Row in Los Angeles, I witnessed a San Francisco police officer telling a group of homeless people to move on but having no answer when asked where they could move to, I heard how thousands of poor people get minor infraction notices which seem to be intentionally designed to quickly explode into unpayable debt, incarceration, and the replenishment of municipal coffers, I saw sewage filled yards in states where governments don’t consider sanitation facilities to be their responsibility, I saw people who had lost all of their teeth because adult dental care is not covered by the vast majority of programs available to the very poor, I heard about soaring death rates and family and community destruction wrought by prescription and other drug addiction, and I met with people in the South of Puerto Rico living next to a mountain of completely unprotected coal ash which rains down upon them bringing illness, disability and death.”

By almost any economic measure, the United States of America is one of the richest nations ever to exist. At the same time, 65 million of its people live near or below the poverty line, struggling to feed, house, and care for themselves on a day-to-day basis. As Alston interviewed the scores of homeless occupying LA’s Skid Row, he was told repeatedly that theirs is a great country: “American exceptionalism was a constant theme in my conversations.” In Alston’s summarizing report, he questioned whether this was still the case: “Instead of realizing its founders’ admirable commitments, today’s United States has proved itself to be exceptional in far more problematic ways that are shockingly at odds with its immense wealth and its founding commitment to human rights. As a result, contrasts between private wealth and public squalor abound.”

Alston also noted that despite its ready “naming and shaming” of other countries that are human rights violators, as well as its ratification of treaties in which human rights to sustenance and shelter are enumerated, the United States does not itself treat such economic and social conditions as rights for its citizens. Rather, the US government remains focused on defending so-called negative rights—freedoms from interventions or suppressions that could induce intimidation, coercion, or even violence.

The causes for this tendency are many, but one is historical. There are no more influential or important documents in the history of negative freedoms than the US Declaration of Independence and the first ten amendments of the US Constitution that followed, otherwise known as the Bill of Rights. When Americans wish to expand the list of places where they might carry a firearm, or marry a partner whom they aren’t legally at liberty to marry, or erect a statue of the Ten Commandments on public property, or terminate a pregnancy, these are the texts they either appeal to or cite.

For Americans, the invocation of freedom, liberty, or rights is typically framed in the classically negative sense of “not being interfered with by others.” But as Alston’s account amply demonstrates, this brand of American freedom proves insufficient when it comes to the destitute and desperate. What is the value of a constitutional prohibition on law abridging free speech to the resident of Skid Row who is without access to a toilet?

What good is the right to vote to the person too sick—or lacking time off from work—to get to the polls? Even the philosopher Isaiah Berlin, the first to distinguish the concept of negative freedom and a great champion of its protections, acknowledged the perversity of its bestowal on those too wretched to avail themselves of it: “To offer political rights, or safeguards against intervention by the state, to men who are half naked, illiterate, underfed, and diseased is to mock their condition.”

Such is the (quite literal) condition of many Americans today. And so it would seem American freedom, at least in its hegemonic form, needs a rethink. In what follows, I offer a comprehensive prescription that aims to address the problem of persistent economic insecurity in America, one based on an expanded notion of American freedom and grounded in an alternative model of economic thought. The United States can eradicate poverty and build an economy that works for everyone—that puts, as the mantra goes, people over profits—by adopting social and economic (“positive”) rights: the right to a well-paying job, the right to health care, the right to an education, the right to a home, and more.