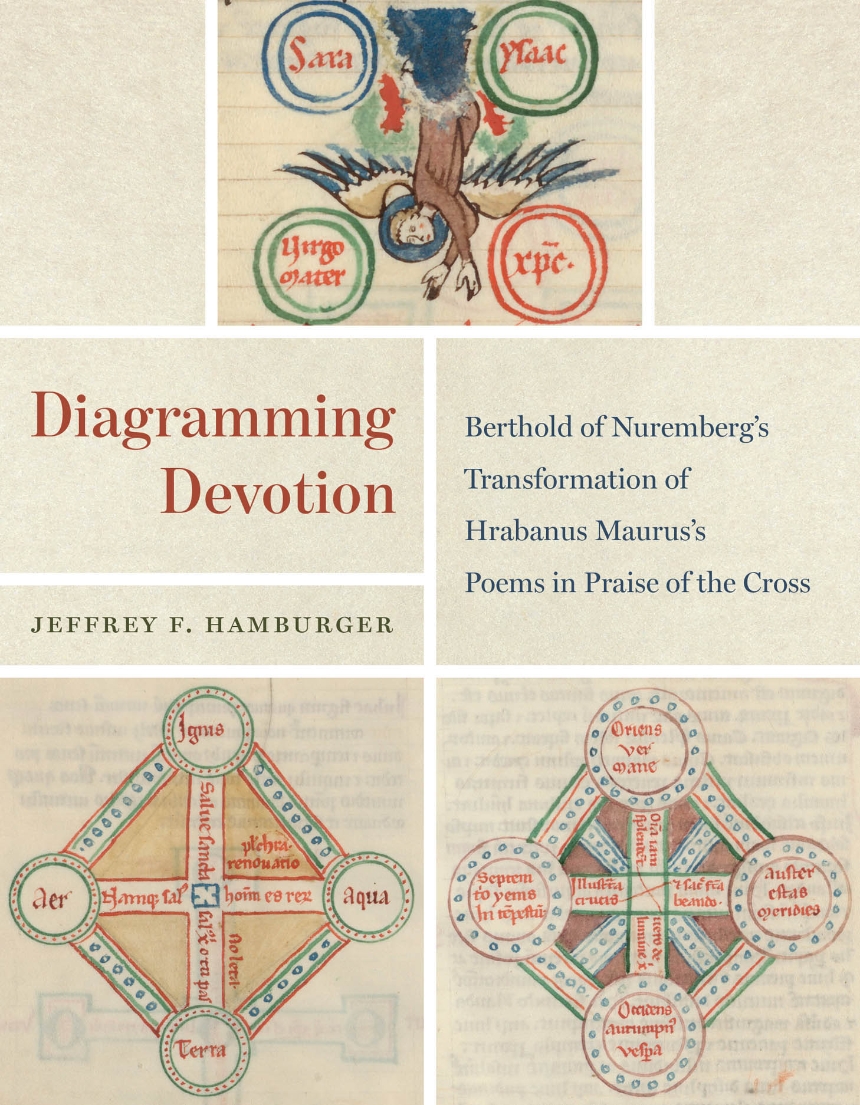 During the European Middle Ages, diagrams provided a critical tool of analysis in cosmological and theological debates. In addition to drawing relationships among diverse areas of human knowledge and experience, diagrams themselves generated such knowledge in the first place. In Diagramming Devotion, Jeffrey F. Hamburger examines two monumental works that are diagrammatic to their core: a famous set of picture poems of unrivaled complexity by the Carolingian monk Hrabanus Maurus, devoted to the praise of the cross, and a virtually unknown commentary on Hrabanus’s work composed almost five hundred years later by the Dominican friar Berthold of Nuremberg. Berthold’s profusely illustrated elaboration of Hrabnus translated his predecessor’s poems into a series of almost one hundred diagrams. By examining Berthold of Nuremberg’s transformation of a Carolingian classic, Hamburger brings modern and medieval visual culture into dialogue, traces important changes in medieval visual culture, and introduces new ways of thinking about diagrams as an enduring visual and conceptual model.

"We owe it to Hamburger's beautiful book Diagramming Devotion. Berthold of Nuremberg's Transformation of Hrabanus Maurus's Poems in Praise of the Cross, published in 2020, to study in detail the visual and intellectual means mobilized to compose such diagrams. . . . Nothing escapes the author: the alternation of inks in the concentric circles, the interlocking proportions between the rectangles and the squares, the plastic treatment of angels and other figurative images at the heart of the diagrams. For each image, Hamburger takes stock of the content of the composition, its form and its possible links with other contemporary diagrams. It also offers at the end of the volume a description and a partial edition of Berthold's text. But probably the most important contribution of Diagramming Devotion lies in the analysis of what Berthold's Treatise on the Cross and Virgin Mary tell us about the graphic rationality at work in the last third of the Middle Ages. . . . The excellent book by Jeffrey Hamburger is thus placed in the long term of the history of the means of information and of logic. It constitutes a monumental reflection on the articulation between the contemporary categories of semiotics (and their uses of the diagram) and the devices of production and visualization of knowledge in the Middle Ages."

“Hamburger has accomplished a rare feat among twenty-first-century scholars by bringing unknown illuminated manuscripts to light. Acutely sensitive to subtle changes made in Berthold’s revision, he locates the novelties in their theological context; and, moving from image to word and from diagrams to theological arguments, Hamburger provides a rich compendium of medieval thought and offers a subtle and complicated analysis of the late thirteenth-century version that engages the most important intellectual issues of the day. Like its subject, Diagramming Devotion is at once profoundly learned and inspiringly original.”

“Hamburger impressively combines the historical analysis of medieval diagrams with a discussion of modern and contemporary notions of diagrams and the diagrammatic. Diagramming Devotion presents a whole range of fascinating new visual material and broadens the art historical canon in showing how closely diagrammatic and figural modes were linked in medieval visual culture. Hamburger not only demonstrates a profound knowledge of the diagrammatic in medieval imagery but also explores its many multidisciplinary aspects. In considering the personal, emotional, and sometimes even irrational dimensions of diagrams, Hamburger opens new ways to think about the role of diagrams in medieval art and thought. Diagraming Devotion is elegantly written, a pleasure to read, and an important contribution to the field of medieval art history.”

“Hamburger’s deeply learned study highlights the significance of Berthold’s endeavor, offering a pathbreaking argument about the diagrammatic disposition of medieval culture. In daring and fruitful juxtapositions, Hamburger shows how medieval and modern times share a strong reliance on diagrams, examining the expressive powers of their relational and processual modes and their claims to making truth in multiple areas of human inquiry. Within a comprehensive interpretative framework, Hamburger’s exploration of numerous manuscripts and lavish illustrations extracts new layers of meaning. His analysis sustains a consistently brilliant commentary on the implications of the medieval diagram as a meditational medium, animated by a poignant desire to demonstrate, and not simply to represent, the truth of salvation history.”

"Hamburger’s brilliant analysis explodes with insights generated by his provocative reach across both medieval and modern and among academic disciplines. The book charts new paths for the interpretation of medieval art, and its argument for the centrality of the diagrammatic in the thought as well as artwork of medieval Europe, as in modern fields, is utterly compelling. Not only art historians but also historians of theology, philosophy, natural science, and mathematics will find much of interest in this enthralling study."