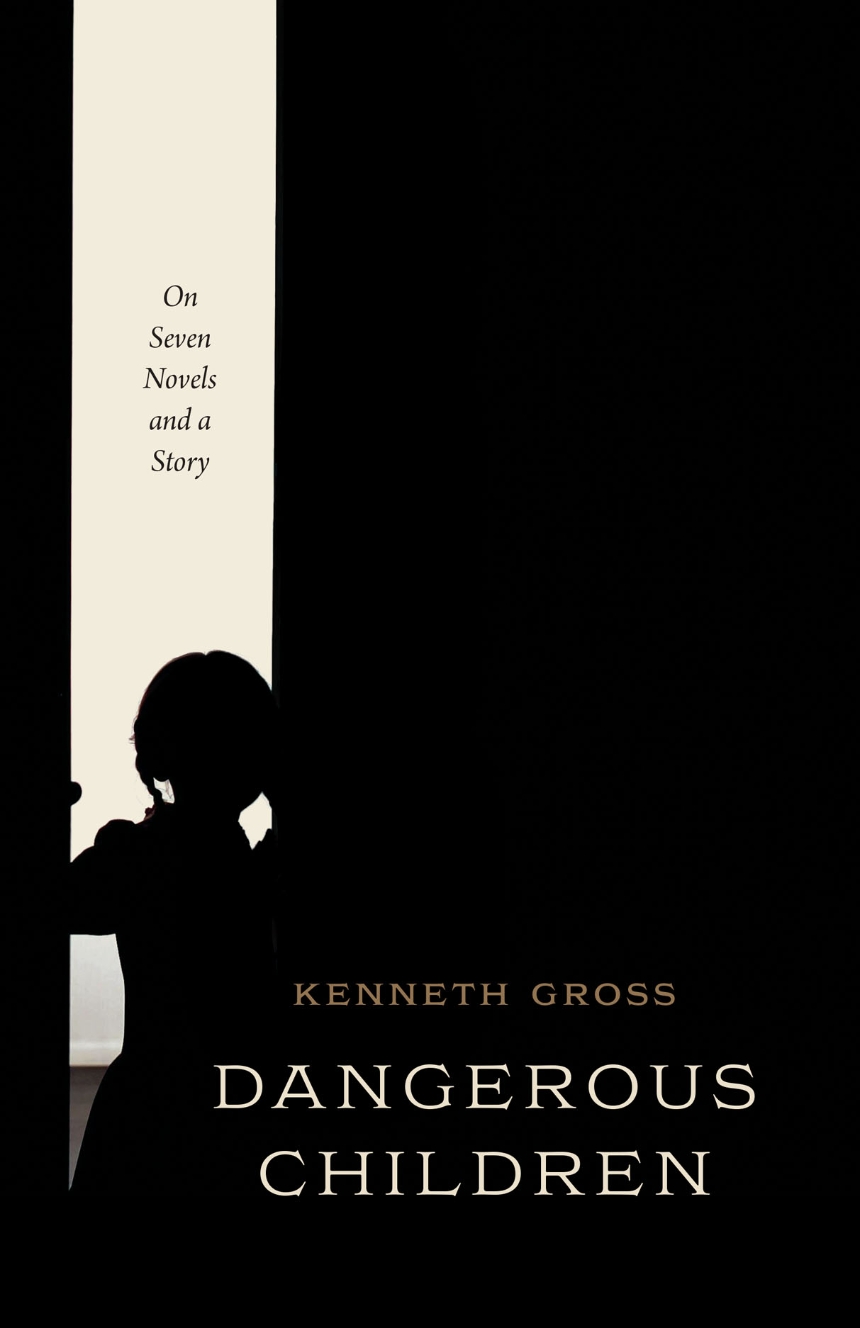 On Seven Novels and a Story

On Seven Novels and a Story

Gross explores our complex fascination with uncanny children in works of fiction.

Ranging from Victorian to modern works—Lewis Carroll’s Alice in Wonderland, Carlo Collodi’s Pinocchio, Henry James’s What Maisie Knew, J. M. Barrie’s Peter and Wendy, Franz Kafka’s “The Cares of a Family Man,” Richard Hughes’s A High Wind in Jamaica, Elizabeth Bowen’s The Death of the Heart, and Vladimir Nabokov’s Lolita—Kenneth Gross’s book delves into stories that center around the figure of a strange and dangerous child.

Whether written for adults or child readers, or both at once, these stories all show us odd, even frightening visions of innocence. We see these children’s uncanny powers of speech, knowledge, and play, as well as their nonsense and violence. And, in the tales, these child-lives keep changing shape. These are children who are often endangered as much as dangerous, haunted as well as haunting. They speak for lost and unknown childhoods. In looking at these narratives, Gross traces the reader’s thrill of companionship with these unpredictable, often solitary creatures—children curious about the adult world, who while not accommodating its rules, fall into ever more troubling conversations with adult fears and desires. This book asks how such imaginary children, objects of wonder, challenge our ways of seeing the world, our measures of innocence and experience, and our understanding of time and memory.

"An original spin on literary criticism."

“A series of startling insights and evocations, Dangerous Children reveals just how uncanny and enigmatic children can be. In eight really quite brilliantly subtle chapters Gross shows us, improbably, that we have never really been curious enough about childhood.”

Adam Phillips, author of On Getting Better

“This exhilarating, risk-taking study draws together children figured in disparate writers and transfigures our reading of them. Lewis Carroll and Kafka, Elizabeth Bowen and Richard Hughes, Nabokov and Henry James, Collodi and Barrie, all generate dangerous children who live between play and death. Gross brilliantly conveys their mystery.”

“Gross doesn’t call his children dangerous for nothing. From Carroll’s Alice to Collodi’s Pinocchio and Nabokov’s Lolita, they are all fictional and therefore cannot die. They are also especially well equipped, in this subtle analysis, to suffer and explore the dangers of innocence entangled in knowledge. As the text reminds us, it was very clear to the heroine of What Maisie Knew that she was not supposed to know things. The book is a wonderful read on many accounts, not least because its apparently pastoral topic becomes so eerie.”

To call them by name, child by child: Alice, Pinocchio, Maisie, Peter, Odradek, Emily, Portia, Lolita. Some of these names can conjure up an entire world. All become signs of a larger life, a life unknown and familiar.

I look here at the ways that certain writers have imagined childhood. I’m curious about how these imagined children catch hold of us, often in scary or painful fashion. What do these dangerous children have to do with what we are and were? What do they ask of me? What is my part in these children?

The writings I’ve focused on are Lewis Carroll’s Alice in Wonderland (1865) and Through the Looking-Glass (1871), Carlo Collodi’s Pinocchio (1883), Henry James’s What Maisie Knew (1897), J. M. Barrie’s Peter and Wendy (1911), Franz Kafka’s “The Cares of a Family Man” (1919), Richard Hughes’s A High Wind in Jamaica (1929), Elizabeth Bowen’s The Death of the Heart (1938), and Vladimir Nabokov’s Lolita (1955). The fascination of these stories’ imagined children lies in their unsettling energy, their playfulness, their willfulness, their capacity for survival and transformation, their bluntness and violence. It lies in their unpredictability, in a fierce curiosity about the adult world joined with a refusal to readily accommodate to its rules.

These dream children invade our milder dreams of childhood. They enlarge and test our inherited pictures of innocence, and its loss. They make innocence at home within unexpected forms of knowledge, pleasure, and craft. They create paradoxical alliances between weakness and strength, seriousness and jest, sense and nonsense, the human and the nonhuman.

These children’s voices—by turns wounded, comic, questioning, ecstatic, and cruel—can summon a world of listeners. They may speak with terrible plainness. Or their words may sound unrelatable, half-articulate, not like words at all. (“Learning to speak, the child has either too few or too many words.”) Ordinary language may struggle to keep up with them. All of these children are storytellers, but their way with stories is often at odds with that of the adults around them. The children often fall into silence, or into conversations that drive them, and those they’re talking with, a little mad.

These children are given bodies that move with strange energy, that fall weightlessly, run without tiring, or suddenly fly up, bodies that burrow, dance, float, stretch out or collapse upon themselves, survive burning and drowning, sometimes starving, sometimes filling themselves with the most uncanny food.

They find unexpected occasions for play, they find games in places where games shouldn’t be, games whose rules keep changing, or that change what we think of as the aims of play, that shift the grounds of winning and losing, taking sides, what it means to cheat. Games that are violent or that do violence to games, played on a broken or a twisted playing field, or in places where games are prohibited, with equipment that has a life of its own— hedgehogs for balls, flamingoes for mallets. Games that can only be lost, you may think, even if “everybody has won, and all must have prizes.” Such play can intensify the children’s solitude, or draw them into a more anarchic community.

Theirs is a schoolroom that is no longer a schoolroom. These children are caught in schemes of education gone awry, deformed, abrupt, impoverished, or insane, in lessons more wildly free, a schooling that asks for more eccentric, more dangerous teachers, a schooling that feeds
minds unsettlingly precocious or luminously obtuse.

All of them become wanderers, nomads, explorers, forced or willing exiles, sometimes squatters, possessed of at best uncertain and temporary homes.They become companions of animals, beasts ordinary and unheard of, odd, silly, sad, mad, and wise, some with human faces, some given the power to speak—rabbit, pig, donkey, bear, griffin, cat, caterpillar, cricket, mouse, monkey, and goat, minnows and worms and cockroaches.
Their books tell odder stories about the ways that children share their lives with made things, with toys and dolls, with shoes, candles, books, teacups, watches, thimbles, and bottles. Often undergoing metamorphosis, animation and deanimation, these things are the children’s riches and their poverty, generous and desperate tools for probing the world, gifts that can yet be charged with violence. One of my children makes her imaginary babies out of broken rope ends and iron spikes.

You often can’t fix their ages. They can seem preternaturally old, archaic creatures, child-adults, or children suspended in time, who age, if at all, according to a line of days you cannot count or count on.

These children keep company with the dead, they are creatures who return to us out of a distant past, out of a dead life, a dead and unknown childhood, secretive, hard to lay hold of. They can seem like ghosts who need to be laid to rest or banished, or like ghosts we must welcome, make a home for, shades with whom we need to take up stranger conversations.

They do not die. They offer an unsettling vision of continuance, even immortality, a vision of an early life that also resists time, stops time or overgoes it, a child life killed, mourned, and continually resurrected. (“And who then was ever cured of his childhood?” asks the poet Lucie Delarue-Mardrus.) By this they draw us into a richer sense of our own life in time.

These fictive children, again, ask us to think differently about innocence, how innocence gets lost or stays in place, how it takes up changed forms. In their speech and gestures, their sensory worlds, their pleasures and fears, their games, their acts of violence, they test simpler ideas of innocence. Theirs is an eroticism that is both distant from the eros of an adult world and perilously close. They thrust us back into stranger beginnings and stranger continuities, aspects of childhood that subsist within us, that we might have difficulty remembering, or might not want to remember, and can now only imagine. There is more in these children than any adult has been able to keep. They may show us, as Gaston Bachelard writes, “moments in childhood when every child is the astonishing being, the being who realizes the astonishment of being.”They invite us to open ourselves to invisible, forbidden, unfinished, or unlived childhoods, impossible childhoods, childhoods “insolent and remote.” They speak of a past that might give us the face of an unknown future. As with the wildly various images of play in Jan Bruegel’s painting Children’s Games, the play of these children can hold within itself “the present, the almost-past, the not-yet, the about-to-be, the held-in-abeyance, the imagined-away, or the permanently translated.”